21 Days in Normandy by Angelo Caravaggio

This was the last review I did. 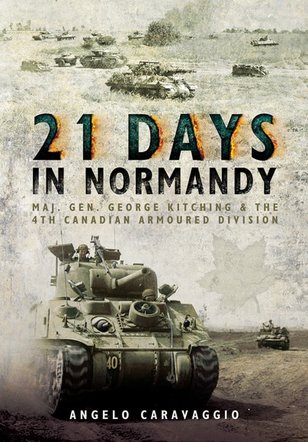 21 Days in Normandy re-evaluates the role played by the 4th Canadian Armoured Division in Normandy and especially its commander, Major General George Kitching.

The division was in Normandy for approximately three weeks and in that time had taken part in the relief of the 3rd Canadian Infantry Division. The 4th Canadian also played an active part in Operation Totalize (punching through German defences to the south of Caen) and Operation Tractable (the capture of the French town of Falaise) trapping the retreating Army Group B of the Wehrmacht.

The Canadian and Polish attempts to close the Falaise gap were fruitless. Thousands of Germans escaped through a narrow opening several hundred yards wide, to fight another day, albeit without most of their equipment. The gap was finally closed on the 21st-23rd August 1944, but not before aspersions of failure had been cast on the Canadians for not closing it quicker. The scapegoat was Major Kitching - relieved of his command for advancing too slowly.

Considering this book is based on some major battles in the Normandy campaign, there is no action at all. The author comes at the subject from a completely different angle. Caravaggio discusses the structure of command within a combat force, the training they undertook prior to deployment and how this impacted their ability to perform in an actual battle.

The author also looks at the relationships between the different levels within the command structure from top to bottom. All these little things combine together to build a picture supporting the authors premise. Perhaps Kitching should not be the one to shoulder the blame for what was classed a below par performance and that there were extenuating circumstances. The book also questions the assumption that Operation Tractable could have achieved a better outcome - of course it could have. It goes without saying that any military operation carried out could have a better conclusion. With hindsight you are afforded a glimpse at what might have been. However, for a fresh force, new into theatre and having been thrown up against a well dug in enemy in ideal defensive terrain, was this really an under performance or had they performed to the best of their ability? Caravaggio asks all these questions.

This book is meticulously researched. Although being rather dry at times - there is barely a paragraph goes by that doesn't hit you with a fact or another piece of knowledge that you weren't aware off. If you're interested in the contact, command and control functions of a combat division, this title is for you.

I really enjoyed reading '21 Days in Normandy'. It is so different from the majority of books dealing with divisions fighting at Normandy in 1944. The author set out with the mission of re-evaluating and really getting into the nuts and bolts of the 4th Canadian Armoured Division. With this book he was completely successful.

As for the question of did the Canadians underperform? I suppose in the end its all down to perception. You will have to read the book and make your own decision.

Good review
Maybe this is a publisher FGM can get review copies from (for the Patreon draw as mentioned in another thread), especially if you post them here and a link to the publisher.