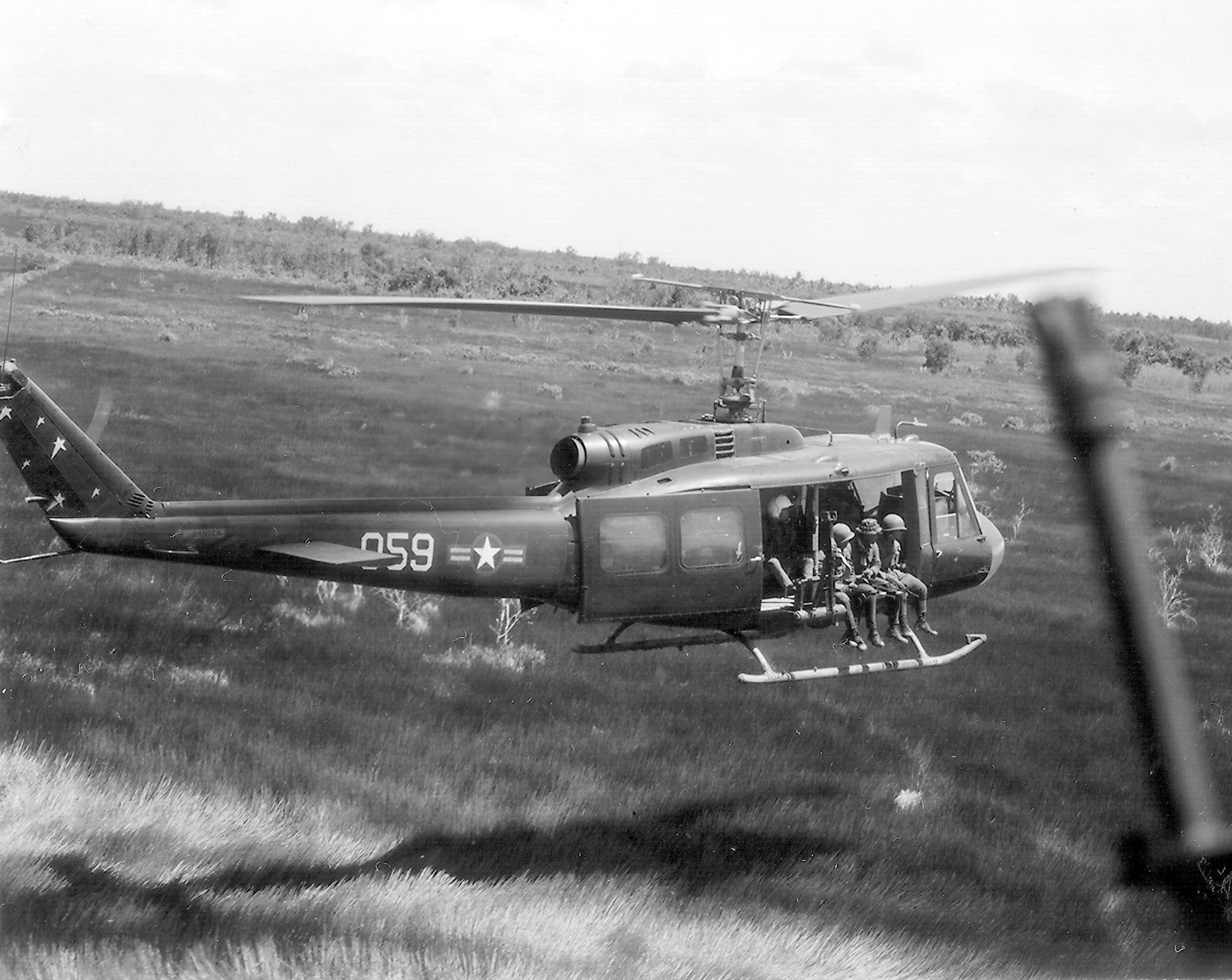 As the jeep became the symbol of the WW2 soldier, the UH-1 Iroquois helicopter, commonly known as the Huey, symbolized aircrews of all four services in Vietnam.

The Huey was the workhorse helicopter of the war with a variety of missions, including air assault, armed patrol and escort, command and control, troop and cargo transport, combat reconnaissance support, amphibious assault, light utility missions, and medical evacuation.

About 7,000 of 16,000 Hueys produced since the 1950s were flown in Southeast Asia. While the Huey earned a reputation for its adaptability and versatility, it also proved to be vulnerable. The Army lost almost 2,250 helicopters to enemy fire during the war. 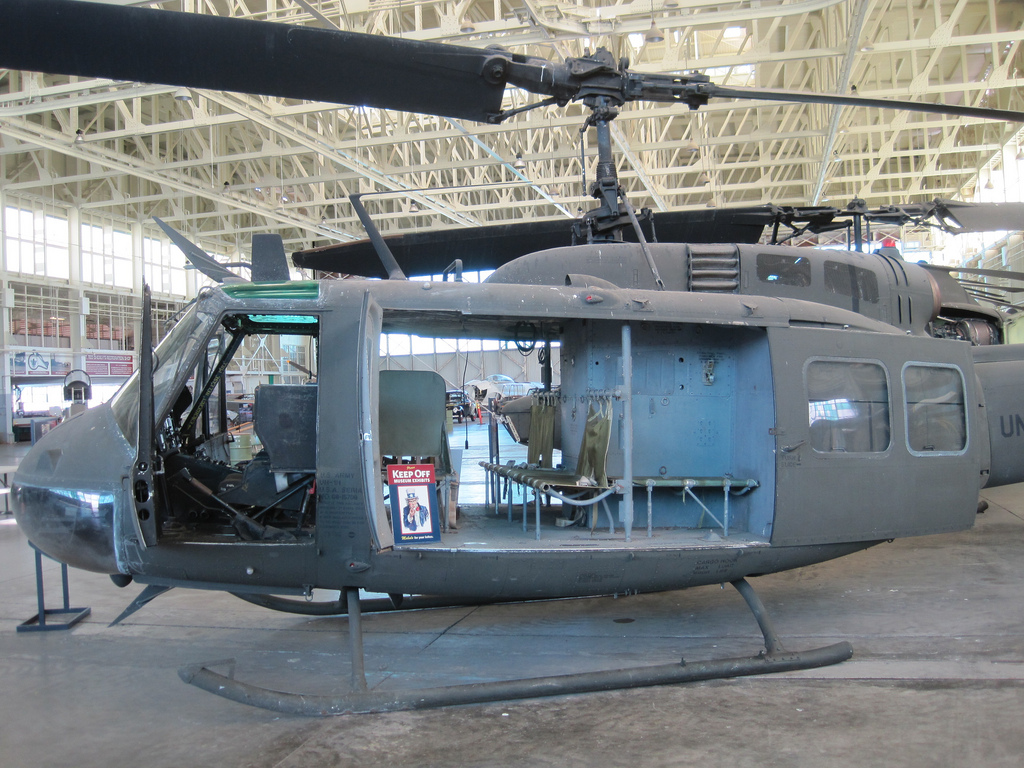 The requirements of the US Army was to have a multi-purpose helicopter which could serve to evacuate the injured from the front line, an experience greatly felt during the Korean War with the transportation from mobile MASH units to hospitals. This led the BELL Company to come up with a proposal, known as MODEL 204 which ended up as the army's choice during the course of 1955.

The following nine UH-l helicopters incorporated changes to the original design such as a jet engine with 860 horsepower and canvas seats to transport six people.

The first nine pre-production "HU-1 helicopters "HU" Stood for " Helicopter, Utility" And the "HU-1 designation quickly led to the nickname that would be famous: "Huey"

"Huey", a name which the manufacturer engraved on the craft's command controls, the supply of the first UH-1 A's began on the 30th of June 1959, and were completed in March 1961. Later they received the nicknames, SLICK for the troop carrier, HOG for the gunship version and IROQUOIS for the multi-purpose H model.

The A model machines were the first to be sent to Vietnam as a part of the Tactical Transportation Company which arrived at Saigon airport in Tan Son Nhut at the beginning of 1963 to facilitate troop deployment.

Primary Armament:
Typical armament included two M-60D machine guns on fixed door mounts manned by the Crew Chief on the left and a Door Gunner on the right. The M-60D is a 7.62mm NATO caliber weapon with a cyclic rate of fire of 600 to 700 rounds per minute. The large cans below the M-60’s held roughly 2,000 rounds of linked 7.62mm ammunition and were a typical field modification replacing the authorized can which held 500 rounds.

Secondary Armament:
Each Crew Chief and Door Gunner also carried a secondary weapon, usually an M-16 rifle but sometimes more exotic types. Because pilots were not issued M-16’s, they often carried other unauthorized weapons slung over their armored seats for personal protection. Crew Chiefs and Door Gunners always carried colored smoke grenades, often as you see them here on the seat posts. These were used to mark targets for the Gunships when receiving hostile fire or to mark landing zones (LZ’s).

Body Armor
All aircrew were issued body armor, jokingly referred to as “chicken plates”. If a Crew Chief or Door Gunner chose not to wear it, the chicken plate was often stowed under his seat for protection from enemy weapons fire from below.

Directing the landing of a Huey ambulance Operation Desert Shield and Desert Storm.

An Iroquois over a two Centurion tank patrol during the Vietnam War, 1968. 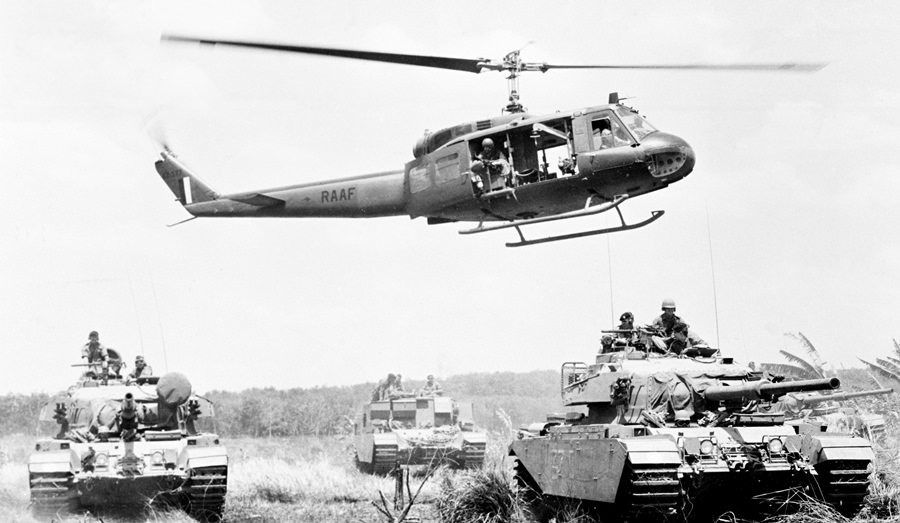 Hey, Louis, didn´t You mean a three Centurion tank patrol? I at least see three tanks on the picture.

I just do not have my glasses on, Ralf

Ah, that´s it! Already thought You would have a black-and-white-weakness so as some man have a red-green-weakness... especially on traffic lights.