This is a small campaign what orientates itself a bit on RAW (RATS & WOLFES CAMPAIGN) and the famous Battles Isle game. The root idea is to conquer isles. There are 12 isles to battle over and the players have to fight for every single isle. If an isle is conquered it becomes part of the imperium of the winning player but can taken back by the opponent in another battle if he has opportunity and ressources on his side. I, as the Campaign Leader, decide what happens between the battles and if captured units get in Your ranks or not and so on. The story of the war is my will and decision only. You commanders have only to do the battles. That should speed up the advance of the battles/war a good degree.
All players start as aggressors and have to fight the neutral party - what is me. After defeating my forces the conquered isles build Your empire´s first colony/state/ country. Every isle what is attacked the first time is holded by the neutral party. After first conquering there is no neutral party anymore on this land. If all isles are conquered by the players the coming battles are only between the players yet. Winning side is who conquers all isles. If a player is absorbed by the neutral forces he can restart so long as his side exists but all his records are gone and he starts from scratch. Every side has its general army branches. That are infantry, mechanized and armored.

The commanders are parted in the Alliance (and there into Blue Army and Red Army) - and the Volkstein commanders (Army Green and Army Gold). I limit the players all in all to 4 players. That is because of my restricted health and time. If there should be more players they have to be at the ready on the replacement slots. Blue Army will be a substitute for western military. There will be western tanks and vehicles so far as possible and the infantry is divided in Army and Marines. Red Army is more eastern military and follows the CMBB standard. Army Green is in general Heer. Army Gold in general Luftwaffe & SS. But attention - this is only to have different armies (uniforms). That doesn´t mean automatically You get better weapons or experience if You be a SS or Luftwaffe commander. The isles You have to conquer are positioned as a square of 3 x 4 isles. Every commander has to attack one of the corner isles and fight his way through to the inner 2 isles. You can only "jump" one isles at the time and only if the isle You want to start from is Yours.

The size has nothing to do with economy or what weapons You get etc. Anyway the story is made by me and You have only to fight and from time to time to make a decision for opportunities I provide if I think it is fitting. For example it could be there is a new development in weaponry. Then it could be I give You a prototype (similar to MBC in its early stage). But it could be You mustn´t loose this one. And You can only say Yes or No if You want the prototype nevertheless. Or You could get a special formation but have to part from another unit already in use with Your troops. The experience system is only general - means if You win more as You loose You will find a few more regulars, veterans or even cracks in Your ranks. But it will not be as in RAW where I calculate every single unit.
If this one goes well I will take over a suggestion of comrade STOFFEL to implement umpires who will lead their own fights of 4 players each. I would make it public at theBlitz, WEBOB and maybe one or two other sites yet. So we would get more players together. All of You should be aware that it is a longer time campaign since You and Your opponents will be able to re-capture/-conquer isles.

A new feature, because we play with only 12 maps instead of 16, is if two players attack the same isle to the same time, and if the neutral party still exists there, the players battle it out and the remainings of the winner get attacked by the neutral party then. Should the winner lose now against the Neutrals the isle stays neutral. So long as it isn´t captured by a player.


RULES (selection)
Campaign Leader is always right!!!
1. Every isle except the inner isles is worth 10 Slots for the Axis powers and 12 for the Allies powers. The inner islses are double the value of a standard isle.
2. Slots are the value what You need to build new units and troops of the current tech level. Every unit/troops has a specific slot value what is subtracted from the isle slot amount if used to build that unit/troops.
3. All players start with tech level 1. The tech level evolves during the campaign.
4. The first battle the Allies are very slightly weaker in tanks.
5. Neutral´s tech level evolves in the same manner as for the Main Powers.
6. The four Main Parties start with an complete "Army" each what consists of about one batallion infantry, a few tanks and vehicles plus support units. Most are on regular experience level.
7. Neutral armies have always only 2/3 of the main powers strength and are most of the time on green experience level.
8. Even though You have an entire army to Your use most of the time You can´t use the full amount. The amount of troops and units You can use depends on the battle/scenario (story).
9. On the inner Isles You can use full armies if You want so.
10. If You have conquered an isle a garrison gets established what is about a company of infantry plus a few other units.
11. Regular army units and troops You don´t use in battle will always stay on the nearest isle. So on that isle You will always have garrison and the remaining army units.
12. Garrisons don´t participate in battles except their isle is attacked.
13. For a longer time every standard isle has only place for 2/3 of a full army. That means after You have conquered an isle the excess units/troops have to go to another isle of Yours or attack another island.
14. Garrisons will automatically disbanded if You put 2/3 of an army on an standard isle. They will get reactivated if Your regulars go into battle or there is room again to fill the 2/3 of an army rule.
15. Garrisons what are beaten will not re-appear should the attacker not be able to take the isle (Draw but garrison is killed). The isle has to get re-conquered for a new garrison. 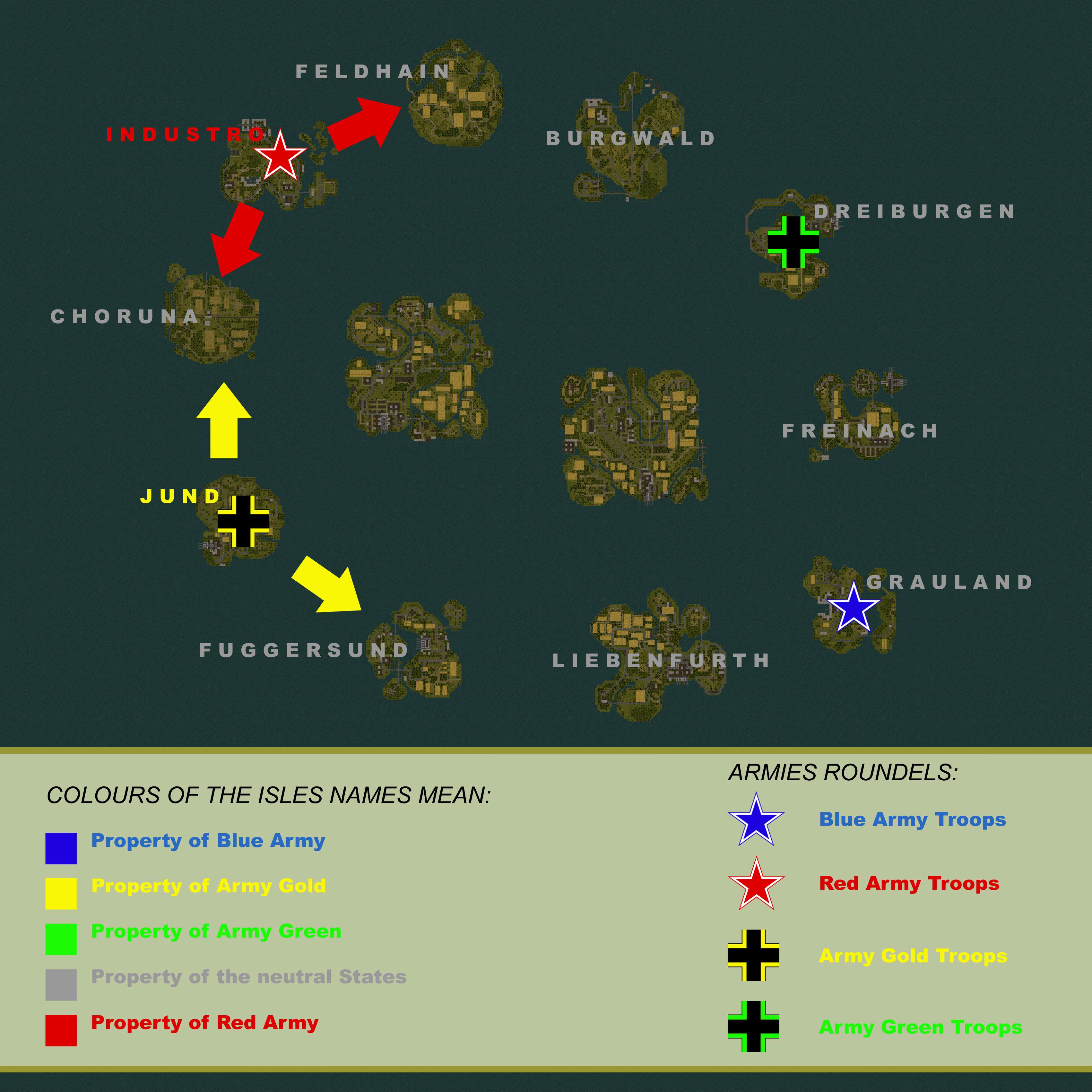 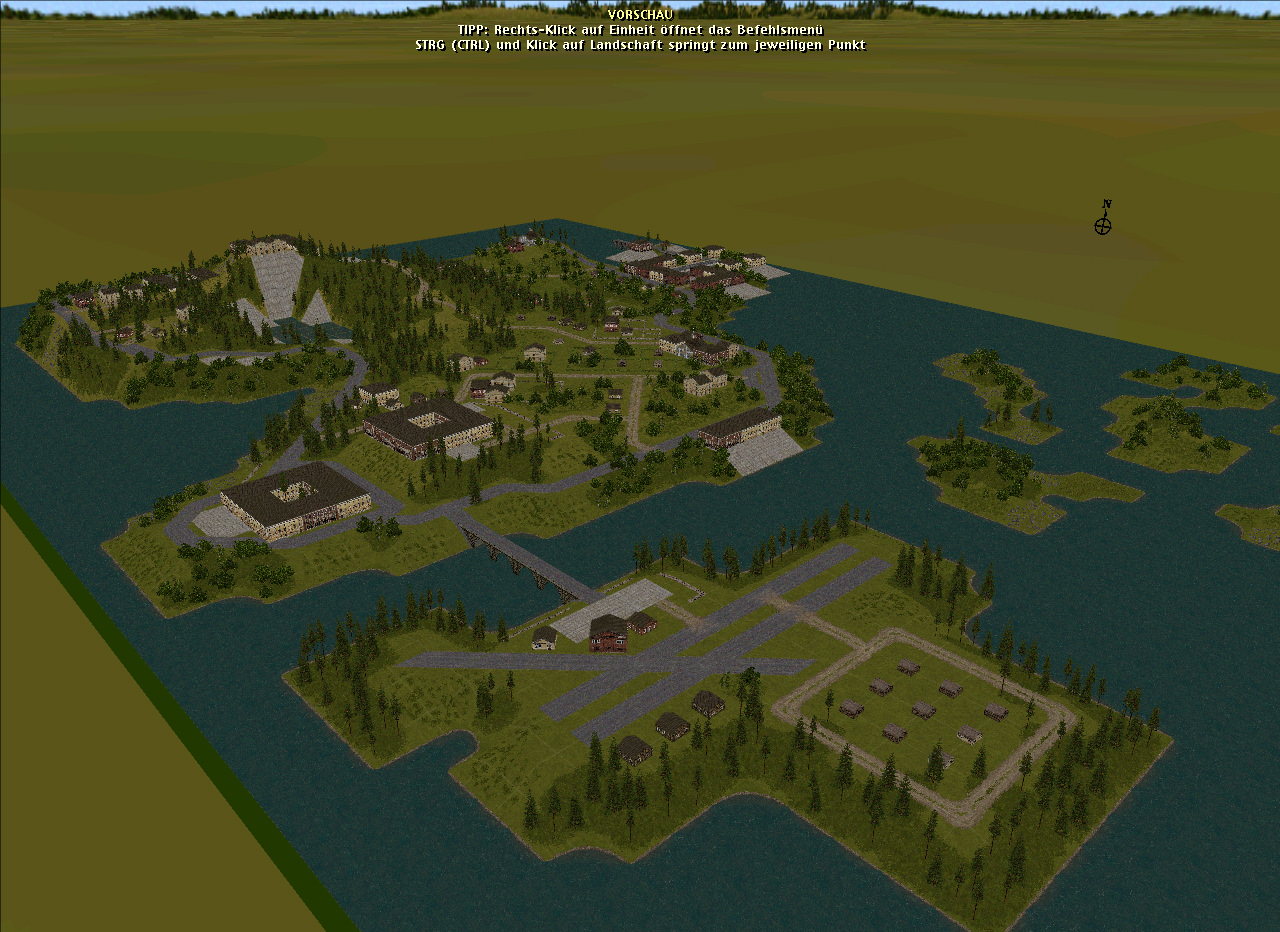 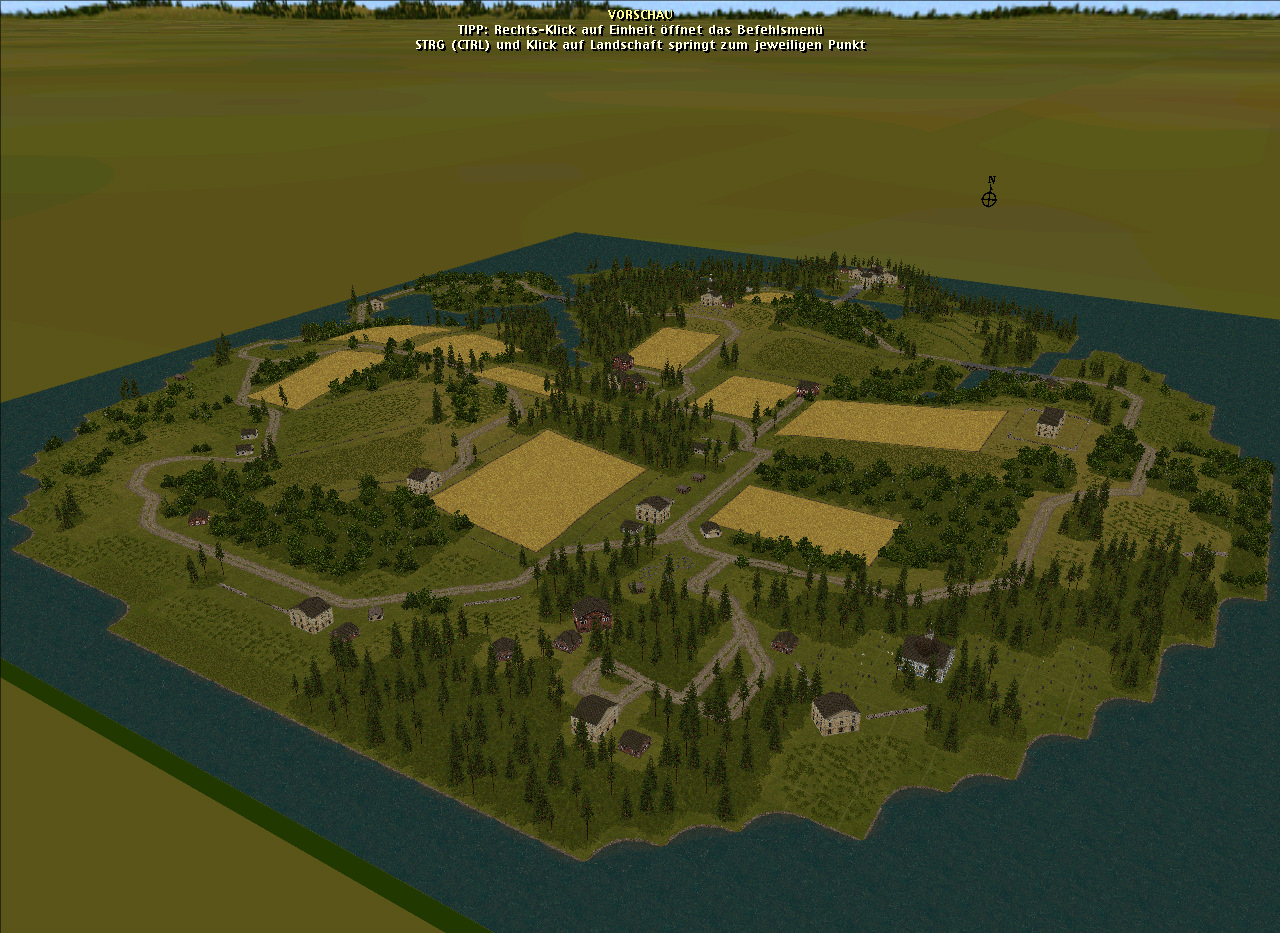 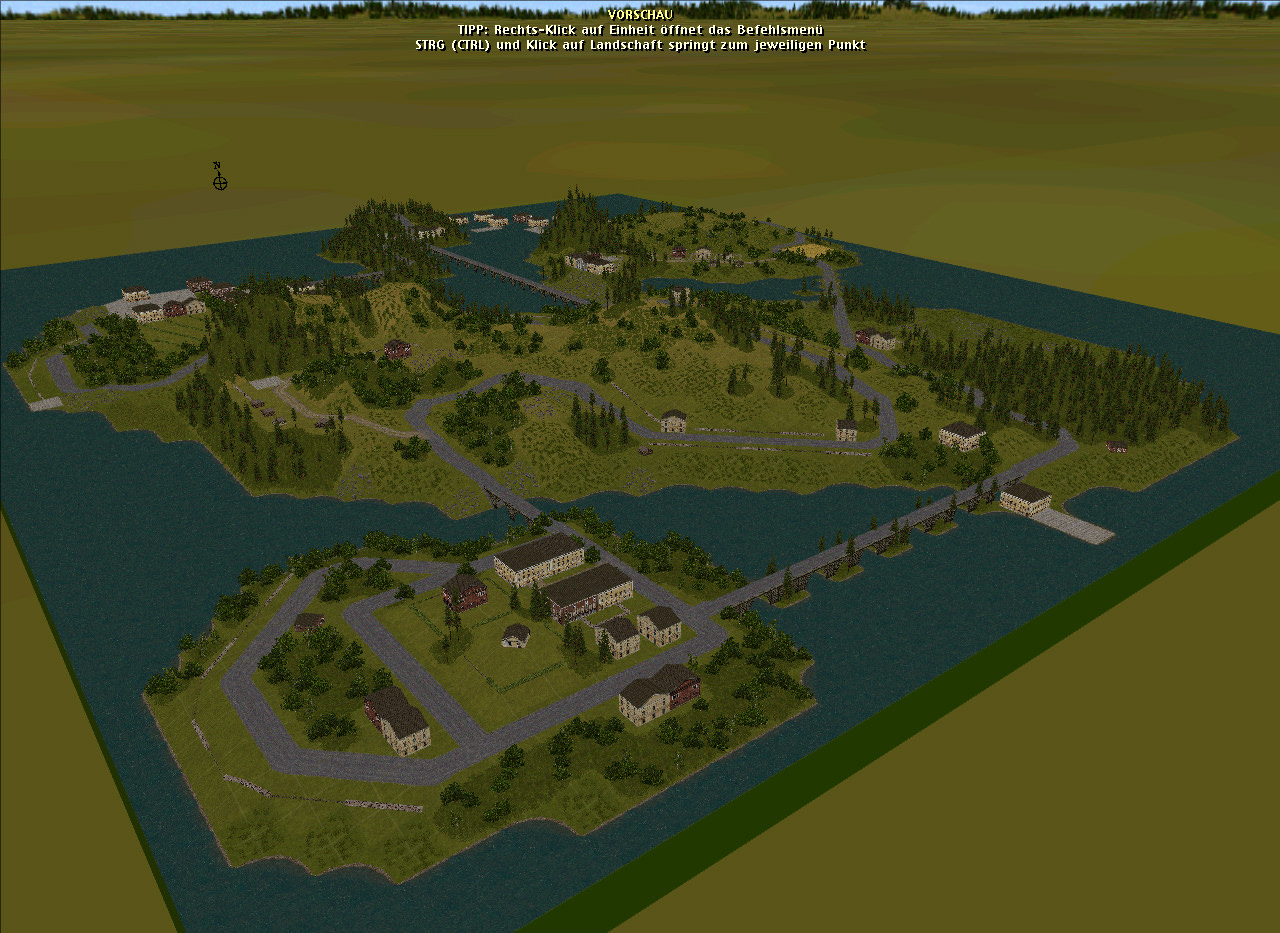 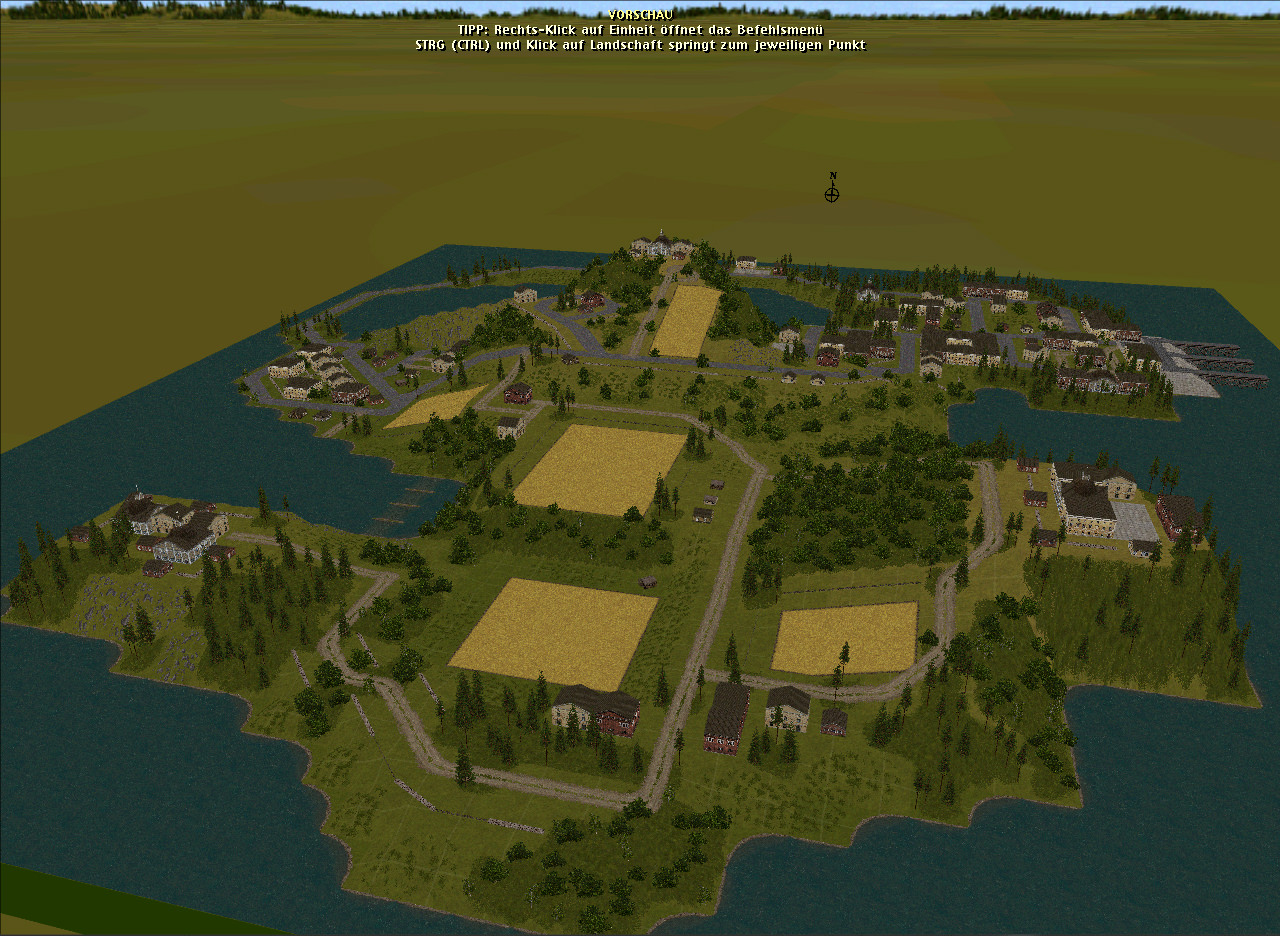 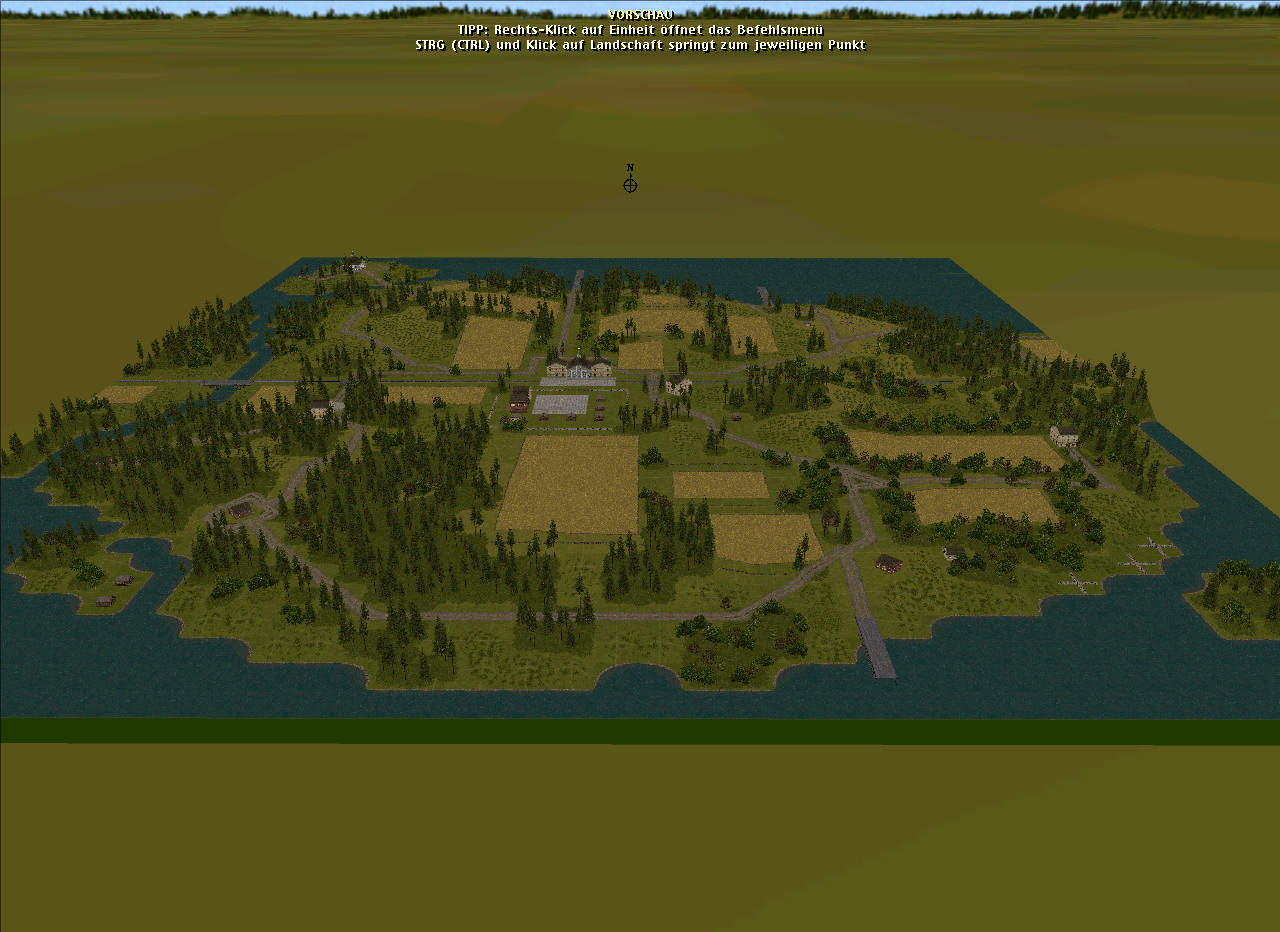 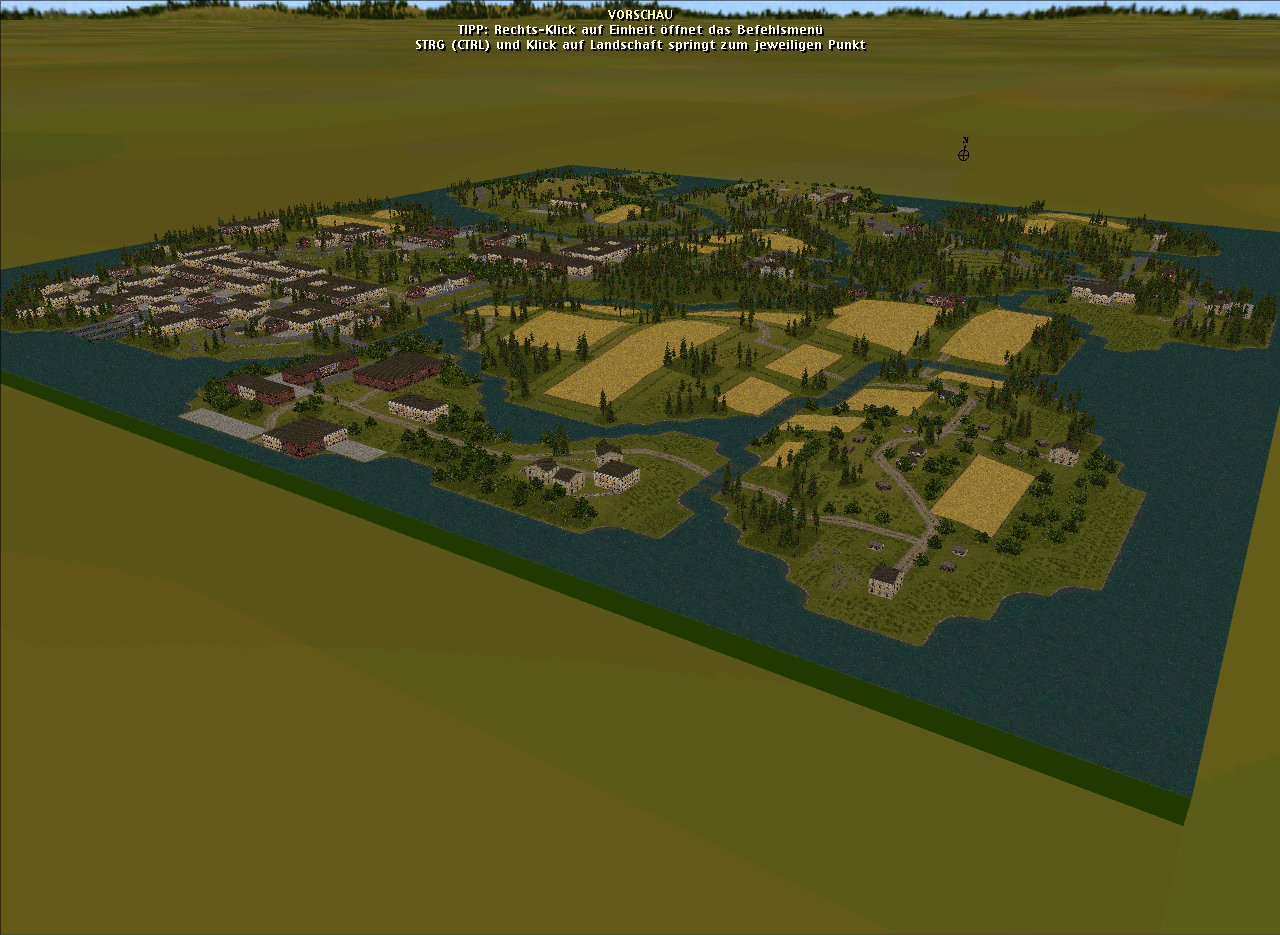 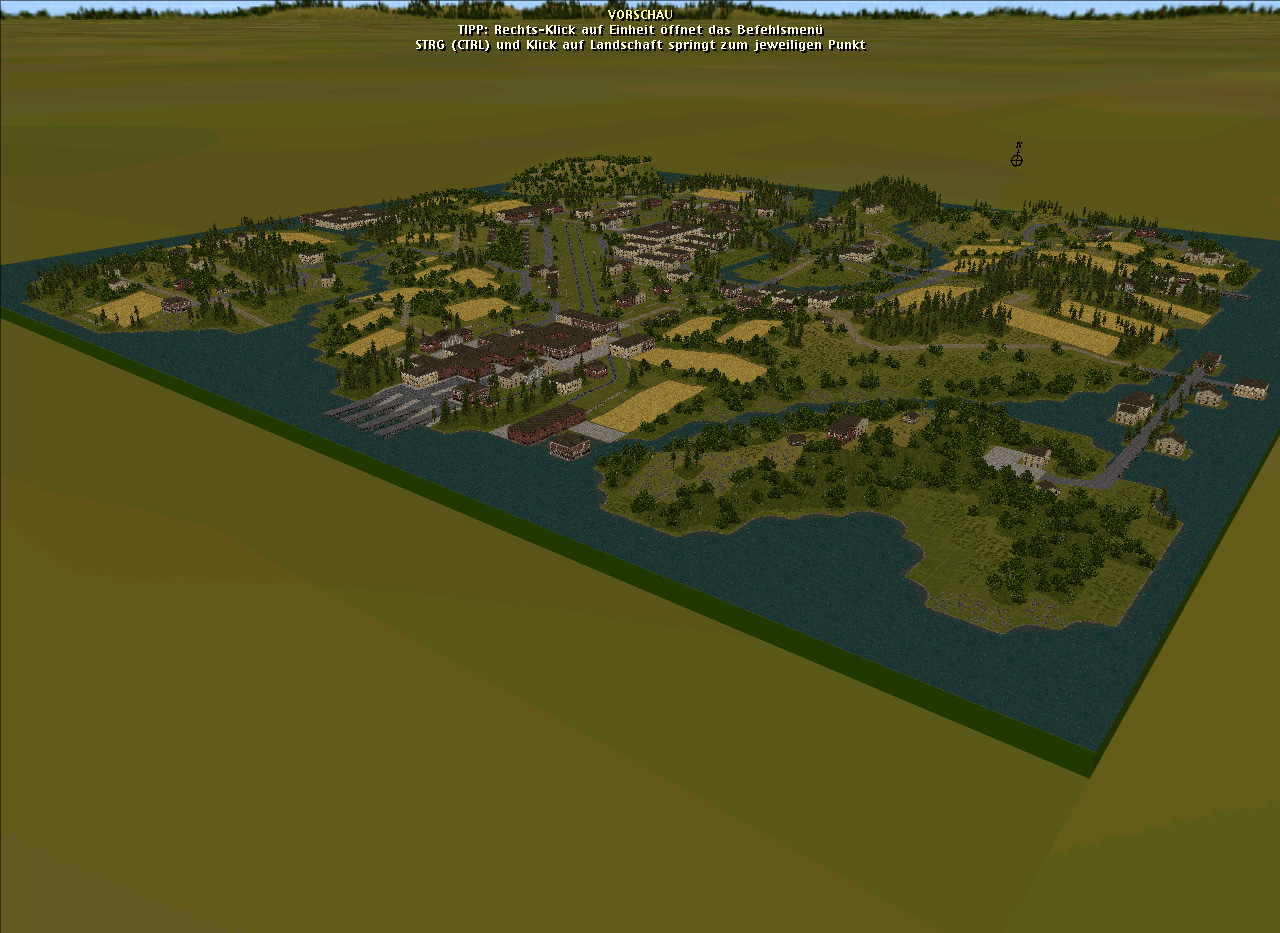 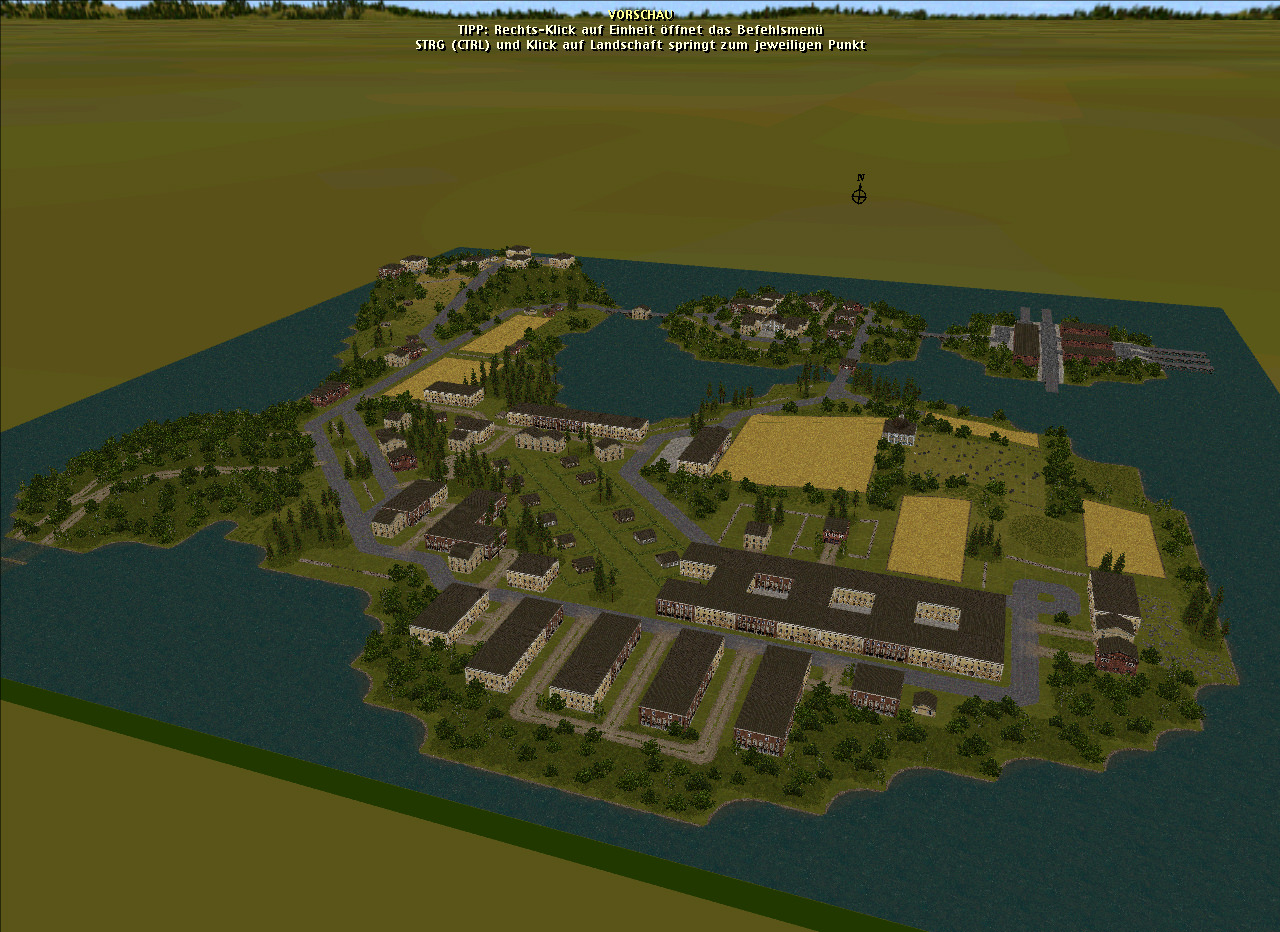 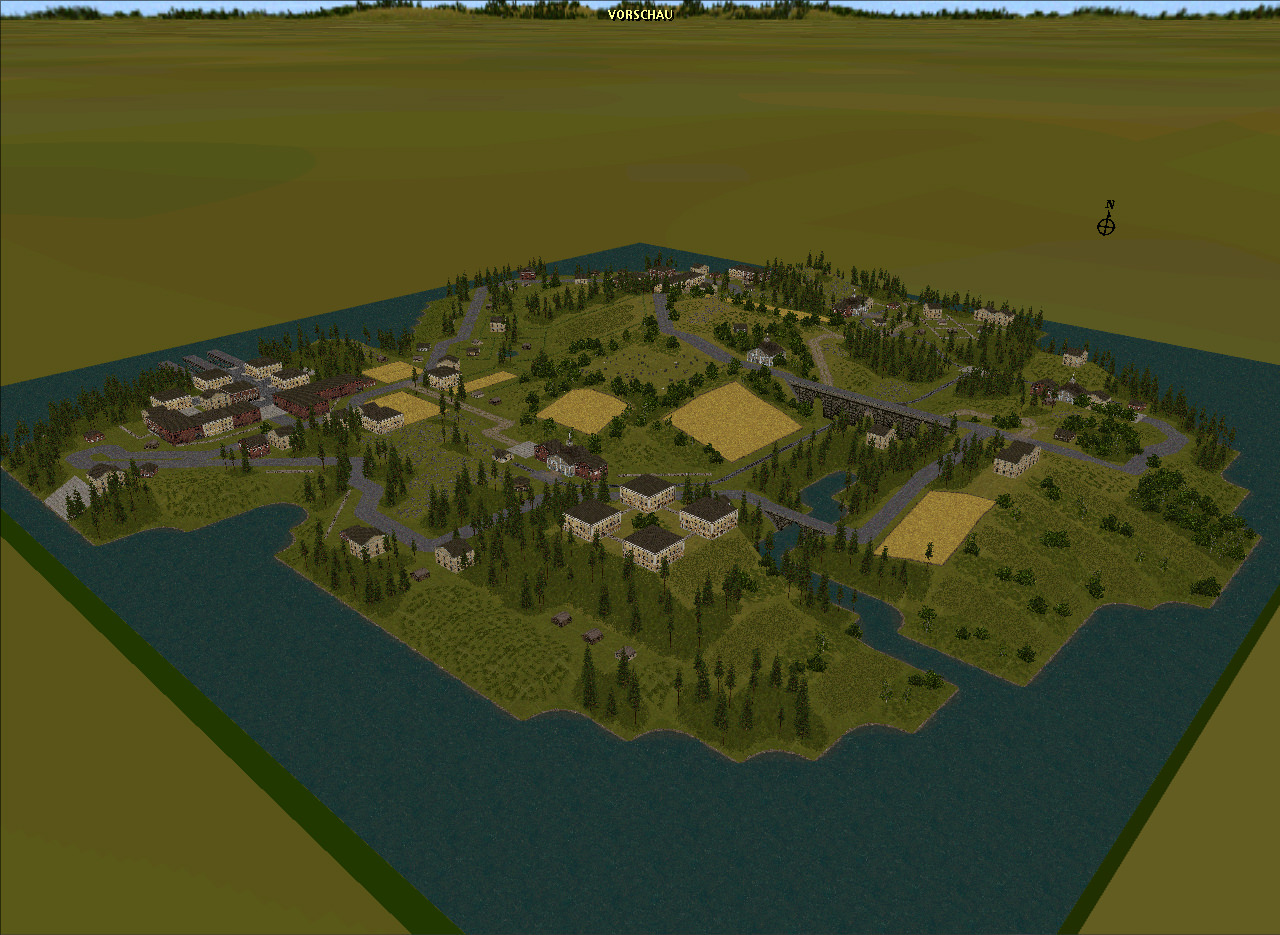 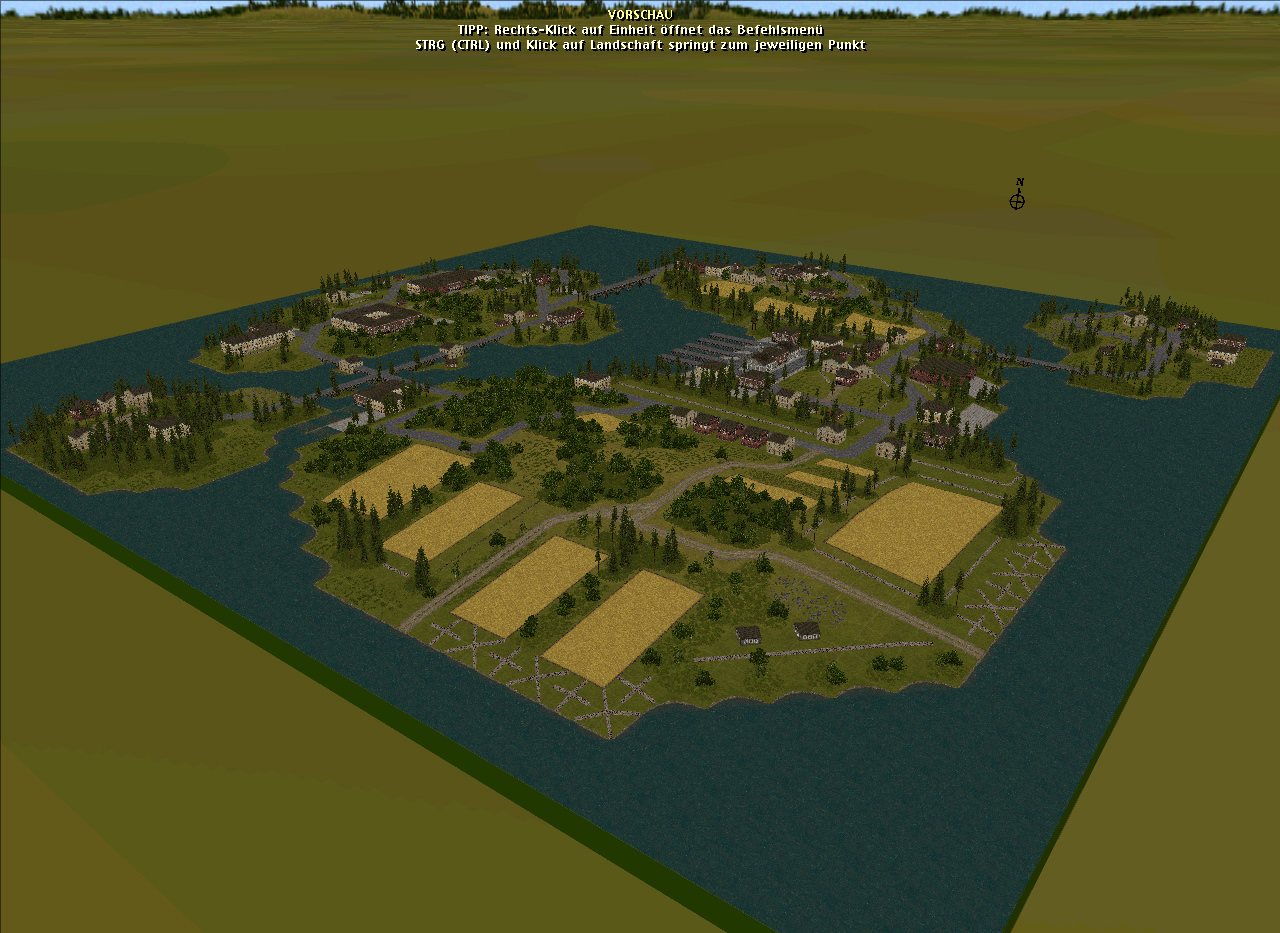 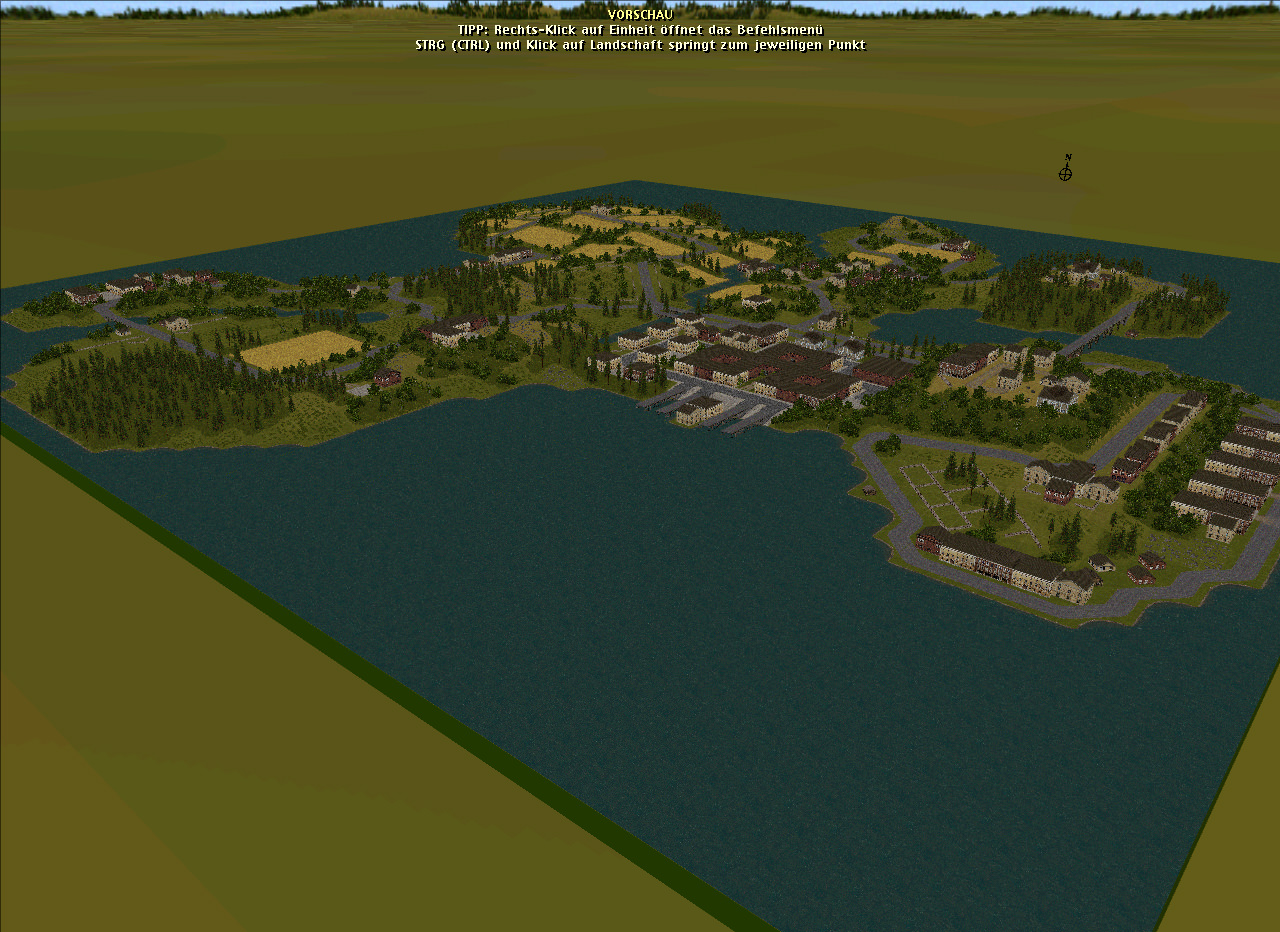 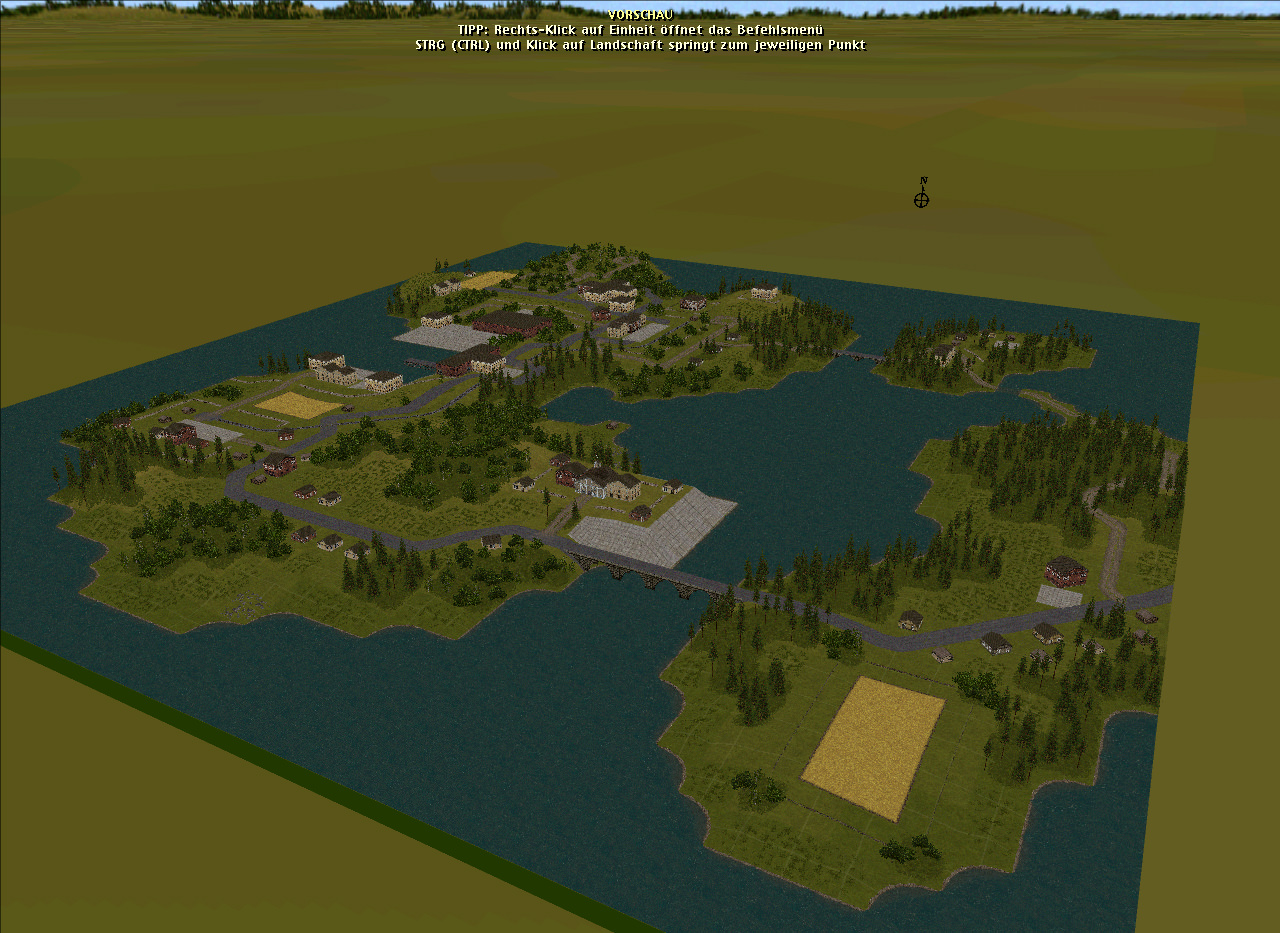 Battle against Uffz.BRAUN is over. He conquered Downtown. Commander SKOOKIN did a really good job and has almost overrun my forces. Commander OWL did some really nice moves - especially using my attack position from the last battle for his own attack in the current battle. Last two battles are almost over as well.
If all battles are finished I will take a rest from gaming to do some RL things I can´t postpone any longer. One of these things is to redo my PC/Software. The others are mostly medical and educational. So it can be I´ll need some time. A message goes out to all BIC players via internet then.

So far I had enjoyable battles against You - even though my troops are bound to loose in the end.

All 2nd entrance battles fought! The coming battle is a night battle. Commanders who don´t want to take the risk (since these battles are mostly very silly in CM) can try to get negotiated a cease fire for the night. Or they hope that the Neutrals try to negotiate that. Current troop mixes, "scientific dates", upgraded and updated strategical map and whatsoever as soon as possible.

The new strategical map is implemented now (see first post on the very top!). The coloured arrows show what attack possibilities the specific commander have. Isles what have grey names are neutral yet. If an intruder army is shown on one of them that means the isle is still not yet fully conquered. If the isle´s name has a colour it is in the hands of the army/party/side what have the same colour.

All setups for 3rd battle out!

First battle fought! Uffz.BRAUN captured the isle by surrender of the neutral troops.

After re-doing my PC two problems remain. CMx1 is to install yet and I´m not able to find my jpeg-screenshot with the settings for the global and specific settings of nVidia. I think comrade OWL posted that before years - means how to set the nVidia settings. Would be great if OWL (or in case I´m misled the comrade who posted it originally) could post it again. As soon as these problems are solved we can continue BIC.

A bit belated: Have a Good New Year, Comrades!