Billy Sing, “The Assassin of Gallipoli”

William Edward Sing was born in Clermont, Queensland, Australia, on March 2, 1886, to an English mother and Chinese father. He and his two sisters were brought up in Clermont and Proserpine, in rural Queensland. Life on the land was tough, and from a young age Billy had to help his parents with their market garden and milk deliveries. He was also a talented horse rider and skilled at shooting.

When war broke out in 1914, Billy rushed to sign up. As one of the first to enlist, Billy was not subjected to the degree of later resistance against recruiting non-white Australians into the AIF, and he was accepted into the 5th Light Horse Regiment. He was sent to Egypt in December 1914 and onto Gallipoli in May 1915. 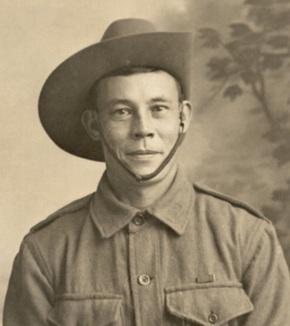 On Gallipoli, Billy was given the nickname “the Murderer” or “the Assassin” for his skill as a sniper. He is the crack sniper of the Anzacs.” Every morning in the darkness before dawn Billy would find a place to hide and watch over the Turkish soldiers in their trenches. Billy Sing was a cold-blooded killer. Sing acquired notoriety as an accurate sniper, shooting over 150 Turkish soldiers, for which he was awarded the Distinguished Conduct Medal. A higher informal estimate puts his tally at 201. Among his victims was his Turkish rival, nicknamed "Abdul the Terrible" by the Allies.
For his active duty in Europe, where he was involved in the Battle of Polygon Woods at Yrpes, the Australian War Memorial says he was awarded the Belgium Croix de Guerre in early 1918.

Over his period of service he contracted influenza, rheumatism, mumps, was shot on two occasions, sustained shrapnel wounds to both legs and his back and was gassed, resulting in him spending time in and out of hospitals and eventually causing his medical discharge.
Billy Sing died in a Brisbane boarding house, of natural causes (found dead in bed), 19 May 1943, aged 57 yearspoor and unknown to the wider public.​

Never heard of him. Thanks Louis. A tough Queenslander.