Having thinned out the whale herds I went looking for something else to play and found this in my wish list on Steam. Always liked turn-based RPGs and since I just finished binge watching the recent season of Vikings this immediately appealed to me.

Had to restart it a couple of times as I was learning stuff playing through the tutorial phase and needed to take that knowledge to get off to a better start. I think I've got most of the basics down so its on with the game. Like what I see so far. Graphics are good, scroll is fine, but I'd like to be able to zoom out a bit more. Petty complaint there. UI is pretty intuitive and not much reason to scum save because the auto save is good enough. Plus, it's actually rather hard to get a character killed even in defeat. They mostly come back but can suffer serious debuffs after injuries that take time and treatment to get them back to their old selves.

LOTS of skills to develop and things to build so the game is not merely a hack & slash. And it is one of those addictive games where "alright, just want to get that little quest done" and 2 hrs later...
This gives you a pretty good over view:

This looks good! @mTk you go through games like a scythe through wheat. I'm still playing Battle Brothers.

Well, BB was thrashing me so badly it had become more like a job than a game. Decided I needed to back off that just a little as it was burning me out a bit.

I'm a glutton. BB is kicking my ass also, but I can't put it down.

Not so bad that game! Remembers a bit on Diablo and similar games.

Yep, pretty much. Finding it very interesting. ATM the quests are fun and don't feel repetitive.
This should keep me busy for some time to come as I haven't even completed my boat to cross the Channel yet.

Well, I got my ship built and just stepped aboard the "Sea Dragon". The adventure begins as the sail unfurls and the 10 crew members stow their oars. Weather is good so rations will be cooked this evening and substantial amounts of mead spilled. We chase the sun as the Dragon heads west at best possible speed. 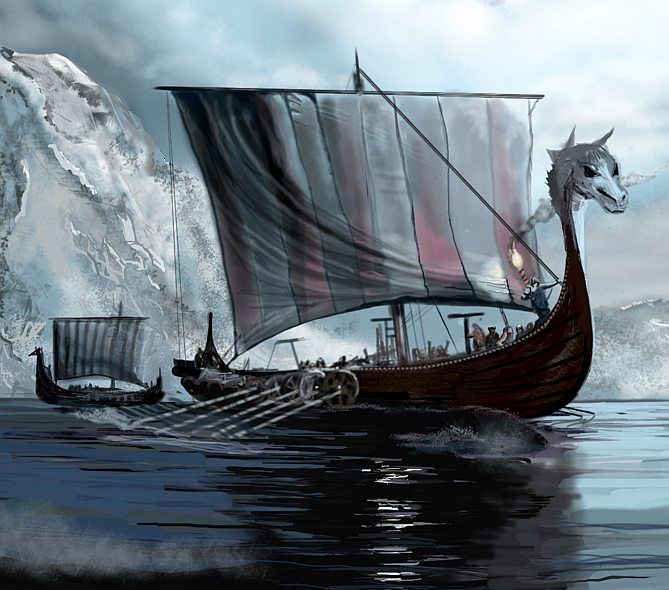 Saw this game on Steam awhile ago, looks good, I have it on my wish list.

I love it, but having problems keeping my vikings alive. I should have gone to You Tube before I started the game and loaded up on some basic tips. I'm too far into it now to restart, but have hopes that I can correct my downward spiral in time to salvage the situation. This is not a short game. Keep this in mind:

- You cannot (for the most part) buy armor or weapons, nor will you find much lying around. This makes no sense as all of the enemy is armed so where did their weapons/shields go!? It is what it is. Get 2 of your crew skilled up in "crafting" skills asap and start cranking out weapons/armor asap. Higher the quality the better. No reason to save resources. You'll find more.
- Spend skill points earned asap. The more you spend will open up more skill levels to you.
- Apply the skill <reduce infection speed> (that's not what its called but you'll recognize it) asap. Even the most minor infection will eventually kill your viking if left untreated. Some sooner than others.
- As far as I can tell your viking will not self heal over time and will probably die as well from any severe injury/infection. While they are injured their combat ability can be significantly reduced. Tend to their injuries asap. ASAP is unlikely to be fast enough.
- You need at least two Witches in your group of 10 and I'm thinking even 3 would be better. I usually roll a warrior to start, but in this game it might have been better to be a Witch. That would have been interesting as they do have some combat abilities when not healing every turn. They could be very effective archers themselves. They can make medicine from herbs to heal wounds/infections. You will find you will likely be short of both and become frustrated as your injured party deteriorates towards death. You'll need to work hard at this. Really hard. The reason why it's hard is that treating the injured (along with practically everything else) can only be done when "camping". Camping takes 12 hrs of game time. Healing takes multiple camping turns depending on the severity of the injured party. The good news is that combat rarely outright kills a member of your party. Sometimes I just wish it did. There are time limits to accomplish major objectives in the game so you just can't sit in a camp indefinitely.
- Give everyone the <heavy sleeper> skill before your first camp. This will allow them to only need 1 sleep shift o/o 4 and make them 50% more productive while camping! Very important as any injured party member can rarely perform any function when camping.
- Healers can heal others (not themselves) during combat. Get them trained as high as you can as fast as you can. Enemy archers will keep them very busy.
- Go after enemy archers asap above all other enemy units, except maybe healers. Armor seems to have little effect against a well aimed arrow. Use cover from archers whenever possible. No joke. Archers are not likely to pursue you so running around a building or trees will likely give you some breathing room.

This game is great fun, but even on <dimwit> difficulty you can see I am heavily challenged. Nothing newsworthy there. The above tips should be a big help to you though.
Last edited: Feb 17, 2018

Well, after the above doom & gloom report things have taken a remarkable turn for the better. And it all happened by my turning north instead of entering the large English town in the center. In the north there is a small settlement (that I need to convince to become allied with me) where I was able to find some herbs I could turn onto medicine and even found a few vendors where I could buy those as well as food. All of a sudden I am well prepared for illness/injury and don't have to work much at keeping my party fed for the near future.

Now it's time to go have some combat and see how the local enemies stack up. Could use some looted valuables (money). I need to earn some skill points (never ending) and get some resources for crafting armor/weapons (never ending). Still, things are much improved.

Things are much better! Decided to go North instead of a large English town in the centre and immediately was able to gain substantial quantities of herbs for medicine. Even found a couple of vendors where I could outright buy some extra medicine and food. So, set for those for the foreseeable future. What a relief.

Now off to do some local quests and see how enemy combatants stack up. Always looking for a chance to kill and plunder. I mean we are Vikings.

Damn it @mTk we want screenies.

Hmm. Let me look into that.
As for kill & plunder doing much better as well. Just completed a quest, had two fights and didn't even get scratched! Also, a gorgeous, red-headed, archer has agreed to join my group. Not sure how that will work out in the long run as I thought the party could not exceed 10 members. Maybe I'm wrong about that.
I did manage to craft two more weapons that are a big improvement over what they replaced. They did have an impact (pun intended) on combat results, but exhausted my materials supply. Need more plundering!

Well, that was clearly the right thing to do, moving to the north. Spending quite a bit of time on quests necessary for me to form alliances and an army for my return home, but that is quite a way off yet. Still learning how some of the combat skills work and still getting my butt kicked when I'm a bit casual in a fight. AI is quite good in that regard. AI archers are just merciless and I love hacking them to pieces!

Hope to have a level 4 craftsman soon, but will need more materials to make use of him I need better armor and shields, but that requires hides of which at the moment I have ZERO! [sigh] Items you find lying around or looting can be used to upgrade things you craft so pick up everything you see. Don't forget to use your <alt> key to highlight usable items in the area, particularly after a battle.
Last edited: Feb 26, 2018

In most RPGs there is crafting, but it is frequently just a side item with no real game significance. Not so here. This far into the game I just discovered "tinkering" wherein you can make extremely usefull items such as traps, consumables, etc. Easily made from things you find traveling and probably mandatory for my future battles success. I can make stuff for auto heal 3 turns, fire bombs that bad guys really don't like much and block enemy advances, traps to immobilize the enemy, water to put out my own burns... This stuff is is desperately needed in battles when I face tougher enemies above my own combat abilities. Had I known the usefulness earlier could have saved myself a lot of grief. At least you can now..

So are you expeditioned out?

Temporarily. Got side tracked by the new WoT upgrade and dabbling a bit in Oblivion. So many games...

For a little levity, go to Steam and check out "Bad North". Looks right up your Norse by Norsewest alley Terry.