Aloysius Herman Schmitt (Dec 4, 1909) was a Roman Catholic priest who served as a chaplain in the US Navy at the beginning of WWII. 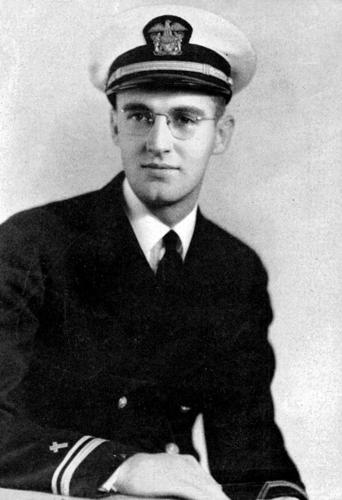 On Dec 7, 1941, Fr. Schmitt was serving on board the battleship USS Oklahoma during the Japanese attack on Pearl Harbor. That day began with Mass in the crew's recreation room aboard the ship. Shortly after, the first wave of Japanese aircraft attacked, hitting the Oklahoma’s side with multiple torpedoes. Quickly filling with water, she began listing badly to starboard. A number of sailors, including Fr. Schmitt, were trapped in a compartment with only a small porthole as the means of escape. Fr. Schmitt helped a number of men through this porthole. When it came his time to leave, he declined and helped more men escape. In total, he helped 12 men escape.

Schmitt could have escaped, but instead hoisted others to safety through a 14-inch porthole.

The men Schmitt saved swam through the attack to safety on the USS Maryland and saw their ship go down.