@Nelson1812 and I have agreed to the idea of opening this fun little campaign idea to more players.

Players issue a challenge to fight for a territory, set up a FOG II MIRROR battle using forces and opponents for the selected region, but can choose from ANY time period available -- from Ancient Egyptian chariots to Romans to Vikings and everything inbetween (so keep the DATE and GEOGRAPHICAL buttons on when selecting forces)
For example: in northern Spain you could use Spanish vs Romans, Romans vs Carthaginians, Romans vs Visigoths, Franks vs Arabs, Visigoths vs Arabs etc ...

Percentage scores are added up over both battles and the higher total % points wins. (usually % casualties inflicted)

The winner of the battle gets to add the province/region to their growing empire for rest of campaign.

If a player wins BOTH battles outright, then he gains initiative and gets to chose the next battle, otherwise we alternate.

Much later, once all provinces are taken, we can start attacking each other's provinces

Players are limited to ONE battle at a time, but there can be overlapping battles as games finish at different rates & speeds of play.

We can probably accommodate 6 - 8 players maximum ... then there will be 3 - 4 battles being fought at any one time.

Map gets updated as battles are completed -- at the end, player with biggest Empire (most provinces) wins.

Idea is for this to light and for us to have fun and play as wide a variety of battles as possible -- and keep the battles ticking over at a good rate.

We'll reset the one @Nelson1812 and I have started and clear the map and start fresh.

Can I be Red please!

May I be a regular opponent of all the would be named faction conquerors?

Badger73 said:
May I be a regular opponent of all the would be named faction conquerors?
Click to expand...

Okay, you're saying that the empire owners only play against each other. Got it.
How are opponents decided as players move into unclaimed provinces?

Badger73 said:
Okay, you're saying that the empire owners only play against each other. Got it.
How are opponents decided as players move into unclaimed provinces?
Click to expand...

I think I want to proceed in this way: at start I randomly draw a starting province for each empire.

Two players get drawn to issue the first challenges/attacks on provinces.

I'll do a random draw as to their opponents in the two opening mirror battles.

The WINNERS of the two mirror battles get to choose and set up their next challenges/battles. -- their opponents get assigned by random draw (flip of a coin)

In the above case, the other two players can then proceed with their next challenge/battle so long -- winner gets to pick province to fight over.

Disadvantage of above system is that we have to wait for all battles in a round to complete before we kick off the next set.

If we get two additional players to join in, we just expand the process ... they can jump in and catch up by winning lots of battles (it's just for fun after all)

An additonal battle option could be:
If one of your provinces has a common border with an enemy province (not including their start province), you can attack into that province.
BUT: if you LOSE the battle, the enemy captures the province you attacked from.

OR: If attacker loses, the enemy gets an immediate FREE counter-attack into the province the attacker attacked from.

I think it sounds good. Nice and simple.

We are ready to go -- we have 4 participants.

Assigned numbers to each province and used a random number generator to assign starting home province. 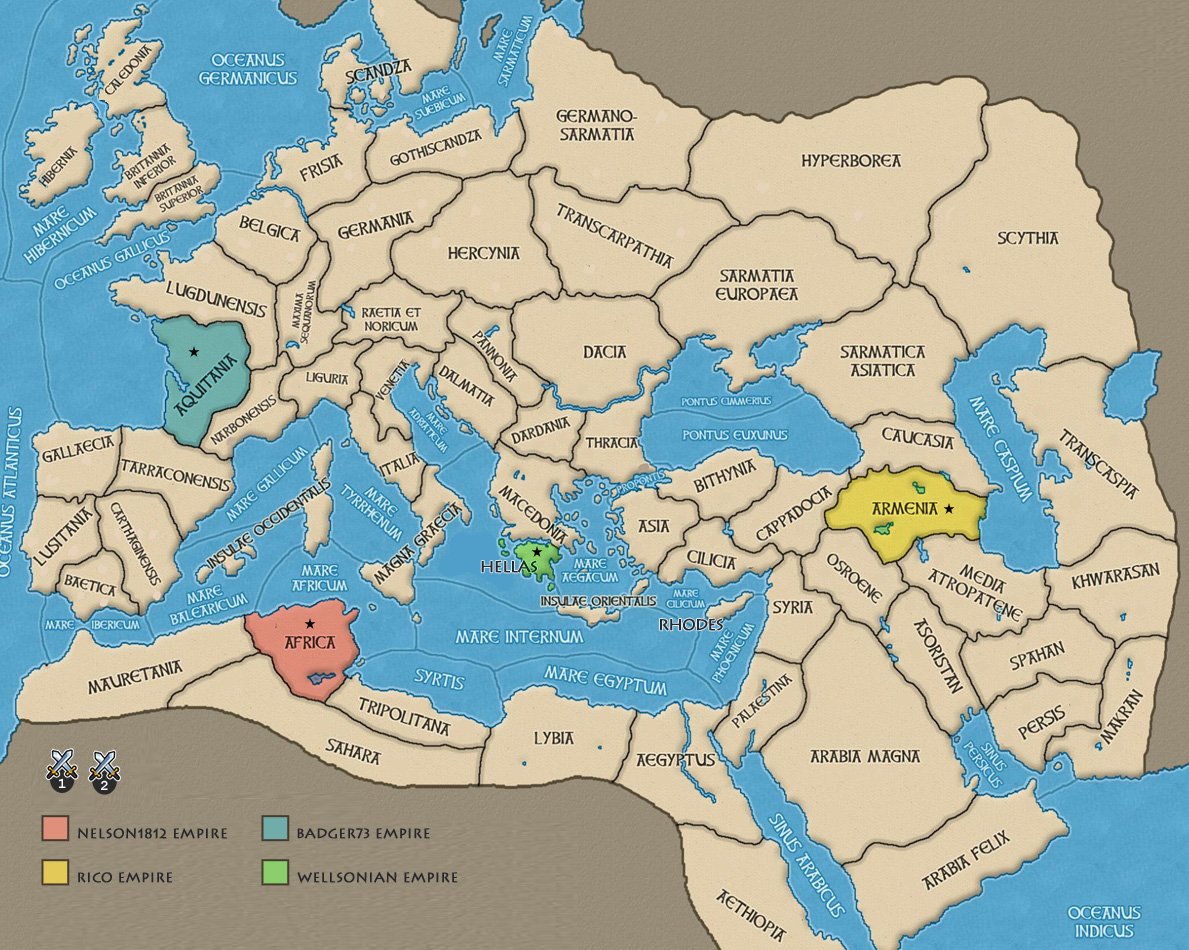 I've done the random draw to start off the first challenges/battles:

BATTLE 1: Wellsonian (selects province and sets up battle) vs Nelson1812

First battles challenges have been posted.

The battle for ARABIA MAGNA rages on ... I think my string of recent defeats will remain unbroken as @Badger73 's cavalry routes mine in both battles it seems ... sigh... should post some screenshots of the sorry tale at next exchange of turns...

How's the @Nelson1812 vs @Wellsonian in MACEDONIA going?

Rico said:
The battle for ARABIA MAGNA rages on ... I think my string of recent defeats will remain unbroken as @Badger73 's cavalry routes mine in both battles it seems ... sigh... should post some screenshots of the sorry tale at next exchange of turns...

How's the @Nelson1812 vs @Wellsonian in MACEDONIA going?
Click to expand...

We are engaged in a fierce couple of battles. Too early to tell!

Rico said:
The battle for ARABIA MAGNA rages on ... I think my string of recent defeats will remain unbroken as @Badger73 's cavalry routes mine in both battles it seems ... sigh... should post some screenshots of the sorry tale at next exchange of turns...
<snipped>
Click to expand...

I got lucky. Those cavalry melee's could swing either way. Interesting armies to play though. Thanks for selecting them.

Spartans for the Cup... in both games!?! 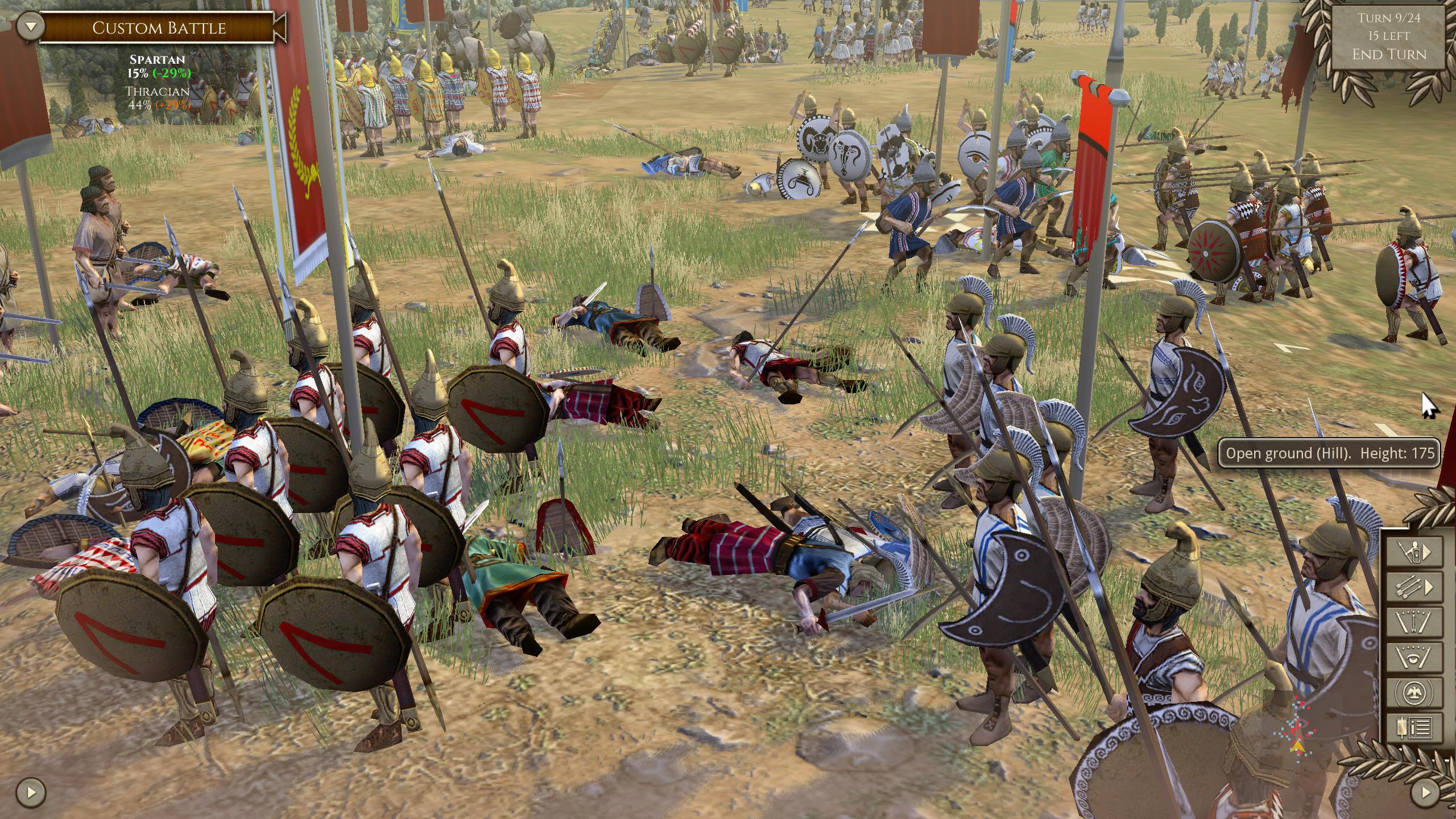 I pulled it out on the last turn and your unexpected left flank collapse. My cav unit just kept on breaking units. Pretty lucky........I thought we would tie at -27.

The Rico Empire armies lie defeated on the sands of ARABIA, fallen to the superior generalship of @Badger73 .... and the Wellsonian Empire armies conquer MACEDONIA.

Battle moves to the far north to SKANDZA as the @Wellsonian Empire makes a grab for the Viking homelands... @Rico