The Fokker Eindecker E.III is a single-engine single-seat fighter aircraft produced by the German manufacturer Fokker Aeroplanbau GmbH. The E.III is the main variant of the Eindecker series.

The E.III was basically an E.II fitted with larger, newly designed wings that had a slightly narrower chord of 1.80 meter (70-7/8 in), compared to 1.88 meter (74 in) on the earlier Eindeckers, going back to Fokker's original M.5 monoplane aircraft. The E.III retained the same 75 kW (100 hp) Oberursel U.I engine, and therefore also used the larger diameter "horseshoe" pattern cowling that also mandated the inclusion of the E.II's soffit-like extensions to the sides of the upper nose sheet metalwork, but had a larger 81 l (21.5 gal) drum-shaped main fuel tank just behind the cockpit, which increased the Eindecker's endurance to about 2Â½ hours; an hour more than the E.II. Most E.IIIs were armed with a single 7.92 mm (.312 in) Spandau LMG 08 machine gun with 500 rounds of ammunition; however, after the failure of the twin-gun Fokker E.IV as a viable successor, some E.IIIs were fitted with twin guns.

The E.III was the first type to arrive in sufficient numbers to form small specialist fighter units, Kampfeinsitzer Kommandos (KEK) in early 1916. Previously, Eindeckers had been allocated singly, just as the E.I and E.II had been, to the front-line Feldflieger Abteilungen that carried out reconnaissance duties.

On 10 August 1916, the first German Jagdstaffeln (single-seat fighter squadrons) were formed, initially equipped with various early fighter types, including a few E.IIIs, which were by then outmoded and being replaced by more modern fighters. Standardisation in the Jagdstaffeln (and any real success) had to wait for the availability in numbers of the Albatros D.I and Albatros D.II in early 1917. 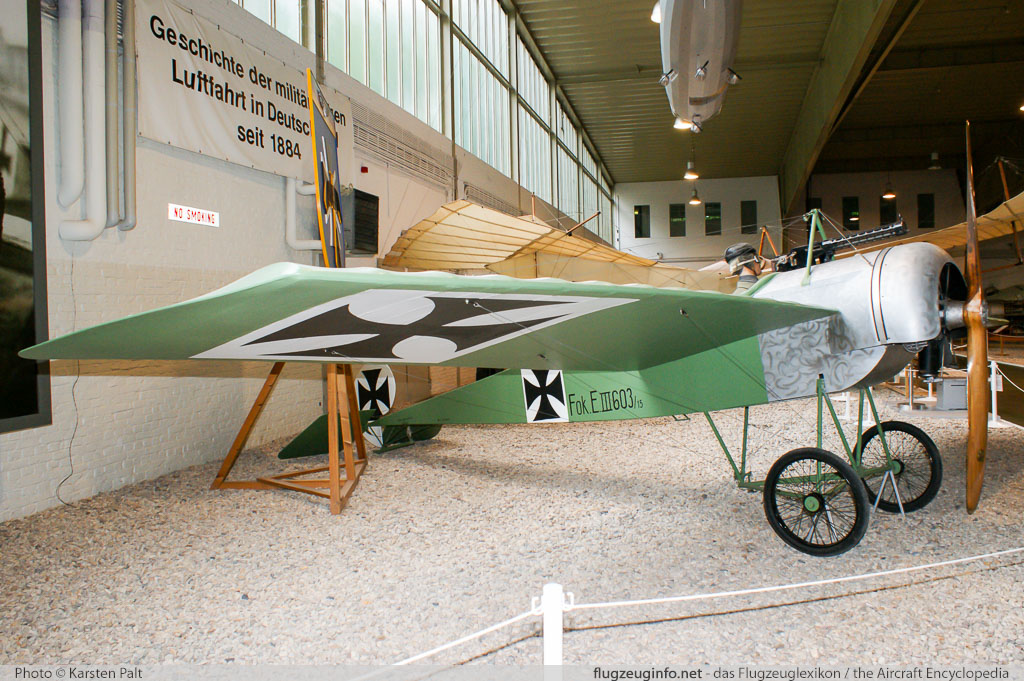 I'm flying it quite often in Rise of Flight, one public server is running Early War missions once a week. Often opposed to Airco DH2s and Nieuport 11s.
Like the DH2 it has no throttle, it's full gas all the time, you just have to adjust mixture following altitude. Only way to slow down is to use the blip switch which cuts the engine, but only for a couple of seconds otherwise it might not restart...
Was the first to have a machine gun synchronized with the prop and firing through it, which was a huge advantage over Entente fighters...