L. Majozi (born on 1916) served at the 2nd Battle of El Alamein, where he was a stretcher bearer. Majozi was the highest awarded South African to have served in WW2, having been awarded the Distinguished Conduct Medal. 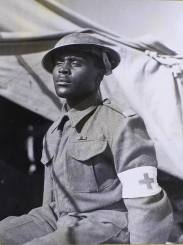 In 1942… “On the night of Oct 23 – 24, Majozi accompanied his company into action as a stretcher-bearer. In the later stages of the action when he was within 100 yards of the enemy and under heavy fire, he thought nothing of his personal safety and continued to evacuated casualties assisted by co-bearers. He was then wounded by shrapnel, but he continued evacuating the wounded. Told by a medical corporal to go back to the regimental aid post, he replied that there were many wounded men still in the minefield. He went back, and with the assistance for other stretchers bearers, he brought back more wounded. After his co- bearer had become a casualty, he did not waver, but carried wounded men back alone on his back to the aid post. When he was eventually told by the Company Commander to go back, he smilingly refused and remained on duty, working incessantly till he collapsed next morning through sheer exhaustion, stiffness, and loss of blood. His extreme devotion to duty and gallant conduct under continuous enemy fire throughout the night saved the lives of many wounded men who would otherwise have died through loss of blood or possible further wounds."

At a parade in Egypt after the battle, the commander of the 1st South African Division, Major-Gen. Daniel Pienaar said of Lucas Majozi: He is ‘n man of whom South Africa can well be proud. He is a credit to his country. 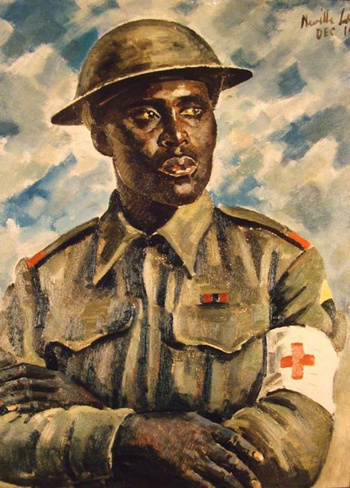