The idea to build a small and powerful motorboat which could attack and destroy with explosives enemy vessels at sea came in 1935 from Amedeo, the Italian Duke of Aosta. The Dukes's brother Admiral Aimone and fellow Navy officers developed the concept further which resulted in the production of 6 Barchinos in 1938.- 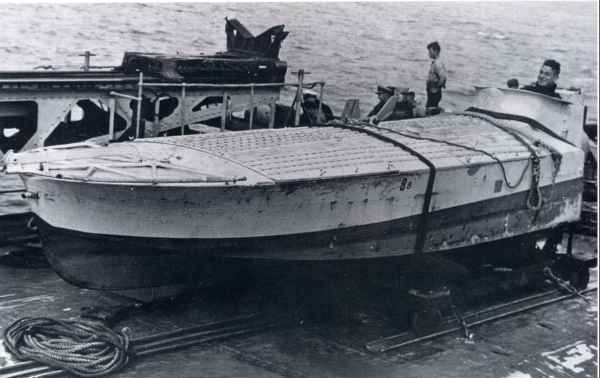 The operator was seated in the back and at the distance between 100 and 50 m from the target left the craft by falling backwards. He disposed of a folded floating cushion on which the operator climbed to avoid the consequences of the close explosion.- 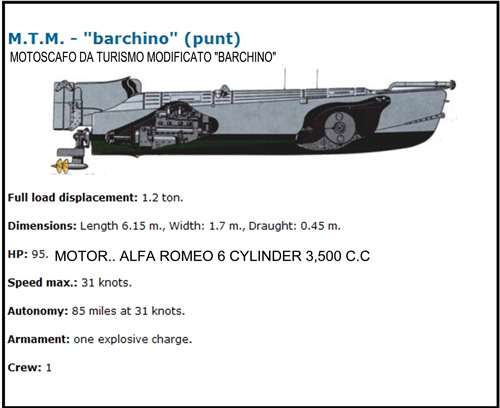 In the early morning of March the 26th 1941 3 Barchinos attacked succesfully the cruiser HMS York and the tanker Pericles in the shallow waters of Suda Bay (island of Crete). Later during the war the Italian Decima Flottiglia MAS (Motoscafo Armato Silurante) moved north operating along the coastline of the Provence and Liguria. The most significant action resulted in the heavy damaging of the French destroyer Trombe in mid-April 1945.-

The production during the war was in hands of the CABI Cattaneo shipyard in Milano - Italy wich produced Barchinos in small series of 6 or max 12 examples at a time. Some Barchinos were also delivered to German units.-

Most of these Barchinos were destroyed and only 5 or 6 have survived to these days. Three are exhibited in the Italian war museums of La Spezia, Milano and Venezia.-