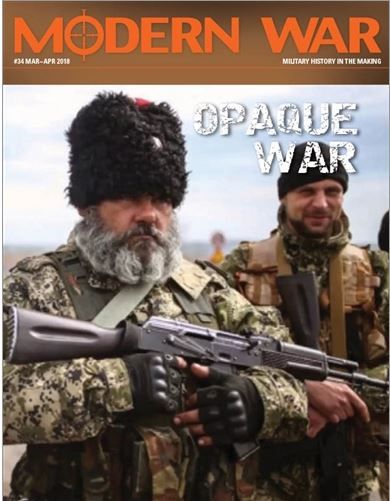 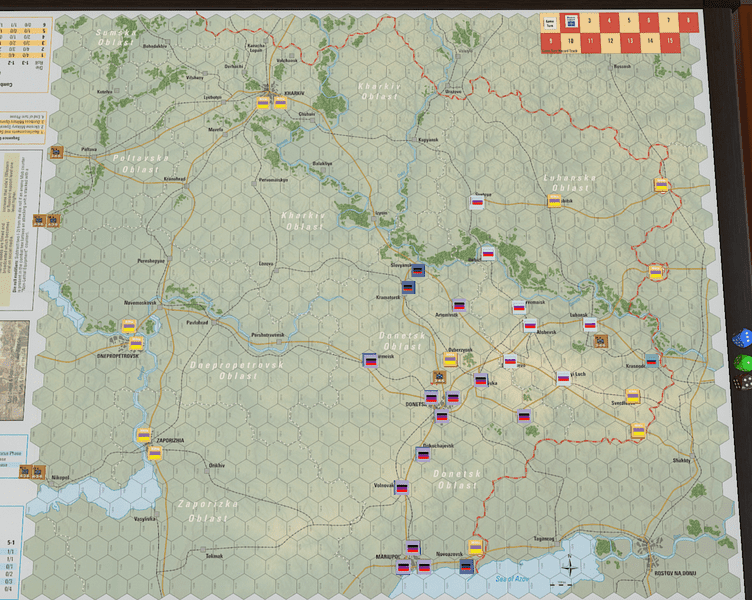 I've just had my first game with... my UKRAINIAN opponent (just to be clear, actual real life nationality Ukrainian). This makes the subject matter much more real.

For starters, he can pronounce every city and town on the map.Thats a bonus. And oddities occur , such as when he said, "why Oblast? That seems like a strange word." I replied, "what do you mean, isn't that the correct word?". He said that because he was thinking in English, "Oblast" caused some cognitive dissonance (surprisingly, Russian language for "cognitive dissonance is... "cognitive dissonance" 99% the same words). He wanted the equivalent in English... I suggested "Province", and he was much happier with that when he was in "English language mode".

Now here's the thing. When playing a WWII game, say replaying, Operation Barbarossa, you're replaying something that happened generations ago - its history. You'd think WWII happened recently judging by the comments in a typical youtube video; Russians will say, "we won it."; Americans will jump in with, "Commie scum, WE won it with D-Day & Lend-Lease; Brits will go on about Enigma beating Hitler; all Aussies know that the Rats of Tobruk took out the Third Reich, Poles will troll, reminding everyone about massacres... you know what I mean - unless you've only watched video's with disabled comments.

But WWII is history. Sure it shaped the 20th Century. But its history. And anyone still living who was in it, really in it, frontline, isn't talking about it - and they never did. Its a distant memory. It's safe (Mind you, if I'm reading a set of rules with a Swastika on the cover - I will hide it - not entirely work-safe from the ignorant).

I can only guess how disturbing playing this game is for my Ukrainian opponent. Actually, I'm not guessing. He said, "this is disturbing." He has visited, worked, has relatives, friends, spent time, in every city and town on the map. His personal friendships have been torn asuna (sorry, "asunder" - too much SAO) by the Ukraine vs Russia dynamic that happened in 2014 and continues to this day.

It is an emotional rollercoaster. My Ukrainian friend does not see the rebels in Donetsk as evil. Nor does he see the Ukrainians as evil NAZI's, even though he is aware that Ukraine is ridiculously portrayed as NAZI in Russian propaganda; while he is quite aware that a tiny percentage of Ukrainian ARE actual NAZI's... the gamut of emotions is many and varied. So convoluted and disturbing.

Every turn of the game created a gateway into a real life anecdote about someone he knows in this town or that town. Its like those war movies where one brother fights for the north, and the other for the south.

This isn't a review. But I will say, as a game, it is looking good so far. I will be honest and say that I thought the subject matter was interesting, but probably the gameplay wouldn't cut it. But to my surprise, it DOES seem to work as a game. And I think this is the only game where you might shoot Flight MH-17. If MH-17 (remember that?) does get shot down, it is very significant for Ukraine; makes sense, because lets face it, that's one of the reasons why anyone in the west is even vaguely aware that something is happening over there.

I do have a Russian gaming friend. I did entertain the thought of pairing him up with Ukrainian friend and watch them play Ukraine 2014. But after seeing the trauma, that is a non starter. Friendships would be lost. Possibly blood spilled. Saying, "Its just a game" wouldn't diffuse it.

Opaque War. Aptly named. And the most traumatic experience I have had since playing, "THIS WAR OF MINE".