The Napoleonic Battle of two hills…

Well, decided to play the first battle scenario from one-hour wargames, Pitched battle (1)… Although it took nearly a week to play.

Interruptions, such as with me not liking the cork board tiles colour, and so repainting. The rules and dropping the boxes of troops and several invasions mid game by my family and grandchildren wanting my lunch table!

Used the One-hour rules to set-up the test battle… numbers and their type as this supported my solo playing.

The French forces consisted of 4 Line Infantry, 1 Heavy Infantry and a battery of artillery.

The British received 4 Line Infantry, 1 Light cavalry, and a battery of guns.

The objective of the scenario, to eliminate the greatest number of enemy units.

At this point, I used the rules from 2x2 Napoleonic’s by Rod Humble.

A die is thrown to see the units allowed on the table.

The French cast’s a 4, Four units enter the arena.

Nelson's Brits throw a 3, Artillery, line infantry and a General.

At this point, the units are place in order of entry to the battle.

I leave the light cavalry in the rear. 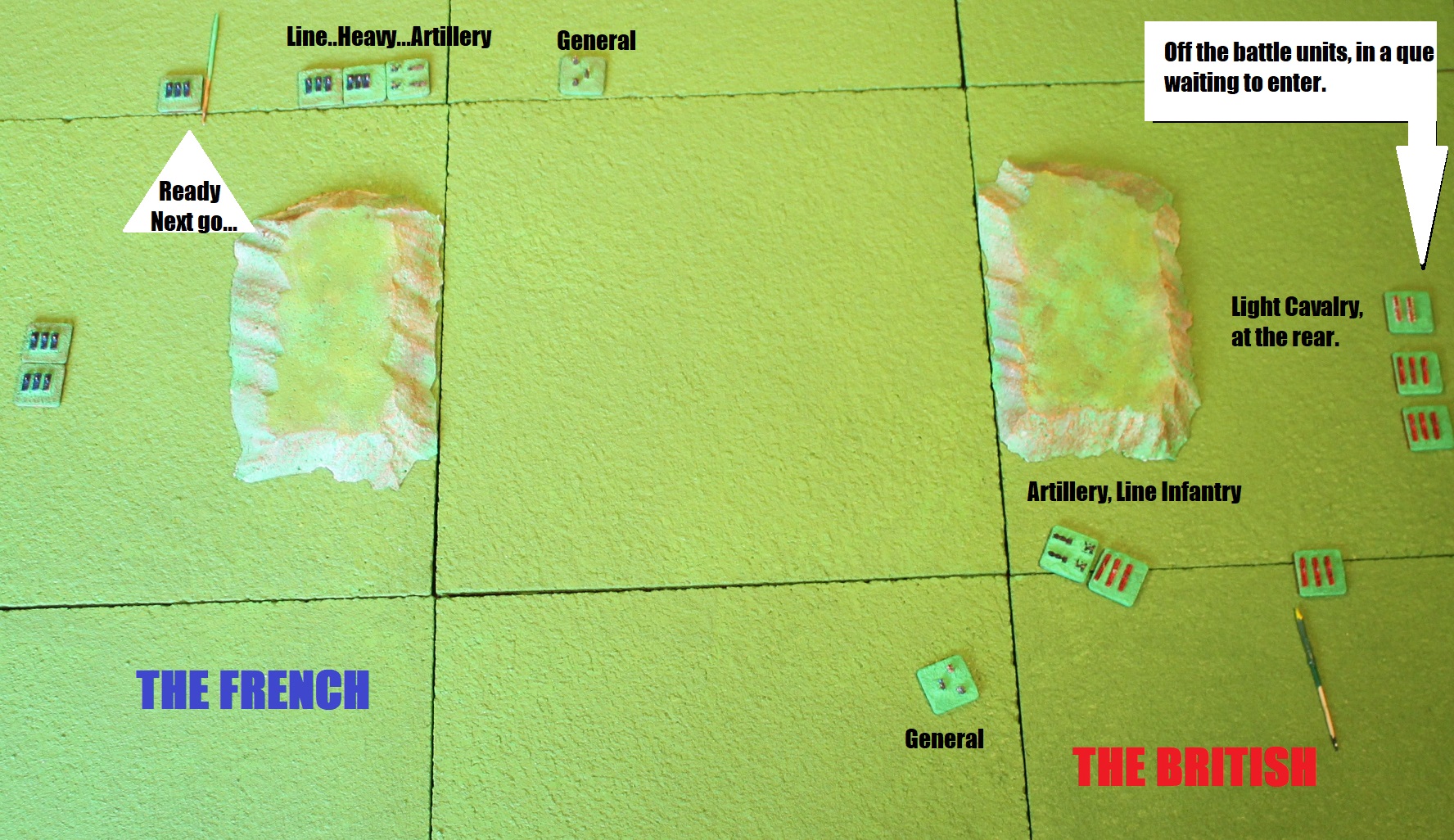 The off-board units must throw a 5, or a 6 to enter the battle ground.

At the end of move 4 the French have seen all their reinforcements arrive on to the battlefield. Meanwhile Nelson’s has only received a Line Infantry, the rest appear not to have marched towards the gunfire!

The Brit’s Artillery has fired and hit and disrupted French Artillery!

The British artillery is “pinned” and will require a general to rally them before being able to move, although they can continue to fire. 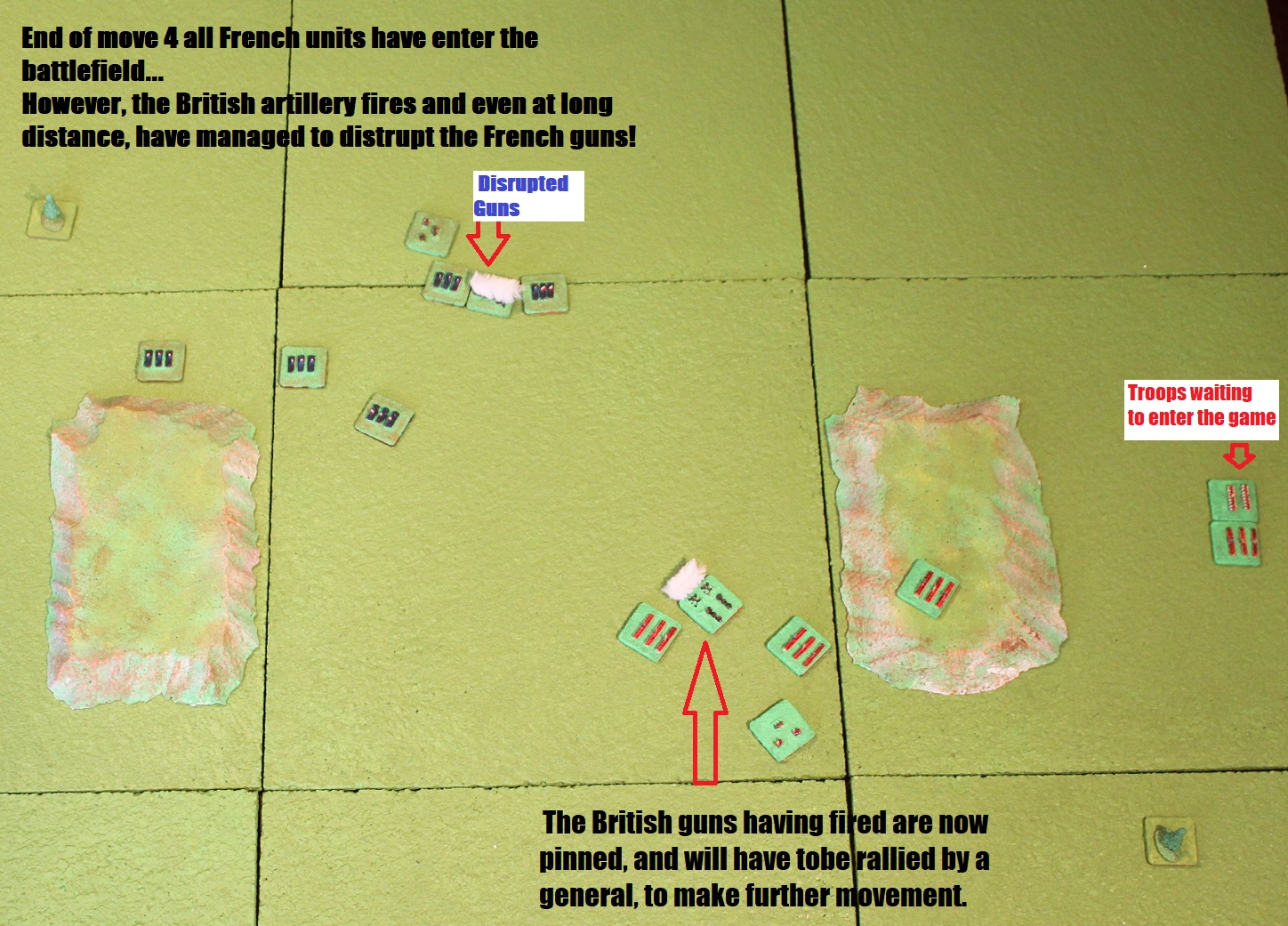 The French units push forward, as their general attaches behind the Disputed artillery, giving them a +1 to their rallying throw.

It works, but they cannot fire as ahead their own troops block any targets of the British in range.

Meanwhile the British, fail to have any hits, and their men have not succeeded in reaching the battlefield.

The French together with their artillery continue to advance. The artillery fires, disrupting the Line infantry ahead.

The British reinforcement manage to reach the battlefield. Ahead they form a line, the disrupted Line infantry unable rally cannot move or fire, the pinned artillery fires… but misses. 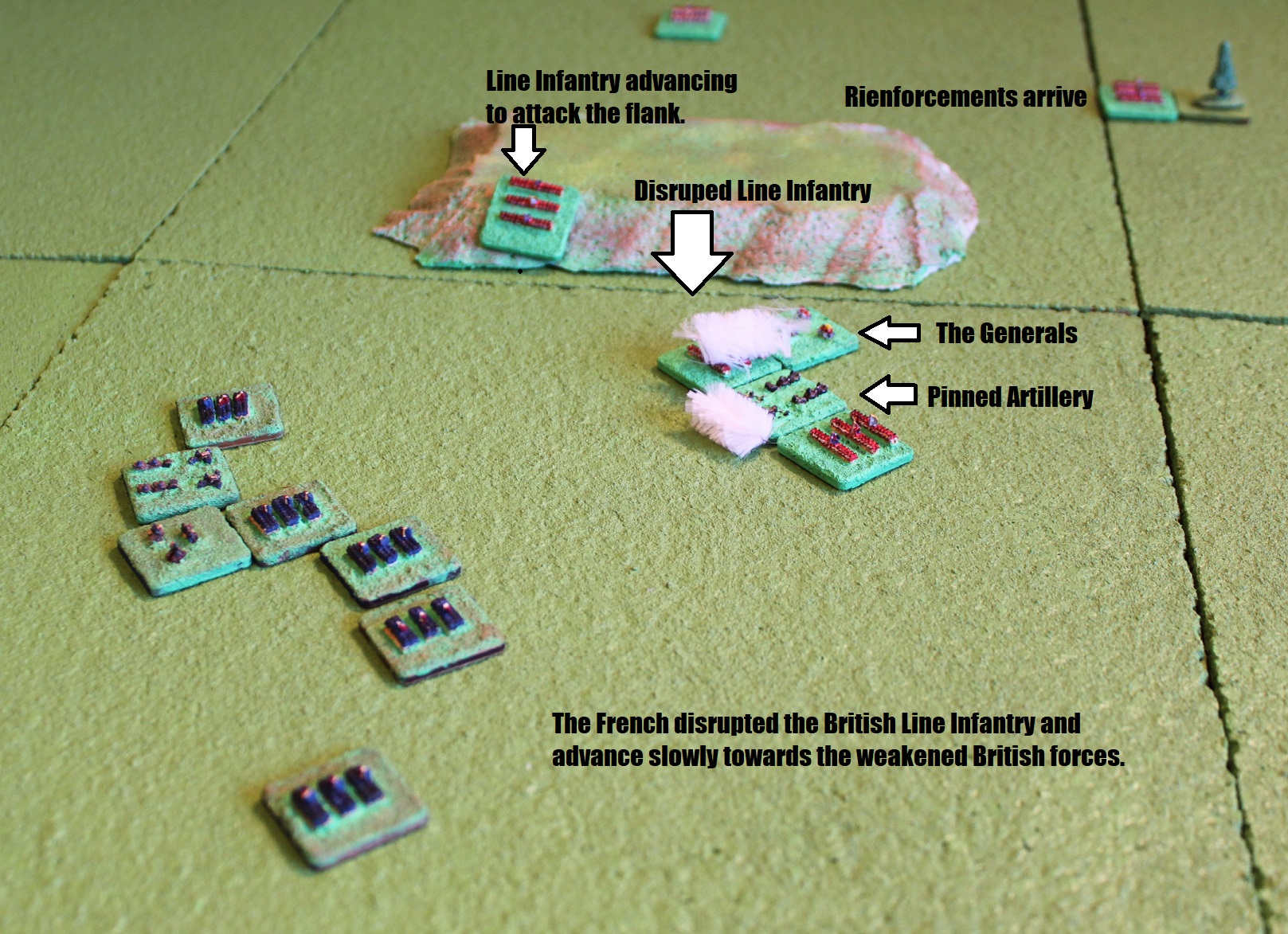 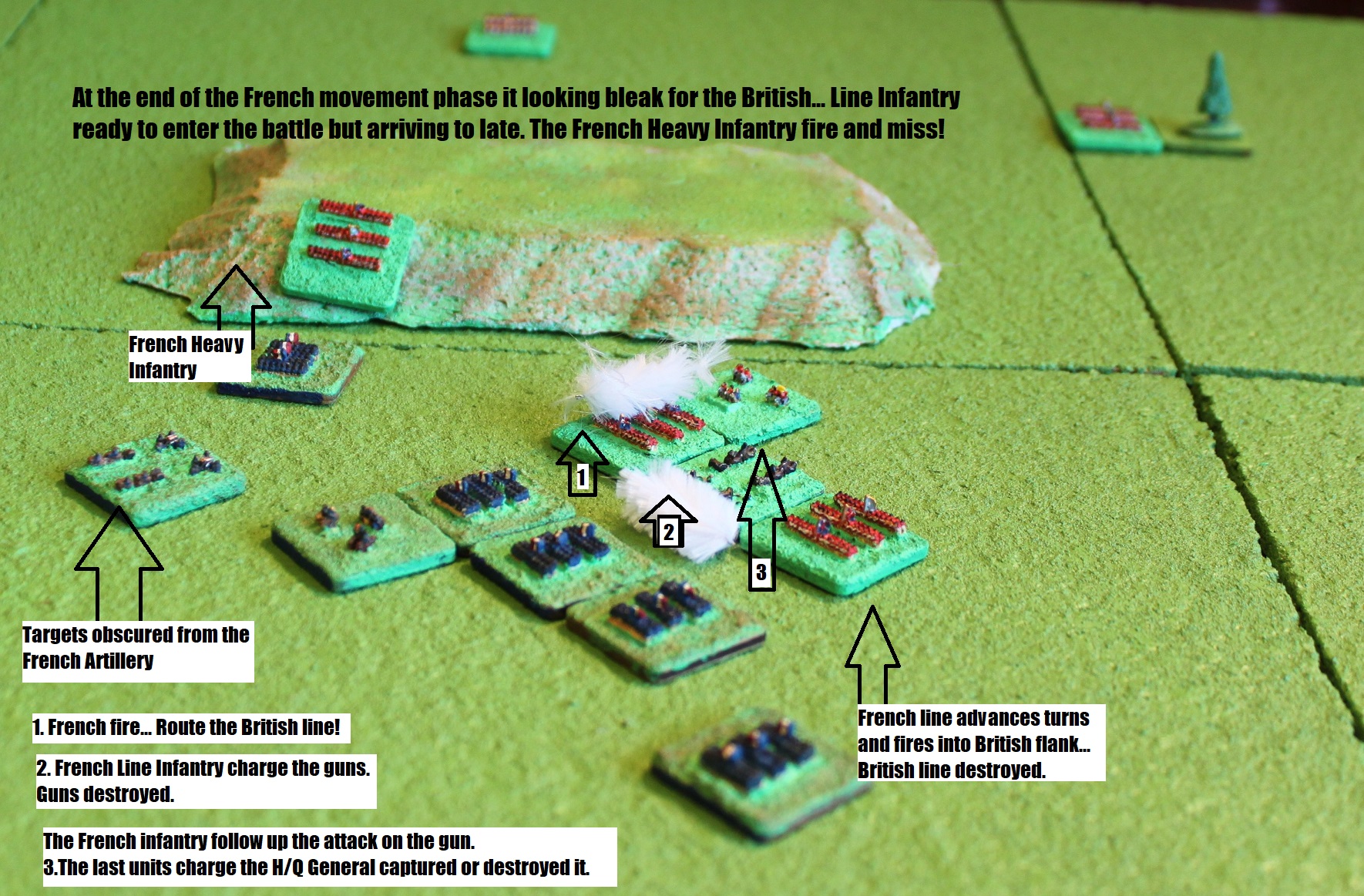 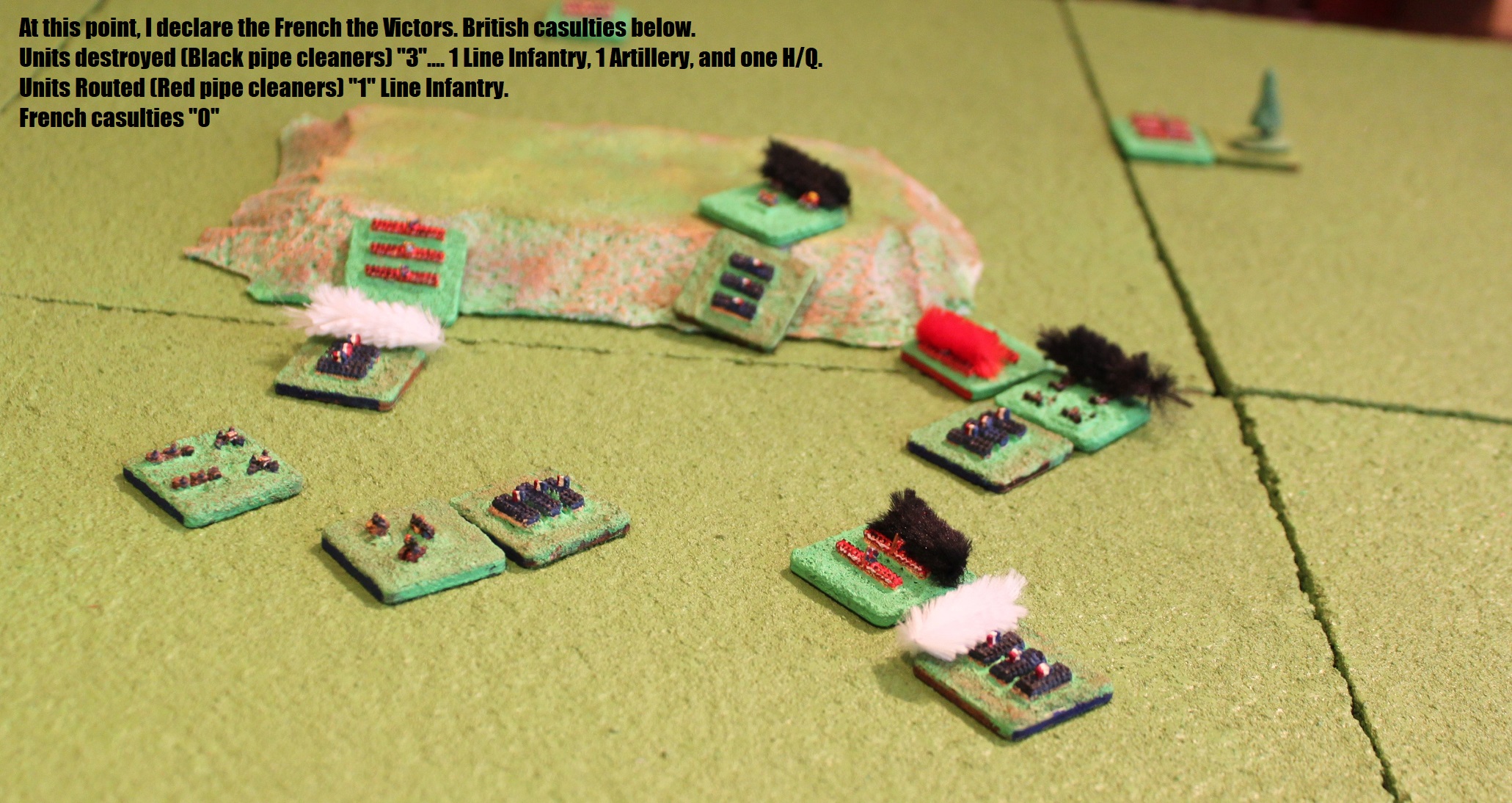 It's great that you have someone to play with.