Was The Result A Draw? No

Comments I attacked 556 on a fairly open CMFB map. I was armor heavy and 556 brought very little AT defense (just 2 75mm infantry guns and 3 schreks).

This allowed me to inflict heavy losses on 556. However, 556 had many, many heavy and medium mortar batteries and he gave my infantry a good shelling. Most of my losses came from 120mm mortars and 81mm mortars.

556 built some solid defensive works out of trenches. These mutually supporting works were hard to take because my tanks kept hitting the ground in front of the trenches or trench lips. They rarely put HE rounds into the trenches themselves. My 60mm mortars did a little better, but I generally had to suppress and storm the trenches to take them. One funny moment came when 2 of 556's trench men surrendered to me. I put my men on top of them and 556's men did a "surrender ruse" and picked their rifles back up and shot my men. Both men were dealt with harshly by my follow on waves.

There were 4 VLs on the map. After I took 2 of them, 556 launched a platoon sized infantry counter attack. He had to cross a small river to get to me. I let three quarters of his men get across the river and then deployed a tank to cover the crossing site. Now the attackers were trapped on my side of the river. A team of my infantry and tanks first halted and then surrounded and destroyed the counter attackers.

556 asked for a cease fire. Since I did not control or dispute 2 of the 4 VLs (including the sole major VL), I turned the cease fire down and asked for his surrender. After a few more turns, 556 surrendered 45 minutes into a 2 hour game.

263 Nemesis Americans survived the battle. 75 Nemesis soldiers were killed and another 59 were wounded. 1 Nemesis tank was KO'd by a 75mm infantry gun.

99 Germans survived to surrender to the Nemesis Army. 137 of their comrades were killed. Another 68 were wounded. 1 truck, 1 infantry gun and 2 MG pillboxes were knocked out.

CMFB also continues to reveal bugs. I had tanks repeatedly turn their turrets backwards (!) and my men generally could not see well. Specifically, lots of men and tanks looking at an MG pillbox in open terrain could not see it. 2 75mm infantry guns also fired at me repeatedly and did not even leave sound contacts. The latest patch is a bug fest.

Sounds like an interesting and unusual game. Interesting how you're saying he actually made good use of trenches. They seem a big waste of points to me, and I've never seen them effectively used in competitive play.

Bulletpoint said:
Sounds like an interesting and unusual game. Interesting how you're saying he actually made good use of trenches. They seem a big waste of points to me, and I've never seen them effectively used in competitive play.
Click to expand... 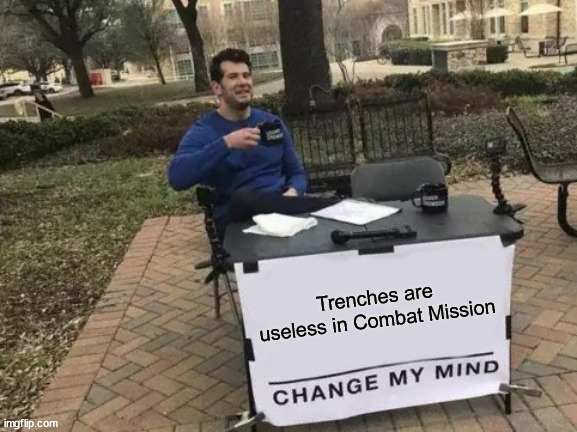 I tend to agree. They are expensive considering you have to buy two to get them to point in the right direction.