On the morning of March 21st, 1918 a explosion was heard across Paris. There was neither the report of a gun nor the sight of enemy aircraft. Over the course of the day another 20 shells exploded around Paris, with no clues left as to what had fired or dropped the explosive weapons. At first, it was thought that the explosions were from bombs dropped from an advanced high altitude zeppelin. However, Allied air reconnaissance plains quickly discovered what was assaulting the city of Paris.

81 miles east of Paris, a monstrous rail gun was sighted firing west. Nicknamed the “Paris Gun”, the rail gun was a creation of the Krupp factory, famous for making big artillery pieces for the German Empire since the 1860’s.

The Paris gun originally started its existence as a worn out 15 inch naval gun mounted on a battleship, which was refurbished with inserts that reduced the caliber to 8 inches (later rebored to 10 inches). Germany had much bigger guns in it’s arsenal, however the purpose of the Paris gun was not to have overwhelming power, but extraordinary range. To enhance the guns range, the barrel was lengthened from 16 meters to over 34 meters. In fact the barrel was so long that the Paris gun had to be rigged with a crane for support, lest the barrel kink under its own weight. 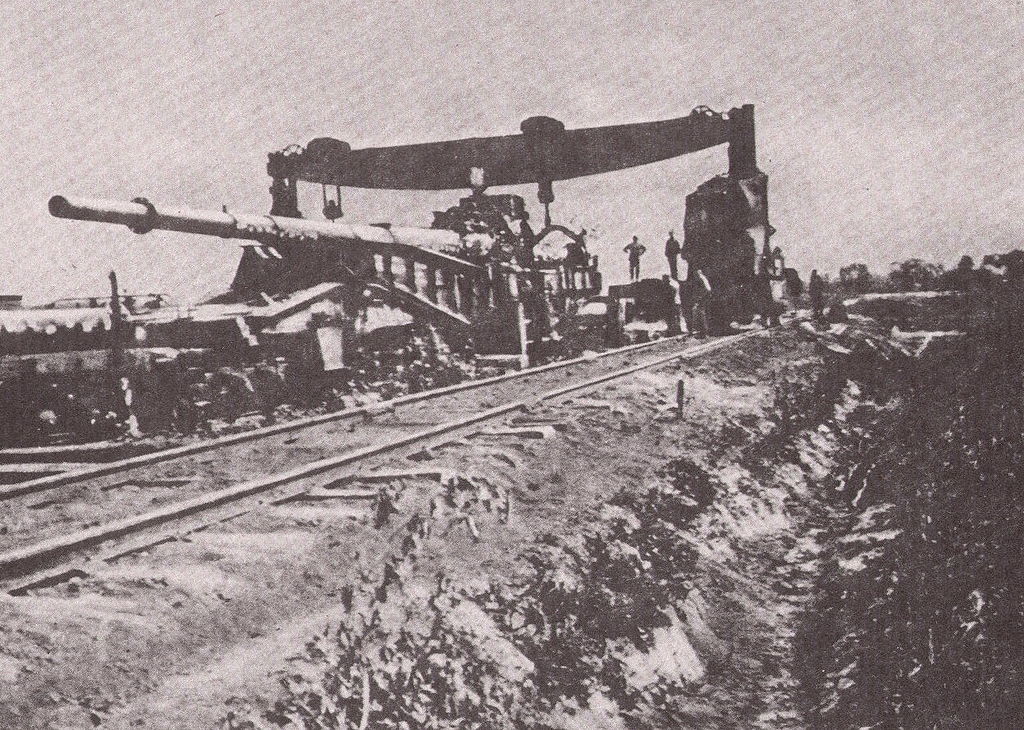 Mountings and carriages
It can be seen that there were two types of gun carriage employed. For the tests in Germany, a box-like coastal-emplacement carriage was used, with a turntable at the front, allowing limited traverse on wheels along a circular arc of rail at the rear. Operational guns used the railway type mounting as seen on the Long Max, which were lowered onto, and then bolted to, a circular turntable on a concrete emplacement [figure: artist impression of operational mounting]. This allowed full traverse. However, one intriguing photograph shows what appears to be an operational gun in a forest on a naval type mounting. 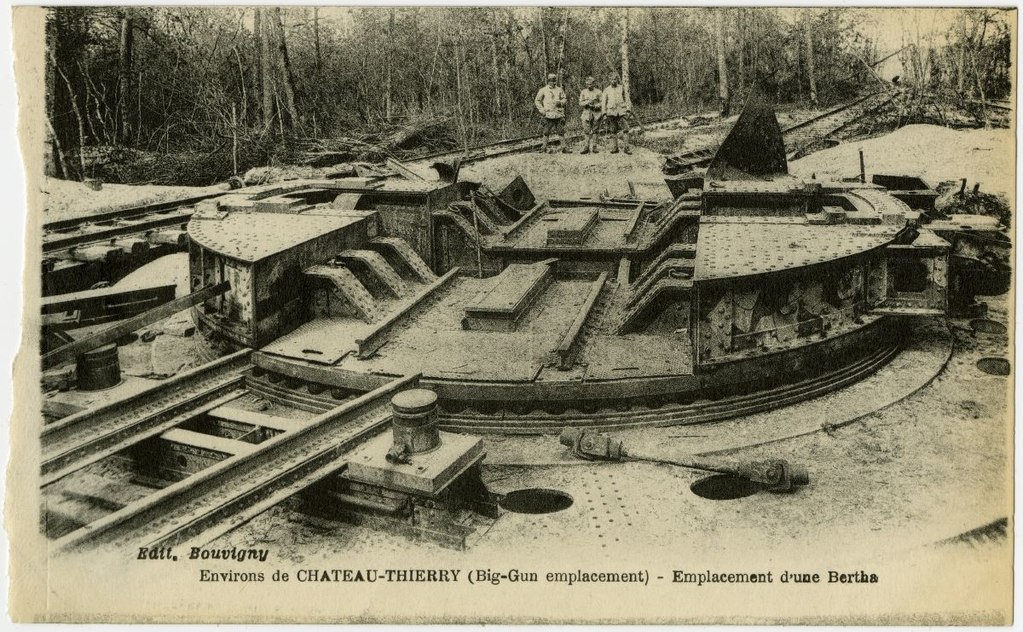 A Paris gun turntable mounting, as captured by United States forces near Château-Thierry, 1918.

The carriages were, as far as can be ascertained, hardly modified. All operations, such as traversing the carriage and depressing and elevating the barrel were done by hand, dozens of men operating windlasses and like mechanisms. The barrels themselves had to have large counterweights of iron ballast bolted above the breech to balance the whole assembly about the trunnions. Despite the much larger propellant charges used, the light weight of the shell meant that recoil was actually less than on 38cm guns, and the sound and shockwave on the ground considerably reduced, owing to the muzzle being so much farther away.

The performance of the Paris gun was impressive, bombarding Paris 81 miles away with 234 lb explosive shells. Its range was so great that gunners had to compensate for the Earth’s rotation (Coriolis effect) in order to fire it accurately. The maximum height of a shell’s ballistic arc reached 25 miles, thus the Paris gun holds the record for launching the first man made object into the stratosphere. Because of its lengthy barrel, the Paris gun achieved a muzzle velocity of 1,640 meters per second, or 5,400 feet per second.

Muzzle velocity was so great that the fired shells would wear away the inside of the barrel. Gunners noticed that the Paris gun slowly increased in caliber as they were firing it. The Germans were even able to calculate the rate at which the barrel was being worn, and to compensate, Krupp issued the gun with progressively larger caliber shells to be fired in a specific order. Krupp also supplied 7 replacement barrels as well. Altogether than gun and railway carriage weight around 256 tons.

Since it was originally a naval gun, the Paris gun was manned 80 German Imperial Navy sailors who were experienced in operating similar naval guns. Between March 21st and August of 1918, the Paris gun fired 367 shells at a rate of roughly 20 a day. As a result of the shelling 250 Parisians were killed and another 620 wounded. The worst of the shelling occurred on March 31st when a shell hit the St-Gervais-et-St-Protais Church, collapsing the roof and killing 91. While the Paris gun had a long range, it was not very accurate, firing shells at random places all over Paris. Thus, the Paris gun was employed as a terror weapon. In terms of its effectiveness, the Paris gun was found wanting. Excessive amounts of resources and time were needed for the gun’s maintenance. In addition, the Paris gun’s 234 lb shell was that powerful, there were many guns in German and Allied arsenal’s which were much more destructive. Of the 234 lb shell, only 15 lbs of explosives could be fitted into the shell. Thus the explosive power of the shell was minuscule compared to its weight. While the Paris gun was a wonder to behold, or a terror weapon to be scorned, it did little to turn the tide of the war. In August the Paris gun was withdrawn as Allied forces advanced towards Germany.
Last edited: Oct 3, 2017