Rico said:
Maybe symbolising France and Britain facing down Germany 1939-40 (before fall of France?) -- not sure of date of this.
Click to expand...

The housing architecture looks like The Netherlands, and as the German monster is clearly invading (not defending) this indeed is most likely about France and UK being the sole defenders of "freedom" I think.

Members of German special forces Brandenburgers prepare to drop on Rotterdam disguised as British soldiers in a C-47, 1940.
"... whether operating as a 2-man team or unit of 300, every Brandenburger was required to be fluent in the language of their destinations. They had to know the customs and history of regions so they could blend in and move without being noticed. Even the mannerism of how to properly spit like the locals, for example, was ingrained during training..." 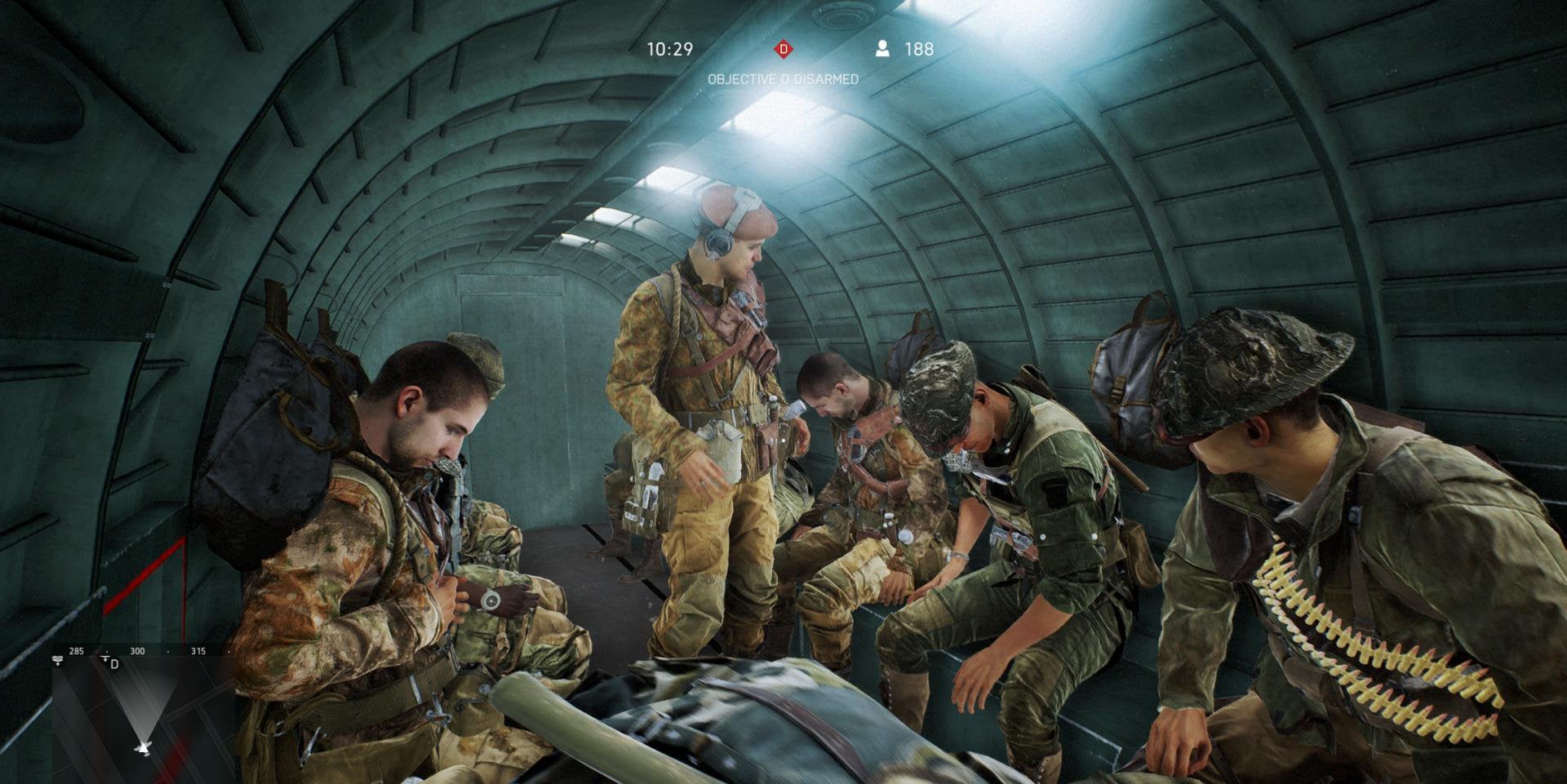 They went into combat during the campaign against the West in 1940. On May 8, two days before the offensive began, small groups of Brandenburgers slipped across the borders of Holland, Belgium and Luxembourg. They hit objectives minutes after the campaign began, wearing enemy uniforms as they exchanged fire with similarly attired troops, and sewing confusion throughout the countryside.

No Brandenburger could pronounce Scheve Scheveningse Schoenen. To pass as a local you really need to be educated in the country. To disguise as British makes no sense in regard to Dutch neutrality. They would have been interned. By pronouncing the above Dutch phrase with a fake English accent would be even more difficult. I was brought up Bilingual for 15 years in the Netherlands and 55 years in Australia. In 1991 during a visit, I didn't pass as a local in Amsterdam. I always take it with a pinch of salt stories like that.
Last edited: Mar 24, 2021

I visited the childhood home of my Grandmothers' before she died. She used to live on the southern river bank of Rotterdam during the outbreak of the war.

She narrated to me how one morning she, her father, and most of their neighbours were outside watching the german boats land before their eyes, the troops calmly getting out, greeting them and her father just said to her blandly: "Well it's war now. Come, let's go home". And they went home. 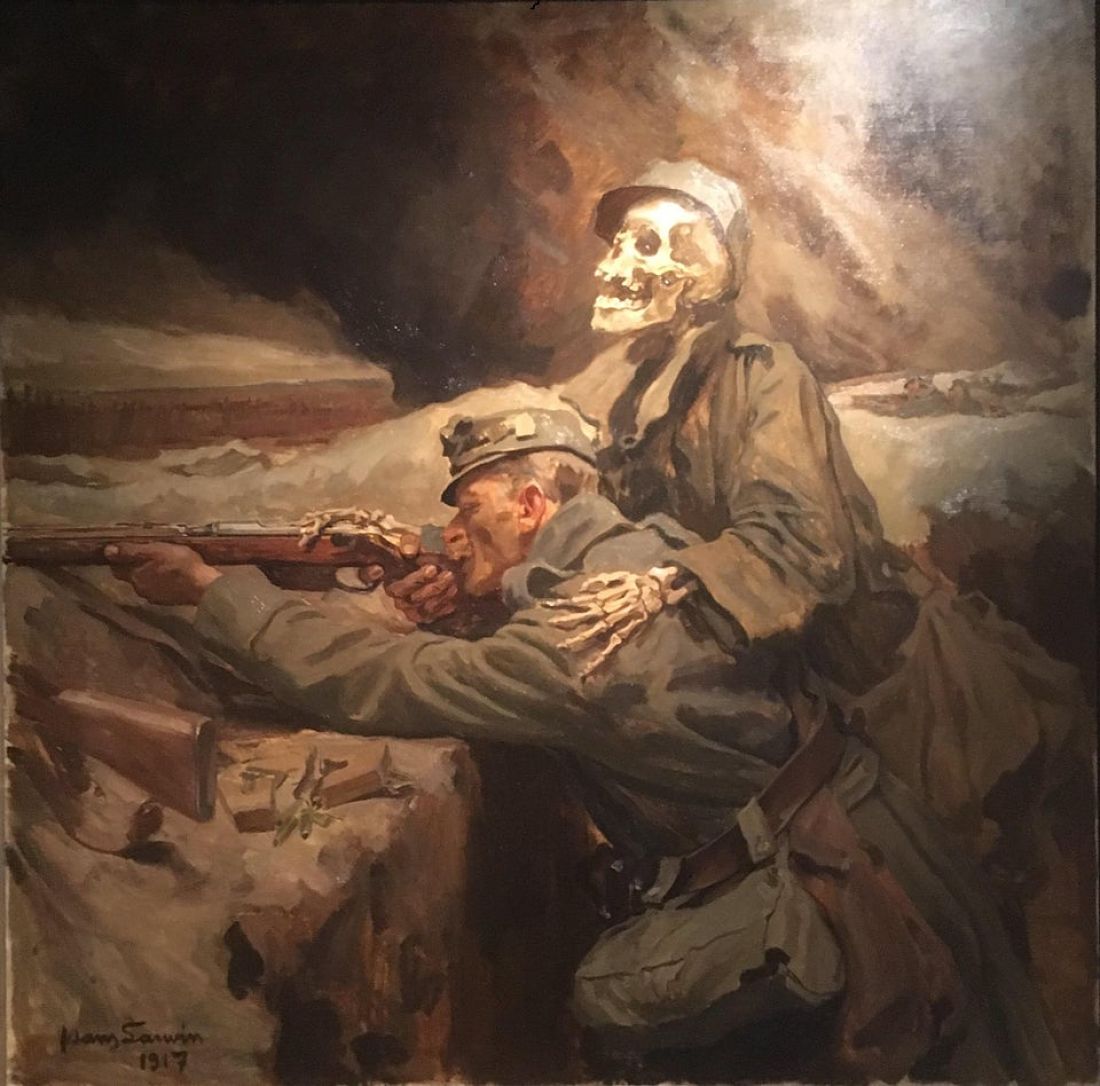 The War (German: "Der Krieg"), sometimes known as the Dresden War Triptych, is a large oil painting by Otto Dix on four wooden panels, a triptych with predella. The format of the work and its composition are based on religious triptychs of the Renaissance, like those by Matthias Grünewald. It was begun in 1929 and completed in 1932, and has been held by the Galerie Neue Meister in Dresden since 1968. It is one of several anti-war works done by Dix in the 1920s, inspired by his experience of trench warfare in the First World War.

From left to right, the left wing depicts a column of German soldiers marching away from the viewer through the fog of war towards the battle in the central scene. The central panel shows a devastated urban landscape scattered with war paraphernalia and body parts, reworking the themes in his 1923 work The Trench, and divided like the 16th century Isenheim Altarpiece of Mathias Grünewald with a living side to the lower left and a dead side to the upper right. A skeletal figure floats above the scene, pointing to the right, with a soldier in gas mask below, and scabrous legs upended to the right, recalling the legs of Christ in Grünewald's crucifixion scene. The right wing shows several figures withdrawing from the fight. A dominant greyish figure, helping a wounded comrade, is a self-portrait of Dix himself, in a composition similar to a descent from the cross or a pietà. In the predella, several soldiers are lying next to each other, possibly sleeping under an awning, or perhaps they represent the dead in a tomb. This fourth panel is based on The Body of the Dead Christ in the Tomb by Hans Holbein the Younger.

The painting uses a restricted palette of mainly dark colours, with cold greens, greys, and whites for death and decay, and warm reds and oranges for blood, destruction and shellfire.

Thanks Louis and Rico. 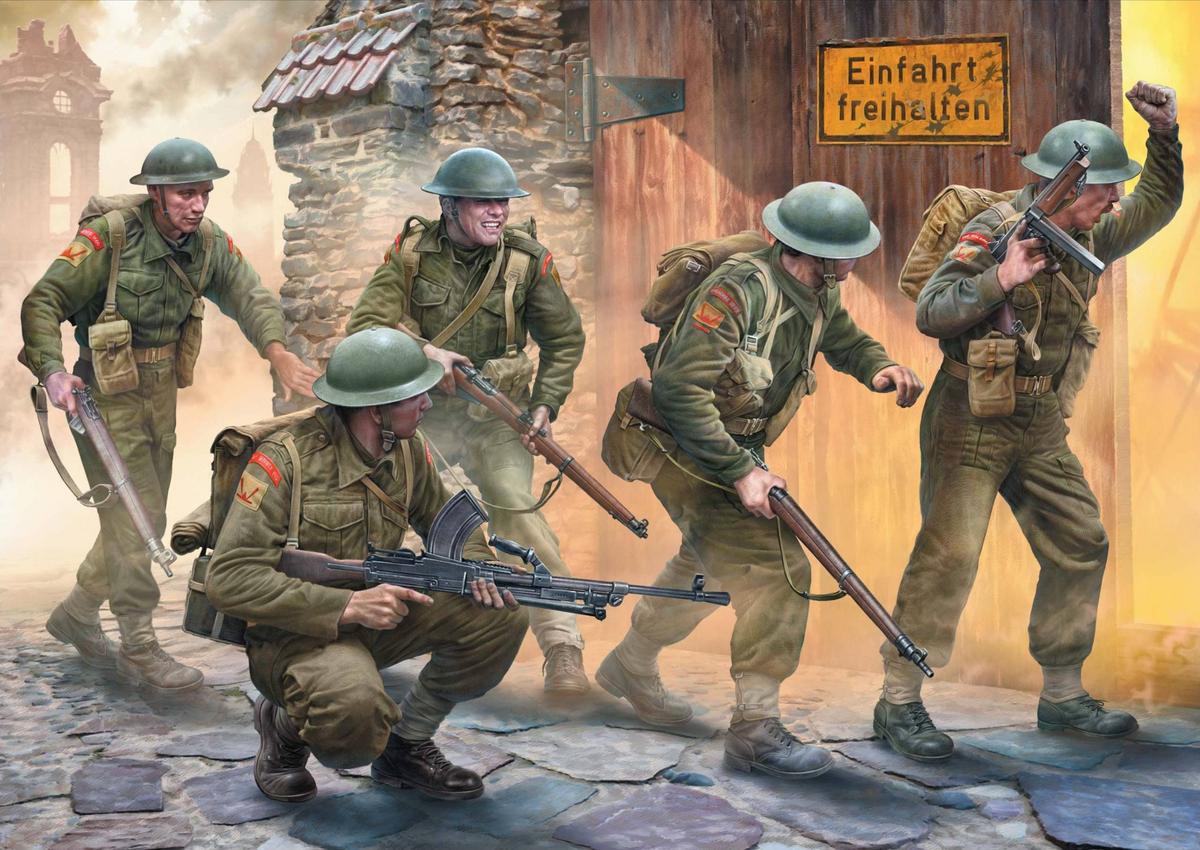 I saw the Norman Rockwell above and remembered this one.

“Norman Percevel Rockwell was an American painter and illustrator. His works have a broad popular appeal in the United States for their reflection of American culture. Rockwell is most famous for the cover illustrations of everyday life he created for The Saturday Evening Post magazine over nearly five decades.”
- Wikipedia

This was actually the cover for the Saturday Evening Post magazine, October 13th 1945 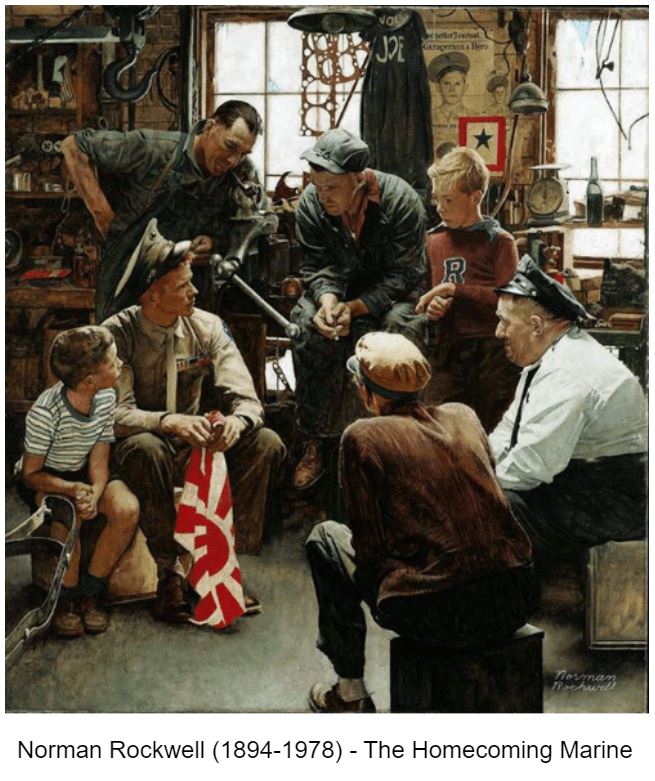 Not all were serious…. 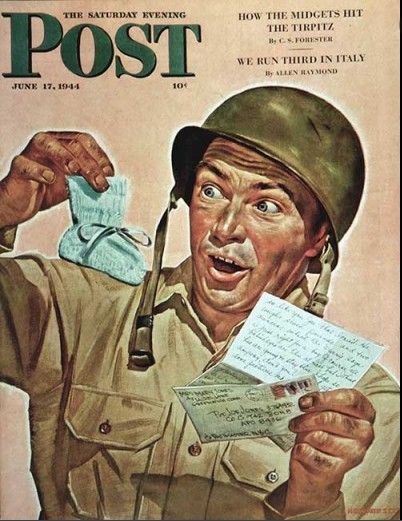 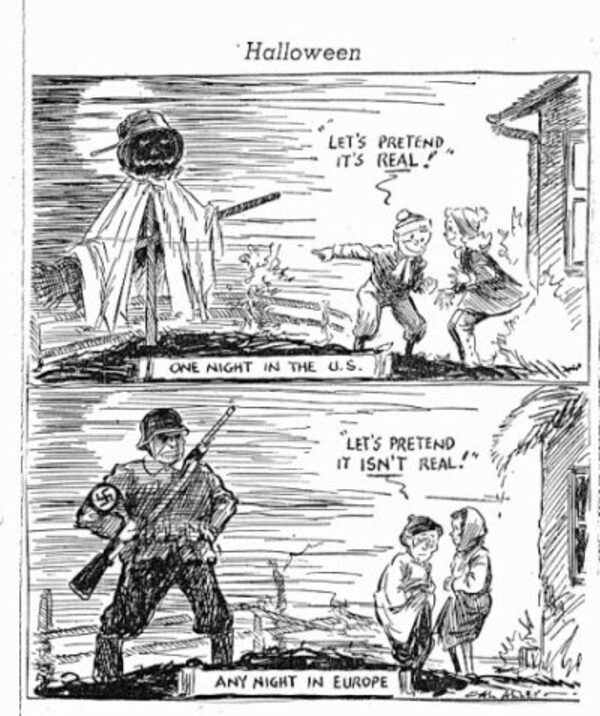 Doolittle before the mission. 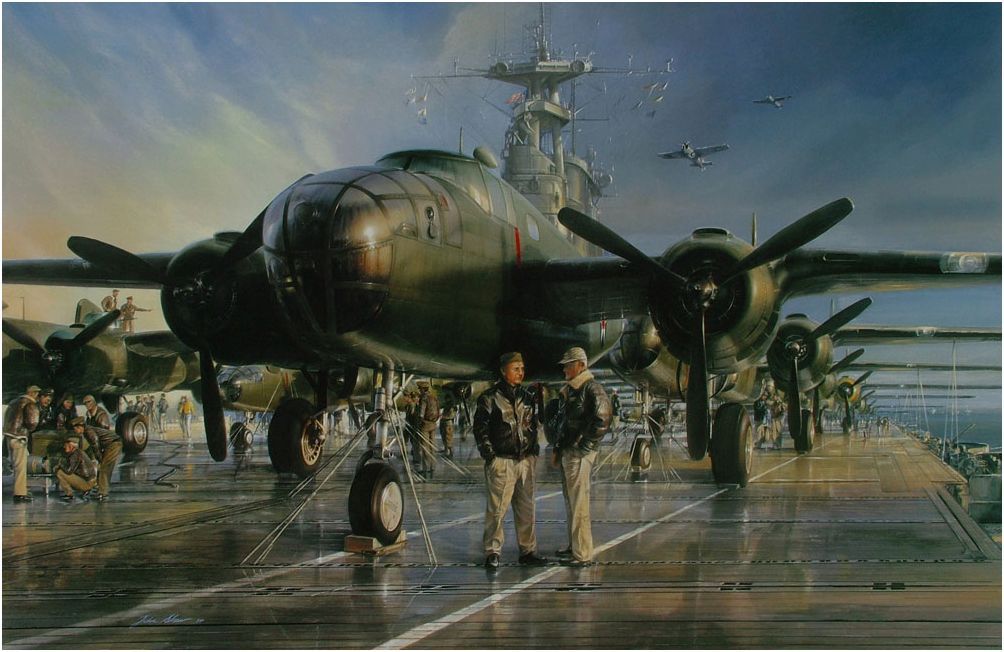