Got this nice map I want to simplify (and make graphically more attractive) and a rule set I want to adapt and also simplify.
For one, cut the number of provinces by more than half) 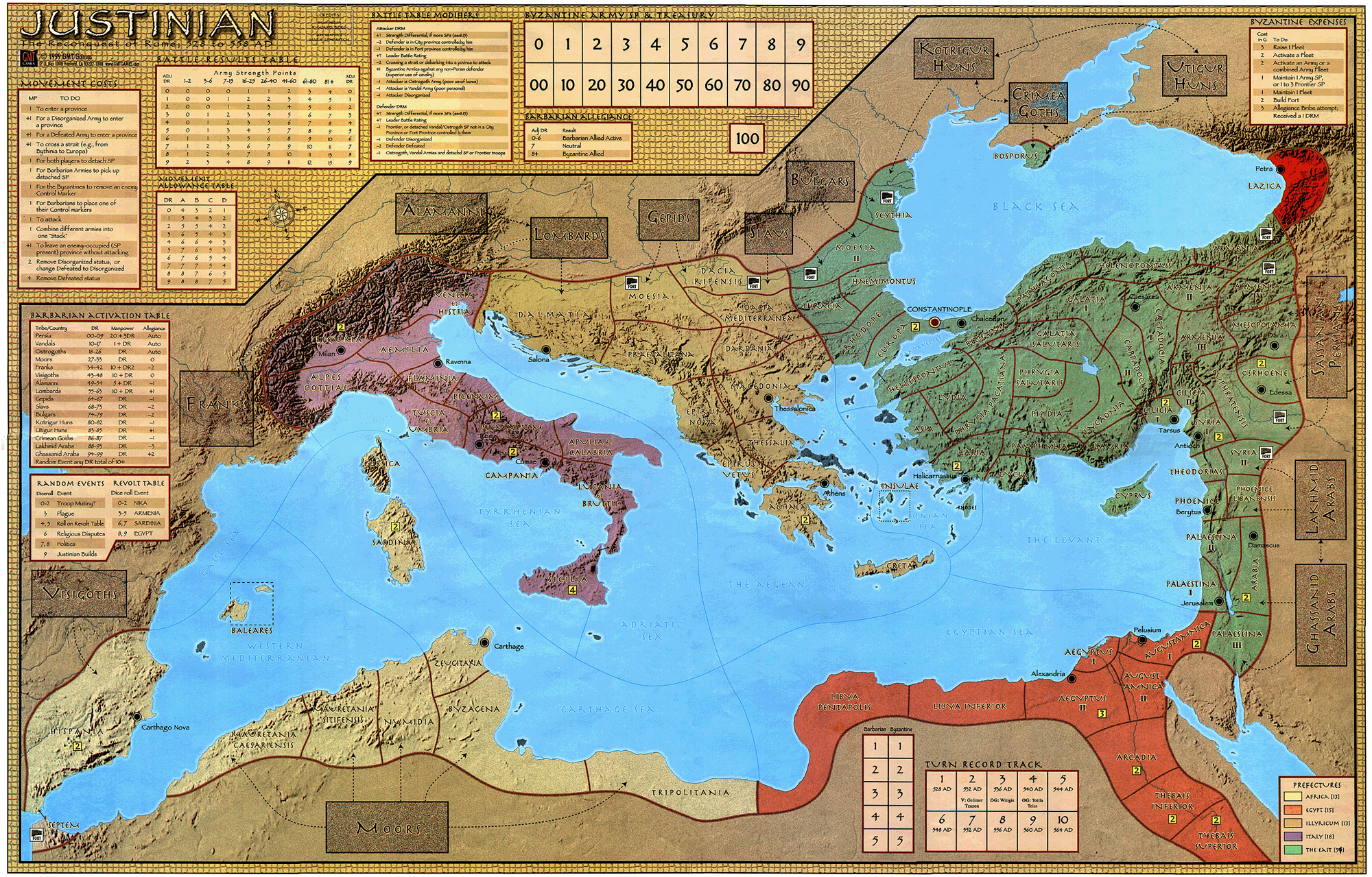 It's the Byzantines under Emperor Justinian and his famed general Belisarius setting out to reconquer the lost western Roman provinces of Italy and North Africa from the Ostrogoths and the Vandals and at same time fighting off other Barbarian incursions and endless advances against the Sassanid Persian Empire.

So, one side would control the Byzantine's campaigns, while the other all the various Barbarian kingdoms and factions and the Persians ( a lot of the Barbarian tribes and kingdoms would activate by random die roll events ) ...

Now would there be enough players interested to play this period ? (before I launch into the design work in earnest) -- I know @Wellsonian is also thinking about creating an Assyrian 600BC campaign -- chariots and bronze!!

You'd need Field of Glory with the Age of Belisarius add-on as a minimum I think.

Totally in! And yes, I am close to opening a “Chariot Lords” campaign (copyright to @Badger73 on the title). More to follow.

This looks great! Count me in @Rico.

Map in first draft production... cleaned up map and reducing provinces (made map from scratch using a satellite photo of med area as underlay -- you can see it's modern by the big dam reservoirs in Russia and on the Euphrates in Turkey and modern Iraq )
Working up new counters ... here on screenshot, Byzantine field armies (who often tended to be regionally based in that period) and frontier forces (aka Barbarian speedbumps) ... still quite a while in testing and simplifying rules etc. -- it'll be a bit more involved than the Roman Civil Wars one... 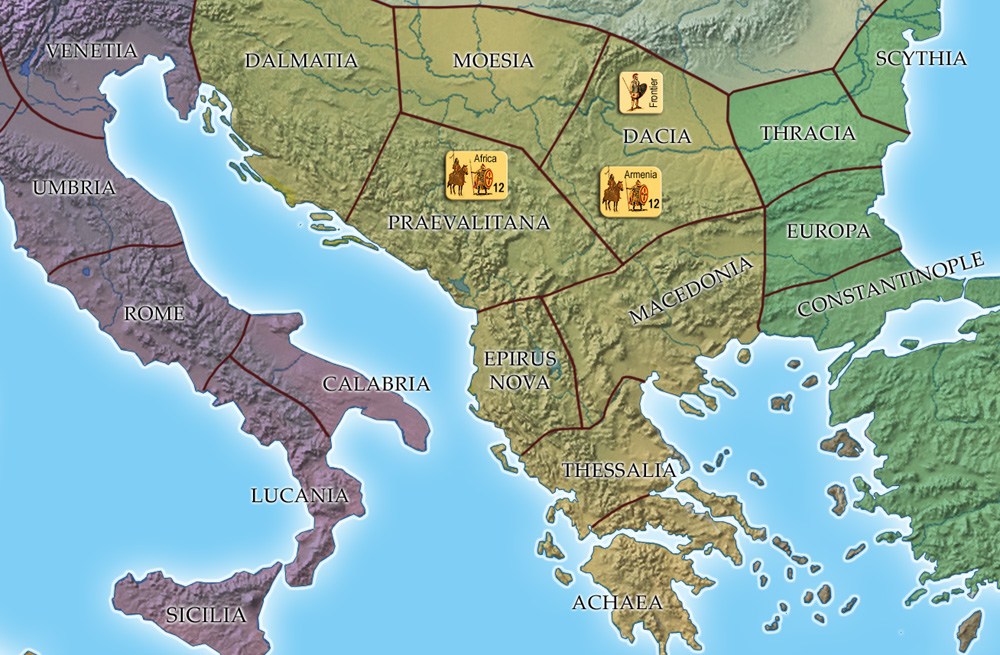 Another teaser screenshot of the campaign map and counters in the works ... coming along nicely...
Byzantine frontier forts and troops, Byzantine armies and fleets, Goth and Vandal armies ... more to come -- there'll be Sassanid Persians, Huns, Franks, Germans... I'll explain my ideas about the army strength points soon as well...

Nice map, will there be sea zones?

That is very well done.

Nathangun said:
Nice map, will there be sea zones?
Click to expand...

Yes -- sea transport of armies will be crucial in this one... hadn't got round to putting those in yet.

Oh man this looks really amazing. I just picked up this game at sale a few days ago and i´m loving it. Still need practice against real opponents but would be great to join this campaign.

Zaba said:
Oh man this looks really amazing. I just picked up this game at sale a few days ago and i´m loving it. Still need practice against real opponents but would be great to join this campaign.

Thanks -- work in progress

Yes, I have thought of using Mare Nostrvm for resolving naval battles ,,, I have the game, but didn't get too far into playing it, so not that familiar with.
Must get have another look at it to see what era it covers. 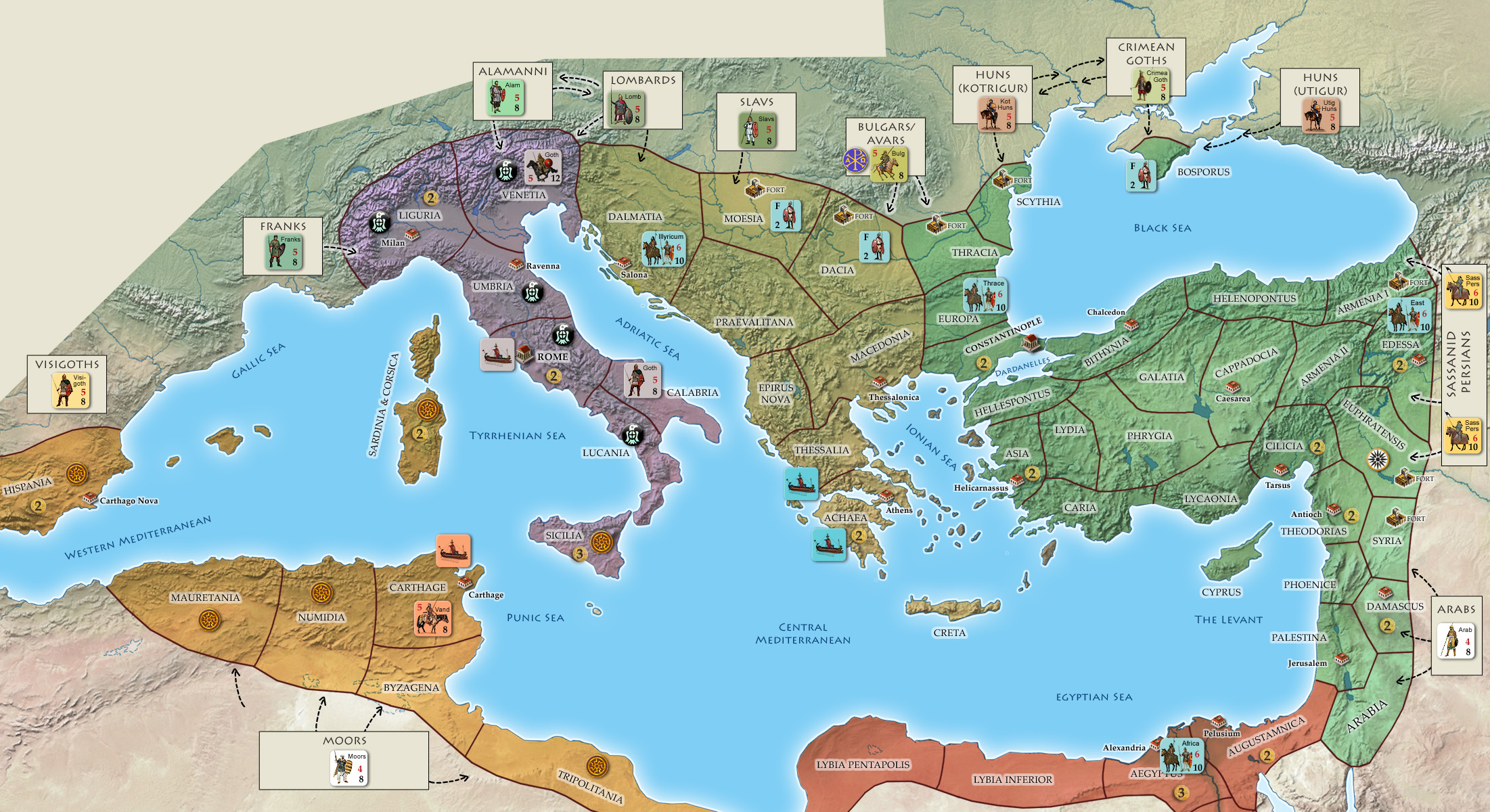 The purple marker in the Bulgars/Avars box indicates a Barbarian tribe allied to the Byzantines (ie: bribes have been paid )

On the counters, the red number is the action/movement points (to be explained in rules) ... the black number the unit's Strength Points (these will be reflected in the size of the army on the FOGII battlefield)