This is just about ready to roll... I have reconfigured this into a THREE faction war (had several different map configurations and die roll determined which one to use) -- and also randomly assigned Faction Leaders and battle commanders to each side. 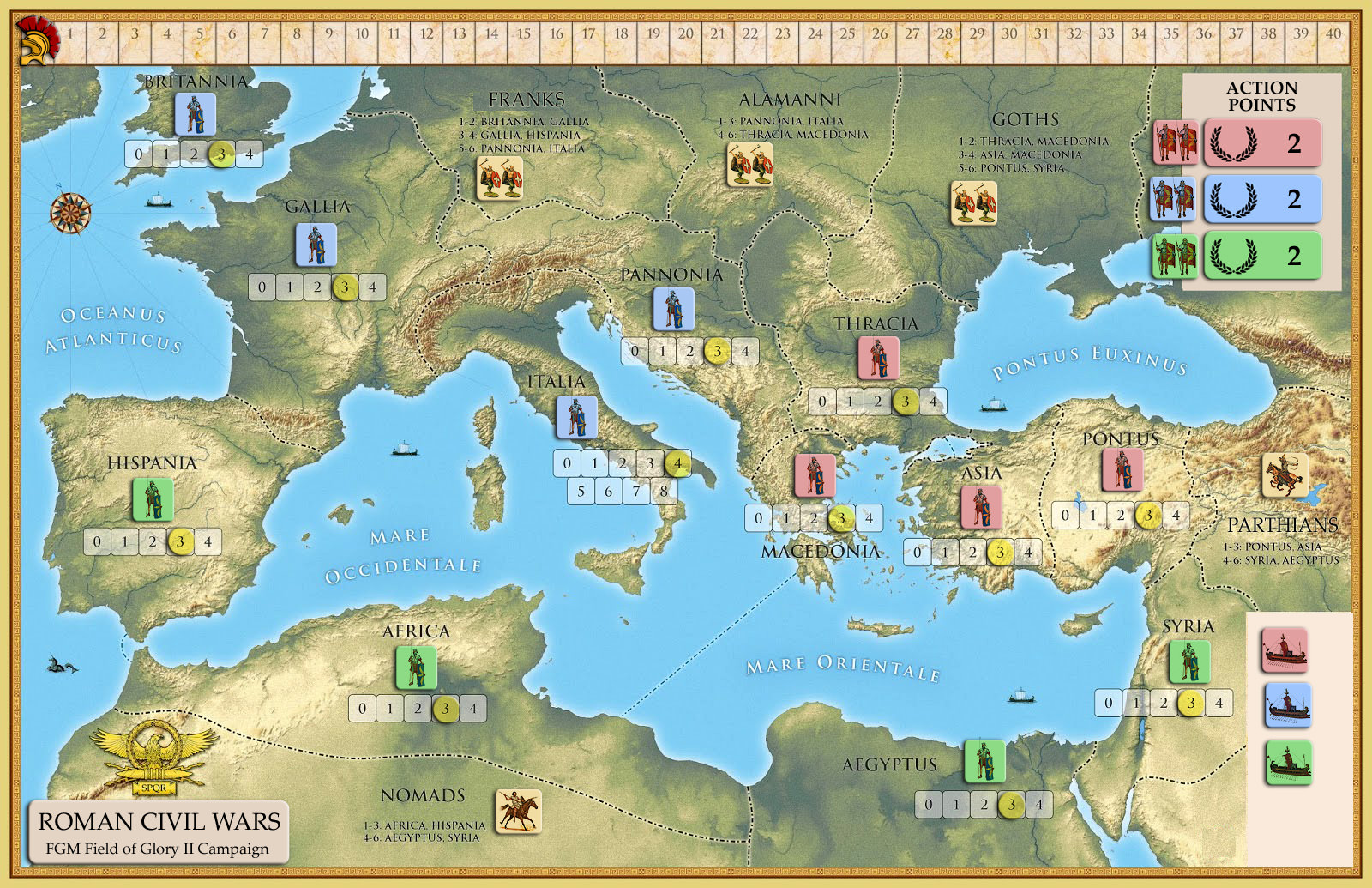 
I have posted a seperate thread for the rules here: http://www.thefewgoodmen.com/thefgm...e-fgm-field-of-glory-ii-campaign-rules.28698/


To get things rolling:

1. Each FACTION needs to let me know where in any one of their provinces they want to deploy their first, free LEGION -- I will set up Conversation message threads with each faction for secretly communicating orders to me.

2. I will then announce where (or if ) a Barbarian incursion will happen.

3. Then FACTIONS will need to send me any naval builds/deployments they want to make (I will then play out any naval battles if there are)

4. Then FACTIONS send me their TURN orders for their LEGIONS... batttle and mayhem will follow.


Here below the part of the rules with the possible ACTIONS each side can perform in each turn: 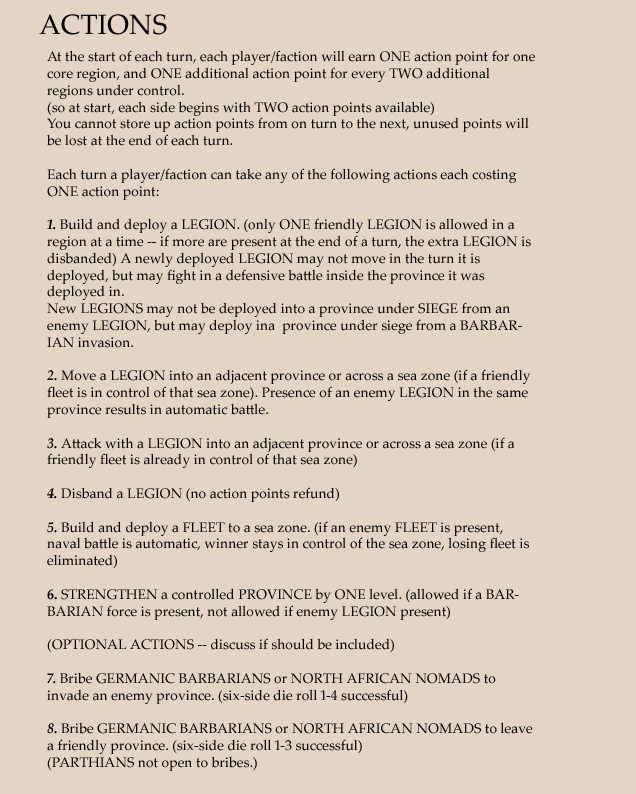 If you still need a battle commander, I'm standing ready (would have also played as a faction leader, but too late, unfortunately).

@Nathangun
Good to see your on my side... best get those pointy things sharpened... Goose feathers plucked, and sacrifice the turkeys a bit early this year.

Peasants have been scarificed and the Oracle has declared we'll be victorious.

Mad Mike said:
If you still need a battle commander, I'm standing ready (would have also played as a faction leader, but too late, unfortunately).
Click to expand...

Yeah -- was waiting to hear from you (tagged you when I posted final rules and called for Faction commanders ) -- thought you lost interest... I can add you to a faction as battle commander.

Quite excited to see how this works -- am quite pleased with the rule set (first time venturing away from 20th Century stuff ... all depends now on how it plays out with real faction commanders at the helm and how the battles end up being played out in Field of Glory II.

Rico said:
Yeah -- was waiting to hear from you (tagged you when I posted final rules and called for Faction commanders ) -- thought you lost interest... I can add you to a faction as battle commander.
Click to expand...

Battle commander it is then, thanks . My bad for not answering in time.

UPDATE: General @Mad Mike has been assigned to the BLUE faction as a second battle commander by random die roll.
Last edited: Dec 17, 2018 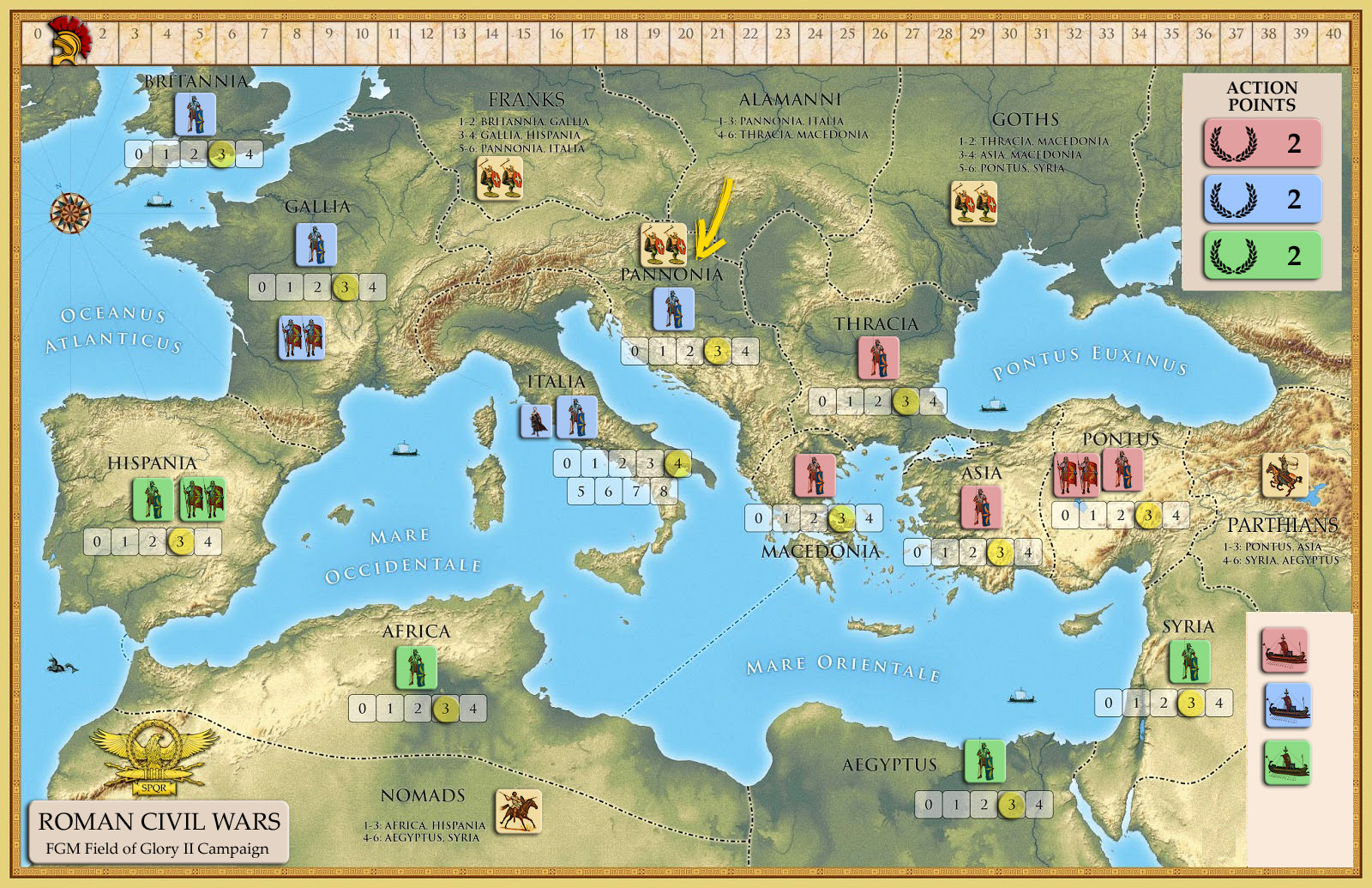 Time to send me your first set of ORDERS via the private message threads -- you each have the princely sun of TWO Action Points to play with . (I will play out the NAVAL deployments and (if any) naval battles first.

What's the little blue unit chit in rome for?

That's to indicate that Wellsonius is "Caesar" by virtue of controlling Rome... for now... maybe not much longer... (just added it in for fun)...

GREEN faction orders are in.

BLUE faction orders are in.

RED faction orders are in.

First TURN orders processed ... and this how it plays out: 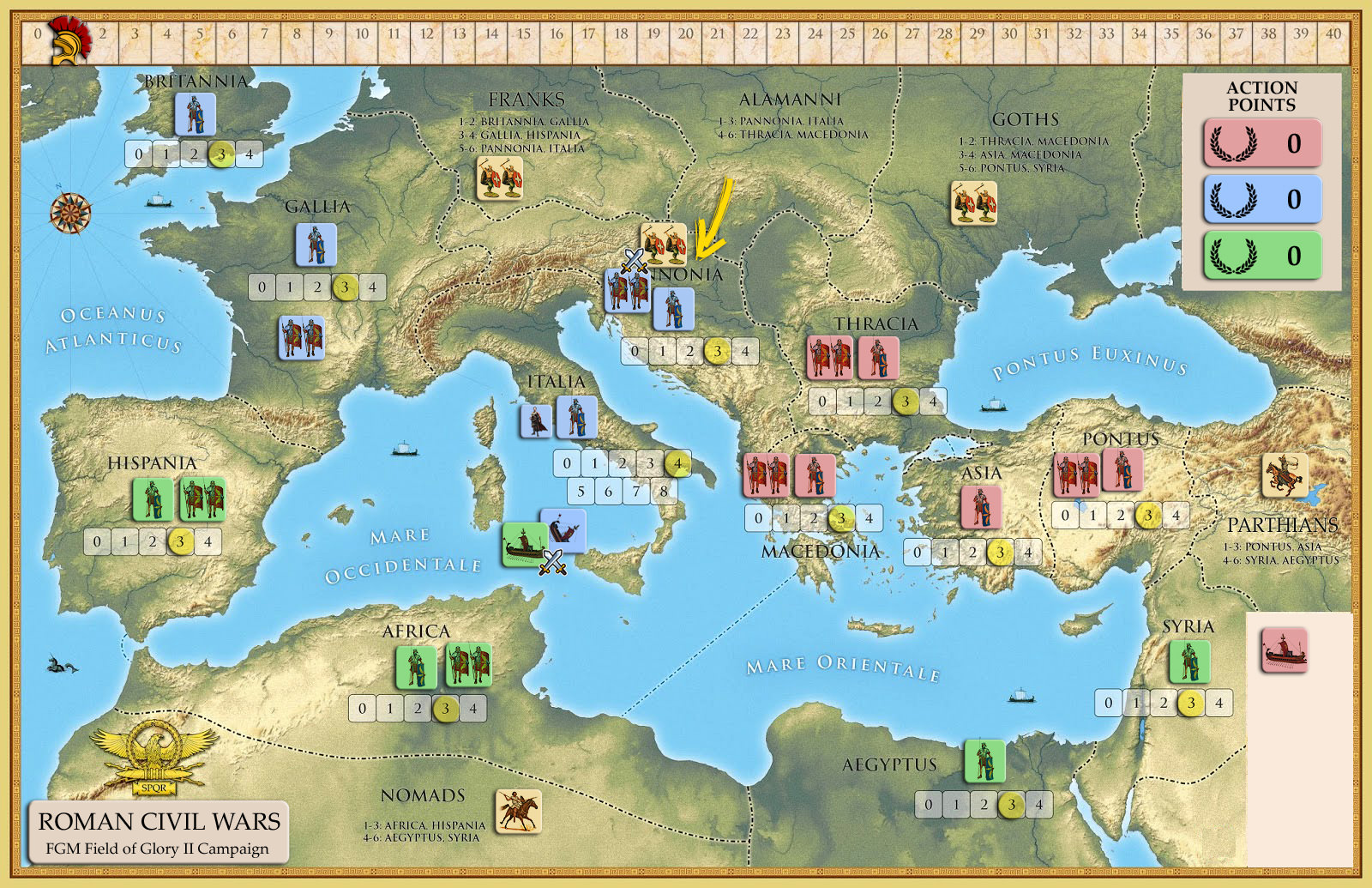 BLUE faction deploys one new legion in PANNONIA to fight the Barbarian incursion, and a fleet into the MARE OCCIDENTALE.

GREEN faction deploys a new legion into AFRICA province and a fleet into MARE OCCIDENTALE as well.

There is only one battle in PANNONIA:

BLUE faction's General Badgerius LXXIII (@Badger73 ) has been assigned command of this battle to oust the ALEMANNI Barbarians out of the province. GM @Rico shall command the Barbarians, will set up this battle immediately.

People should know when they are conquered.