The play of the game is divided into a number of Game Turns.
Each Game Turn is divided into several Phases. See Sequence of Play.
In general terms, both players will be given a number of cards from a deck of cards, then will spend them alternately to conduct different activities with their counters on the map. The game will end in the Final Phase of the final Game Turn, at which time play stops and players judge victory.

Map.
The map depicts the general region where the conflict takes place. During play, units move from one area to another and conduct combat within them.
Some areas are marked with a Victory Point value, which will be awarded to one player if they control it at the end of the game.

Map Displays. Each side also has one or more boxes labelled “Rear Area” which represents off-map or otherwise inviolable military bases, logistical sites and garrisons. Units will move from the Rear Area to areas on the map. Each side also has one box labelled “Damaged Units”. Units that have been damaged in combat are placed here and must be moved out of it into the Rear Area by die rolls or play of Special Action cards.

SETTING UP THE GAME

The defending side may only place National Guard troops within their own border, these units have a stacking value of 3 (stacking limit is 5). All other units must be placed in the damaged box at the start of the campaign, except air units.
The attacking side may place available units were they wish as long as they don't exceed the stacking limit.
Give the 6 of the 'face' cards to each side, red to the attacking side and black to the defending side. These will be the 'Special Action Cards' for both sides.

• Place the Game Turn marker in the “1” space on the Turn Record Track on the map. 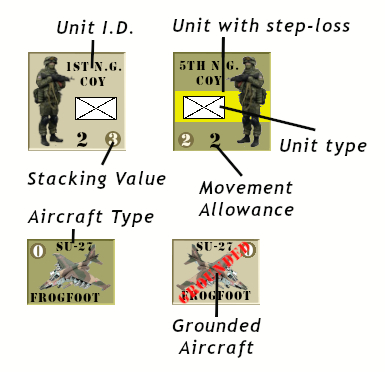 All units can move two hexes along a road except mortars, they can only move one and fire.
Any movement into clear hexes cost two movement points, movement into wooded areas is forbidden to all mech units, N.G. units may move into a wooded area and stop it's movement.

Any side may designate undamaged air units for support in the CM Battle that are already in the Battle area or if there is a mortar battery in an adjacent area it may be used as off map support, note that the mortar battery may only support one battle at a time.
If there are already enemy air units in the area air-to-air combat is resolved first.

Victory is declared in a battle when all enemy units are driven from the battlefield, regardless of the combat mission end screen resolution.
If any of the enemy troops are still in fight after the battle (they have 50%+ in strength) the sector is considered contested.
If and when the next battle in the same sector starts, the occupation of captured CP's determines the set-up area for both sides.
The defending side is considered to have 'occupied' all CP's before battle.
If a N.G. unit that has it's combat strength reduce to 50% - 70%, they start the next battle 'nervous'.

Only the National Guard units can be 'nervous' has they are conscript troops, the mech and armor troops have more staying power as they are better trained.

Each Combat Mission battle map will have several CP's, these are not for points value but rather to show where units set-up for the next battle on that battle map.
So if an attacking force moves up the map but doesn't kill off the defending forces at least the ground captured will be held.

Any abandoned vehicles can be captured.

If fighter air units are present in an area with enemy air units, then the fighter units may engage enemy air units in combat before ground unit combat is resolved. Each player with fighter air units present rolls a number of d6 simultaneously. A “5” or “6” on a d6 scores a Hit and is damaged.
It'd be quicker if the GM resolves the air to air combat, just to keep things moving along.

• An air unit that is damaged and is placed (face up) in the Damaged Units box.
Any air units that survived the air-to-air combat may assist their ground-pounder comrades. Note: unlike ground units, air units do not retreat.
• If attacking an air base (7.2), an the air base air defense rolls a 2D6, on a 5 or 6 the attacking air unit is damaged and goes to it's 'Damaged Box'.
Please note that each air base has a inherent air defense, the air defense unit chit (like the Tunguska unit at the air base) is another layer of defense. It rolls 1D6 and on a 5 or 6 it scores a hit. This unit may be moved of course.
• If an attack on a airfield is successful, (a 5 or 6 on a D6) the airfield is damaged and will need repair, which happens in the 'Final Phase' (8.0)
All air units at the base are considered 'grounded' until the air base is repaired.

A player may declare they wish to retreat from a contested sector during their movement, but they may not retreat into a sector already occupied by the enemy.

If at the end of a given battle all enemy units in the entire Battle area have been damaged or driven from the sector, any winning side mechanized type units involved in that battle that are still 'undamaged' may move into one adjacent area.

Example:
The 1st Armored, 2nd Mech Plt and the 1st N.G. attack across the border and engage the 5th N.G. 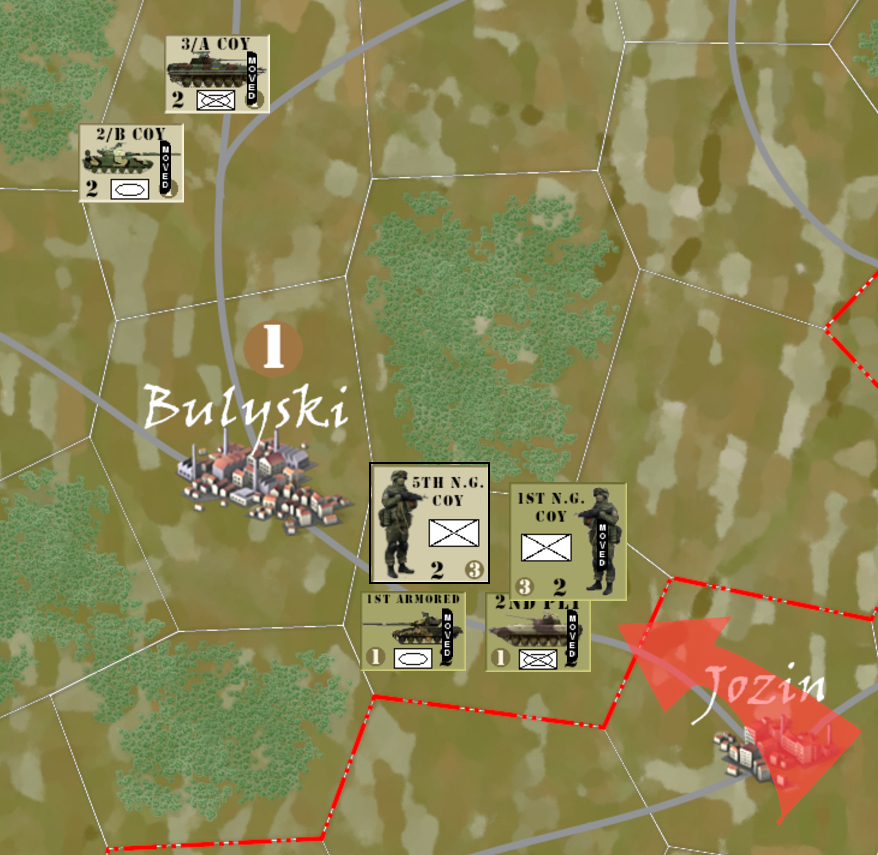 They defeat the 5th N.G. and advance one sector. 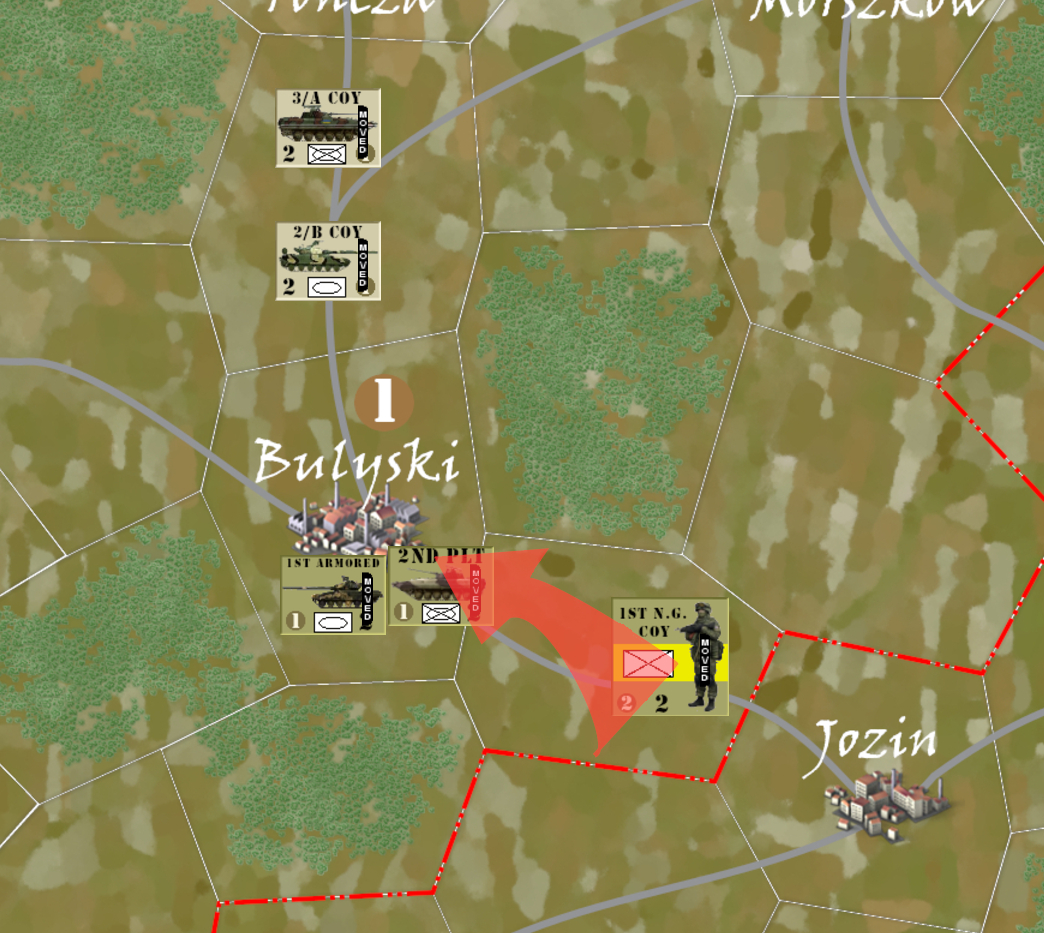 When in enemy territory, the attacking side must draw supply along the roads back to its home country.
If the supply link is broken, at end of the turn the unit is considered out of supply.
Once out of supply, it costs two movement points to move one sector along a road and will have a low ammo supply in the Combat Mission battle.
All captured towns must be garrisoned especially ones that run along a supply route.
The defending side units are always in supply in any area within their own border.

A player may do the following by playing a Special Action card:
• repair ALL ground units on the map, or
• repair ALL disrupted air units currently in the Rear Area, or
• move ALL units (ground and air) from the Damaged Units box into the Rear Area.

• Airfield: roll x number of aircraft by 1D6 (two aircraft then 2 D6). Hits on a 5 or 6 the airfield is damaged.
The airfields defense still has a chance to return fire and
the defender rolls 2D6, on a 5 or 6 they inflict hits on the attacking aircraft.
If successful, air units are grounded until the airfield is repaired.
• Interdiction into the Rear Area: These missions simulate strafing enemy columns traveling along roads or bombing bridges, supply dumps etc.
Same as an attack on a airfield, except there's no return fire.
For a 'HIT' a hit marker is placed in the rear area.

When both players have moved and resolved the battles, the Game-turn enters the Final Phase. If this is the final Game- turn, the game ends and players judge Victory. If not, then:

• All air units return to their respective air bases.
• Any 'Hit' marker might be repaired by rolling 1d6. Damaged units in the 'Damaged Box' might be rebuilt on a roll of “5” or “6” the Damaged Units box is moved to the Rear Area.
• Check Supply
• Advance the Game Turn marker to the next higher numbered space on the Turn Record Track.

If the attacking side as 6 or more VP's at the end of the campaign it is considered the winner.

You'll need a copy of vassal for this campaign. Download the latest module here.
I will create two Drop Box folders, one for the attacker and another for the defender, in it the GM will place a log file for the players.
When the commander gets the vassal logfile, he goes through these steps:

2. Launch Vassal and then the module you are playing.

3. In the Welcome Wizard, under Select play mode, choose Load a Saved Game.

5. Click Next. If this is your first turn, you may be prompted for additional Wizard steps.
Follow the other steps as required. Otherwise, skip to step 6.

8. Name and choose a location for the log file.

9. In the Comments window, enter any comments you wish about the log file. This comment
will be displayed in the Module Manager.

10. Take your turn as usual. Vassal logs your moves and chat as you make them.

11. When done, click File > End Logfile. The logfile is saved.

12. Email the log file to your opponent as an attachment (put it in the DB folder).

13. Each player repeats these steps until complete. 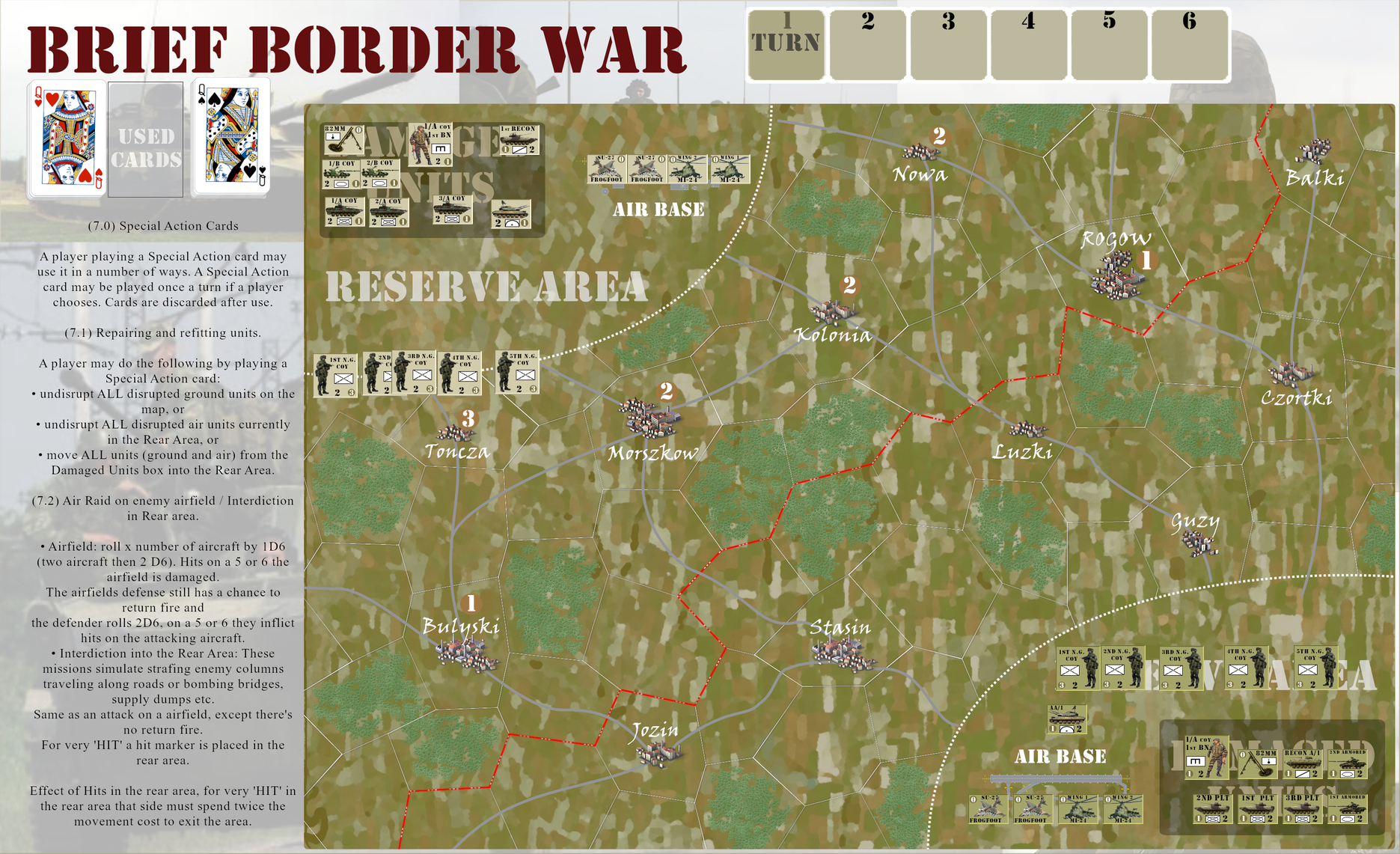