Léo Major, the only Canadian and one of only three soldiers in the British Commonwealth to ever receive the Distinguished Conduct Medal (DCM) twice in separate wars. 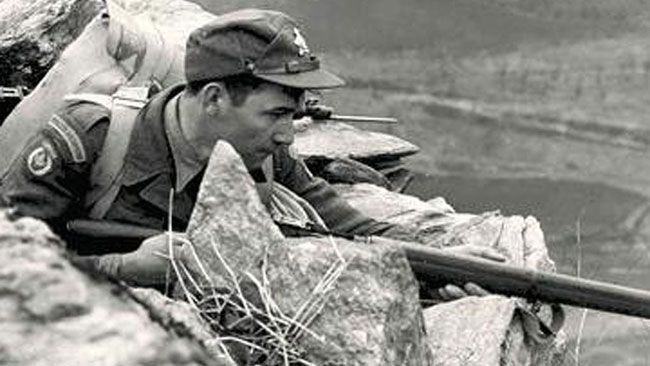 Major was born on Jan 23, 1921, New Bedford, Massachusetts, to French-Canadian parents (while his father was working for the American Railroad Company) in the U.S. but moved with his family back to Montréal when he was very young.
Major enlisted in the Canadian army when he was 19 years old and was sent overseas in 1941. He was amongst the Canadian forces that landed on the beaches in the D-Day. A couple of days later he was injured by a phosphorus grenade while fighting a group of German SS soldiers, and he lost partial vision in his left eye; he refused to be evacuated back to England because he needed only his right eye to sight a rifle.

On April 1945, Major, a private at the time, volunteered to sneak into the Dutch town Zwolle under the cover of darkness and reconnoitre, accompanied by his friend in the forces, Cpl. Willy Arsenault.

Arsenault was killed early on in the mission, and in his grief and rage, Major decided to do something unthinkable. He took his comrade's firearms and munitions and charged the city, alone.

Zwolle, located about 100 kilometres east of Amsterdam, was then a town of 50,000, but it didn't take Major long to locate a German soldier and disarm him. He spoke to the soldier in French, employing a risky gambit that ultimately paid off.

Major managed to convince the German soldier that the town was surrounded by Canadian troops, and that if the Germans left right away, they would be spared. He let the Nazi soldier go to relay the message but fearing his bluff would not stick, Major started to run through the streets of Zwolle firing his machine gun and setting off grenades. As if this wasn't enough, Major located the Gestapo headquarters and set the building on fire. He also took dozens of German prisoners, with the help of some local resistance fighters.

After WW2 he volunteered for service in the Korean War in 1950. In Nov of 1951, he was tasked to recapture Hill 355, which had been taken from American troops by the Chinese army. Taking a group of about 20 other snipers and scouts, Major and his men infiltrated the Chinese camps and commenced firing, scattering the Chinese army. For three days they held the hill against counterattacks, sometimes calling down supporting artillery fire so close to their position that their commanding officer could hear the bombs exploding through the walkie-talkie. Major was awarded a bar to his Distinguished Conduct Medal for this action.

After his military career, Major returned many times to the town of Zwolle, establishing close ties with the townsfolk and having a road named after him. 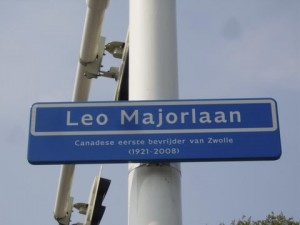