We are getting close to a draw which will be like a victory - keeping the Great Satan at bay. So let's throw everything we have at him now. Nothing to lose. Daylight turns are to our advantage as NATO won't have benefit of their night vision equipment.

TF Nawa:
4 VBIEDs
6 Technicals
3 Spies
Commander with balls required for this one.
So my idea here is to use pre-planned arty to lay down a smokescreen for the VBIEDs to rush in and hopefully blow some holes in the enemy defence and try to exploit the following chaos.

TF Masyaf:
2 IEDs
3 Spies
Should be pretty straight forward. City with close quarters, should allow for plenty of ambushes and the US vehicles have harder time to be effective.
TF Masyaf though is fatigued due to previous battles has suffered some casualties. But it still is fanatic and one of our best equipped units. I also played one of the reinforcement action cards for this TF so some of those casualties should be replaced.

TF Palmyra:
2 VBIEDs
4 Techicals
4 IEDs
4 Spies
Gonna be a tough one not gonna lie. Big and relatively open map, some small elevation changes you could use to hide the VBIEDs for an ambush. The large area allows for the option of more dispersed fighting, no need to necessarily pack every single fighter into the town to be massacred in a single arty strike.

I also ordered a raid against NATO supply convoys so all three of the NATO TFs should enter the battle with only scarce supply.

@Bootie , @JTimo , @mcmortison any volunteers or do I have to start voluntelling people or take command of one of the battles personally?

Just assign me any battle... ready to do my bit!

Sorry @Vartuoosi, RL has me too stacked to take one at this time

@Vartuoosi
Can you lock in commander names for the battles ASAP under each of the new briefing threads. Save files are with the NATO side right now. They are just waiting on opponent names.

Apologies. Caught up on the weekend. Slight delay before processing the end turn and setting up the next one.

I fucked up by not shuffling around some of the task forces last turn. The big problem here is that TF Homs is currently in map 14. TF Homs is our largest unit with gear that actually has some punch and map 14 is about the size of a phone booth. So a single 155mm salvo will easily wipe out half of the TF on that map, no matter how you deploy. So TF Homs would be far more useful on map 12 which is a very large urban area, where you can properly disperse the troops and place vehicles into a keyhole positions. But with TF Masayaf destroyed map 10 is now clear and NATO is free to move onto map 14.

So instead of a just sitting there and taking it, I'm thinking of moving TF Homs to map 12, TF Latakia to map 13 and TF Al Furqlus will hop on over to map 14 to cover the repositioning. TF Al Furqlus might end up having to conduct an attack or end up in a meeting engagement depending on whether TF Sparta moves forward or if NATO brings up an other unit from the rear.
TF Daraa could also try to move to map 10 to act as a blocking force.
This might end up with those uncon units being thrown to the wolves but I'd rather save the combat power of Homs for now instead of wasting it on an extremely disadvantageous map(doubly so for this tiny map since NATO doesn't even bother to leave their setups anymore).
But we should be getting two new uncon units since NATO now controls 9 maps total and TF's Masayaf and Palmyra are dissolved(since it's trying to retreat to an already occupied map).

Nevermind, ignore that last post. I just saw the post Ith made on the CO thread.
I'll get back to the drawing board after I get back from work.

New plan.
TF Daraa will hold map 11 and I will be using the fanatics-action card to reinforce them just in case.
TF Homs will immediately go balls deep and attack into map 10, hopefully blocking NATO's attempts to move into map 11 or 14. Since TF Sparta seems to be at pretty low strength NATO will probably try to bring Epirus/Corinth to the fore from the rear. This ought to give Homs a window to move to map 10 and block any further movement.
TF Latakia will move to map 14 and secure the area.
TF Qarah will deploy to map 12 and secure the area.
That's the best I can come up with.

Both sides have draft plans. Just need both sides to lock them in.

TF Palmyra:
5 VBIEDs
4 spies
1 technical (Palmyra has 3 surviving techs from the last battle, hopefully we can get a replacement for the lost SPG one)

I'll sketch out some battle plan ideas on the individual threads.

Campaign Turn 7 is away. Deployment for a few of these are going to be a pain so give your opponents some slack in getting initial files back. I can't say much but the campaign is actually on a knifes edge even if may not feel it. Judging by plans I'm reading in both HQ's, not knowing the enemy's overall campaign objective for certain seems to be working as intended. I expect some shocked commanders this time around.

@Bootie
Since it looks like we two are the only ones still active here, feel free to pick whatever battles you like.

@Ithikial
I hope you remembered to account for that quirk with the Syrian supply settings.

Guys, the surgery I had planned for was postponed due to Covid-19 so I'm still not in shape to take battles. If necessary my place in the campaign can be taken by someone else.

I actually dont mind which one I get Vart... just let me know.

Bootie said:
I actually dont mind which one I get Vart... just let me know.
Click to expand...

If you are tired of map 10 I'm fine with taking the Homs fight.
The Latakia fight is THE important fight at the moment so all the pressure would be on you. But not to worry in the case that Assad gets Mossad'ed for I have a cunning plan to mitigate the damage based on these:

So what type of balance are you aiming with this campaign?
10% Hollywood flair.
Click to expand...

Role play?
The safe word is... oh wait. Both Overall Commanders are expected to be 'in character' at times to answer questions and resolve issues that will affect the campaign outside of CMSF2 battles. It's a small twist to help keep things interesting while we wait for the battles to be played out.
Click to expand...

Of course I'm aware that this plan hinges on the fact that I'm gonna have to convince an Australian to stop being a shitposting cunt for a minute, but you never achieve anything without taking risks.

Vartuoosi said:
Of course I'm aware that this plan hinges on the fact that I'm gonna have to convince an Australian to stop being a shitposting cunt for a minute, but you never achieve anything without taking risks.
Click to expand... 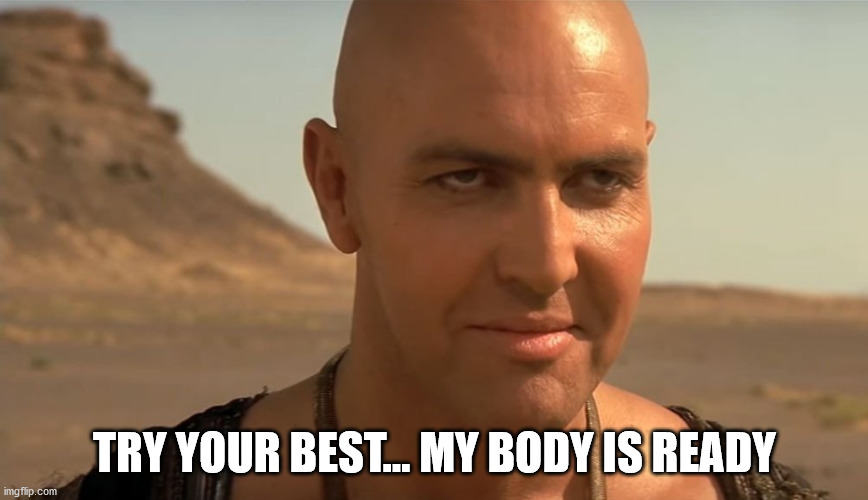