Taihō was an aircraft carrier of the Imperial Japanese Navy during World War - Her name means "Great Phoenix".

Built by Kawasaki at Kobe, she was laid down on 10 July 1941, launched almost two years later on 7 April 1943 and finally commissioned on 7 March 1944. She sank on 19 June 1944 during the Battle of the Philippine Sea after suffering a single torpedo hit from the American submarine USS Albacore, due to explosions resulting from poor damage control.

The deckâ€™s thickness was in the range of 75 to 80mm. The Japanese believed that this level of reinforcement would have allowed the deck to withstand hits from up to 1,000lbs of free fall bombs. An armored belt of 5.9â€ circled the hull structure. But, as with most of Japanâ€™s other carriers design, the Great Phoenix lacked armored platting hangars, a design flaw that would prove to be fatal for the entire carrier fleet.

Taiho first extended combat action saw her launching strike aircrafts against a US carrier fleet in the morning of June 19th, 1944, when she was hit by one torpedo from the USS Albacore. The impact wave of the hit cracked the main aviation fuel tanks in the forward elevator area. As the fuel began to mix with sea water, the carrierâ€™s crew demonstrated their under training in damage control tasks, a weakness that had already proven fatal to many of their companions in other flatbeds. They opened all hatches around the shipâ€™s two hangar areas in an attempt to steam the water flow. It was to no avail. Because just four hours after the impact, the damage control crew turned on all of the hangarâ€™s extractor fans thus setting up a massive explosion the blew the sides of the hangars. At this moment, the resulting fires began to consolidate and a second, most violent explosion shook up the ship. The hull was compromised and power was lost. Two hours later, the ship buckle under its own weight finally sinking with around 400 men trapped below the rupture deck.- 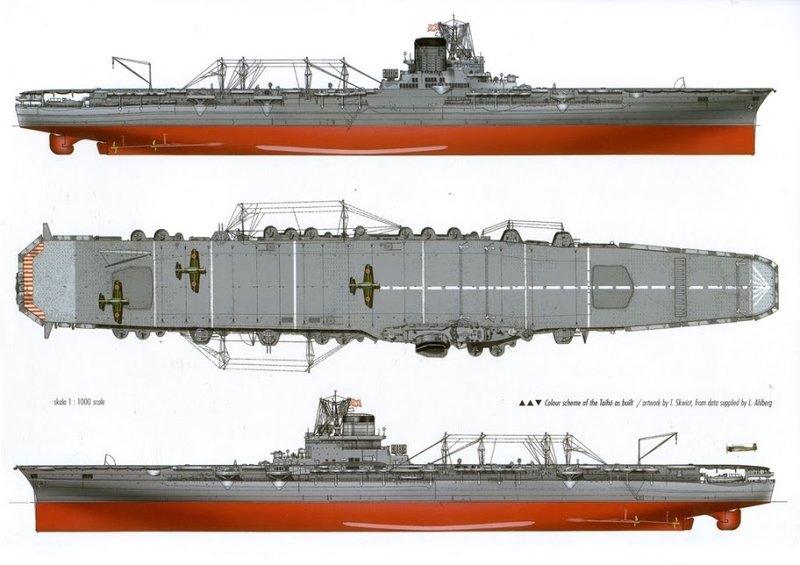