The Crimean War, also known in Russia as the Oriental War (Russian: Восточная война, Vostochnaya Voina) (October 1853/February 1856) was fought between the Russian Empire on one side and an alliance of France, the United Kingdom, the Kingdom of Sardinia, and the Ottoman Empire on the other.

The war was part of a long-running contest between the major European powers for influence over territories of the declining Ottoman Empire. Most of the conflict took place on the Crimean Peninsula, with additional actions occurring in western Turkey and the Baltic Sea region.

The Crimean War is sometimes considered to be the first "modern" conflict and "introduced technical changes which affected the future course of warfare".

Conflict over the Holy Land

The chain of events leading to France's and Britain's declaring war on Russia on 27 March and 28 March 1854 can be traced to the coup d'Ã©tat of 1851 in France. Napoleon III had his ambassador go to the Ottoman Empire to force the Ottomans to recognize France as the "sovereign authority" in the Holy Land.

Russia disputed this newest change in "authority" in the Holy Land. Pointing to two more treaties, one in 1757 and the other in 1774, the Ottomans reversed their earlier decision, renouncing the French treaty and insisting that Russia was the protector of the Orthodox Christians in the Ottoman Empire.

Napoleon III responded with a show of force, sending the ship of the line Charlemagne to the Black Sea, a violation of the London Straits Convention.

France's show of force, combined with aggressive diplomacy and money, induced Sultan AbdÃ¼lmecid I to accept a new treaty, confirming France and the Roman Catholic Church as the supreme Christian authority in the Holy Land with control over the Christian holy places and possession of the keys to the Church of the Nativity, previously held by the Greek Orthodox Church.

Tsar Nicholas I then deployed his 4th and 5th Army Corps along the River Danube, and had Count Karl Nesselrode, his foreign minister, undertake talks with the Ottomans. Nesselrode confided to Sir George Hamilton Seymour, the British ambassador in St. Petersburg, the dispute over the holy places had assumed a new character - that the acts of injustice towards the Greek church which it had been desired to prevent had been perpetrated and consequently that now the object must be to find a remedy for these wrongs. The success of French negotiations at Constantinople was to be ascribed solely to intrigue and violence - violence which had been supposed to be the ultima ratio of kings, being, it had been seen, the means which the present ruler of France was in the habit of employing in the first instance.

As conflict loomed over the question of the holy places, Nicholas I and Nesselrode began a diplomatic offensive which they hoped would prevent either Britain's or France's interfering in any conflict between Russia and the Ottomans, as well as to prevent their allying together.

Nicholas began courting Britain through Seymour. Nicholas insisted that he no longer wished to expand Imperial Russia, but that he had an obligation to Christian communities in the Ottoman Empire.

The Tsar next dispatched a diplomat, Prince Menshikov, on a special mission to the Ottoman Sublime Porte. By previous treaties, the Sultan was committed "to protect the Christian religion and its churches". Menshikov attempted to negotiate a new treaty, under which Russia would be allowed to interfere whenever it deemed the Sultan's protection inadequate. Further, this new synod, a religious convention, would allow Russia to control the Orthodox Church's hierarchy in the Ottoman Empire. Menshikov arrived at Constantinople on 16 February 1853 on the steam-powered warship Gromovnik.

Menshikov broke protocol at the Porte when, at his first meeting with the Sultan, he condemned the Ottomans' concessions to the French. Menshikov also began demanding the replacement of highly-placed Ottoman civil servants.

The British embassy at Constantinople at the time was being run by Hugh Rose, chargÃ© d'affaires for the British. Using his considerable resources within the Ottoman Empire, Rose gathered intelligence on Russian troop movements along the Danube frontier, and became concerned about the extent of Menshikov's mission to the Porte. Rose, using his authority as the British representative to the Ottomans, ordered a British squadron of warships to depart early for an eastern Mediterranean cruise and head for Constantinople.

However, Rose's actions were not backed up by Whitley Dundas, the British admiral in command of the squadron, who resented the diplomat for believing he could interfere in the Admiralty's business. Within a week, Rose's actions were cancelled. Only the French sent a naval task force to support the Ottomans.

Charge of the Light Brigade:
"A 2010 view of the valley, taken from the south. The charge was from left to right, with the Russian batteries at the extreme right, and cross-fire from the Heights, centre"

Bombardment of Taganrog during the war in 1855.-

English nursing reformer Florence Nightingale (1820 – 1910), who became the first woman to receive the Order of Merit for her tireless efforts during the Crimean War.-
Last edited: Jul 9, 2017

Colorized pic of Sergeant MacGregor, Scots Fusiliers Guards. The four bars on his Crimean War Medal indicates he was present at no less than four of the main engagements - Alma, Balaclava, Sebastopol and Inkerman. Views of the ruined interior of the Great Redan, one of the six main redoubts which defended Sevastopol (1855). 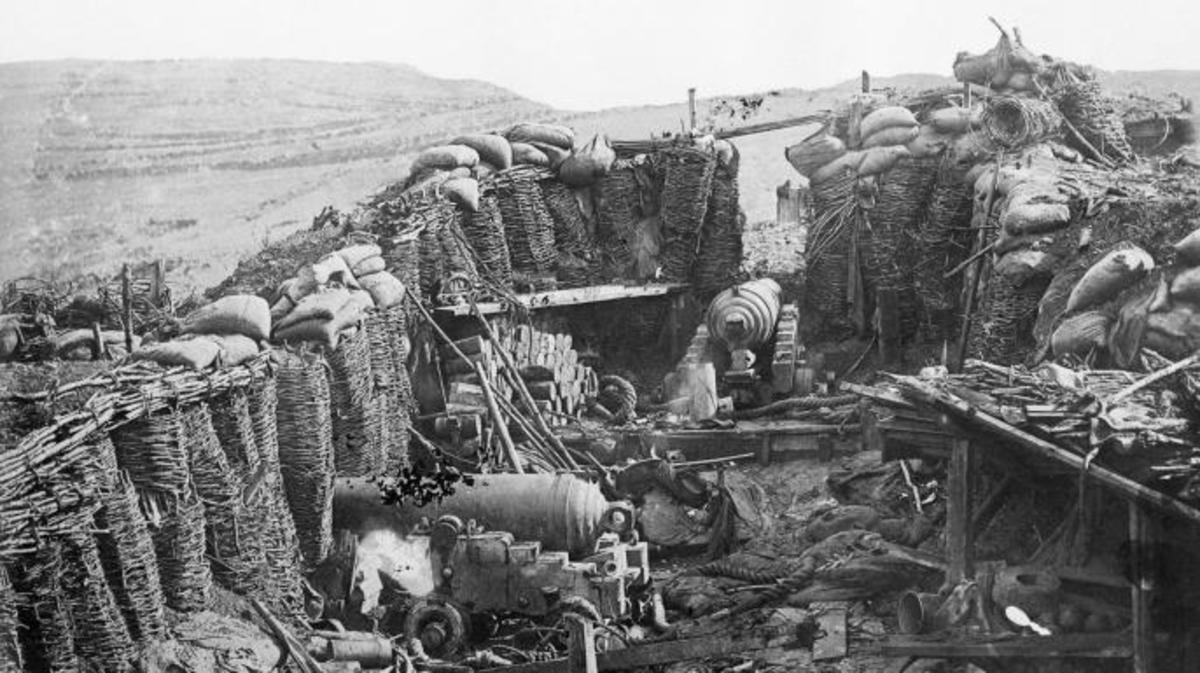 Louis said:
Colorized pic of Sergeant MacGregor, Scots Fusiliers Guards. The four bars on his Crimean War Medal indicates he was present at no less than four of the main engagements - Alma, Balaclava, Sebastopol and Inkerman.

Colour Sergeant William McGregor (Regimental Nº 2404), 1st Battalion Scots Fusilier Guards, July 1856. He was wounded during the Battle at the River Alma on 20th September 1854 and wears both the British Crimea and the Order of the Medjidie Turkish medals.
At the Crimean War’s end, troops gathered in Aldershot for a London victory parade. McGregor was among the soldiers photographed in Aldershot by Robert Howlett and Joseph Cundall for their series of portraits entitled ‘Crimean Heroes 1856’. (IWM Q 71634) 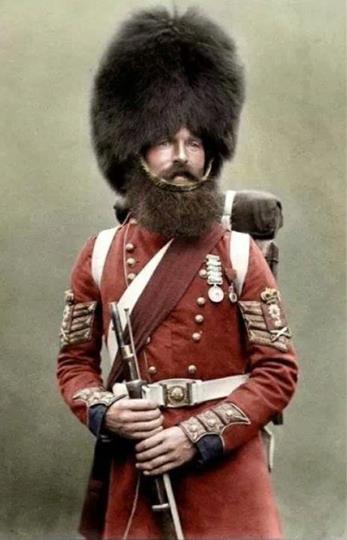 Found this picture on the Aldershot Historical Website......quality. The following write ups were with it...... Colour Sergeant William McGregor (Regimental Nº 2404), 1st Battalion Scots Fusilier Guards, July 1856. He was wounded during the Battle at the River Alma on 20th September 1854...

This is a fabulous photograph - he looks like the sort of bloke you wouldn't want to mess with.

British soldiers at a relax moment during the Crimean War (1855) 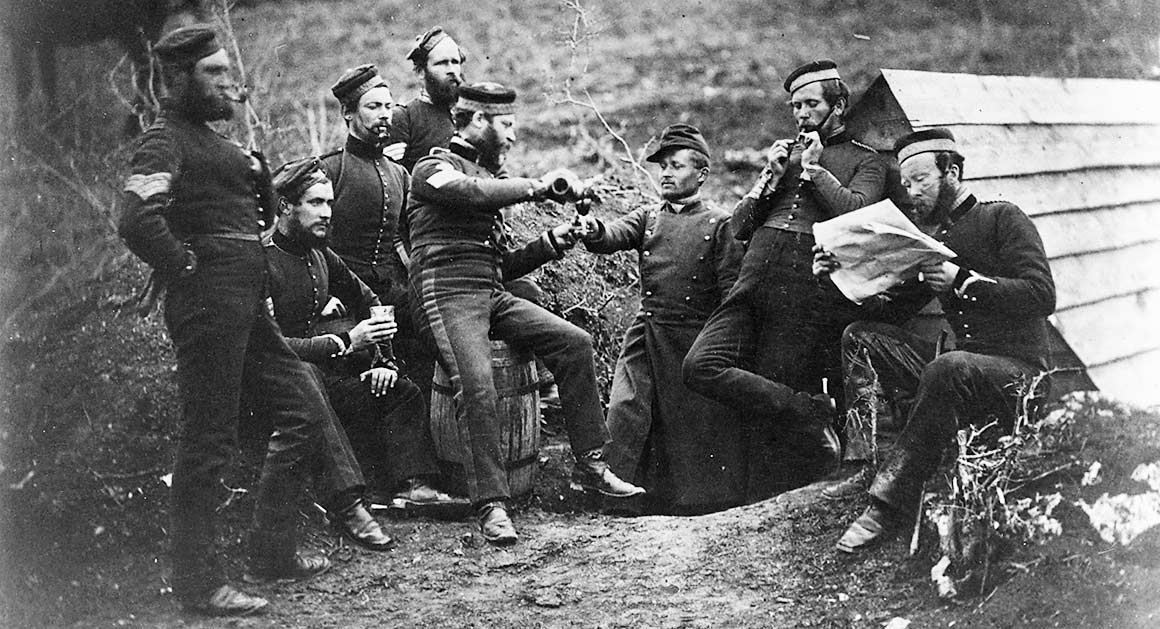 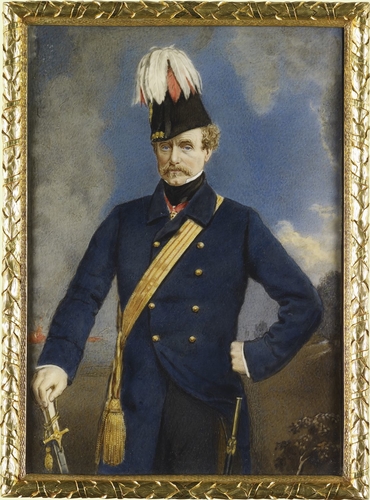 Promoted to major-general in June 1854, it was his service in the Crimean War (1854-56) that brought him to public attention and finally made his reputation.
Campbell commanded the Highland Brigade with notable success at the Battle of the Alma (1854). And at Balaklava (1854), his 'thin red line' of Highlanders repulsed the Russian cavalry assault.
Later in the campaign, Campbell took over command of the 1st Division from the Duke of Cambridge. He also did his best to improve the comfort of his men during the bitter Crimean winter. He was promoted to Knight Grand Cross of the Bath in July 1855.
You must log in or register to reply here.
Share:
Facebook Twitter Reddit Pinterest Tumblr WhatsApp Email Share Link
Top Bottom