The Persian Gulf War, also known as the First Gulf War (2 August 1990 â€“ 28 February 1991) was a United Nations authorized military conflict between Iraq and a coalition force from 34 nations commissioned with expelling Iraqi forces from Kuwait after Iraq's occupation and annexation of Kuwait in August 1990.

Though there were nearly three dozen member states of the coalition, the overwhelming majority of the military forces participating were from the United States, with Saudi Arabia, Egypt and the United Kingdom as leading contributors, in that order, but the majority of the war costs were paid by Saudi Arabia - around 40 billion of the approximately 60 billion in cost.

The invasion of Kuwait by Iraqi troops was met with immediate economic sanctions against Iraq by some members of the UN Security Council, and with immediate preparation for war by the United States of America, the United Kingdom, and Canada.

The expulsion of Iraqi troops from Kuwait began in January 1991 and was a decisive victory for the coalition forces, which took over Kuwait and entered Iraqi turf. Aerial and ground combat was confined to Iraq, Kuwait, and bordering areas of Saudi Arabia. Iraq launched missiles against military targets in Saudi Arabia, and at civilian centers in Israel in an attempt to precipitate retaliation by the Jewish state that would destabilize the coalition by alienating its Arab members.

After Iraq's invasion of Kuwait, U.S. President George H. W. Bush started to deploy U.S. Army, Navy, Marine Corps, Air Force, and Coast Guard units to Saudi Arabia as a part of Operation Desert Shield, while urging other countries to send their own forces to the scene. UN coalition-building efforts were so successful that by the time the fighting (Operation Desert Storm) began on 16 January 1991, twelve countries had sent naval forces, joining the regional states of Saudi Arabia and the Persian Gulf states, as well as the huge array of the U.S. Navy, which deployed six carrier battle groups; eight countries had sent ground forces, joining the regional troops of Bahrain, Kuwait, Oman, Qatar, Saudi Arabia, and the United Arab Emirates, as well as the seventeen heavy and six light brigades of the U.S. Army and nine Marine regiments, with their large support and service forces; and four countries had sent combat aircraft, joining the local air forces of Kuwait, Qatar, and Saudi Arabia, as well as the U.S. Air Force, U.S. Navy, and U.S. Marine aviation, for a grand total of 2,430 fixed-wing aircraft.

Against them, the Iraqis had only a few gunboats and small missile craft to match the coalition's armada; but on the other hand, some 1.2 million ground troops with about 5,800 tanks, 5,100 other armoured vehicles, and 3,850 artillery pieces made for greater strength on the ground. Iraq also had 750 fighters and bombers, 200 other aircraft, and elaborate missile and gun defenses.

Gen. Colin Powell briefs Bush senior on the progress of the war

Excellent quality of your images!

1 March 1991
A long line of vehicles, including an Iraqi russian built tank, standing abandoned by fleeing Iraqi troops on the outskirts of Kuwait City.

Two U.S. Military Police guard their checkpoint along a convoy route in the Saudi desert, Jan. 20, 1991.

These three British soldiers with gas mask in a hotel lobby in Dhahran, Saudi Arabia, feb. 1991. 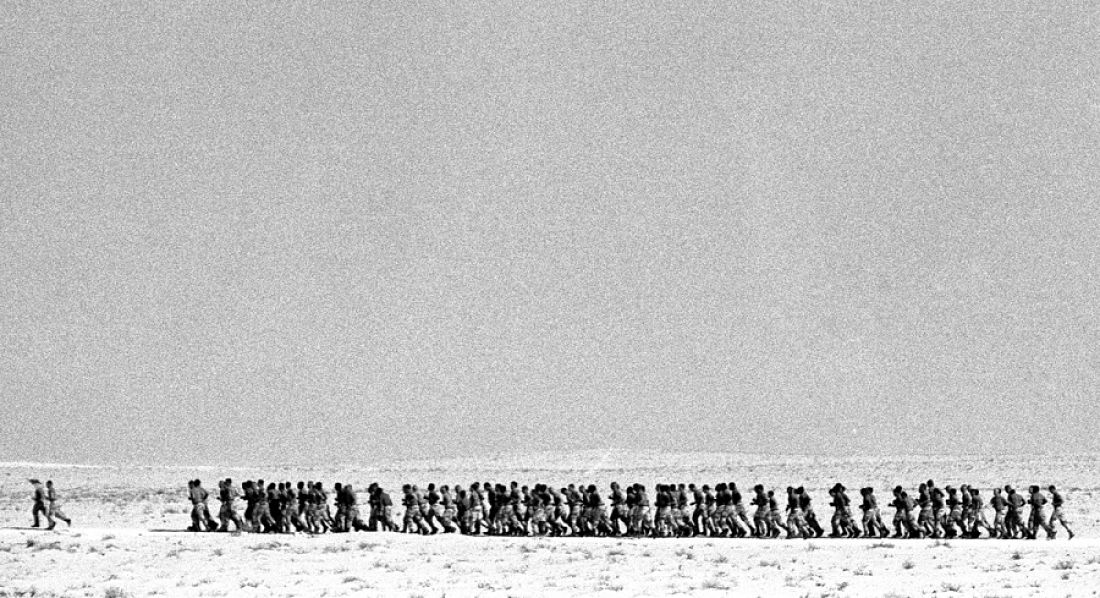