Four military chaplains were on board the World War II military transport ship S.S. Dorchester when it was sunk by a German torpedo on February 3, 1943. As the ship was going down, the men gave their life jackets to young soldiers who had none.-

On February 3, 1943, an Army transport ship called the Dorchester, carrying American soldiers through the icy North Atlantic on their way to serve in World War II, was about 100 miles off the coast of Greenland in rough sea. More than 900 people were on board.-

Many of them were little more than boys -- young soldiers and sailors who had never been so far from home. The journey had been arduous already, with the men crammed into claustrophobic, all-but-airless sleeping quarters below deck, constantly ill from the violent lurching of the ship.-

In the blackness of night, a German submarine fired torpedoes at the Dorchester.
One of the torpedoes hit the middle of the ship. There was pandemonium on board. The Dorchester swiftly began to sink.-

The soldiers and sailors, many of them wakened from sleep by the attack, searched desperately in the dark for life jackets and lifeboats and a route to safety.-

Quickly and quietly the four chaplains worked to bring calm to the men. As soldiers began to find their way to the deck of the ship, many were still in their underwear, where they were confronted by the cold winds blowing down from the arctic.-

Once topside, the chaplains opened a storage locker and began distributing life jackets. It was then that Engineer Grady Clark witnessed an astonishing sight. When there were no more lifejackets in the storage room, the chaplains simultaneously removed theirs and gave them to four frightened young men. When giving their life jackets, Rabbi Goode did not call out for a Jew; Father Washington did not call out for a Catholic; nor did Fox or Poling call out for a Protestant. They simply gave their life jackets to the next man in line. One survivor would later call it "It was the finest thing I have seen or hope to see this side of heaven."

As the ship went down, survivors in nearby rafts could see the four chaplains -- arms linked and braced against the slanting deck. Their voices could also be heard offering prayers and singing hymns.

Although the Distinguished Service Cross and Purple Heart were later awarded posthumously Congress wished to confer the Medal of Honor but was blocked by the stringent requirements which required heroism performed under fire. So a posthumous Special Medal for Heroism, The Four Chaplains' Medal, was authorized by Congress and awarded by the President on January 18, 1961.-

This advertisement appeared in newspapers on 28 May 1948, the day the U.S. Postal Service issued a commemorative stamp honoring the men, who became known as the Four Chaplains.-

On february 3, 2013 a bronze monument was unveiled for the first time amongst a large crowd at the Church of Saint Stephen in Kearny, New Jersey. This was the same church that Father Washington had been a curate in just before the war. Its a beautiful 11 foot bronze statue depicting the Four Chaplains holding hands in the bow of the ship.-

Great men and if all religious people or even all people would be that way, then I think, we had no wars anymore.

Every year, a service held in Coventry (Rhode Island) pays homage to the heroism of four chaplains.
On this March 2021 the service featured a rifle salute and posting of the colors, by the Rhode Island Marine Corps League Color Guard, and of the service colors, by American Legion SPRM Post 81. A brief biography of each chaplain was read aloud, and candles were placed before their framed photos. As each bio was read, American Legion SPRM Post 81 Commander Corey Bates rang a bell.
Finally, four wreaths were placed on the WWII monument, one for each chaplain. 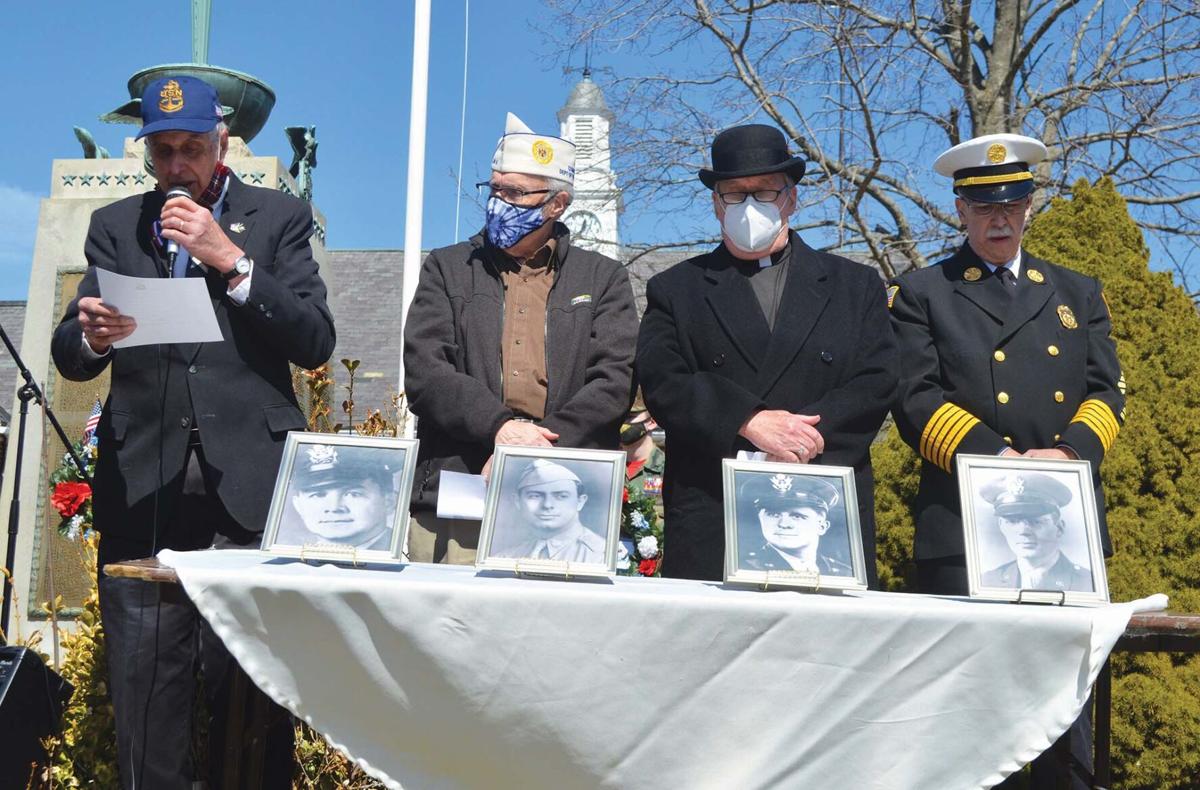