The Quick & The Dead, Brawl 5 - on hold for indefinite period.

The next installment of The Quick & The Dead tourneys is now open for recruitment. 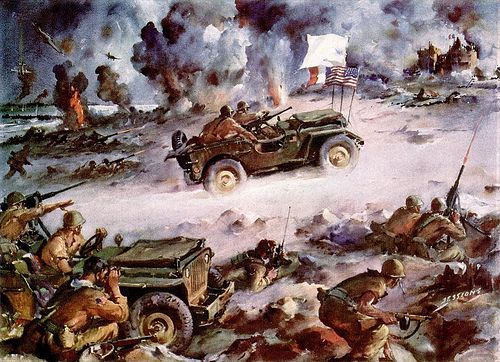 It's the usual format of small, quick, fast and furious all-vehicle Blue vs Blue battles -- this time we head back to good old CMBN (CW & MG included) for a "Featherweight Division" competition -- it's going to be all light vehicles, armoured cars, halftracks and even some AA vehicles and possibly light tanks. (following tourneys will be middle- and heavyweight divisions)

8 players minimum roster -- but if there is interest, I am willing to expand to 10 or 12 players. Reigning Q&D champ @MeatEtr is sitting this one out, so the dedending champion slot is also open.

Randomly drawn opponents played in three rounds (you may face the same opponent more than once -- this is brawl after all) -- highest two scorers play in the FINAL.
If two or more players end at the top spot after the THREE rounds with equal points, I see if they fought each other and the winner of that battle goes through to final. If they haven't played each other, then we count how many vehicles each player has destroyed over the 3 battles, the one with the higher kill ratio goes through.

In case of Draws, casualties inflicted are counted: 20 points per vehicle, 1 point per man KIA, WIA or POW.

We also only had one sign up from Patreon supporters -- so there are a minimum of 7 slots open -- post applications in the thread below.

Heads Up please put me in ...Thank's Mate

Excellent -- so we need one more for our minimum eight gunslingers.

I'll keep this open for another day or two -- if we don't get an eight player, I'll sign myself up as Pvt Cannon Fodder 1st Class and join in the fun.

I'm going to have to put this on hold for an indefinite time -- RL family stuff just got serious with my mom's deteriorating health situation -- will advise when back on track.

Rico said:
I'm going to have to put this on hold for an indefinite time -- RL family stuff just got serious with my mom's deteriorating health situation -- will advise when back on track.

OK Rico thanks for the heads up.....hope you get sorted and back on course soon mate

Thanks, but not likely ... it's unfortunately cancer and this has been months in coming and we've been all prepared for it (her as well) -- things just took turn a little suddenly, but timing still rather uncertain.
Last edited: May 17, 2018

Bugger, sorry to hear that.

Hate to hear of this Rico! Thoughts and prayers to you and your family.

All the best to you @Rico and we will be here when you get back. Or before then if you need anything.