To Al-Hell and back - project (CMSF2)

I'm working on a project which i call "To Al-Hell and back", it will be a 4 or 5 missions campaign Red vs Red.

Please find here the "background"(small and may change) of the campaign :

To Al-Hell and back, operation ORPHEUS
Click to expand...

In the Latakia Governorate a local uprising, mainly lead by a formation named Luwa El-Mumtaz(LEM), was causing turmoil in the governorate since month. The local force was not able to keep it in check, large part of it defected or deserted and the LEM became a real threat to national integrity.
Click to expand...

The 30th Guard Division, which your battalion is a part of, was send to help the locals forces suppress the rebellion.
Click to expand...

The 8th of may the division was engage in heavy combat in the north when the general Harith Abdullahi Farouq, commanding officer of the 30th Guard Divison, received a phone call from the president chief of staff himself. He was to immediately assemble a task force and send it to Al-Hell on the coast and retrieve a VIP from the government, code name EURYDICE.
Click to expand...

According to intel, the LEM planned a large assault on Al-Hell in order to capture or kill EURYDICE.
Click to expand...

Your battalion, the third, was the only one available for this mission, you are in charge of breaking through enemy line, extract EURYDICE and bring it back into safe territory further south. The operation received the code name ORPHEUS.
Click to expand...

You will command a three mechanized guard company, half support company, small recon unit, mortar and all the supply you can bring. Munition should not be a problem, but the further you will go the more difficult it will be to replace casualties.
Click to expand...

I'm currently starting building the map of the second mission and the first mission is finish(for the moment, I just create scenario, later i will compile them in a true campaign).

So first, my first scenario is ready(almost, i need pics for the briefing but i have no idea what to put..yet) and i would like to share it with you.

If you want to keep the surprise of the scenario for the, hypothetical and far away, release of the campaign please do not play it. If you want to play it and give me a feedback it will be highly appreciate.

On the scenario : It's an red vs red attack(you are the attacker),. You command a mechanized guard company against unconventional troops. I made 4 different IA plan for this one.

In term of creation, I have one question : Can you confirm me that in a campaign I can’t used the same map without the magical repair of all building and ground ? (I cannot do a capture scenario then a hold scenario on the same map realistically)

Second question : Where can I put my mission file to share it with you ?

Thank you for your time,

The map of the second mission is on progress. It's progressing well.
I would really appreciate a beta tester for the first scenario (to have an idea if it's too difficult or not)

Just saw this one, seems interesting! I don't have so much time but I would like to help playtest, although perhaps others will have more time and can provide feedback sooner. Although I have never made a scenario / campaign, I think persistent battle damage is indeed not possible.

Perhaps you should post also in the Modern forum to get more attention for this .

I didn't want to put it in the wrong topic Hoppefully more people will pass by with the time.

So, LEthaface will test my first scenario(my many thanks). Today i almost finished the second. I should be able to start the third this week almost half "done"

Map 3(Al Hell it self) : In construction. I made a coastal city map, it feature governor palace, two archaeological sites, hotels, tourist area, a square, a mosque, a mausoleum and some inland heavy forested territory(it maybe too large, i may need to reduce it, will see).

When all the maps will be ready, I will release them independently from the scenarii/campaign(To be used as anyone see fit).
No screenshot cause my computer is not powerful and i’m not happy with how they look :s

Hey @Bartimeus . Did you need a tester for map/mission 1 or 2? I have some time free now. I only have SF base game though...

Hey Gnarly !
Witj pleasure. I propose you to test the second map. I contact you by private message.
I have basic and marines module but i didn't use any marines so it should be fine 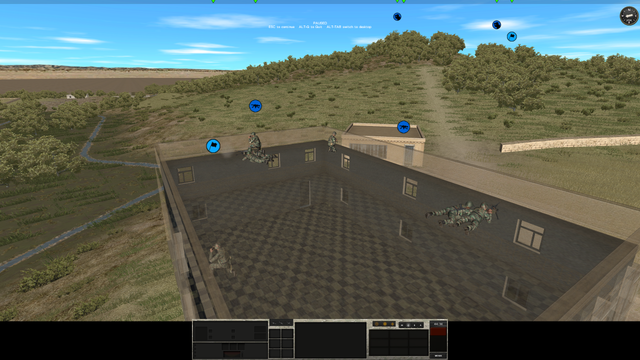 Screenshot from Lethaface(He is testing my first mission).

The third map, the one of AL-He'll itself is over!!! Now I have to do all the scenario.
I'm not 100% happy with the map but I'm not a map-artist and you have to be realistic about those things.
Soon(or later) I will need tester for the one too

Making IA plan for large map is harder(when the IA side is on the defensive) than for little map. But it's progressing. We are in lock-down in France so i will have time to work on this

Hope you are all fine.
I made 5 different IA plan for the third map. Now i need to adjust those plan if needed, wrote a briefing and set-up objectif
Lethaface is trying the first scenario(the second version of it)
Gnarly tested the second scenario, unfortunately he cannot continue so I'm looking for a volunteer to test the second version of it.
I will need, soon, a tester for the 3third scenario, be careful, it's a big one

While I'm having a hard time to continue my second playthrough due to RL things, I can already share that @Bartimeus managed to create some very competent AI plans for the scenario I played. When I started it I thought to play a 'casual' battle against the AI in RT, without too much planning. Well, the AI really did a number on me so that I decided to restart the battle and play it in WEGO.

So if people want a challenge against the AI, try these out!

I've started up my WeGo save. Some screens without icons so minimal spoilers, hope @Bartimeus doesn't mind! ;-)

Thanks letha for your feedback and screenshots. I will use one of them for the briefing of this scenario.

Progression is slow but it continu

Hello all, a little update on the progress

Scenario 1 : done
Scenario 2 done
Scenario 3 done(not tested yet)
Scenario 4 : 80%(2 IA plan done and need testing, I force my self to produce at lest 4 different IA plan per scenario)
Scenario 5(hypotical) : 0% Not sure the player will have enough soldier alive to go through a 5th scenario but who knows?


So with the help of Lethaface we are making good progress. Scenario 4 need some testing(as well as a briefing) and the map for scenario 5 is done!
So after finishing scenario 5 I will polish the all things(put some pics in the briefing, no mini map cause I do not know how to do it nicely, I'm like libel 1 on paint so... XD) then I will do the script and then public release for the v1.


So with the help of Lethaface we are making good progress. Scenario 4 need some testing(as well as a briefing) and the map for scenario 5 is done!
So after finishing scenario 5 I will polish the all things(put some pics in the briefing, no mini map cause I do not know how to do it nicely, I'm like libel 1 on paint so... XD) then I will do the script and then public release for the v1.
Click to expand...

If you need someone to play test scenario 4 or 5 let me know. Really interested in this campaign.

Scenario 4 lethaface is already on his way to test it, so can I propose you scenario 5 ? In this scenario you have two compani and support, good for you ?