To The Gates of Stalingrad - David Glantz 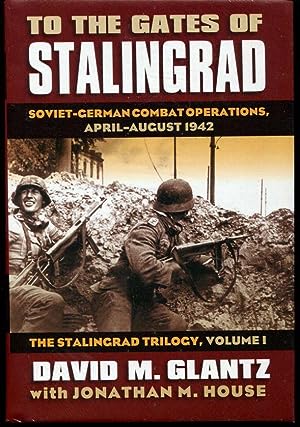 Trust a historian to not know how to count. The first of four books in a "Stalingrad Trilogy". At the end of last year I tracked down and purchased Glantz and House's Stalingrad tomes. Then COVID-19 hit leading to 2020 for me being a blur of reactionary work and many late nights. I was never in a lockdown this past year, but having these books on hand would of been great. As a result, on and off it's taken a full year to get through the first volume. It's certainly more targetted for an academic rather than casual historian audience but provides superb detail on the operational complexities for both sides in mid-1942. A German army that is already in parts a shell of it's 1941 self, while the Soviets raise 55 new armies (of varying quality and kit) in the space of 6 months. A prequel where you already know the outcome but the story on how they got there is more complex than you ever realised.

Perhaps what is the most surprising is that the first book not only looks at the start of the planning for Operation Blau, but also the situation leading up to the commencement of planning. Kharkov, Crimea both receive dedicated chapters before the road to Stalngrad actually commences, while the siutation in the Caucuses and then the Rzhev Salient also receive attention towards the end of the book. By the time that Operation Blau commences you're already a good 200 pages into the book. And then there's Blau I, II and III as Paulus struggles in a stop start fashion to actually get to the city. Over the course of the book, Glantz dispels a number of traditional myths that the German forces entering the city in September were slowly bled white solely due to the city fighting, instead pointing out the horrendous losses they suffered fighting across every river system on the approach to the city was just as important in sealing their fate a few months later. Meanwhile he expertly demonstrates a Russian Army that is slowly and painfully learning how to fight a 20th Century mechanised war.

Pros
- Great detail from both sides of the conflict. (Glantz as I understand was one of the first western historians to pour through the old Soviet WW2 records in the 1990's and 2000's).
- The politics and thinking of high command on both sides is particularly well explained.
- Updates throughout the book on changes to OOB and relative strength of units is great and must of been a mammoth undertaking to track.

Cons
- The maps provided are painful to read to help get your bearings and visually understand the movement of units he talks about in detail. The 'Osprey Treatment' for clean modern coloured maps would of helped readers immensely.
- Rarely drops to the battalion level to explain tactical level combat which may upset some.

Recommended. I've heard there is meant to be a condensed single volume combining all four books of this series into one but avoid that version if you want detail/full experience. Now for book 2.

I have the first two books but have barely dented the first.
Stalingrad, the battle perked my interest as a teen....I have quite a few books on the
battle, this "trilogy is not for the faint of heart"

Any book Glantz has a hand in is worth the time. I will have to add this 4 book trilogy to the stack of 200+ books I have to read.

I have all four, read the first, bogged down midway through the second, the fourth is still in its original wrapping. I will eventually get through them, although it may take a CM stalingrad game to motivate me.

Glantz is not a very entertaining writer. That said, I did like the first book, probably because the Germans are on the offense and it is interesting reading about the various operational considerations of the commanders.

Sgt Joch said:
Glantz is not a very entertaining writer.
Click to expand...