Gentlemen Turn 3 has arrived, well just about.
There is a small matter of a Koronov explotiation from the town of Nowa. As all the defending units have taken a step loss, the Koronovian forces have a choice to do this with Mech forces there. Although this will put them at risk of been cut from supply.
Speaking of which, several Koronovian forces have been cut off from supply now, which will mean a low ammo supply in CM battles.
I have now updated the OOB for both sides which can be found in their respected HQ Drop Box.
Has you guys can see in the image below, there has been some heavy fighting last turn especially along the Kolonia highway and several units have taken a step loss.
I rolled the initiative and Koronov go first.
The latest Vassal file is also in the HQ Drop Boxes.

Just a note on casualties, in some cases I have survivors from one platoon/squad into another platoon/squad to keep head counts above the 50% threshold for at least one platoon in a company. 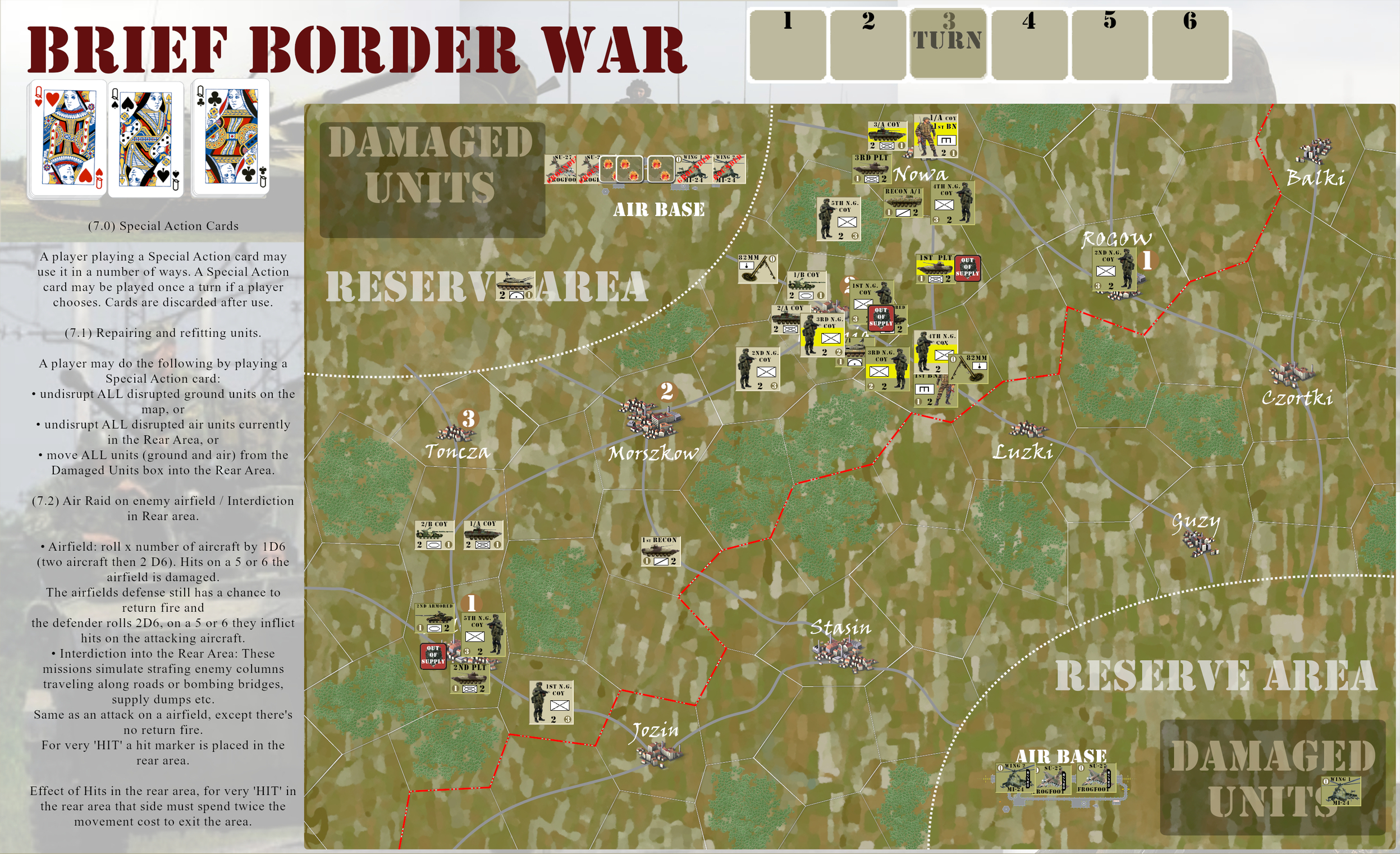 I will need some time to think about the implications, but this weekend might be difficult as bars & restaurants open so I'm looking to make up for some lost events in the weekend (and probably good hangovers hehe).


One question: shuoldn't the NG Companys of Korinos near Kolonia and Jozin also be out of supply?

No, they're in their home terrain.

I understand about catching life by the tail. Where I am it's another month away.
So do you think you can have a plan on Wednesday.

Nathangun said:
No, they're in their home terrain.
Click to expand...


Nathangun said:
I understand about catching life by the tail. Where I am it's another month away.
So do you think you can have a plan on Wednesday.
Click to expand...

Wish you a good 'life catch' in a month! Tbh the last straws of the lock down, all combined, was a bit too much over the last months. I barely played CM. Although I had some fun playing mordhau with my brother, it's a no brains required but still somewhat realistic hack and slash. Anyway, let's assume I'll have plans ready Wednesday. If I can't find the capability I'll inform early next week, but for now I assume things will be fine.

@Nathangun @nektoman ,
I did some thinking about the turn, so plan is about ready but it was/is difficult to stay inside at home with 25+ C, sun and everybody waking up from their caves (including me).
But this evening before or after football training I hope to sit down, or tomorrow morning.

Thanks @Lethaface for letting us know, apricate it.


Gentlemen, @Lethaface was unable to get on his PC but told me what he wanted done so with any further delay here are the moves and attacks.

Air Strikes against Korinos Air bases. Cost one Special Action card.
Koronov's fail to score any hits this time and the Korinos defenses failed to get any hits as well.


One Special Action Card was played to remove units out of the Damaged Box into reserve area/Air base.
Another Special action Card was spent on repairing all ground units on the map.

From the rules:
(7.1) Repairing and refitting units.

A player may do the following by playing a Special Action card:
• repair ALL ground units on the map, or
• repair ALL disrupted air units currently in the Rear Area, or
• move ALL units (ground and air) from the Damaged Units box into the Rear Area. 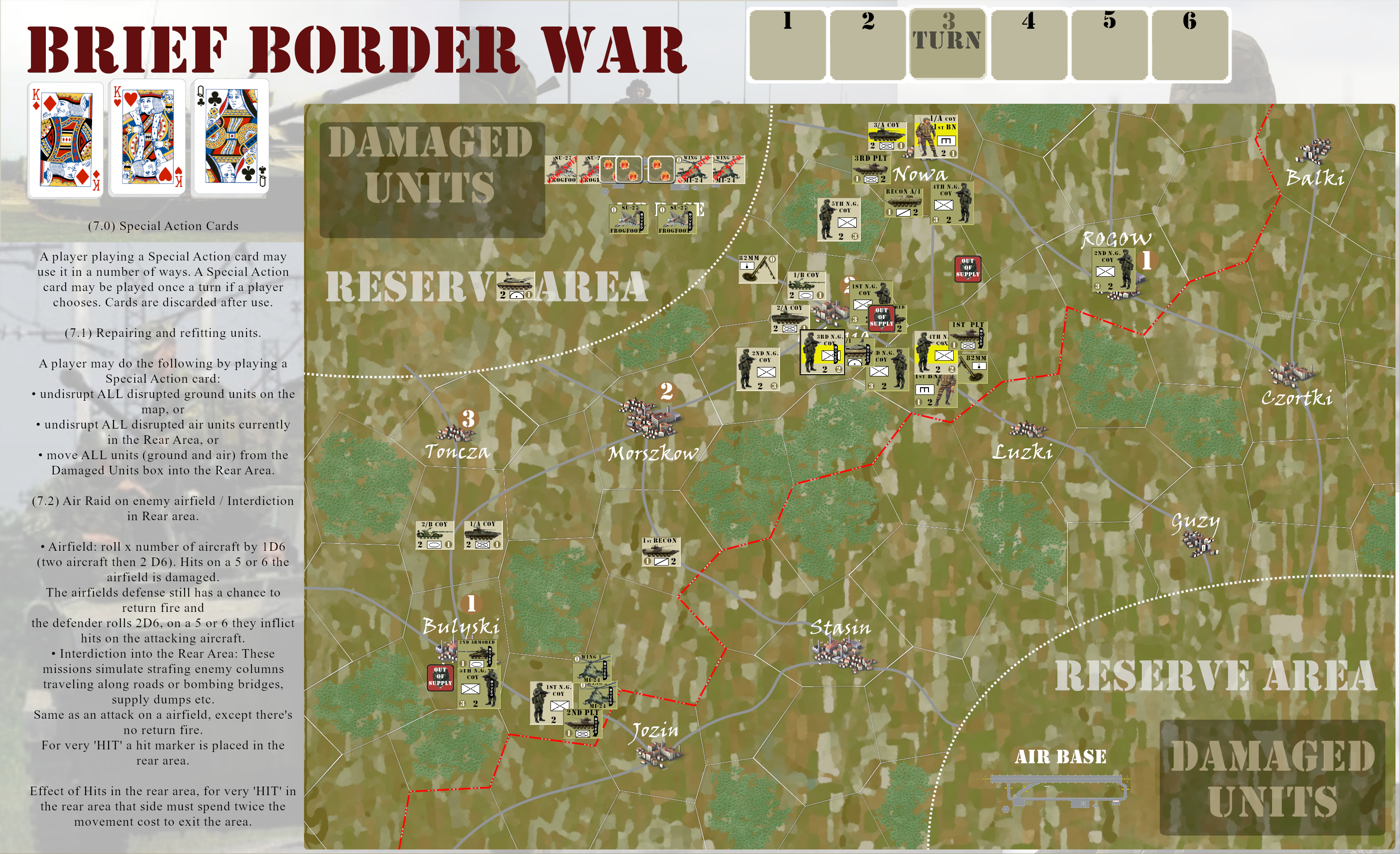 I'm up for a battle this round Sir! o7

We have to wait on @nektoman to issue his team's orders.

Thank you guys for moving on. I had very RL eventful week-end (in a good way) and still can't cool down. Tomorrow I'll try to consider current situation and present my own offers.

Gentlemen I got the Korinos orders in (on Saturday).
There will be five battles this turn.

Battle 1 - Korinos forces attack into Bulyski in an attempt to recapture the town. CM battle ready to go.

Battle 5 - Koronov forces attempt to finish the job in Nowa, the Korinos garrison is reinforced. CM battle ready to go. 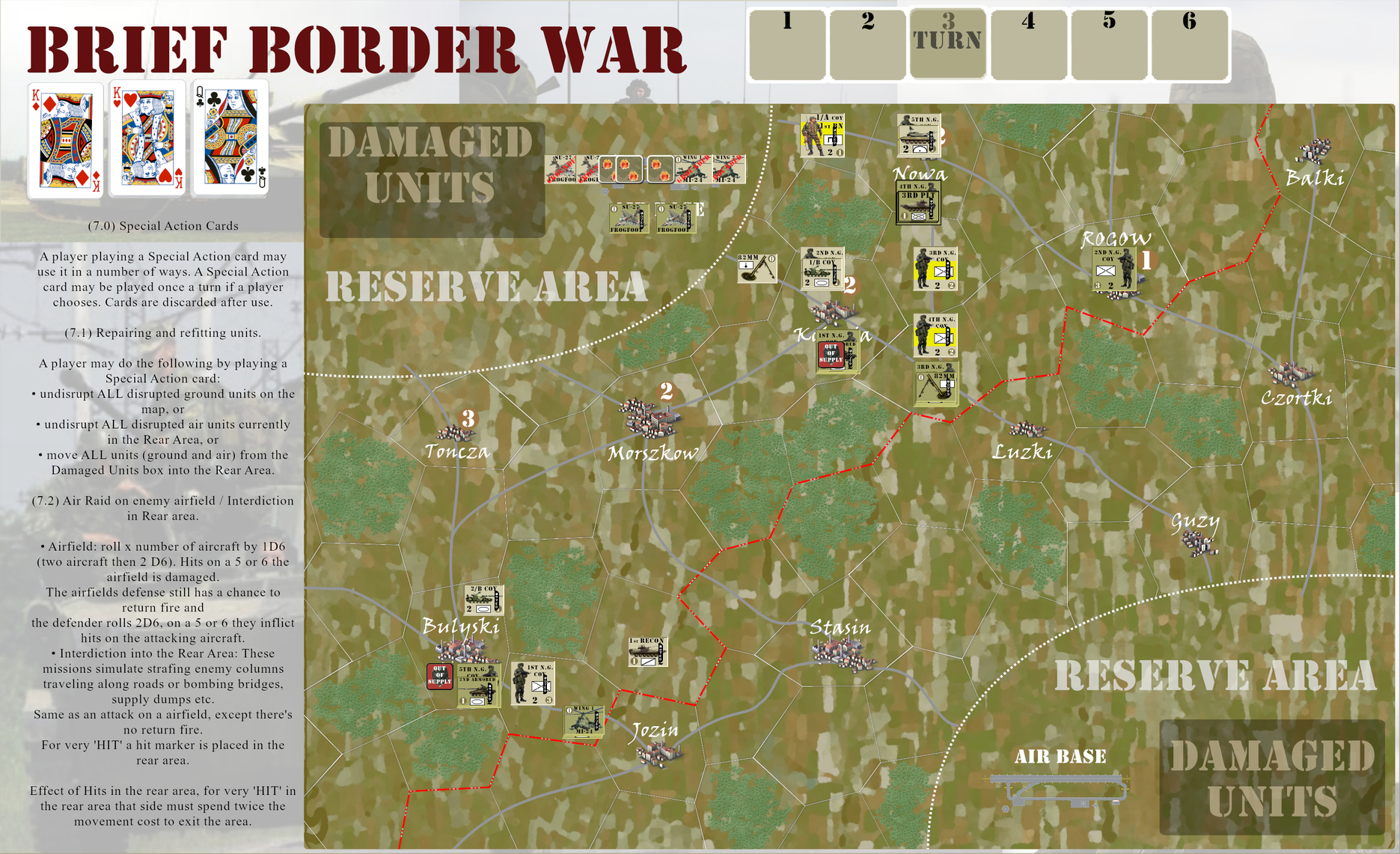 I'm alive and excited to play.

Hello? 'tap-tap' is this thing working?
Click to expand...

I managed to slip out the pub (guilty emoji goes here). I'll rustle the commanders from their vodka cellars! ;-)

@Probus I'm waiting you at the command position.