The first American submarine is as old as the United States itself. David Bushnell (1742-1824), a Yale graduate, designed and built a submarine torpedo boat in 1776. The one-man vessel submerged by admitting water into the hull and surfaced by pumping it out with a hand pump. Powered by a pedal-operated propeller and armed with a keg of powder, the egg-shaped Turtle gave Revolutionary Americans high hopes for a secret weapon - a weapon that could destroy the British warships anchored in New York Harbor. 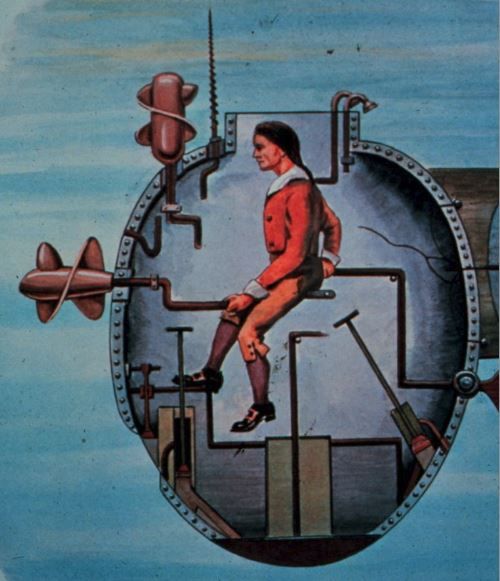 The Turtle's torpedo, a keg of powder, was to be attached to an enemy ship's hull and detonated by a time fuse. On the night of September 7, 1776, the Turtle, operated by an Army volunteer, Sergeant Ezra Lee, conducted an attack on the British ship HMS Eagle. However, the boring device that was operated from inside the oak-planked Turtle failed to penetrate the target vessel's hull.

It is likely that the wooden hull was too hard to penetrate, the boring device hit a bolt or iron brace, or the operator was too exhausted to screw in the weapon. When Sergeant Lee attempted to shift the Turtle to another position beneath the hull, he lost contact with the target vessel and ultimately was forced to abandon the torpedo. Although the torpedo was never attached to the target, the clockwork timer detonated it about an hour after it was released.

The result was a spectacular explosion that ultimately forced the British to increase their vigilance and to move their ship's anchorage further out in the harbor. Royal Navy logs and reports from this period make no mention of this incident, and it is possible that the Turtle's attack may be more submarine legend than historical event.
Last edited: Sep 10, 2017