The V-3 Hochdruckpumpe was a supergun designed by Saar Roechling during WW2. The 140 m long cannon was capable of delivering a 140 kg shell over a 165 km range. Construction began of a bunker for the cannons in September 1943 at Mimoyecques, France. The site was damaged by Allied bombing before it could be put into operation and was finally occupied by the British at the end of August 1944. Two short-length (45 m long) V-3's were built at Antwerp and Luxembourg in support of the Ardennes offensive in Dec 1944. These were found to be unreliable and only a few shots were fired without known effect.

The V-3 used Baron von Pirquet's concept of sequentially electrically activated angled side chambers to provide additional acceleration of the shell during its passage up the barrel of the gun. This allowed a muzzle velocity of over 1500 m/s. The projectiles of the smooth bore weapon used fins for stability, as would be the case with the Canadian Martlet series 25 years later. 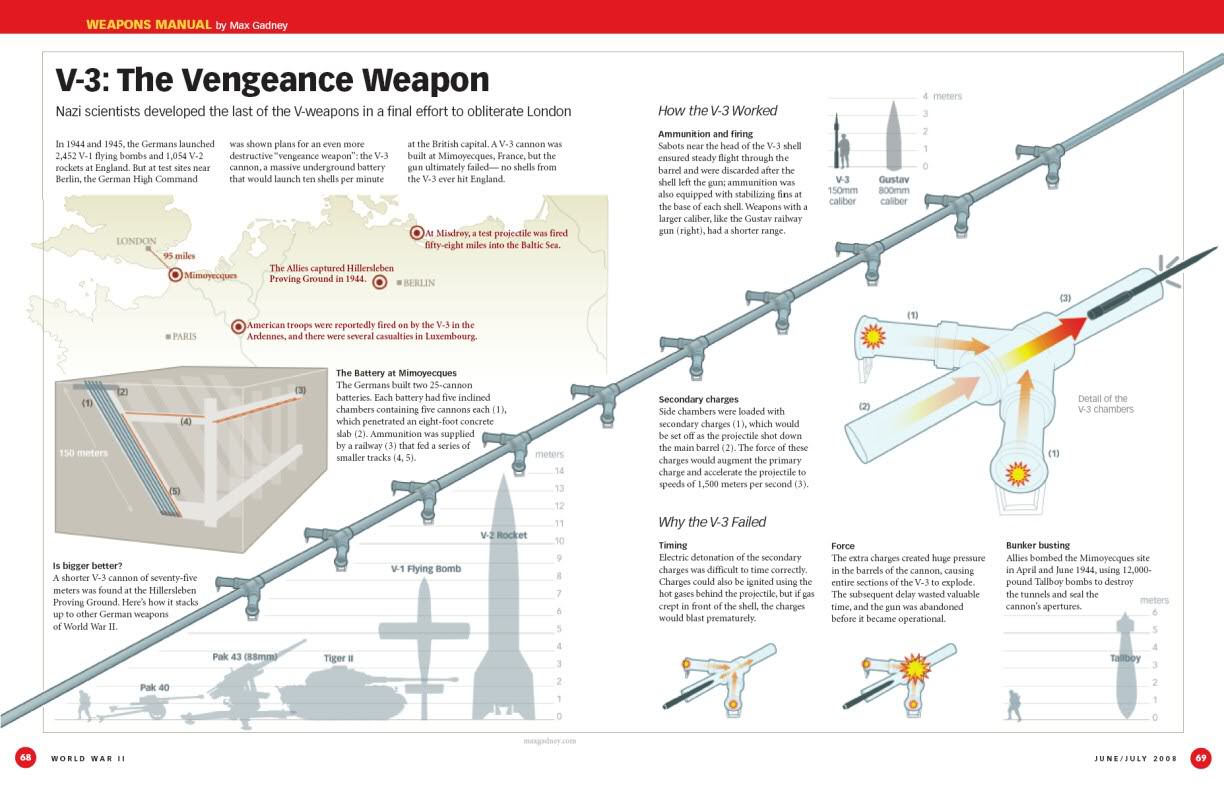 Lyman and Haskell of the US Army had built an unsuccessful prototype of the concept in the 1880's. It was found that the expanding gases of the base charge moved well ahead of the shell and ignited the auxiliary charges before the shell passed them, actually slowing the shell down. But in 1941 an engineer Conders at Saar Roechling proposed the use of electrically-activated charges to eliminate the problem. A 20mm prototype was built at a test site at Misdroy (Miedzyzdroje), Poland and successfully demonstrated in April-May 1943. Hitler was persuaded that this could be a third terror weapon to supplement the V-1 and V-2. Overruling the German military, he ordered fifty of the guns to be built in concrete bunkers in France in order to bombard London. The first installation of five guns was to be built 165 km from London at Mimoyecques, near Calais, under Operation Wiese. The superguns were built at a fixed angle into a 30 m chalk hill, covered by a 5.2 m thick protective concrete dome. Each 140 m long cannon was capable of delivering a 150 mm / 140 kg shell on London.


The angled lateral combustion chambers were spaced every 3.65 m along the bore. The modular weapon could have the lateral chamber sections replaced as they wore out (they would burst after only a few firings).

Hundreds of slave workers began construction in Sep 1943 by sinking an initial tunnel 30 m below the hill's surface into the chalk. French Resistance informed the Allies of the new effort almost immediately. Bombing raids to destroy the site began two months later. However the bunker proved impervious to Allied bombs, even 5400 kg Tallboy penetrator weapons. The weapons were nearing completion when, on 6 July 1944, three Tallboys happened to make it though the gun shaft openings. They penetrated 30 m to the first level of the complex and exploded, killing dozens of workers. Work on the complex stopped at this point.

The Allies were unaware of this success and searched for new methods to destroy Mimoyecques and other German bunker sites. Under Project Aphrodite (USAAF) and Operation Anvil (USN) radio-controlled, television-guided B-17 or PB4Y (B-24) bombers crammed with ten metric tons of explosives were to be flown by a crew near to the target. The pilot and co-pilot would then bail out while an accompanying aircraft guided the missile to a precision strike. This approach was abandoned in Aug 1944 after a total lack of success and several crew fatalities (including Joseph P Kennedy, Jr, elder brother of the future president). 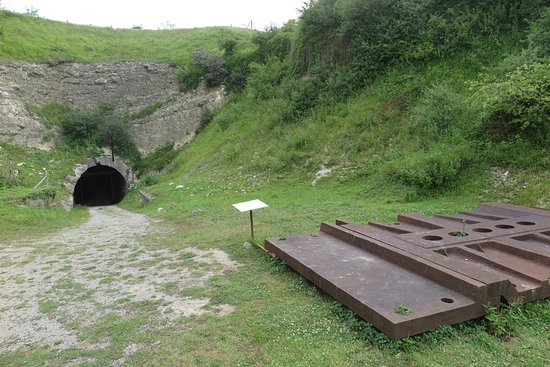 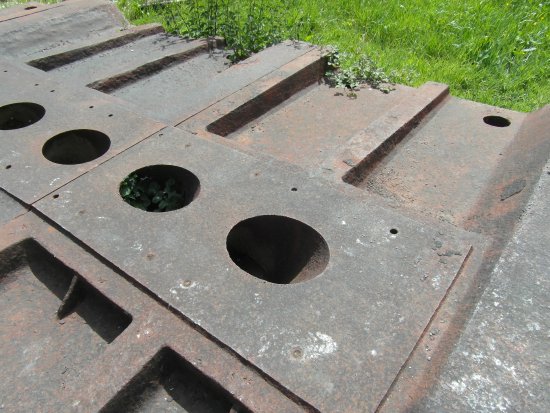