Decided to play the Vikings in Campaign I. Great fun playing the Vikings. Aaarrgh! Kill, stomp, kill!
After that, not so much. Think of the Viking OOB as the Romans without any imagination or maneuver capability.
The OOB is all hvy infantry with a scattering of cavalry. The all around troop quality is usually quite good with the Beserker units damned near invincible, However, there is nearly no sign of light units of any kind. Vikings apparently saw little use for girly-boy javelin tossers or a bunch of rock-lobbers. That is/can be a problem as my Vikings are almost always outnumbered by the enemy, their MBL over lapping both my flanks. Because Vikings rely on quality rather than quantity I rarely have enough units to protect both flanks, let alone round up enough non-front line troops for reserves or flankers of my own. This means most battles consist of a frontal assault while looking for a line weakness. Or running like hell for some favorable terrain to form a defense wherein the enemy may bash themselves senseless, eventually leading to a chance for a counter attack. Running like hell is frequently problematic since hvy infantry are not known for their gazelle like qualities.
On to battle #5. Won the first two convincingly. Next two were really draws, but night came along to end the battle and I was declared the winner, the enemy leaving me the battlefield. If I win this battle I truly will be surprised as this is the most I've been outnumbered. (sigh).
So, Viking Campaign #1 is great fun and a challenge. Think you'll like it. Already got my $15 worth! Aaarrgh! 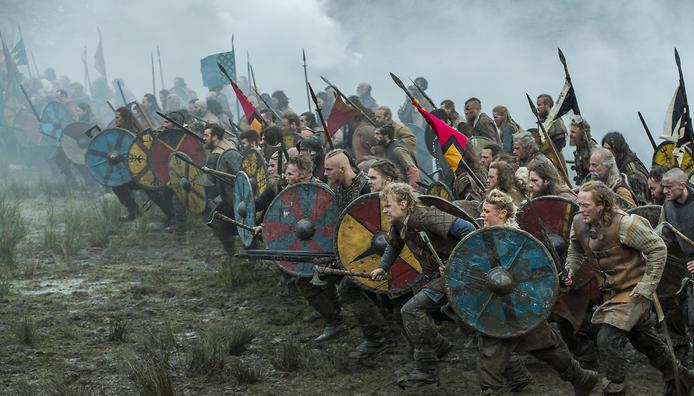