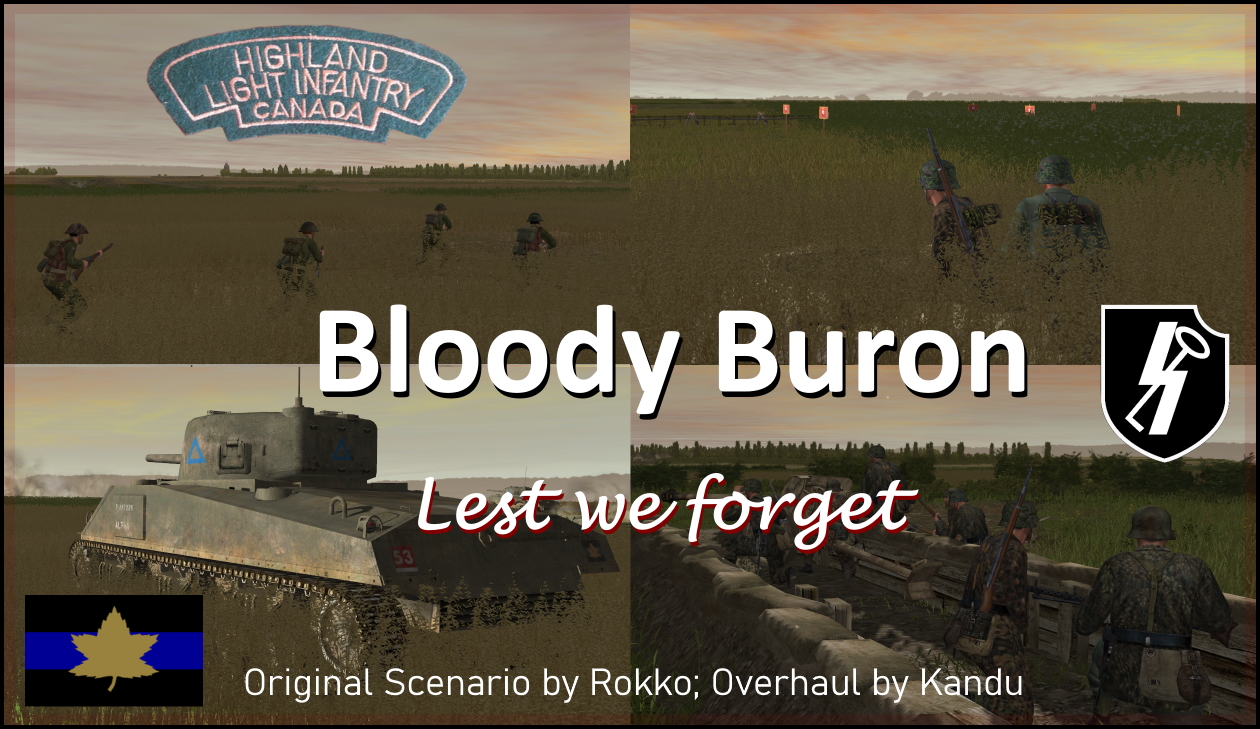 For those who enjoy Battalion level historical engagements.

Play single player as Canadians vs A.I. German SS only.

! WARNING – Slow Loading & Long Play Time! This is a moderately large scenario with a lot of detail and a very heavy artillery barrage in progress. Please be patient.

Background: While creating my own 3km x 3km map of Buron and its environs, I could not help admiring Rokko’s map for his “Bloody Buron” scenario and how he made his map fit the diagonal/orthogonal constraints of CMBN’s Scenario Editor. I started tinkering with the anti-tank ditches to make them accessible to infantry as was the case historically, but one thing led to another and while my own map lingered in the wings, Rokko’s work gradually received a total overhaul. This is the result. My re-interpretation does not mean that Rokko’s work was inadequate in any way, not at all. It simply means that I have interpreted the sources and imagined the setting differently.

The Package: The BloodyBuronScen.zip includes special play instructions which should be followed carefully to get the full historical experience as well as extensive Designer’s Notes which includes a list of one compulsory and a number of recommended mods to make this scenario shine. Some of the mods are included in the BBuronMods…..zip below but others such as the my additional Normandy buildings and Jacquinot’s SS uniforms will have to be downloaded from either https://cmmodsiii.greenasjade.net/ or https://www.thefewgoodmen.com/cm-mod-warehouse/.

CMBN Version: This scenario was reworked in CMBN v.4.03 with CW, MG, Special Vehicles and Great Swan expansions installed. If your scenario does not load at all then one of the foregoing is missing. For example special vehicles British Crocodile and Crab are needed to play. Please be patient with the initial loading so you do not confuse a very slow load with not loading at all.

Lest We Forget: As a Canadian living in London, Ontario, just an hour’s drive from where the Highland Light Infantry of Canada was recruited (Waterloo, Ontario) and as a Nederlander by birth whose Amsterdammer family was rescued from starvation and occupation by the sacrifice of so many Canadian men and women, this was a labour of ‘grateful remembrance’.

What You Need to Play: You must download and install at least the first four files listed below as 1.BBuron-Scen, Save1, Save2 and Rubble. The others that follow are optional graphics mods either created by other authors and further modified by me or created by me or just included here. The original authors and creators are all acknowledged in the documentation included with the package.

Feedback would be much appreciated.