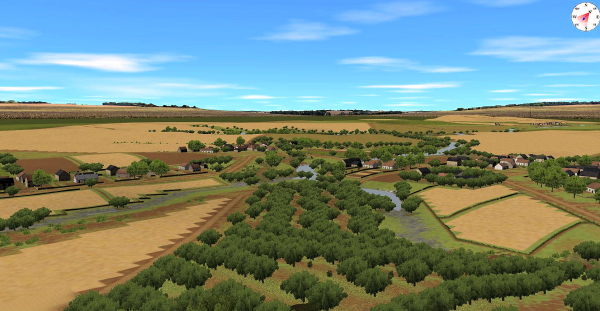 This CMBN scenario, ‘Firebrigade’, recreates a fictional large scale armoured meeting engagement (about a reduced battalion on each side i,e, several companies) on the Eastern Front in late July 1944. In this scenario US forces represent a Soviet armoured forward detachment that has been pushed through a breach in the German front line (HKL).

In reality Soviet infantry would ride the tanks rather than be carried forward in half tracks. At the moment in CMBN infantry are unable to mount up and ride on armour (as in reality in the early stages of Normandy, which the game truly represents this behaviour was not common when in contact or expected to be in contact with the enemy) hence the half tracks.

Unit Size: Approx several tank companies each side plus several companies of half track borne infantry (all reduced numbers due to combat losses etc).

Scenario Loading time: As it’s a large map it’ll take around 5 to 10 minutes to load. Be patient!

Play as: Best played as H2H; There are two AI Plans for either side so you can play Red Vs Blue AI or vice versa.

Yesterday morning a surprise Soviet attack broke through the German HKL. Through this breach the Soviets pushed a strong armoured spearhead east along the rollbahn (the main German supply route) towards the village of ORLOVKA, cutting the German supply route and threatening to encircle the remaining defenders on the HKL.

Late yesterday afternoon a small German kampfgruppe of assault guns and some infantry, hastily moved into a blocking position west of ORLOVKA in the vicinity of BRIDGE 2. They engaged the advancing Soviet armour and knocked out the lead Soviet tank of this spearhead, but were then forced to pull back due to superior enemy forces. Since that engagement the Soviet advance guard took up defensive positions in and around some sections of the village of ORLOVKA.

That night both sides plan and issue orders for the next day. Both sides are desperate to change the current situation: The Soviets to hold on and expand their gains for future operations; The Germans to destroy the enemy in this sector and seal the breach.

It’s now 0500 Hrs on the 31st July. The day promises clear weather. Both sides start up the engines of their armour, last minute orders are issued, as the tanks and half tracks prepare to move out to their departure points.

I’d appreciate any feedback so you can email megeorgemc@blowtorchscenarios.com