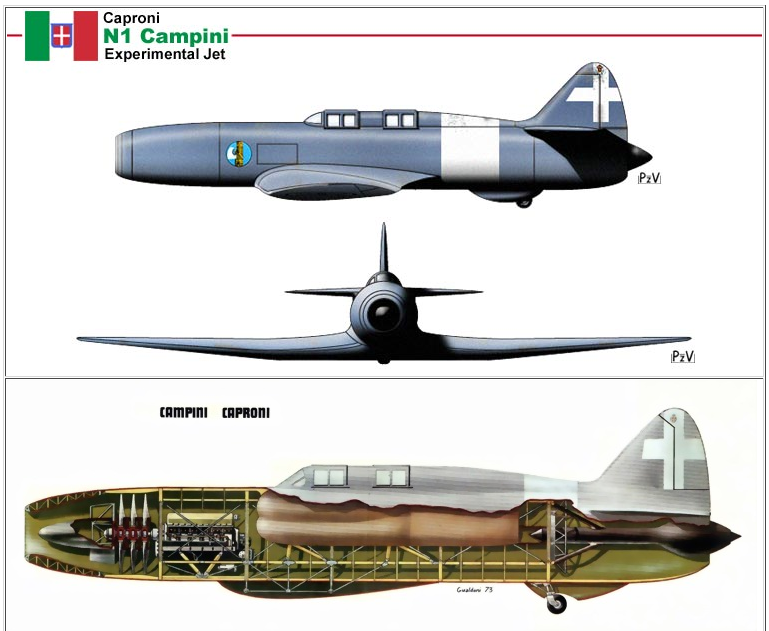 The 2nd jet to fly in the world after Heinkel He-178. The Italian used a motorjet which is an ordinary piston engine driving a compressor.
Also known as the C.C.2. it was an experimental aircraft built by the Italian aircraft manufacturer Caproni. Was powered by a motorjet, a type of jet engine that powers the compressor using a conventional aircraft engine. The N.1 first flew in 1940, and as news of the Heinkel He 178's flight in 1939 had not yet been made public, the Fédération Aéronautique Internationale listed the N.1 as the first successful jet-powered aircraft. Only 2 was built.

Testing revealed several issues with the engine; particularly the determination that it lacked the ability to produce sufficient thrust to achieve high performance if it were to be matched to a strengthened airframe to withstand the high loading pressures. One of the more unusual issues to be encountered during the flight test programme was the considerable amount of engine heat which was conveyed into the cockpit; in order to fly the aircraft, the crew were forced to keep the canopy open throughout the flight. Thought for 4 × 12.7 mm (0.500 in) Breda-SAFAT machine gun, never mounted weapons of any kind because it was just a technology demonstrator for early jet engines.

Testing of the two N.1 prototypes continued into 1943, however the programme was heavily hindered by events of the WW2, specifically the extensive Allied invasion of Italy. During an Allied bombing attack on Caproni's factory in Taliedo, one of the experimental aircraft was destroyed. After the war had reached its end in 1945, one of the remaining prototypes was transported to the England.​

"...however the program(sp) was heavily hindered by events of the WW2, specifically the extensive Allied invasion of Italy."
---
Yeah, can see where that could have been a bit of a problem.
Last edited: Nov 10, 2020

mTk said:
"...however the program(sp) was heavily hindered by events of the WW2, specifically the extensive Allied invasion of Italy."
---
Yeah, can see where that could have been problem.
Click to expand...

One could equally argue that this prototype would never have been conceived nor built if not for the war? ;D