I recently developed a map for CMBS. The map is 100% fictional and simulates the most common landscape for the countries of the former USSR. Now I can't wait to test it. In addition, it looks like I now have some free time for this game. I will try to do at least 5 turns per week.

The map still needs some flavor objects, but I hope that doesn't scare you. If you find anything bad there, I would appreciate your advice on how to fix it.

Battle:
It makes no odds for me to be an attacker or a defender. But I would like to play with several conditions:

- Rus against Ukr or Ukr against Ukr. Usually playing for Russia, I have played several matches against the USA. But then I found out that flagellation was banned by the Catholic Church back in the Middle Ages, so now I don't want to break this law.

- only 1 Tunguska for each side

- I would like to play with bad weather conditions, with fog, rain or both. I just haven't played H2H with conditions like this.

Aurelius said:
I would like to give it a go. Ukr vs Ukr, my condition(s) - no Oplots, BTR 4s, Skifs of Corsars.
Click to expand...

Agree with it. Let's start.

Too bad...Corsars are fun to play with

Two months later and we have concluded our PBEM game. The map in my opinion is Combat Approved! Just needs some minor tweaks to objective areas, and that is it.

It is very challenging to defend and to attack. Bad weather adds complexity.

Anyways, a mini AAR. Nektomans results are on the left, mine on the right. 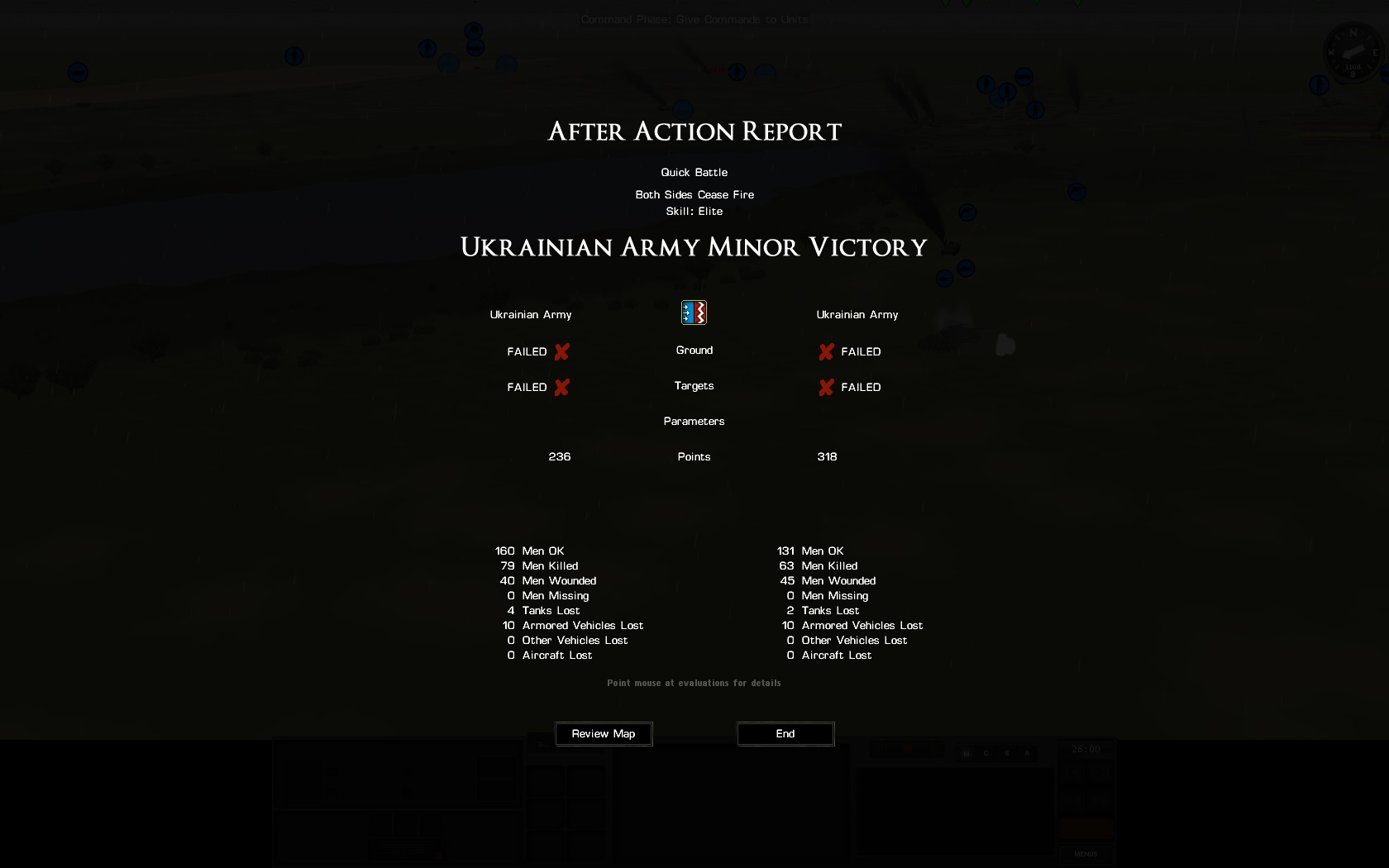 First major action was around abandoned cowsheds. I used my recce platoon aggressively, they took out one BRDM 2, fought with Nektomans recce units and dragged in another one of the Nektomans units into combat. The knocked out BRDM 2 in the background was taken out by Fagot. At 1800 meters - it was very beautiful to watch. 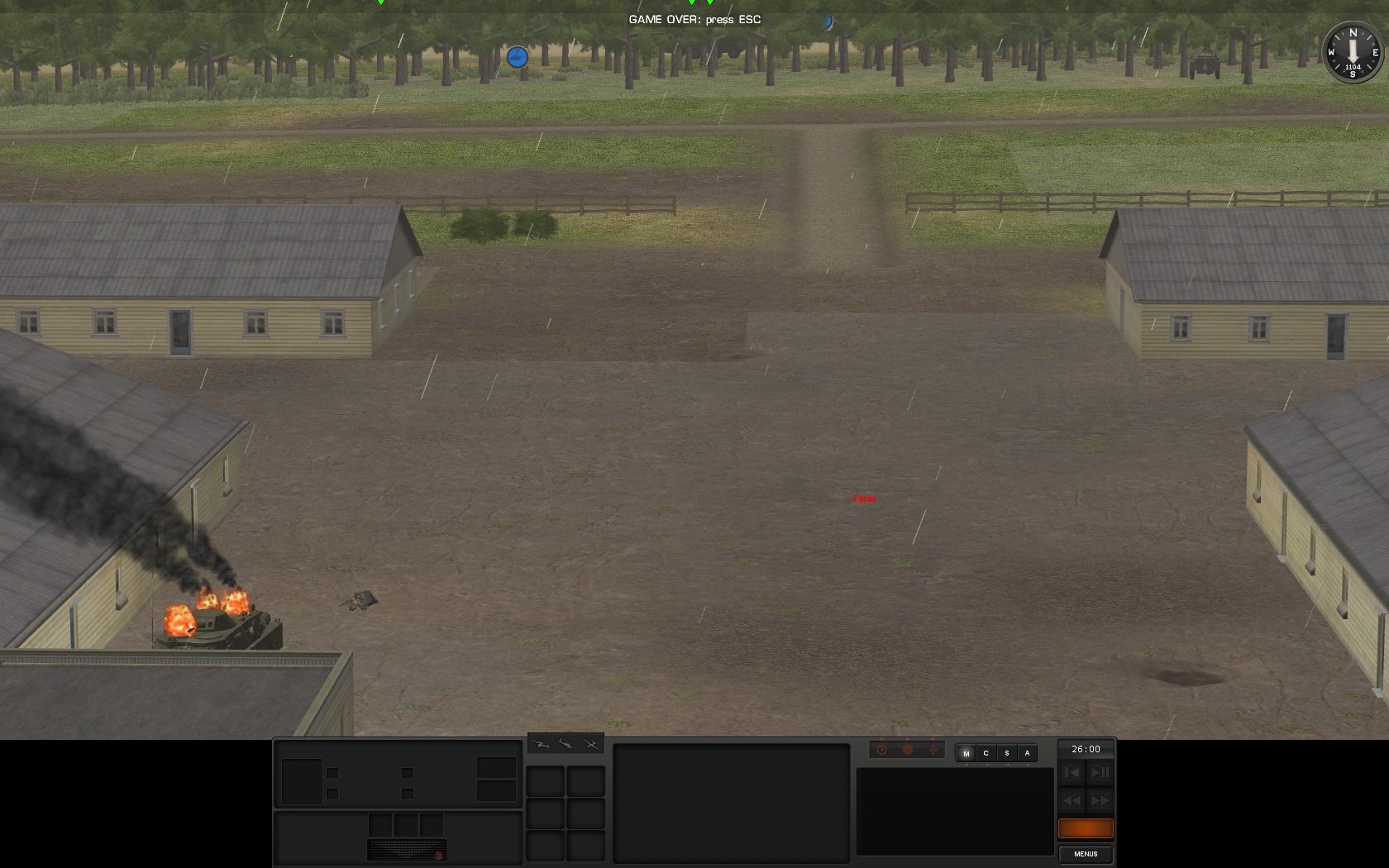 After some time, the attack began. The main axis of advance can be traced by burning and abandoned wrecks. I decided to enact ATGM terror campaign. It had its physical effects, but the main effect was on the psyche of my enemy. They were firing from 1.5 km away and he had no way of discovering them

In the first image, the destroyed BMP 2 and BTR 70 were full of infantry. If memory serves me right, one of them had an HQ unit. 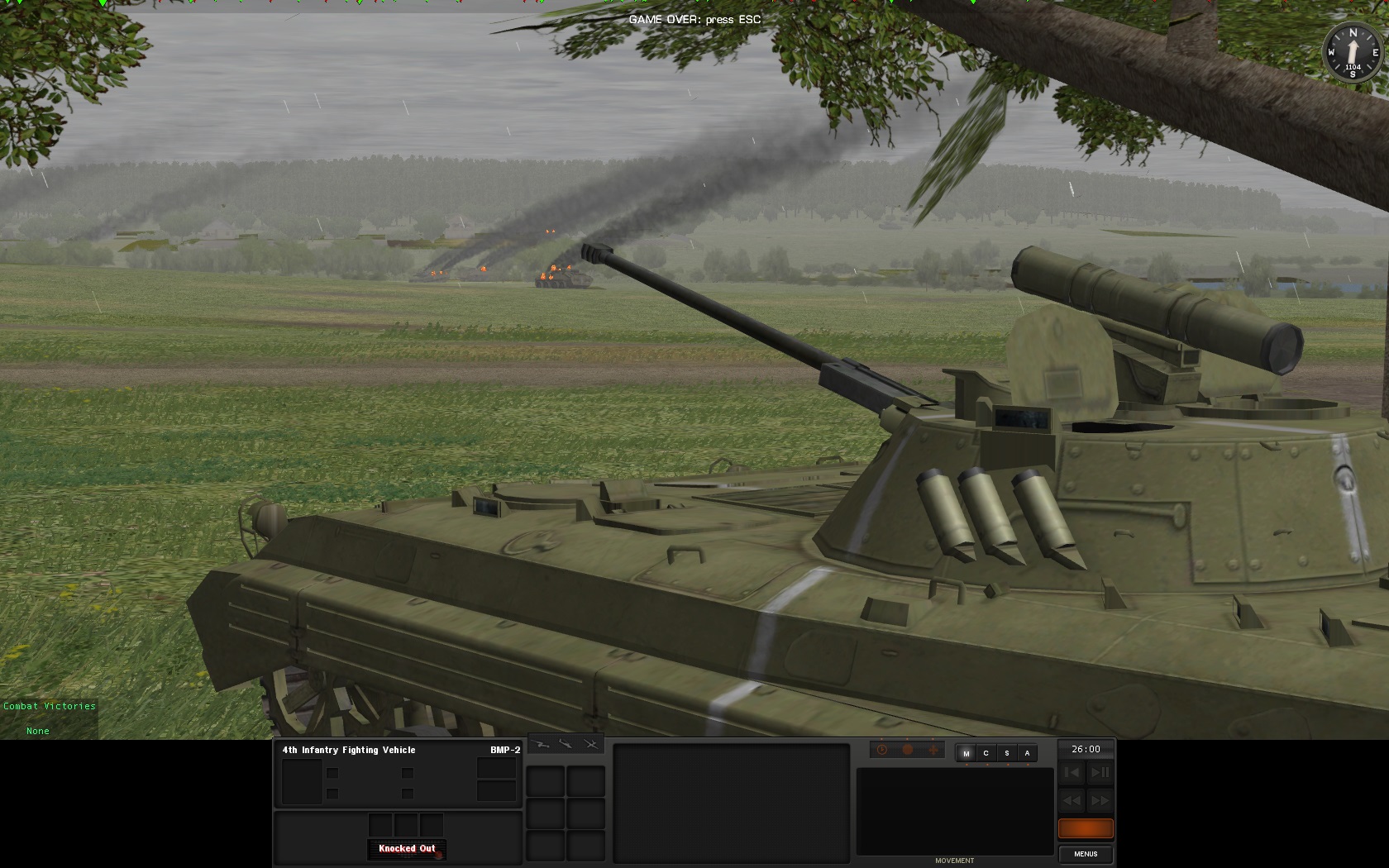 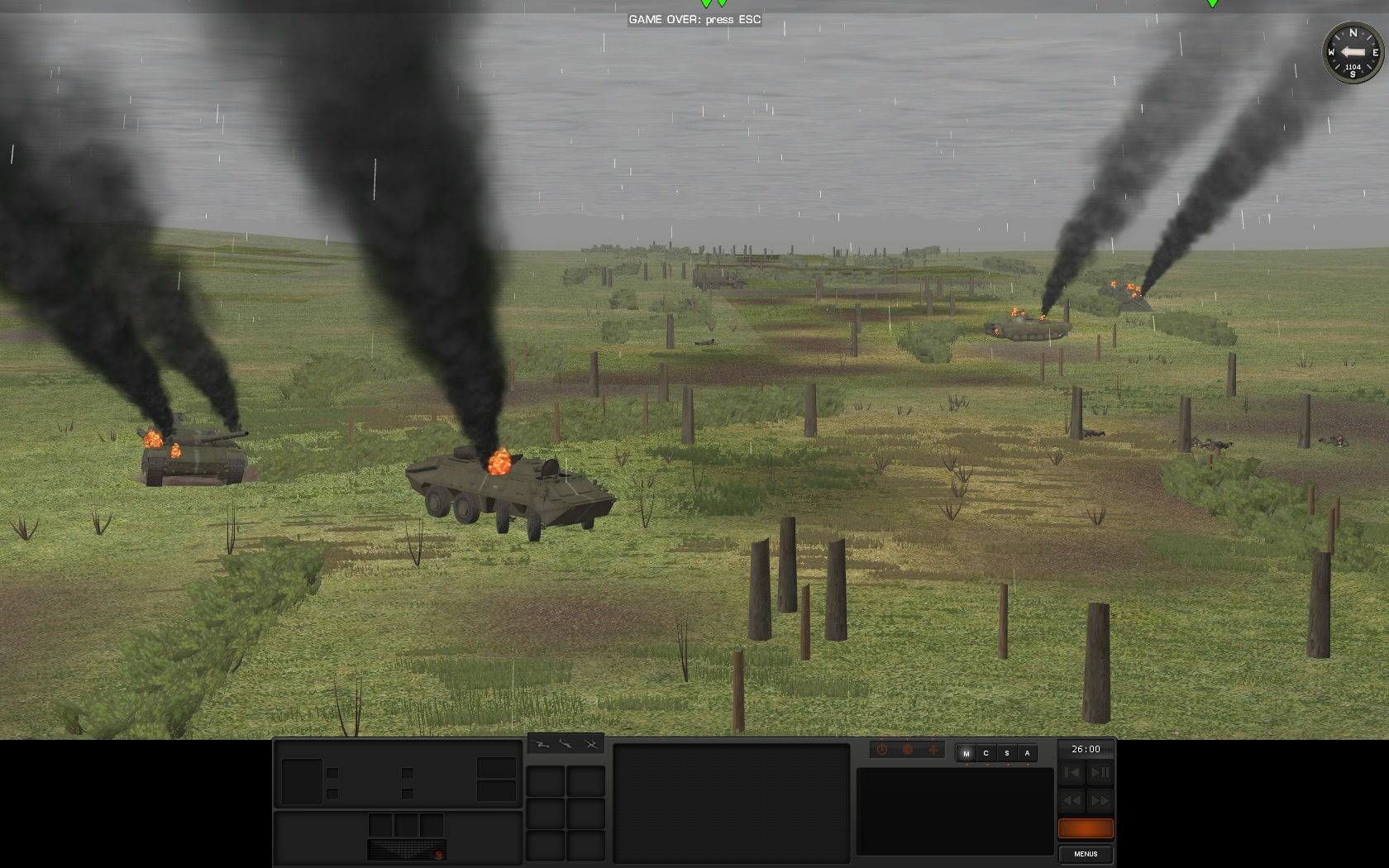 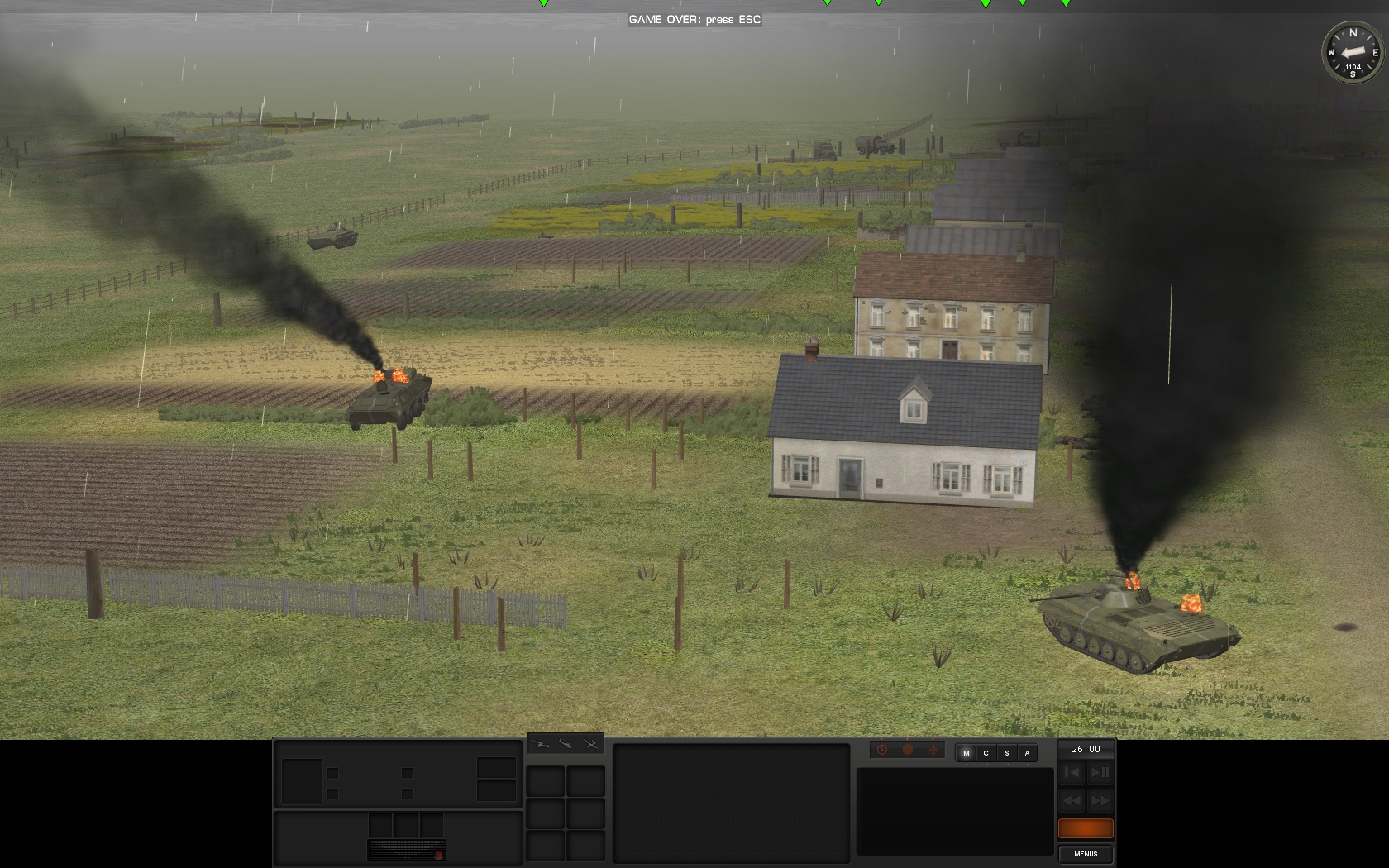 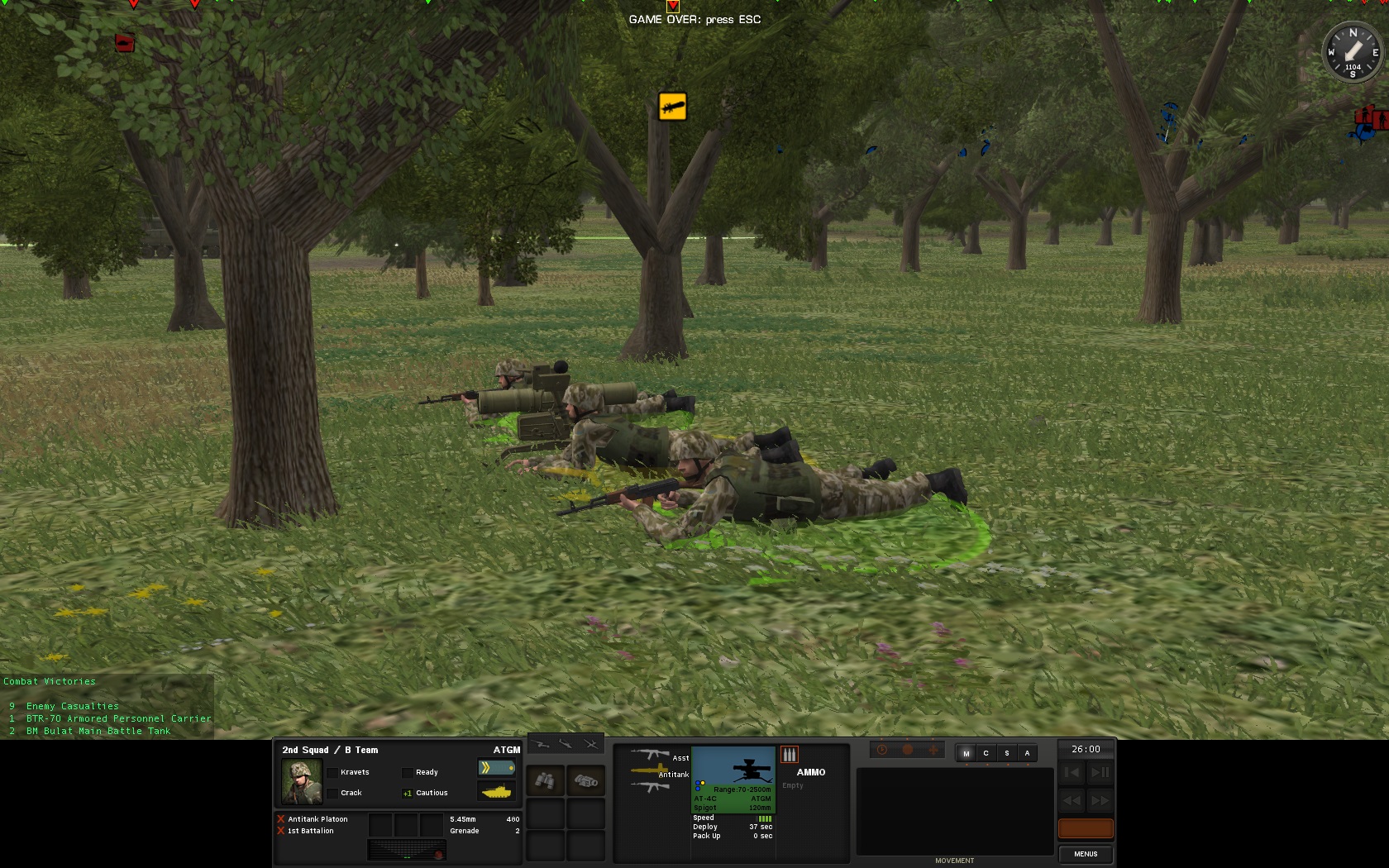 In the end, the site of tragi-comical duel between two T-64s. Many shells were fired, unable to penetrate the frontal ERA and armor. The duel was decided by GLATGMs! 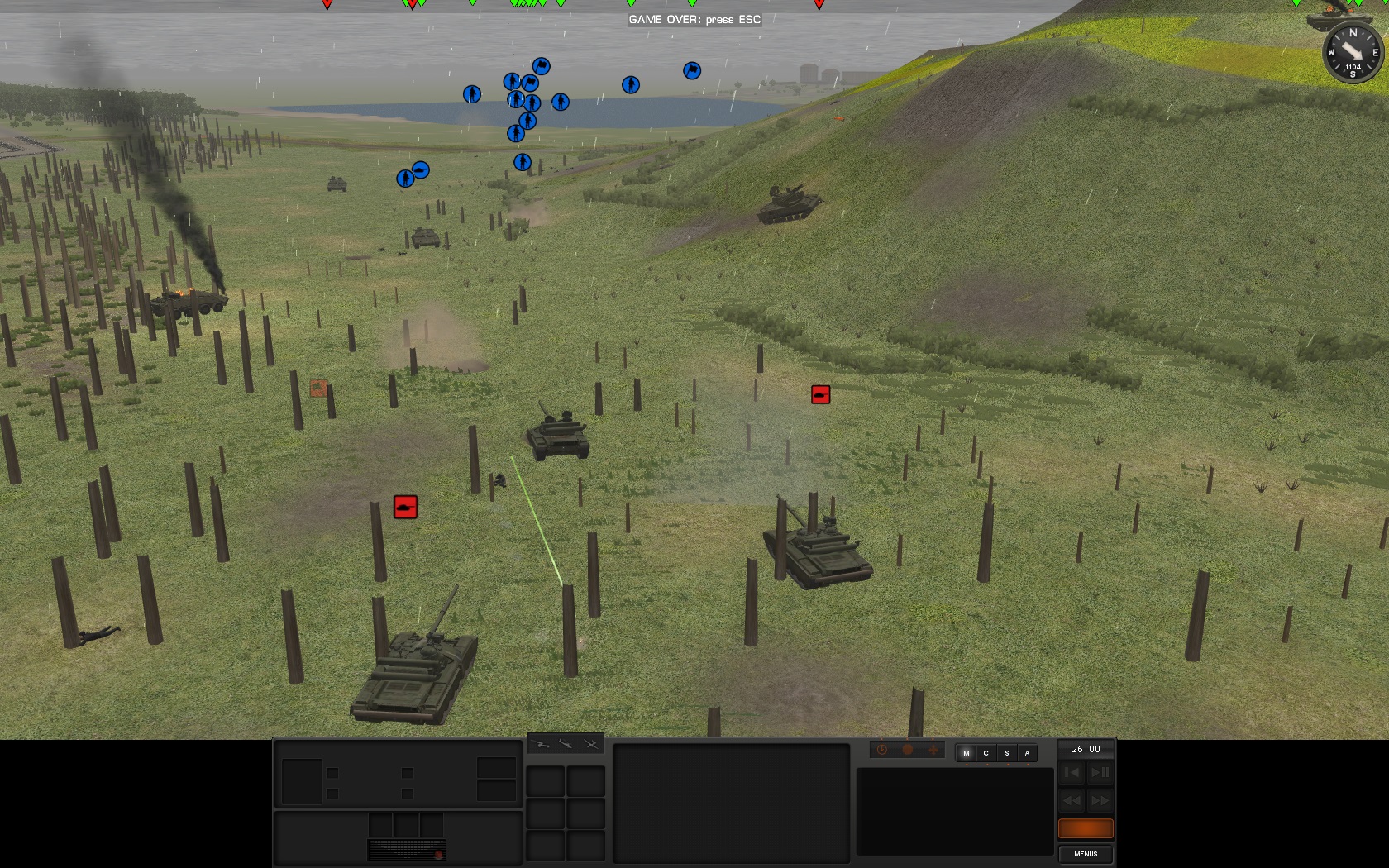 Very enjoyable battle. I was very worried when the attack on the main axis began, but slowly I managed to degrade the combat effectiveness of the force. Overall, I am satisfied with how I handled infantry. Can't say that about my armored forces...

Thank you, it was a beatiful report. Now I feel obliged to give a view from my point.