The 1956 Hungarian Uprising, often referred to as the 1956 Hungarian Revolution, is considered by many as the nation's greatest tragedy. The Uprising was an almost spontaneous revolt by the Hungarian people against the ruling Communist Party of the time and the Soviet policies which were crippling post-war Hungary. It comprised of several major events, beginning with a student protest on 23rd October in Budapest and ending with a proclamation by Soviet-backed Janos Kadar on 11th November that he had crushed the Uprising. Around 2,500 Hungarians died in the course of the Revolution. 200,000 fled to the West in the aftermath of the struggle.

After World War II, Russian troops still occupied Hungary and they had no plans of going anywhere as Stalin sought to extend his sphere of influence as far and wide as possible. In 1949 the Hungarians were coerced into signing a mutual assistance treaty with the Soviet Union, granting them rights to a continued military presence and thereby assuring ultimate political control. Gradually power was transferred from the freely elected Hungarian government Independent Small Holders Party to the Soviet-backed Hungarian Socialist Workers' Party led by the sinister Matyas Rakosi.

A man of Stalin's ilk, Rakosi began an authoritarian regime over Hungary and set about communising the country and purging the nation of dissidents, arresting or executing his political opponents. Meanwhile his mishandling of the economy led to drastic falls in the quality of life for virtually every Hungarian.

Things got better in 1953 with the death of Stalin, when the far more liberal Imre Nagy took over as prime minister. Unfortunately Rakosi was able to hold onto a decent slice of political power as General Secretary of the Hungarian Workers Party. As Nagy set about releasing anti-Communists from jail and removing state control of the media, Rakosi campaigned against him, eventually managing to discredit him and have him voted down from his post. Rakosi once more became the nation's leading politician only to be forced from power when Nikita Khrushchev (who had succeeded Stalin in the Kremlin in Moscow) made a speech denouncing Stalin and his followers. Before he stepped down however Rakosi secured the appointment of his close friend Erno Gero as the new General Secretary. The scene was still ripe for unrest.

It turned out that events in Poland were the trigger for the Hungarian Revolution. After workers in Poznan had staged mass protests earlier in June 1956 (which although they were violently put down by government forces, worried the Soviets in Moscow), Wladyslaw Gomulka has managed to negotiate wider autonomy and liberalization for Poland. [The year before Austria had managed to declare itself neutral and avoid joining the Warsaw Pact]. There was hope by many Hungarians that something similar could be achieved for Hungary, and when students of the Technical University (who had become a strong political voice) heard that the Hungarian Writers Union planned to lay a wreath at the statue of Polish-born General Bem to express solidarity with pro-reform movements in Poland, they decided to join them.

So it was that in the afternoon of 23rd October 1956 fifty thousand people gathered at the statue of General Bem. It was to those assembled that Peter Veres of the Hungarian Writers Union read out a proclamation of independence, to which the Techies added a sixteen point resolution demanding everything from the withdrawal of Soviet troops from the country to the right to sell their uranium deposits on the free market. National songs and mantras were sung, and the communist coat of arms was torn from the Hungarian flag.

After this the crowd marched across the Danube to demonstrate outside the Hungarian Parliament. By 6pm, 200,000 people had gathered and the mood was spirited but peaceful. However, at 8pm Erno Gero broadcast a speech dismissing the demands of the Writers' Union and the students and labelling the crowds a 'reactionary mob'. This uncompromising stance prompted the Hungarian people to take things into their own hands and so they carried out one of their demands of the sixteen point resolution, tearing down the statue of Stalin which had been erected in 1951.
Last edited by a moderator: Jul 25, 2017

Afterwards a large portion of the crowd marched upon the Radio Budapest building in order to broadcast their demands on air to the nation. However, the AVH (Hungarian Secret Police) were guarding the radio station, and they barricaded the building. As the situation escalated the crowds grew more unruly and attempted to take the station by storm, which is when the first casualties of the Hungarian Revolution fell... The AVH opened fire on the crowd.

This cold-blooded killing provoked a full scale riot, in which Hungarian soldiers sided with the people against the AVH. Police cars were set on fire, weapons were seized and Communist symbols were torn down and vandalised. That night Erno Gero called on military intervention from the Soviet Union to suppress the uprising.


Around 2am on the 24th October the first Soviet tanks rolled into Budapest and took up positions outside the parliament building. Meanwhile Soviet troops took up key positions in the city. They met pockets of armed resistance as revolutionaries erected barricades and sporadic violence ensued. Imre Nagy was re-appointed as prime minister in the hope that the populace would be appeased, and Nagy called an end to the violence with promises to push ahead with reforms. However, when a Soviet tank fired upon unarmed protesters in Parliament Square on the 25th October the fighting escalated. Erno Gero was forced to resign as First Secretary, with Janos Kadar replacing him.

The Soviet troops and their AVH cohorts continued to fight against the revolutionaries until the 28th October, when the Soviets retreated from the city. Nagy offered an amnesty to all involved in the violence, promised to abolish the AVH, released political prisoners and made clear his intention that Hungary had cut free from the Warsaw Pact. The mood was defiantly optimistic. For a short while it seemed that Nagy was going to be able to achieve the Hungarian people's wishes for a neutral, multi-party nation.

Hungary's Fate is Decided in Moscow

The Soviet Union's new leader Khrushchev was no Joseph Stalin, and the matter of Hungary's independence was much debated in Moscow, with much consideration given to negotiating the withdrawal of troops from the country. However, with the Cold War in full freeze there were other factors to consider: "If we depart from Hungary, it will give a great boost to the Americans, English, and French Ã”Ã¸? the imperialists." The Soviet Union couldn't afford to lose ground in the power struggle of ideologies. The order was given to invade.


The (Soviet) Empire Strikes Back

The second Soviet intervention left no one guessing their intentions. In the early hours of the morning of the 24th an estimated 1,000 tanks rolled into Budapest, destroying the fierce but uncoordinated resistance of the Hungarian Army to occupy the key positions in the city. Imre Nagy made his final broadcast to the world at 0515 in the morning, appealing for international help (however Western powers were far more concerned at the time with the Suez Crisis). Less than an hour later and Janos Kadar, in league with Moscow, proclaimed himself head of a new "Hungarian Revolutionary Worker-Peasant Government". He declared that he was calling on Soviet help to put down a counter-revolution that was financed by the Imperialistic western powers, and to restore order.

This 'restoration of order' was backed up by heavy artillery and air strikes as Budapest became embroiled in a bloody battle. Civilians bore the brunt of the casualties as Soviet troops were often unable to distinguish between citizen and freedom fighter, often firing indiscriminately at people and buildings.

It was only a matter of time before the far better organised and better equipped Soviet forces crushed the revolution. By November 10th the fighting had all but ended and on the 11th Kadar declared that the uprising had been crushed. 2,500 Hungarians had died, with another 13,000 injured. Over seven hundred Soviet soldiers also gave up their lives, some being executed for refusing to fight.

Hungary's suffering didn't end with the crushing of the uprising. Recriminations followed with tens of thousands of Hungarians arrested, imprisoned and deported to the Soviet Union, often without evidence. An estimated 350 were executed, including Imre Nagy after his eventual arrest in 1958. Meanwhile 200,000 people fled Hungary, either fearing for their lives or simply to escape from the Communist regime - many of them were Hungary's best educated people.

However, despite seeming to sell out to the Soviets, Kadar proved to be a better leader for Hungary than many expected. After the excessive crackdowns of the post-revolution period, he successively eased much of the oppression felt by the people, famously declaring "who is not against us is with us". He also engineered a unique brand of Communism which incorporated elements of free market economics which was later dubbed "Goulash Communism". Indeed, Hungary was considered one of the "Happiest Barracks" of the Soviet camp right through to 1989 when the Iron Curtain finally cracked - this time irreparably.
Last edited by a moderator: Jul 25, 2017
F

Herein lies the start of my anti-communist indoctrination. While I only have vague memories of these times (I was almost 7), the anti Commie talk of my uncles would stay with me all the way to the Tet Offensive of 1968, when I enlisted to fight the Commies myself. I'd be damned if I would let them take over Vietnam as they had Hungary and later Czechoslovakia. What a naive young man I was, perfect cannon fodder. My first insertion into combat in the DMZ just north of Con Thien, would reveal some of the fallacies in my logic and begin the process of changing me forever.

Janos Mesz (1931/1956), also known as “Janko of the wooden leg”, one of the leaders of the rebel group Corvin Lane, during the 1956 insurrection in Budapest.

A rebel in Budapest during the Hungarian Revolution, 1956.

Two Soviet ISU-152 positioned in a street in Budapest 8th District. An abandoned T-34/85 stands behind them. 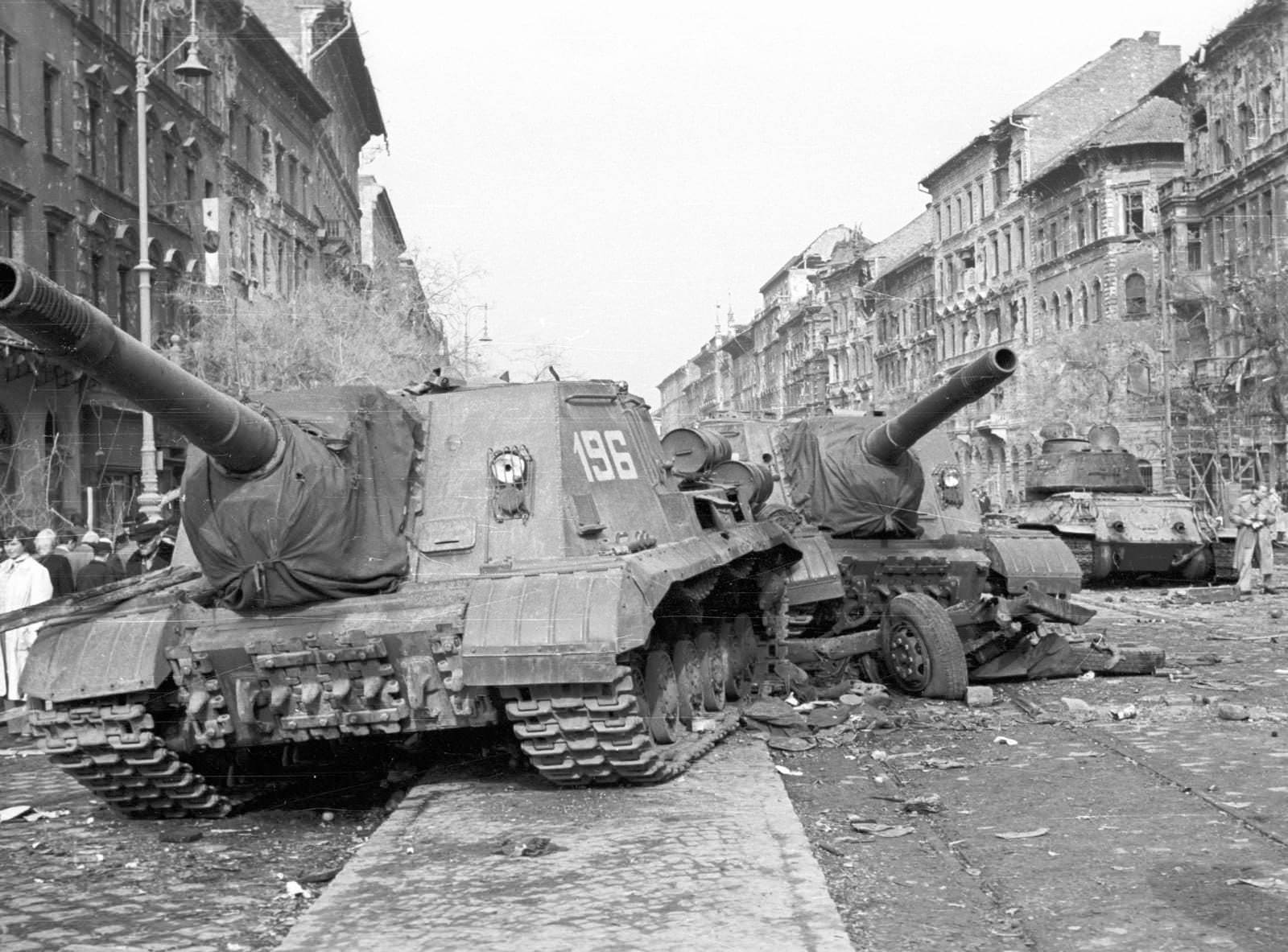 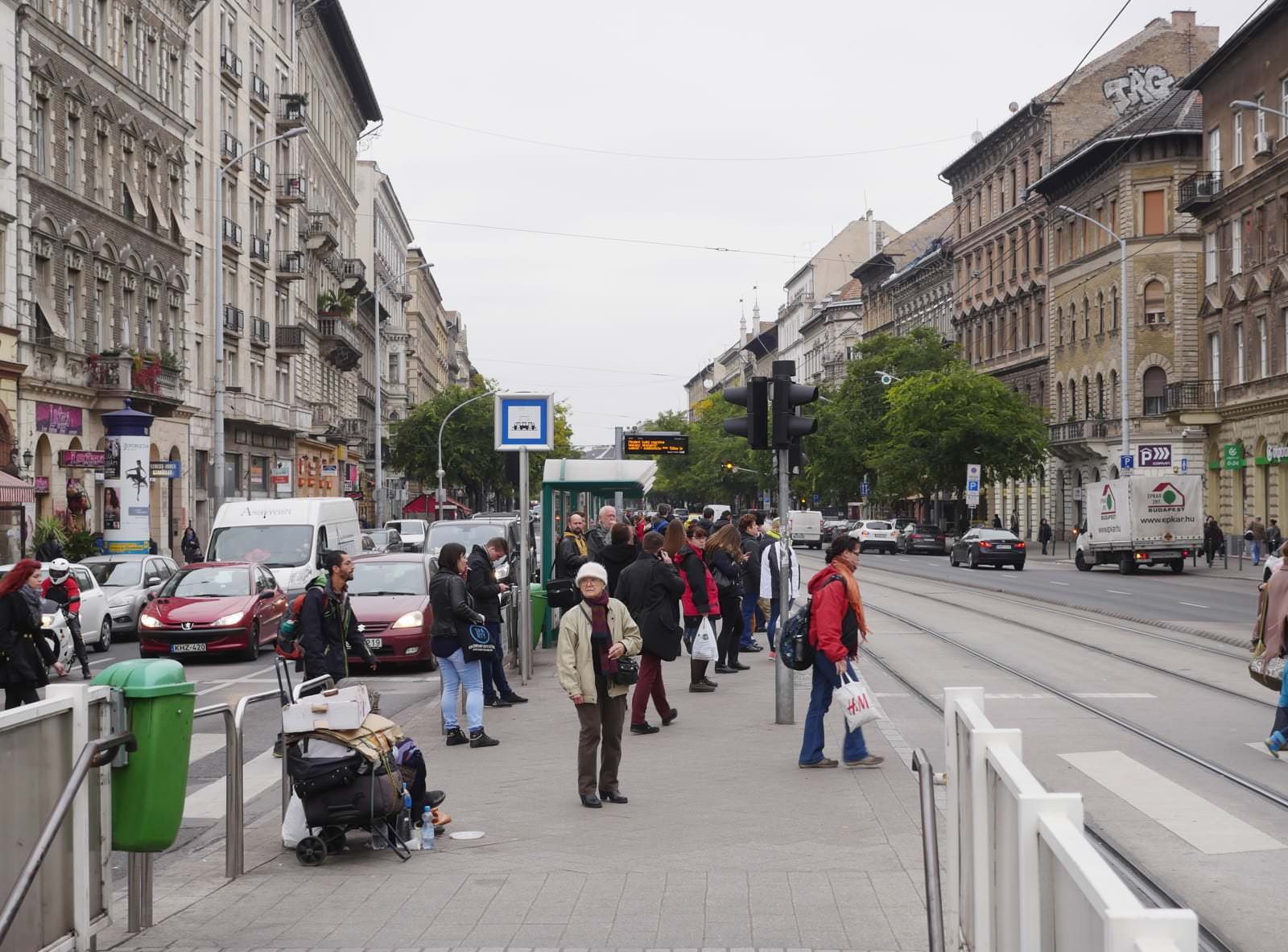 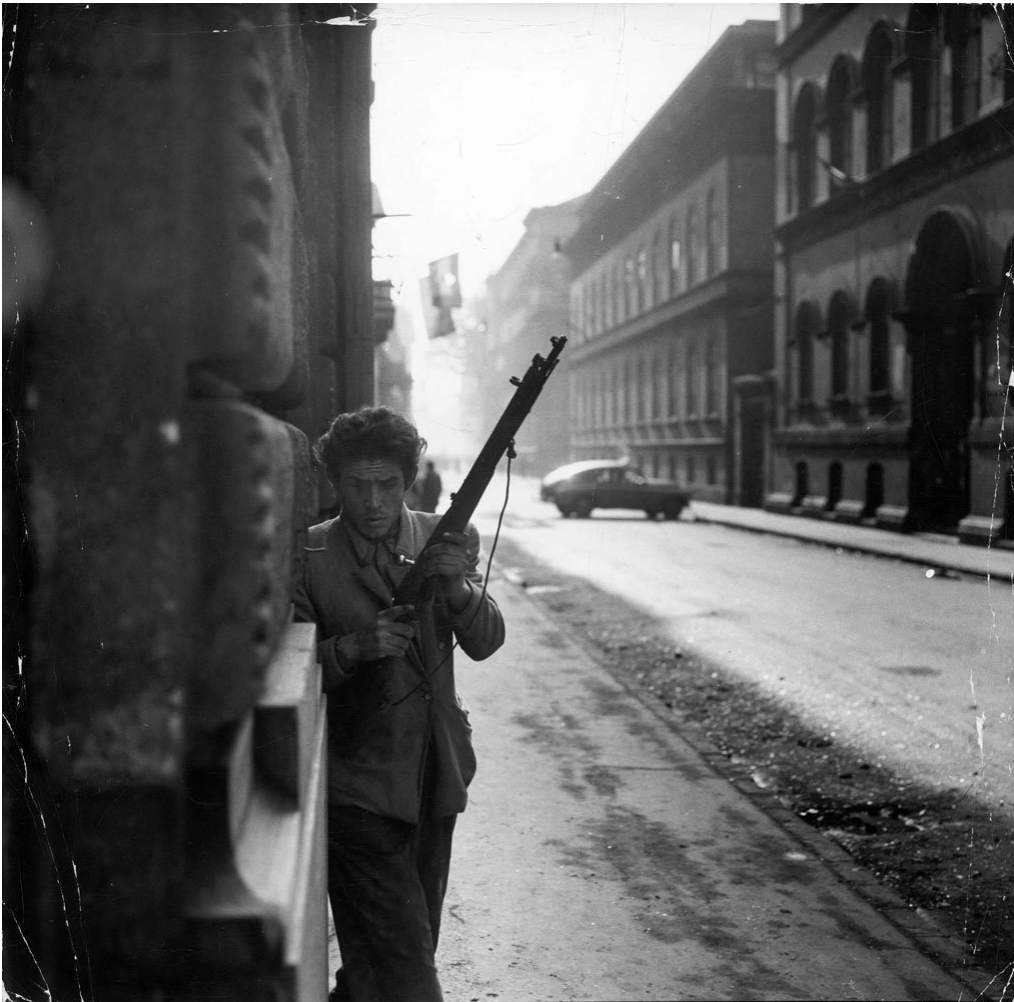 Curious around a destroyed T-34/85 tank at the Móricz Zsigmond Square in Budapest. 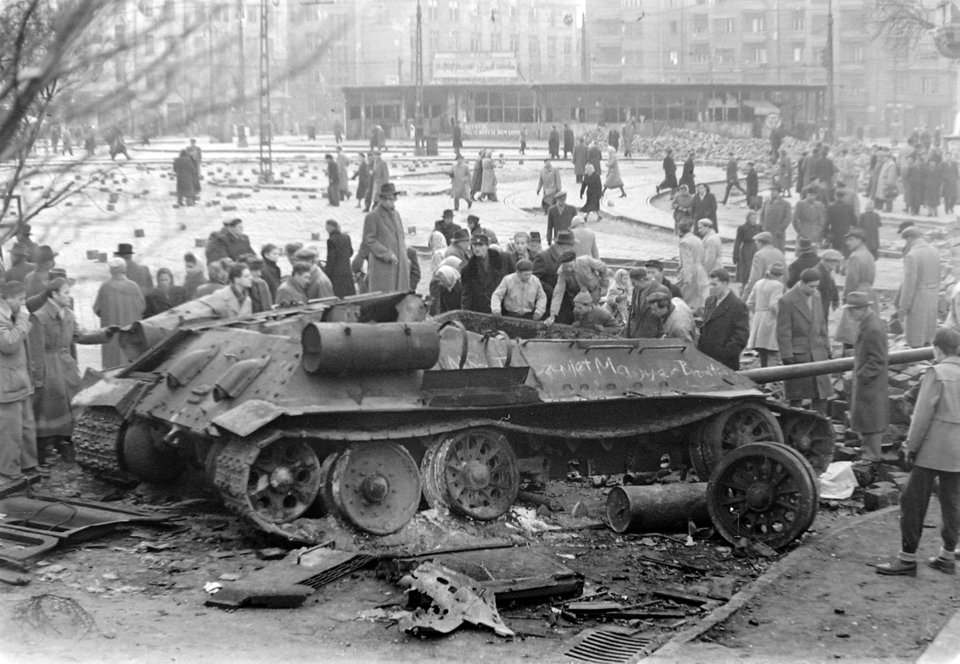 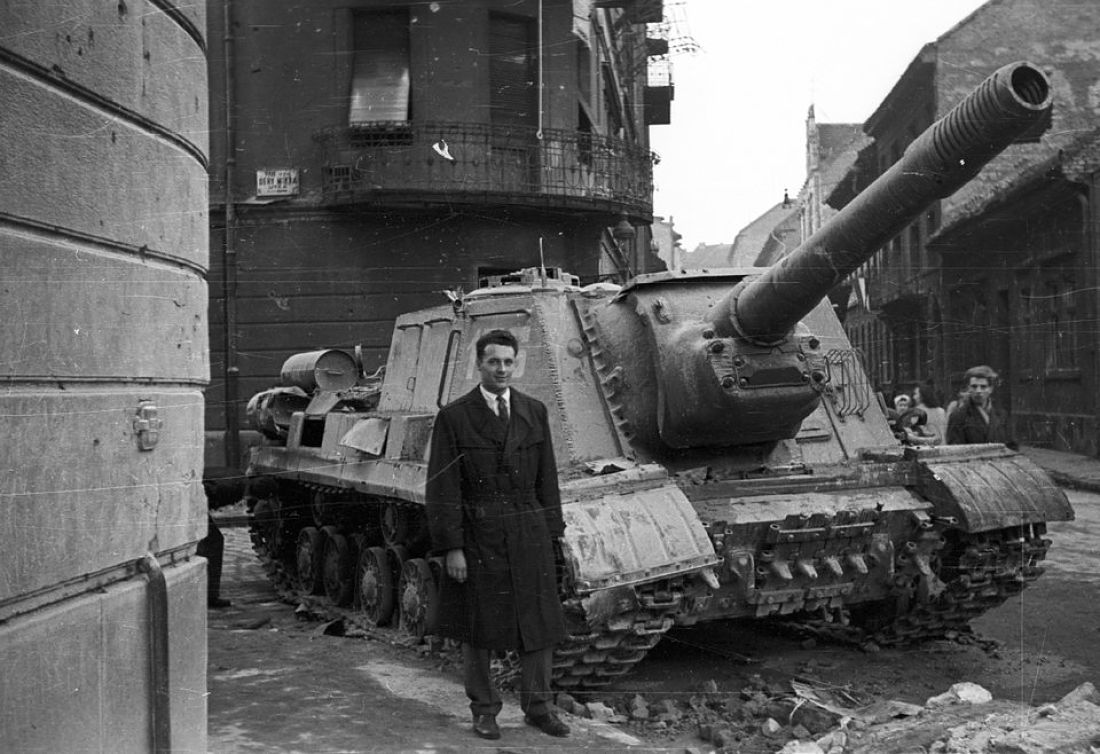 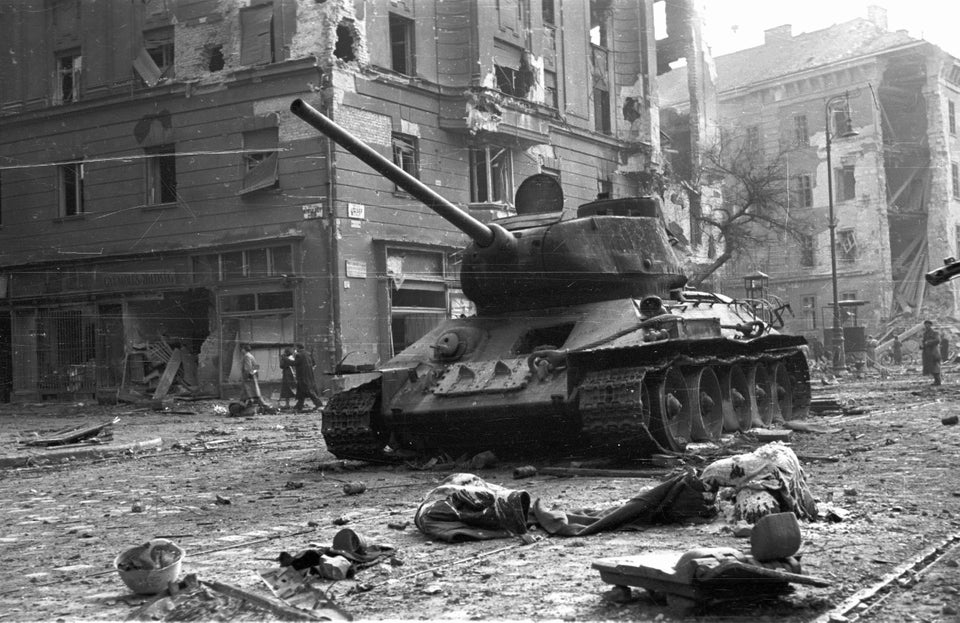 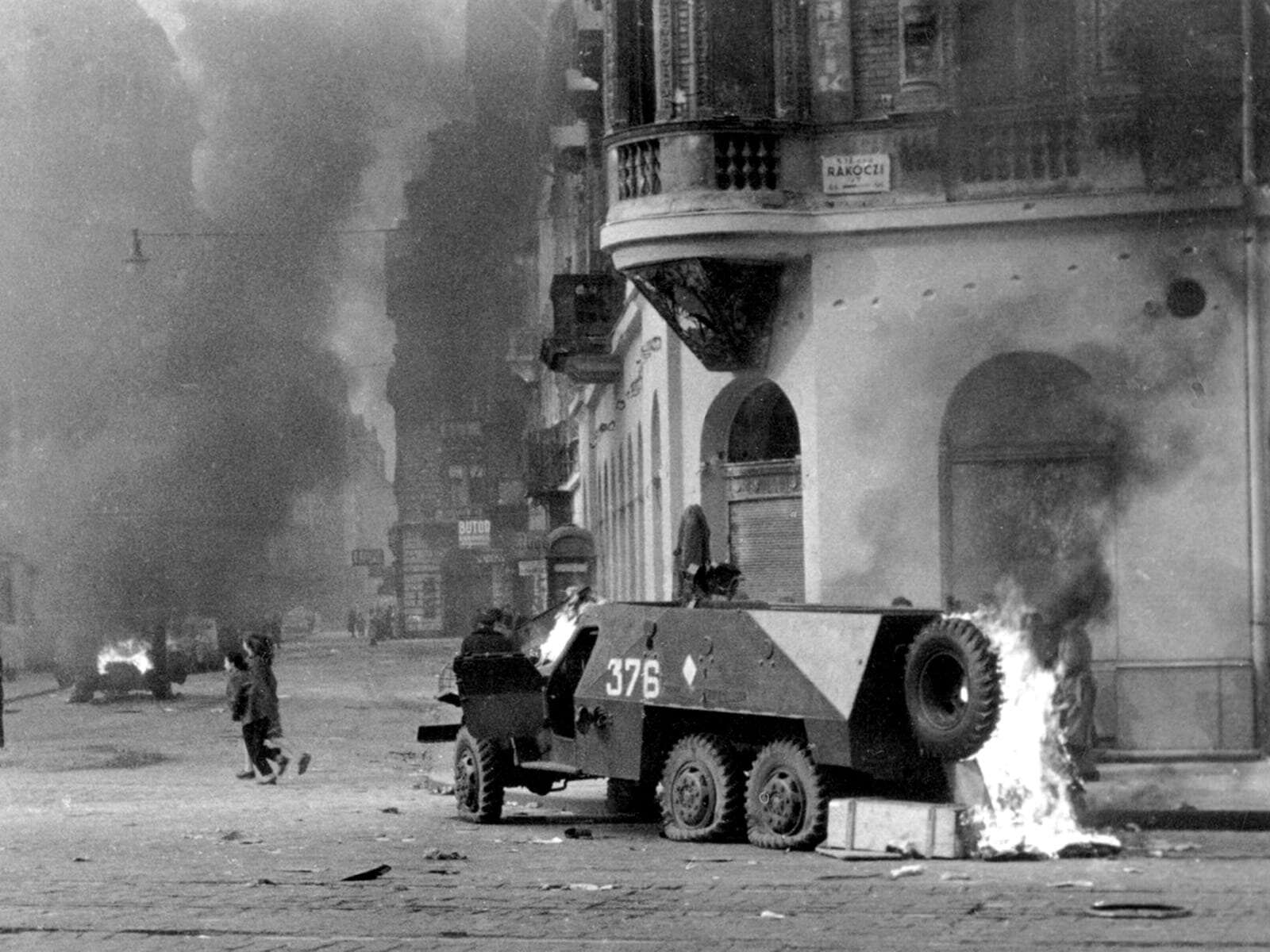 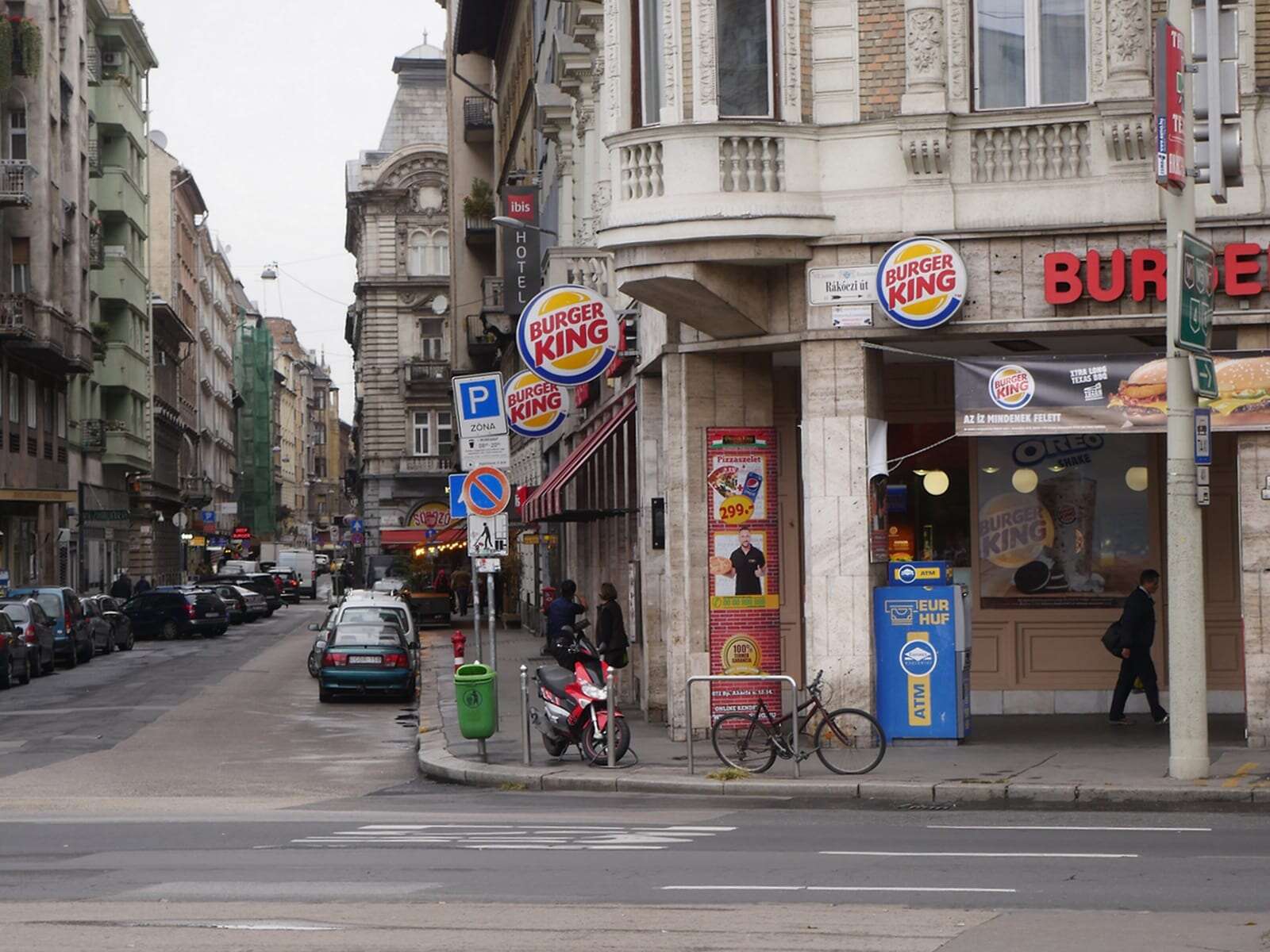 the cafe down the street looks interesting though