The initial Junkers Ju-52, nicknamed “Tante Ju” or “Auntie Ju” and “Iron Annie”, was powered by either a single BMW or Junkers liquid-cooled engine . Since it lacked performance, in 1931. on 7th produced aircraft, two additional engines were added. First three engine prototype was powered by 3 Pratt & Whitney Hornet radials, delivering 550 hp (410 kW) each.- 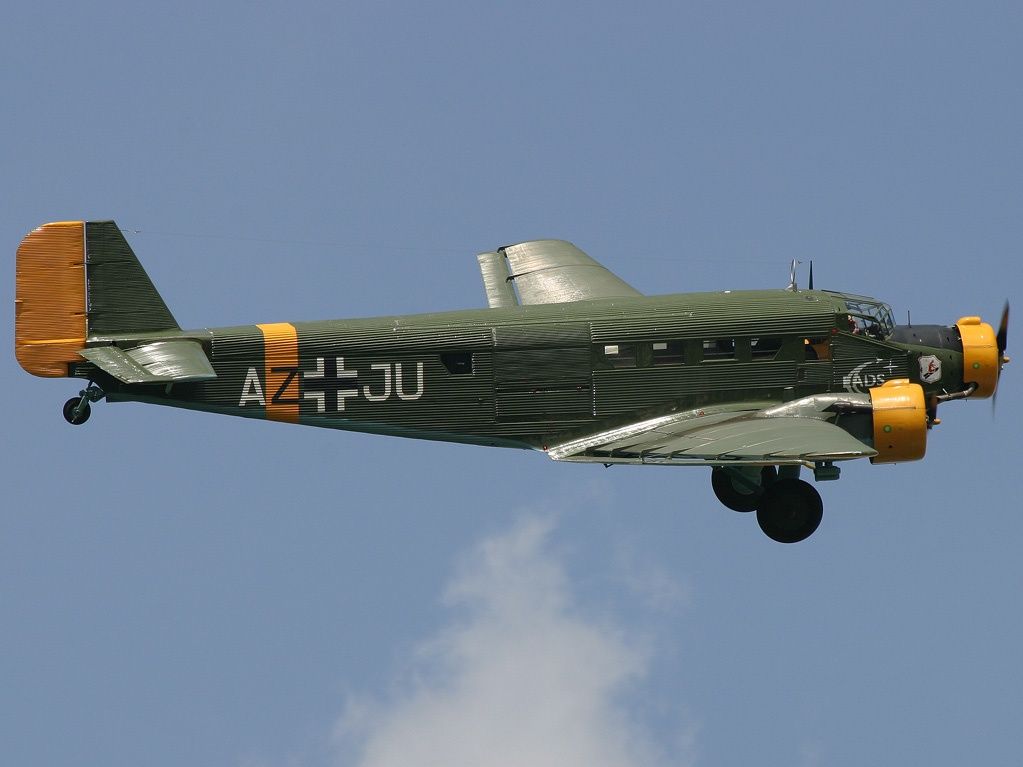 Before WW2, the Junkers Ju-52 served as an airliner in many countries. It was used for passenger transport and as mail carrier. The Ju 52/3m was the leading European civil airliner of the 1930s, seating 15 to 17 passengers. Some of the Ju-52/3m were luxurious equipped with typewriters and oxygen masks. The oxygen supply system was monitored by the radio operator and could be switched on at passengers request.-

The military potentials of the Junkers Ju-52 was examined by the Luftwaffe. They placed orders in 1934. for bomber version of Ju-52/3m as a stop-gap until new , purpose designed, Dornier Do-11 were delivered. As a bomber, Ju-52 had two bomb bays capable of carrying p to 1.500 kg (3.300 pounds) of bombs. For protection from fighters, defensive armament consisted of two 7.92 mm MG 15 machine guns. One gun was mounted in a opet dorsal cockpit and one in retractable ventral “dustbin”. Retractable “dustbin” was manually winched down from the fuselage to protect airplane from attacks from below.- 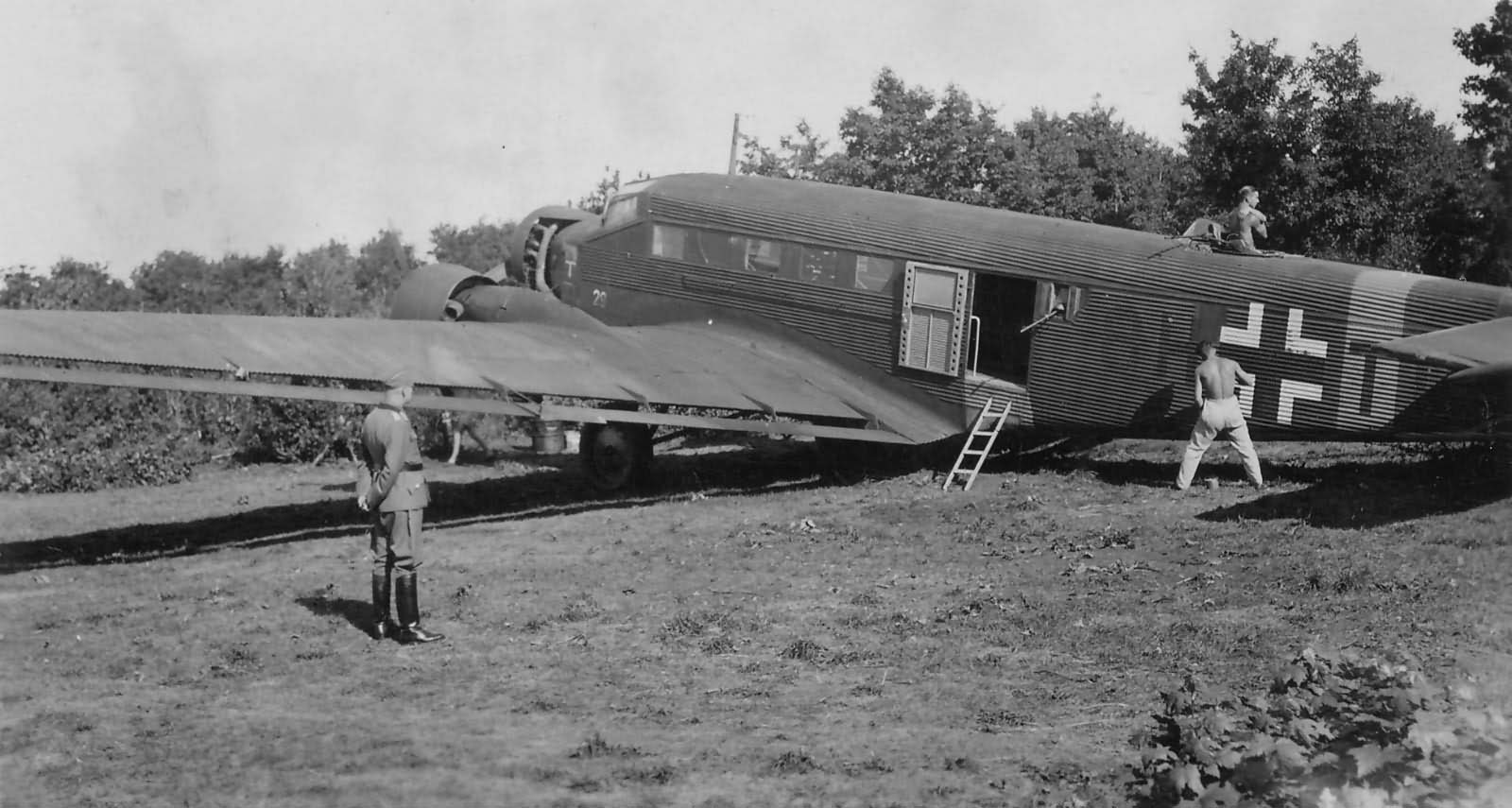 At the begining of World War II in 1939. Ju-52 was extensively used in airborne assault operations and supply missions. Junkers Ju-52 served in every theater in which Germany participated. It dropped paratroopers in the Netherlands, Crete and later the Ardennes.It carried supplies to beleaguered troops in North Africa, Stalingrad and the Baltic states. The Ju-52 was slow and very lightly armed against fighters. As a result, it suffered horrible losses in almost all actions, especially over Crete, the Mediterranean and Stalingrad.-

After the WW2 Junkers Ju-52 continued its carier in both military and civil transportation.- Longest service Tante Ju had in Swiss Air Force where it remained until 1980s.

They had one of these still flying in Hamburg, a few years back.
Airfix or perhaps it was Revel did an excellent model of this plane.

And Louis, You forget to say why the Ju was named IRON Annie. The whole plane was built of metal. A novum to it´s time. The predecessor was the F 13 which wasn´t official built in Germany because of the restrictions of the Entente powers after 1st WW. So Junkers merged with Larsen to the Junkers-Larsen-Aircraft-Corporation. Larsen was an american and had his domicile in New York City. Larsen sold a few planes to the US military and even two planes with swimmers to the US Navy. The two planes were named JL6. The F 13 was a four seat plane with different possibilities - from medic plane to crop duster etc. Even the USSR built that plane as JU 13. The F 13 was a civil plane only. The JU-52 was built as civil plane too but was concepted (already in development phase) for military service too - and that already from the beginning. Only slight changes had to be taken and - voila - You had a bomber. It should be a fill-in till the Do bombers would be available.

Junkers Ju 52 used as a medical transport ... looks like the fuselage black "Balkenkreuz" was just painted red as a temporary measure? -- no info of where or when this was taken.

The Lufthansa D-AQUI from 1936 with a fitted out cabin and a smoking space at the front.

The Junkers JU-52 was flown by several companies both for passenger and freight transport. Air France, Aigle azur and TAI were notably the French companies to use this airplane and internationally it was used by Swiss Air, BOAC, Iberia and others.

A downed Junkers plane in Stalingrad, 1947. 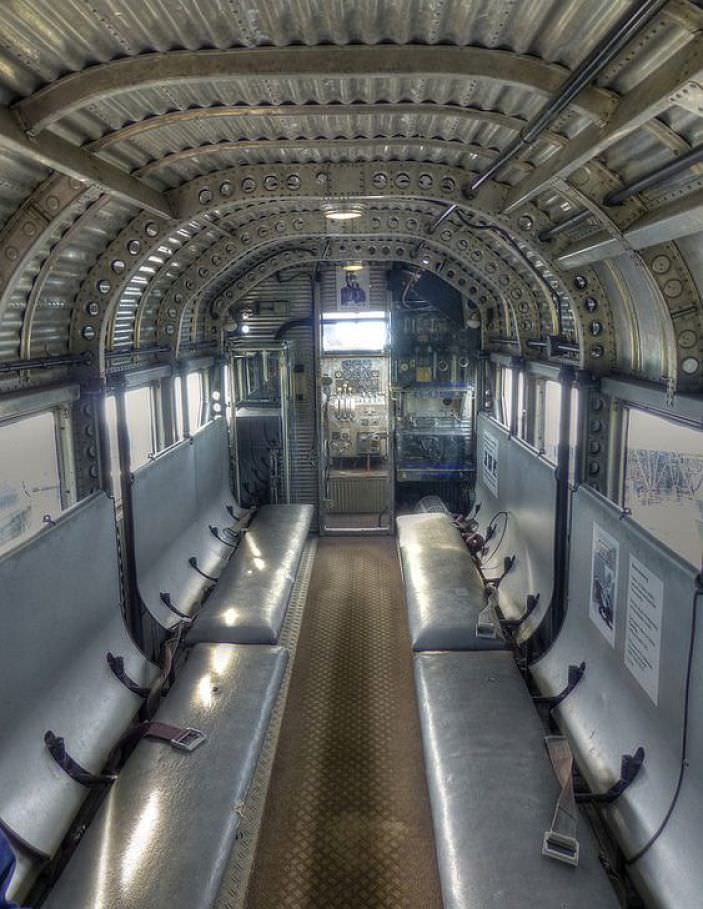 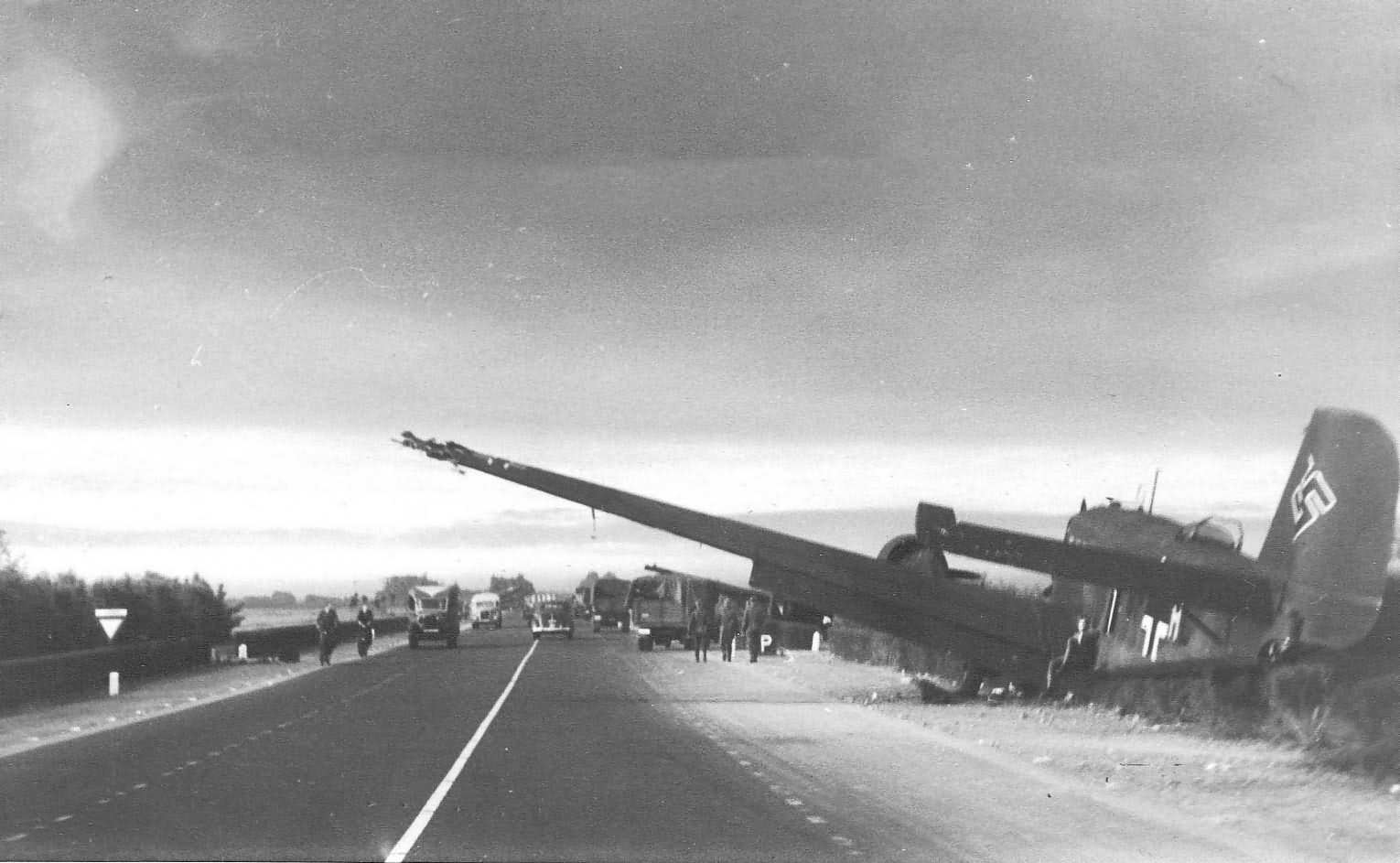 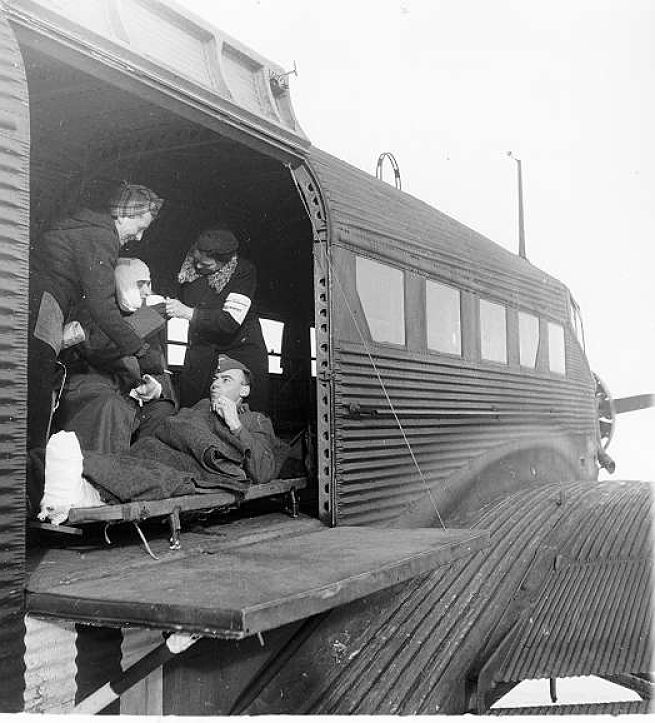 Ju-52 drop paratroopers over The Hague during the German invasion of the Netherlands, May 1940. 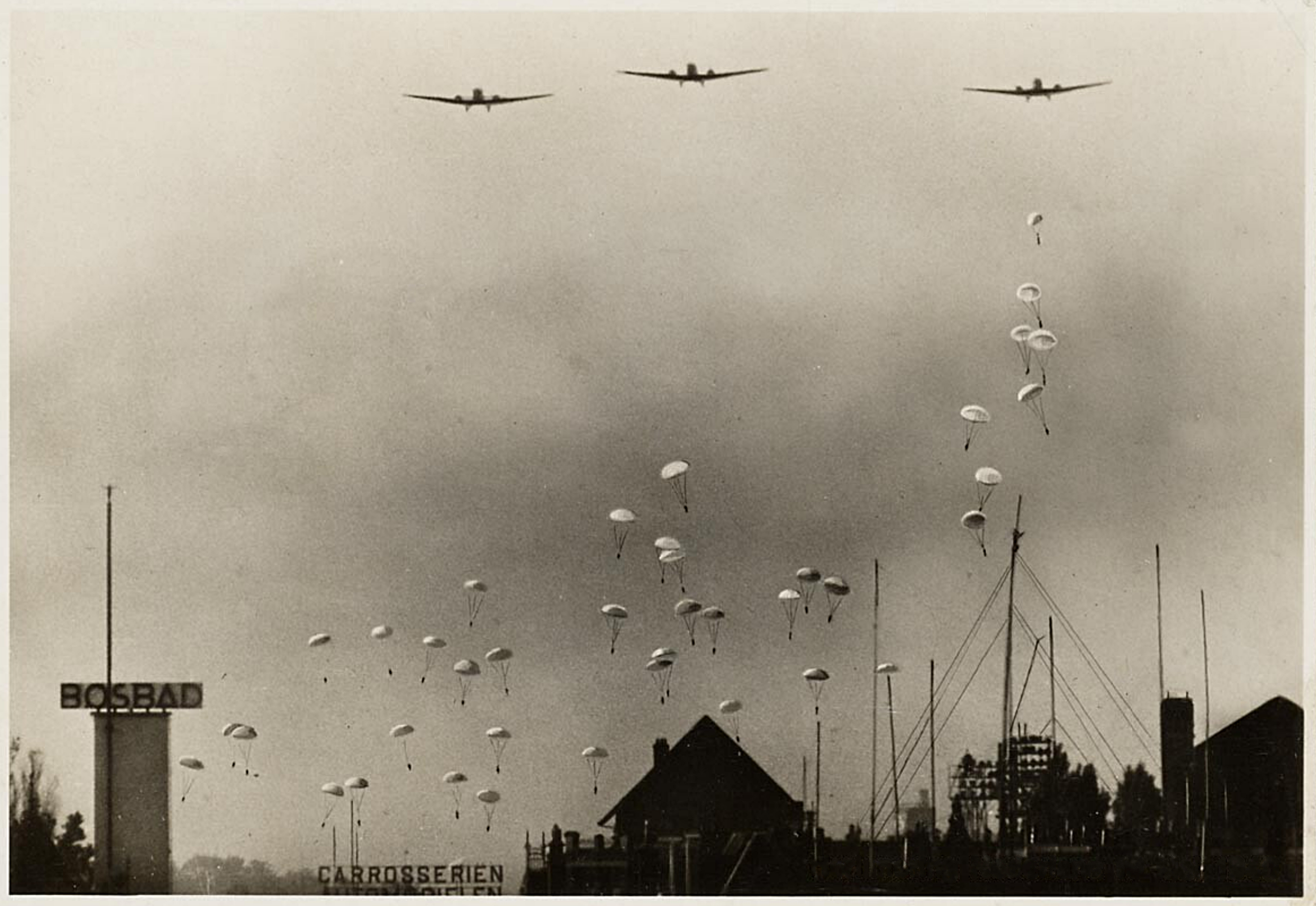 German paratroops ready to board their Ju52 transport before the Crete operation in 1941. 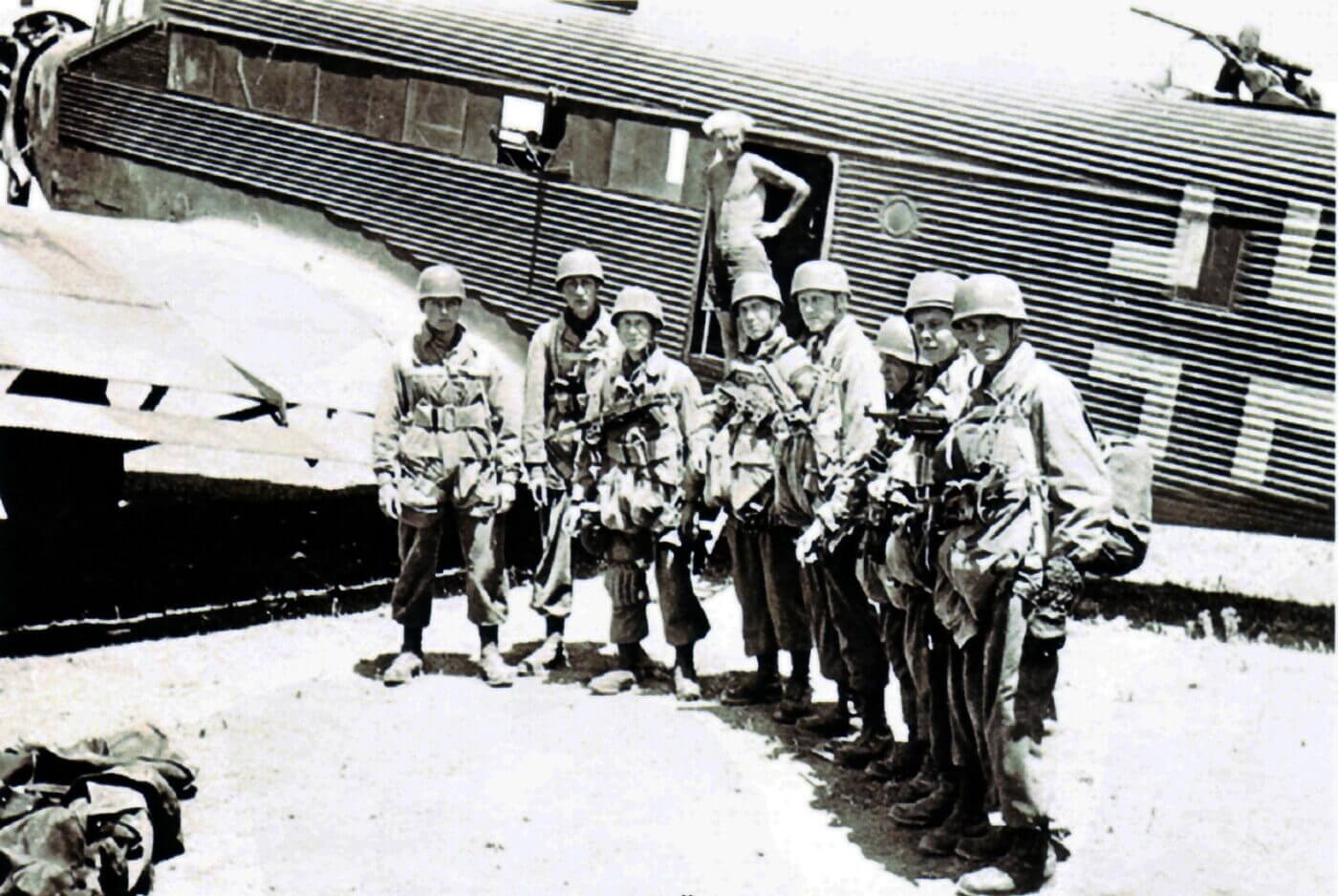