The 91 in M91/30 signifies the year that they were adopted by the Russian Empire for use, where the rifle remained on the frontline well into the Soviet Union era. In 1949, the Mosin-Nagant M91 was replaced by the SKS semi-automatic carbine, giving it a whopping 60-years on the front line officially, but they continued to pop up on battlefields for decades after that.

Now, more than a century after being developed by the Imperial Russian Army from 1882 to 1891, this internal magazine-fed military rifle is seeing resurgence in purchase orders thanks to availability from Russia and Ukraine, coupled with the need for low-cost rifles by survivalists and preppers all around the world.

Used by very famed snipers, the Mosin-Nagant 91/30 was additionally the sniper rifle most employed by female snipers.

Not to forget even german snipers in WW2 made good use of that rifle.

Below are some shots of an M91/30 PU sniper rifle. There were several sniper variants of the Mosin Nagant. In chronological order, they were the PE, PEM and PU. Introduced in 1942, the PU was by far the most produced sniper variant. It's also the simplest, and is a very rugged sniper platform. 91/30s by themselves are pretty much indestructible, but the PU scope can take a beating before it becomes unusable too.

This particular rifle was made at the Izhevsk arsenal in 1944. There were two arsenals that produced PUs, the other being Tula. The way to tell which arsenal made the rifle is by looking at the markings, as each arsenal had a different stamp. The wartime Izhevsk rifles will have a hammer and sickle surrounded by laurels at the top of the barrel shank and their arsenal marking, which is an arrow inside of a triangle, lower down on the shank. You'll be able to see them in the pictures below. Tula marked their rifles with an arrow inside of a large star during the war.

All parts on this rifle are Izhevsk stamped, all the way down to the cleaning rod. All numbered parts match, with none appearing to be force matched (collector's term for parts that have one serial number ground or lined out and another replacing it. This usually happened when rifles were overhauled during their service life). The scope is a standard PU fixed 3.5X Progress scope, but it is not original to the rifle. The original scope was replaced when the rifle was overhauled sometime during the cold war. PU rifles had their scope numbers stamped into the side of the barrel shank so that they stayed together. This one still has the original scope number, but it is lined out with the current scope number stamped above it. The stock is a late war stock with the proper acceptance stamps and markings.

Here you can see the factory markings; the hammer and sickle along with the Izhevsk triangle and arrow. Also shown is the year of manufacture and serial number. Note the scope numbers on the side of the barrel shank. The original number is lined out and the new number is stamped above it. The other number you can see on the receiver (the one starting with MOR) is not original to the rifle. It had to be added to comply with US import laws. Close up of the base, mount and scope. One of the features of the PU is that the scope/mount are easily detached from the base. The front part of the mount and base have a ball and socket joint. The rear part of the mount is secured to the base by two rough elevation screws and the large thumb screw. All you have to do to take the mount off is to loosen the thumb screw, loosen the top elevation screw and pull it off. The laser etched markings at the rear of the receiver are obviously not original. They have to be there per US import laws. The right side of the action. The PU is a great rifle to shoot, and it's easy to see why it was esteemed by those who used it. It's built like a tractor, rugged and simple to use. Trigger pull is smooth. Zeroing is a pretty straightforward process. It's very accurate as well. Much more accurate than I am, that's for sure. The only thing that can make shooting it a little awkward has to do with the fact the scope is mounted pretty high above the action. This makes getting a good cheek weld with the stock a little harder. You end up getting more of a jaw weld.

To add to Sempai's fact about the PU getting put to use by the Germans as well, here's a pic of a soldat who appears quite pleased to have a PU in his hands (third from right). Looks like they all have 'em except the para!

The magazines of the rifles in the picture look larger. Is it the same rifle with just a larger magazine of a diferent rifle?

Cleaning and / or renewal of lost images.

Looking through the scope of a captured Mosin-Nagant, 1941. 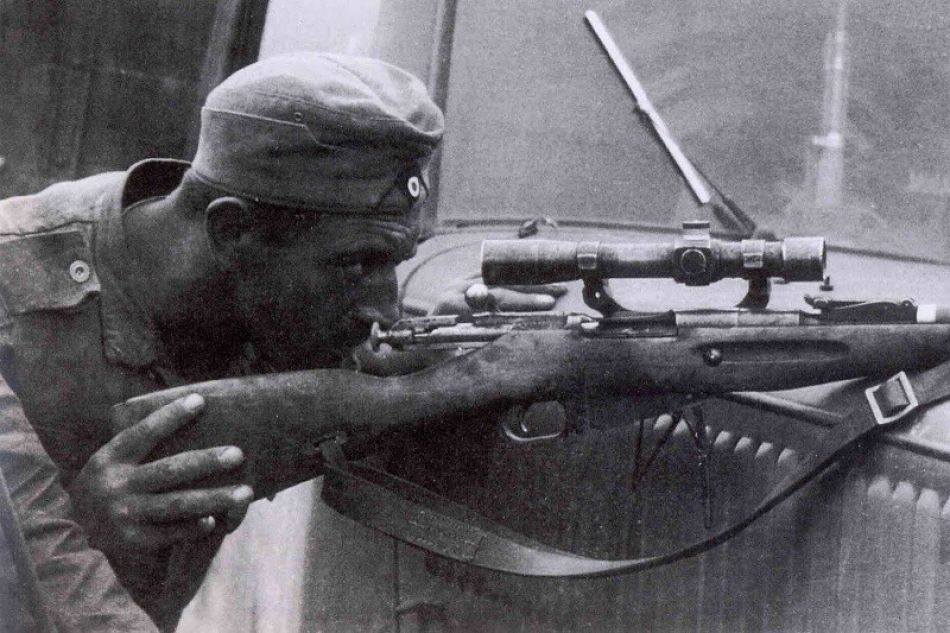