Saying goodbye to her husband this Polish female stuffs something into his bag before he heads for the front. September 1939.

Pilot Kazimierz Chomacki after a training prang in England

In 1939, the Polish army still maintained many cavalry squadrons, which had served them well as recently as the Polish-Soviet War in 1921. A myth emerged about the Polish cavalry leading desperate charges against the tanks of the invading Nazis, pitting horsemen against armored vehicles. While cavalry units did encounter armored divisions on occasion, their targets were ground infantry, and their charges were often effective. Nazi and Soviet propaganda helped fuel the myth of the noble-yet-backward Polish cavalry. This photo is of a Polish cavalry squadron on maneuvers somewhere in Poland, on April 29, 1939.

A newly-constructed wall partitions the central part of Warsaw, Poland, seen on December 20, 1940. It is part of red brick and gray stone walls built 12 to 15 feet high by the Nazis as a ghetto - a pen for Warsaw's approximately 500,000 Jews. 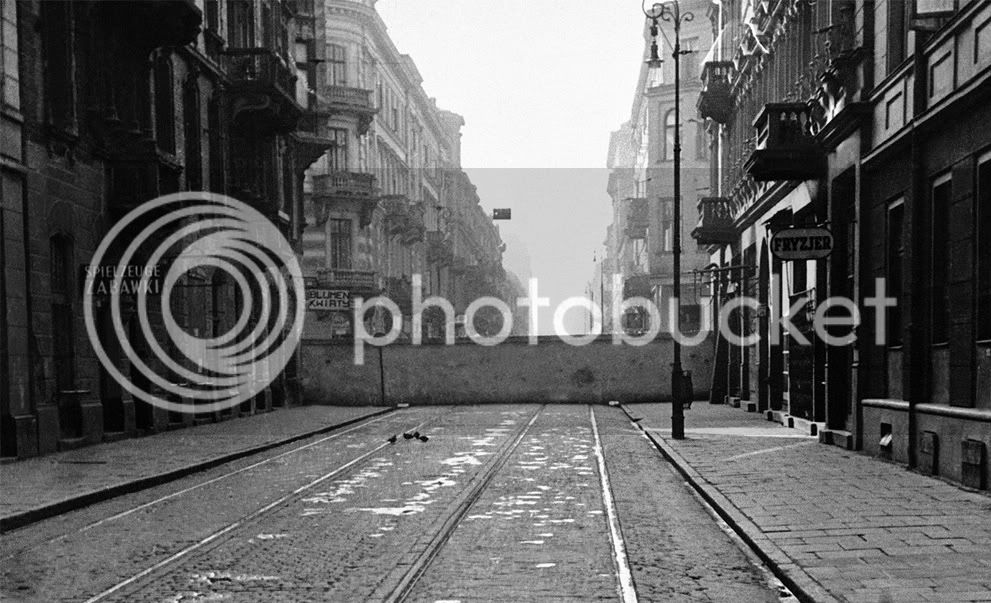 A German Army officer lecturers children in a ghetto in Lublin, German-occupied Poland, on December 1940, telling them "Don't forget to wash every day."

A group of young Jewish resistance fighters are being held under arrest by German SS soldiers in April/May 1943, during the destruction of the Warsaw Ghetto by German troops after an uprising in the Jewish quarter.

Steel-helmeted, uniformed Polish women march through the streets of Warsaw to aid in defense of their capital after German troops had started their invasion of Poland, on September 16, 1939. Members of the 1st Polish Army to the PCA in the tram with the words "Only for Germans" on the outskirts of Warsaw.