The Road to Cheren

The road to Cheren is our new game covering the Eritrea campaign in East Africa in 1941. The campaign featured British and French forces versus the Italians in a wild and mountainous country. The game was designed by Kim Kanger who also designed Ici, c’est la France, Tonkin, and the soon to be released Dien Bien Phu, all by Legion Wargames. 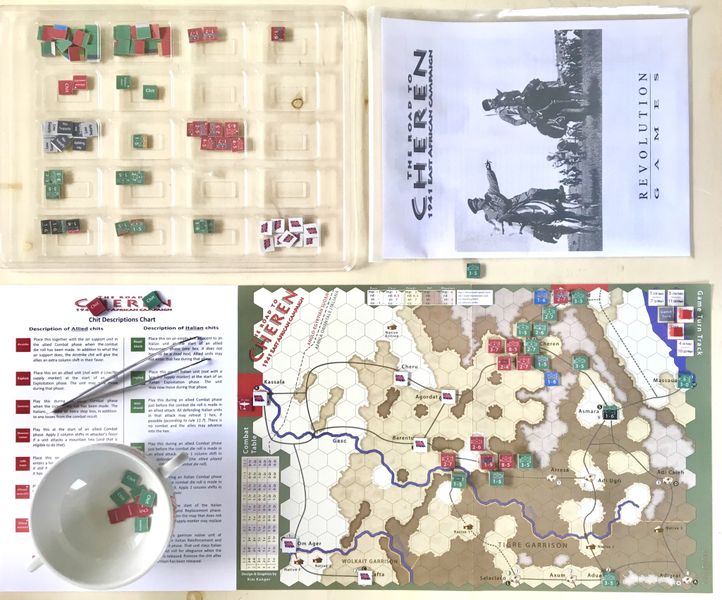 Cheren is a game where the movement of each piece is critical. After movement your opponent may react but with only a few units, making player decisions difficult; do I go to the aid of a unit likely to be attacked or use my reaction to push troops forward in an area where I am on the offensive. After combat there is exploitation movement. Only motorized infantry, tanks and cavalry may exploit and are scarce in this campaign. In addition there is a very nice chit pull system to give both sides some special abilities and keep the enemy guessing as to what comes next. Finally some Italian native units may decide to join the Allies, or they may stay loyal, which creates extra tension in the game. 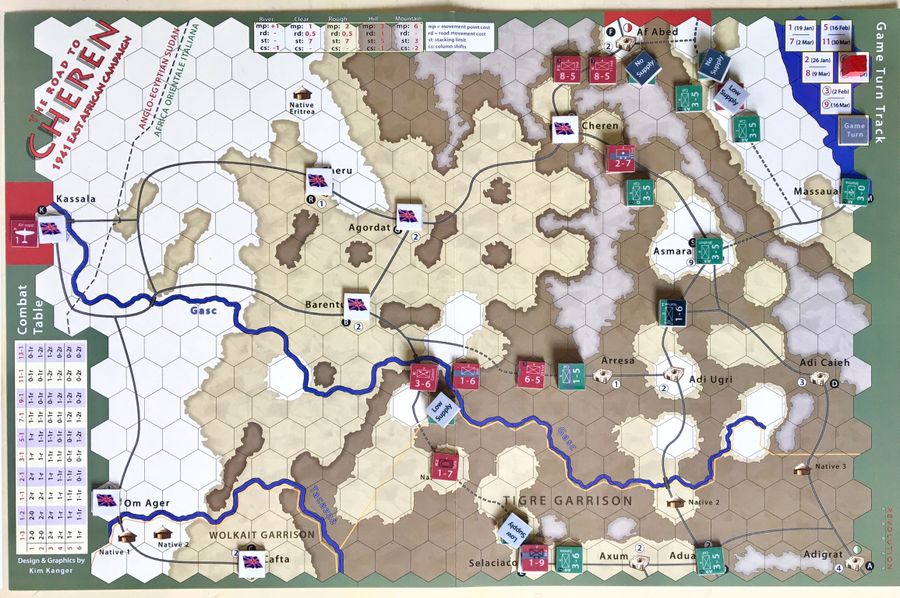 (Review from Steve Carey from Board Game Geek)

The sequence-of-play is short with just 6 phases, and includes both a limited enemy reaction phase and a friendly exploitation phase. This results in fluid and chaotic movements as the on-map situation develops. There is a special rule which provides a 50/50 chance for native Italian units (these are weak but pesky 1-6's) to switch sides to the Allies when activated; this causes some welcome uncertainty, as do the aforementioned randomly drawn action chits (most of which are recycled, removed after a single use, or are eventually discarded when drawn by your opponent).

One thing I quickly noticed was that the Combat Results Table is the most defender retreat-oriented one that I have ever seen! Even at 1-3 odds, the attacker has a 2/3 chance of inflicting a retreat on the defender. Ah, but there's a twist - the defender can opt to take a step loss and hold his ground instead. Still, if the attacker rolls a '5' or a '6', then he has the option to "Push" (i.e., take an additional step loss) and force yet another retreat result upon the defender. This is a clever way to show escalating (i.e., more bloody) engagements without a lot of rules overhead.

This is East Africa after all, so relatively simple supply rules are also laid out. Units may first become low on supply, then they are rendered out-of-supply with accompanying penalties being very harsh indeed (as expected). Towns (which affect victory) can switch sides if isolated and if also able to trace supply for the enemy. Cutting supply lines is thus certainly a valid tactic in the game.

The Allies have several routes to consider for their invasion, which should help with replayability. The Italians are mostly on the defensive and initially they have only a thin wall to impede the enemy advance, though reinforcements will soon appear to fill the line. The Allies are on a strict timetable, with victory being judged at the end of 12 turns determined by how many captured town points that the Allies have earned.

Terrain plays a vital role as both sides maneuver and joust, with the road network being especially important for both movement and supply. The Italians will want to anchor themselves on hills as often as possible for the defensive column shift as they balance their casualties versus time and space.

Play Example: to give a better feel for play, here's one memorable mid-game moment - the Allies assaulted a strongly held, key Italian hilltop position. First, the "Infiltrate" chit was played which allowed an Indian infantry unit to pass through a hard ZOC and surround the enemy. Then the Air Support marker was played - while the 1 Combat Factor from the planes had no effect on the combat odds, it did allow the Allies to also call in an "Airstrike" (another chit) for a favorable column shift after the die roll had been made. Then the "Surrender" chit was also played to inflict an extra step loss on the Italians. So what should have been an even battle suddenly resulted in 1 Allied step loss to 3 Italian step losses, and the strong hilltop position nearly collapsed. To add insult-to-injury, the Allied replacement chit draws were all Italian chits, so they were therefore discarded (but this also left the Allies shorthanded on chits, too). Pretty darn cool.

Play time is listed at 240 minutes, and for once a publisher gives us an estimate that doesn't fall short of reality.

All-in-all, the accumulated play mechanics fit together nicely with no problems encountered. I felt that my two sessions with the game imparted some previously unknown (at least to me) insights into the obscure campaign. 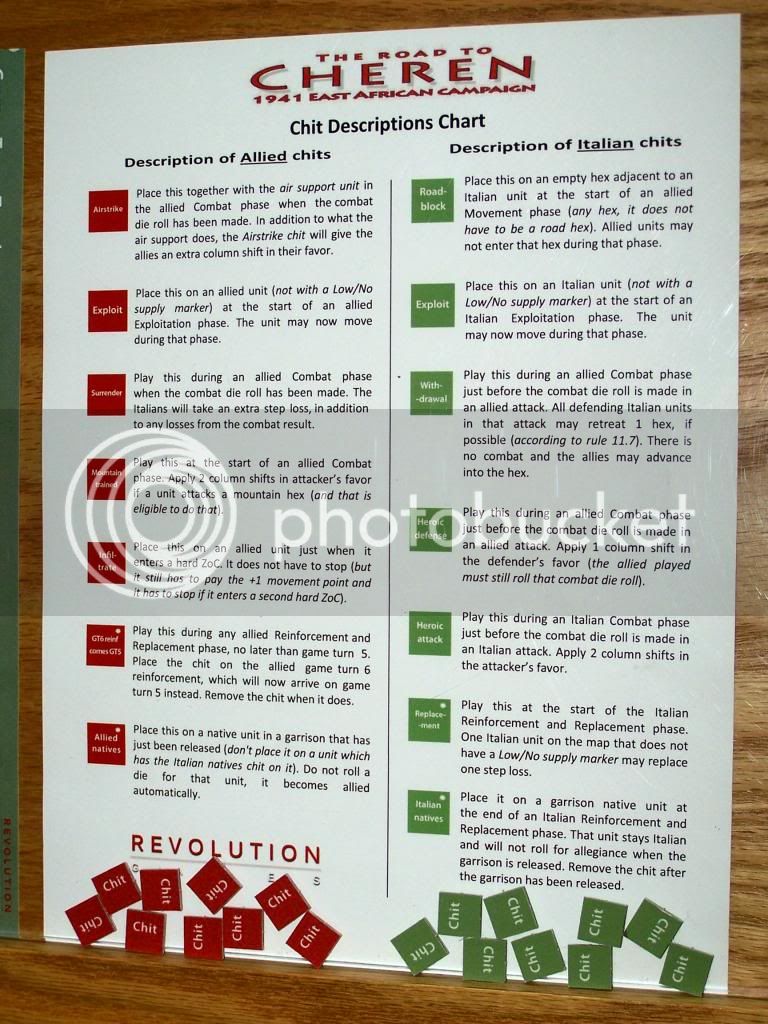 I'd rate the game above-average for solitaire play, even though each side has a 'hand' of up to 4 action chits which should normally remain hidden. When going it alone, simply play the chits face-up and make the best decisions you can for each side, keeping the chit risks in mind. With easy rules and low-unit density, the solitaire general can focus upon play and not fuss.
Last edited: Apr 23, 2021
You must log in or register to reply here.
Share:
Facebook Twitter Reddit Pinterest Tumblr WhatsApp Email Share Link
Top