Rescue with a medevac off Mutters Ridge, Quảng Trị Province.

Bootie said:
Private First Class Milton L. Cook is ready to fire his M-60 machine gun into a wooded area from which sniper fire had been received 10 miles northeast of Cu Chi, Vietnam. He is a member of the 25th infantry division. April 17, 1967

The M60 was is a 10.4 kilo, belt-fed machine gun capable of firing 600 rounds per minute at a range of 900 meters. It served as the basic infantry platoon automatic weapon and was also mounted on a number of vehicles including helicopters.

The air version was faster firing model without the hand grip and forward trigger. The forward heat guard reduced or removed. It had no tripod, a heavier buffer spring, butterfly trigger and hand grips much like the Ma Duse 50cal. Normally, they were on a pivot mount with limited travel to protect the rotors, pilots and tail.
D

The Spider said:
The air version was faster firing model without the hand grip and forward trigger. The forward heat guard reduced or removed. It had no tripod, a heavier buffer spring, butterfly trigger and hand grips much like the Ma Duse 50cal. Normally, they were on a pivot mount with limited travel to protect the rotors, pilots and tail.
Click to expand...

Brig. Gen. Robin Olds (1922/2007) -as colonel in the pic- was a WW2 II fighter ace who became an aviation legend by commanding the Air Force wing that shot down seven MIGs over North Vietnam in the biggest air battle of the Vietnam War.

Olds, who in the course of a long career flew 65 kinds of military planes, almost perfectly filled the role of hotshot flier. Piloting P-38 Lightnings and P-51 Mustangs, he shot down 12 planes during World War II. In Vietnam, he led the Eighth Tactical Fighter Wing, which scored 24 such kills, an unsurpassed total for that conflict.

In all, he downed 16 enemy aircraft in the two wars, making him a triple ace. And when he could not wrangle a combat assignment in the Korean War, he participated in transcontinental jet races and flew with the Air Force’s first aerobatic demonstration team.

But his greatest moment came on jan. 2, 1967, when, as a colonel, he created an aerial trap for enemy MIGs. Called Operation Bolo, the trap entailed use of radar-jamming devices and other tactics to make faster, more maneuverable F-4s appear to be the slower F-105s used for bombing missions. When the MIGs responded by attacking what seemed to be F-105s, the F-4s downed seven of them.

US Marine during the Tet Offensive, 1968.

Three U.S. military police behind a wall at the entrance to the U.S.A. Consulate in Saigon on the first day of the Tet Offensive, Jan 31, 1968. In the foreground, two americans fallen in combat.

Helicopter gunner with wrapped in strings of 40mm grenades.

Louis said:
Three U.S. military police behind a wall at the entrance to the U.S.A. Consulate in Saigon on the first day of the Tet Offensive, Jan 31, 1968. In the foreground, two americans fallen in combat.
View attachment 13204
Click to expand...

The Tet Offensive was the motivation for my enlistment in the USMC in Feb 1968. The recruiter enlisted me in a delayed entry program, as they wanted me to complete high school. Two weeks after my graduation, June 24th 1968, I arrived at USMC Recruit Depot San Diego.
Last edited: Jul 29, 2017

A marine carries a blindfolded woman suspected of Vietcong activities over his shoulder near Da Nang, Vietnam. 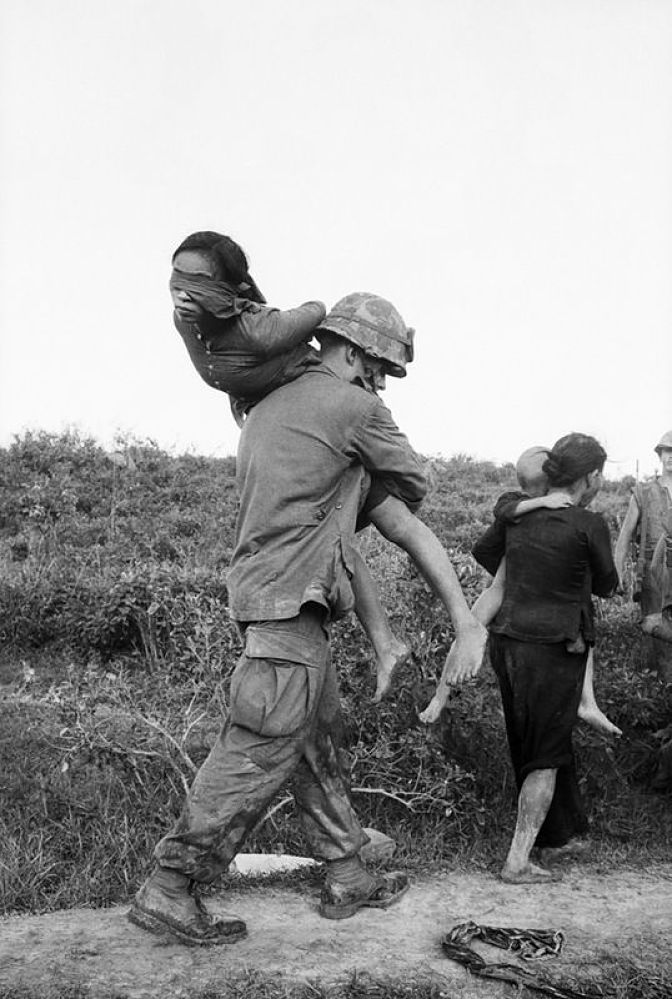 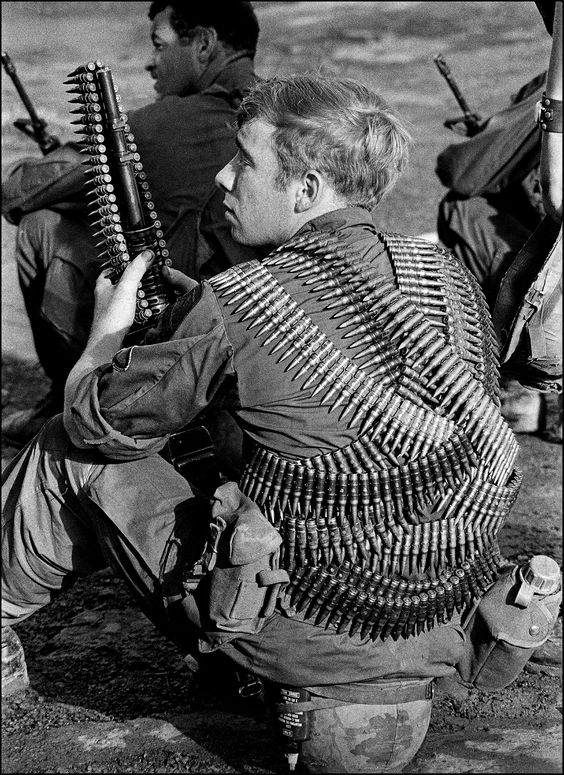 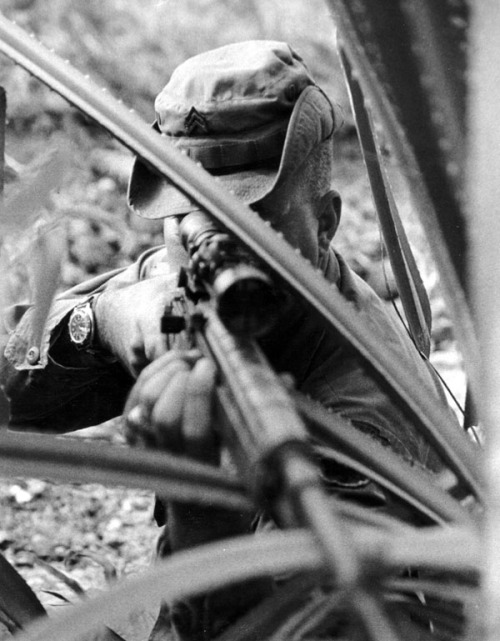 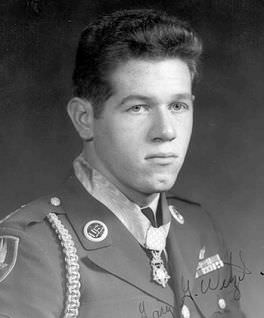 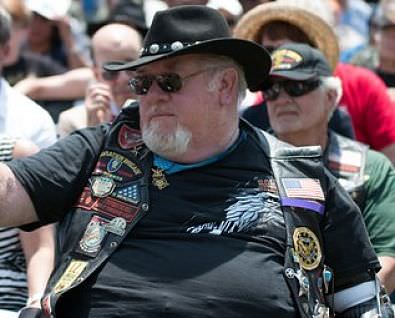 Gary George Wetzel (born 1947) is a former US Army soldier and a recipient of the Medal of Honor - for his actions in the Vietnam War January 8 1968.
Citation: Sp4c. Wetzel 173d Assault Helicopter Company distinguished himself by conspicuous gallantry and intrepidity at the risk of his life. above and beyond the call of duty. Sp4c. Wetzel was serving as door gunner aboard a helicopter which was part of an insertion force trapped in a landing zone by intense and deadly hostile fire. Sp4c. Wetzel was going to the aid of his aircraft commander when he was blown into a rice paddy and critically wounded by 2 enemy rockets that exploded just inches from his location. Although bleeding profusely due to the loss of his left arm and severe wounds in his right arm chest and left leg Sp4c. Wetzel staggered back to his original position in his gun-well and took the enemy forces under fire. His machinegun was the only weapon placing effective fire on the enemy at that time. Through a resolve that overcame the shock and intolerable pain of his injuries Sp4c. Wetzel remained at his position until he had eliminated the automatic weapons emplacement that had been inflicting heavy casualties on the American troops and preventing them from moving against this strong enemy force. Refusing to attend his own extensive wounds he attempted to return to the aid of his aircraft commander but passed out from loss of blood. Regaining consciousness he persisted in his efforts to drag himself to the aid of his fellow crewman. After an agonizing effort he came to the side of the crew chief who was attempting to drag the wounded aircraft commander to the safety of a nearby dike. Unswerving in his devotion to his fellow man Sp4c. Wetzel assisted his crew chief even though he lost consciousness once again during this action. Sp4c. Wetzel displayed extraordinary heroism in his efforts to aid his fellow crewmen. His gallant actions were in keeping with the highest traditions of the U.S. Army and reflect great credit upon himself and the Armed Forces of his country.

Calling for artillery support as his buddies are pinned down by Viet Cong fire; March, 1966. 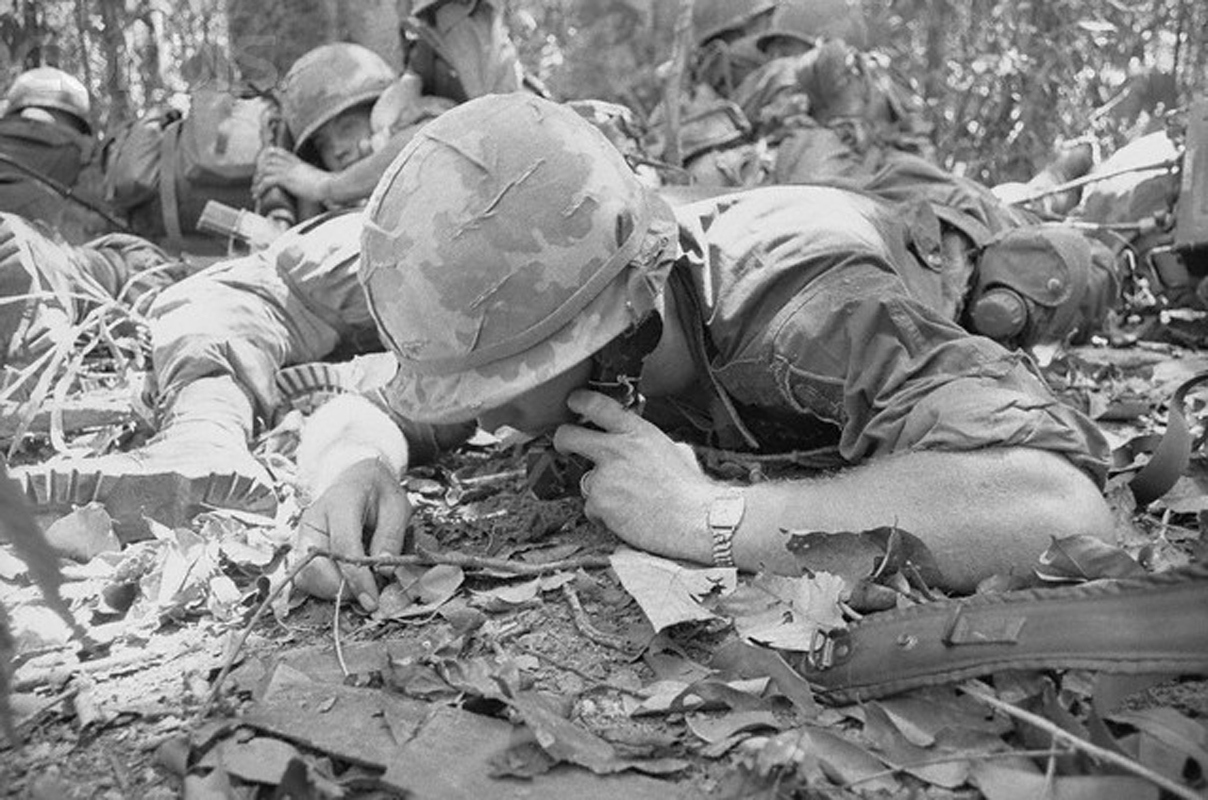