Aliens... Another Glorious Day in the Corps. 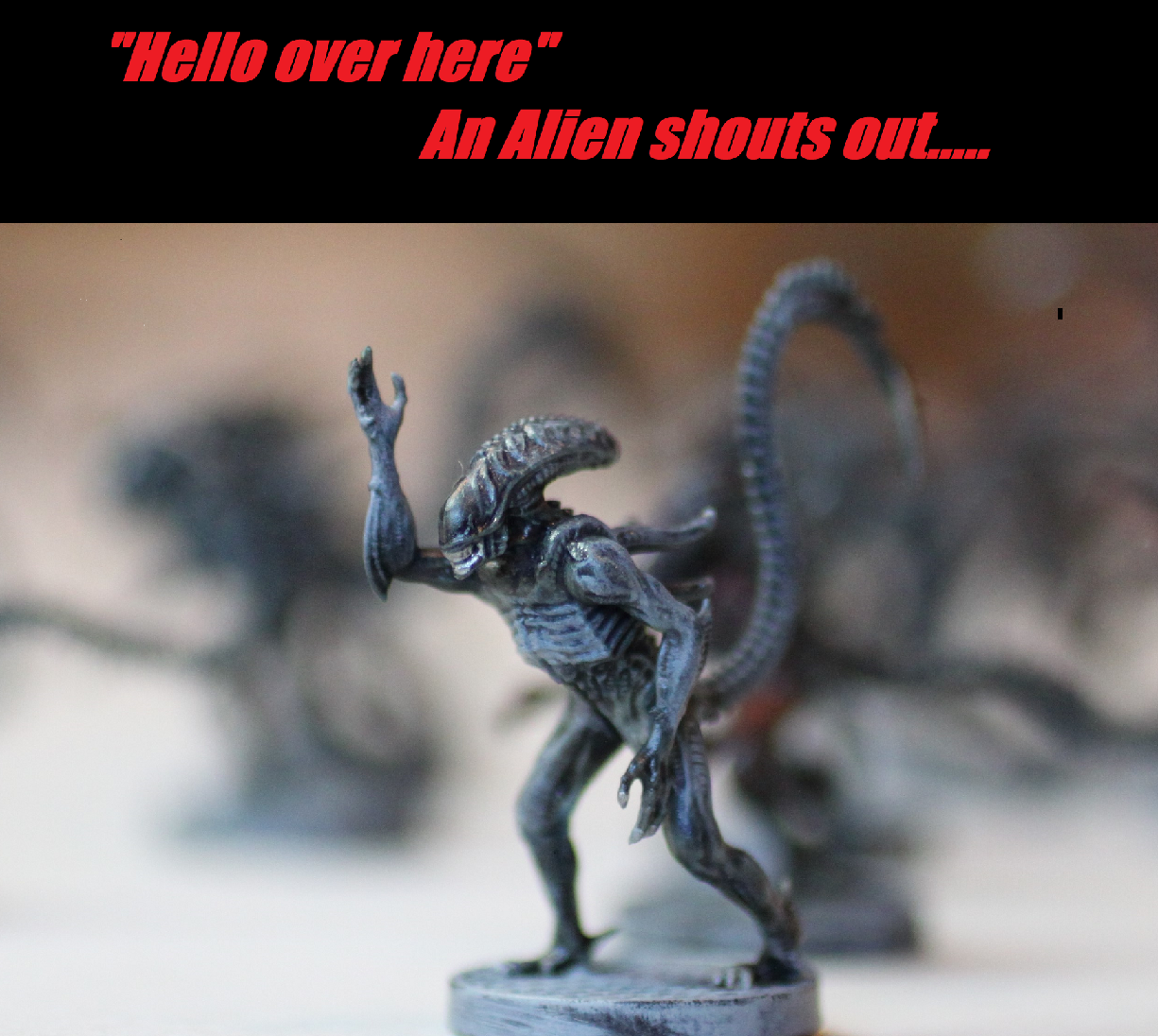 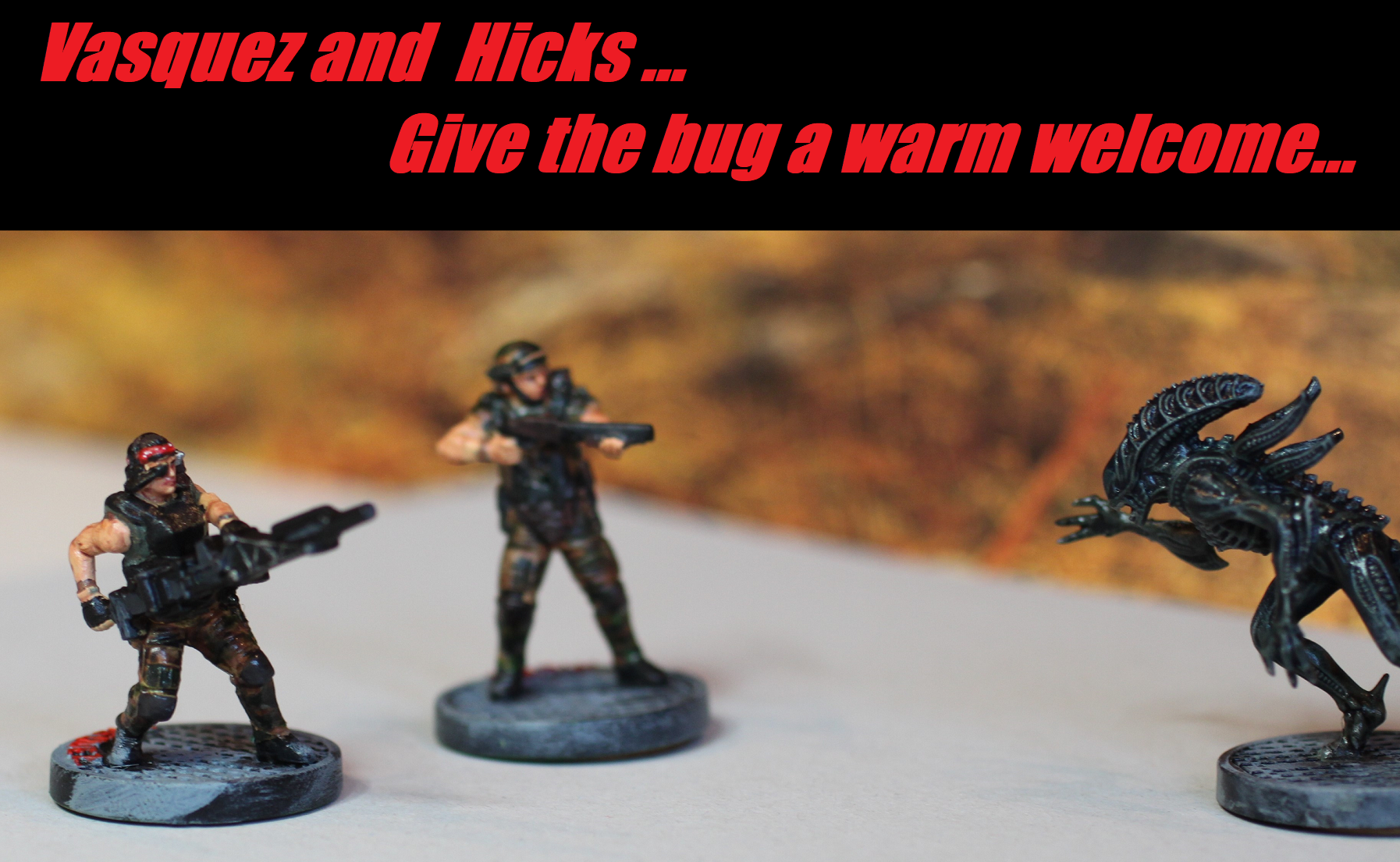 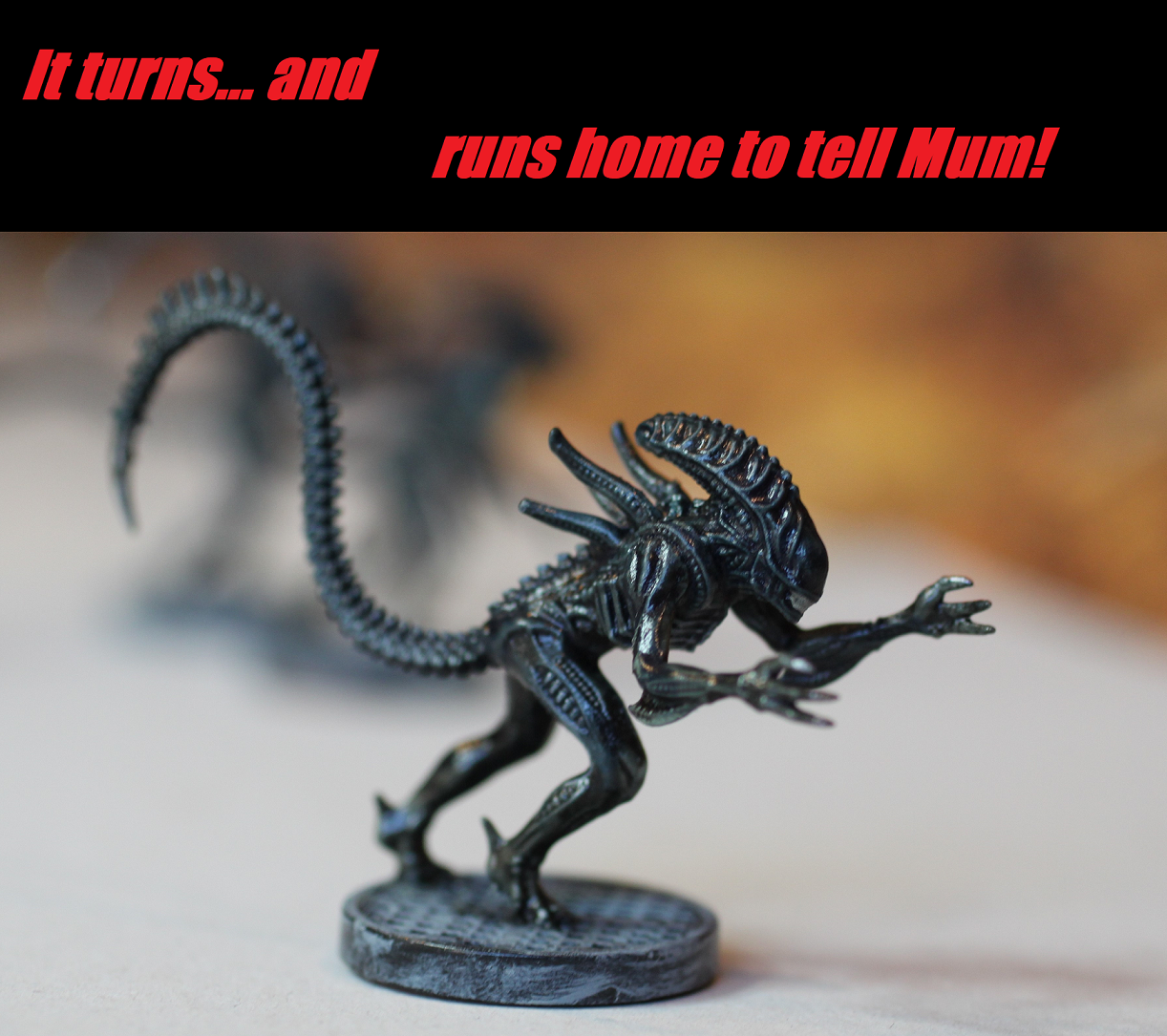 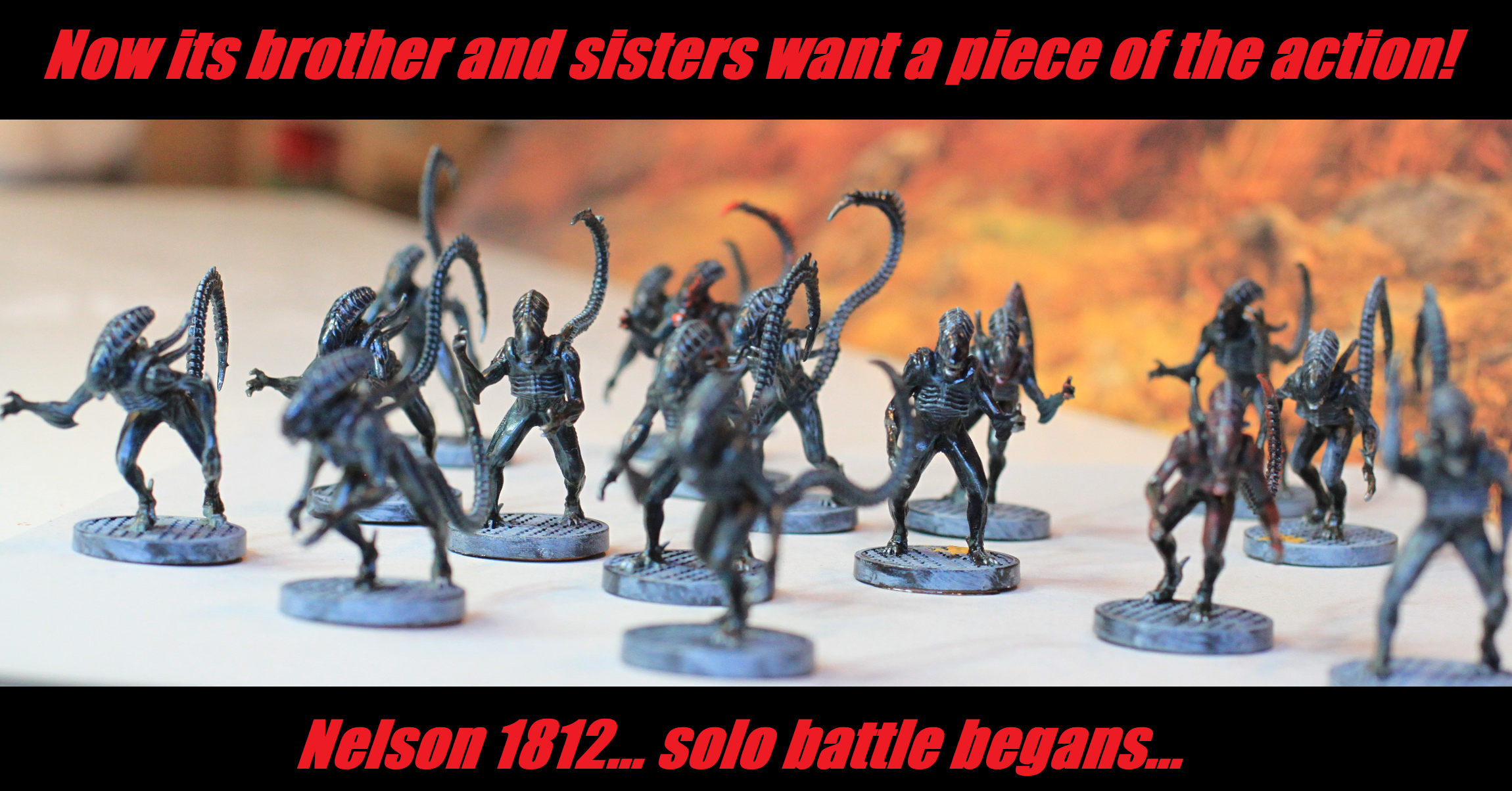 So what are the abilities of Newt? I assume just being able to Hide?

Well' popped all the pieces out... being very careful!
Board and all the pieces came out fine... every thing looks good.
Getting ready to play the first mission (1 of 3).
In addition to the missions there are 3 extra missions. 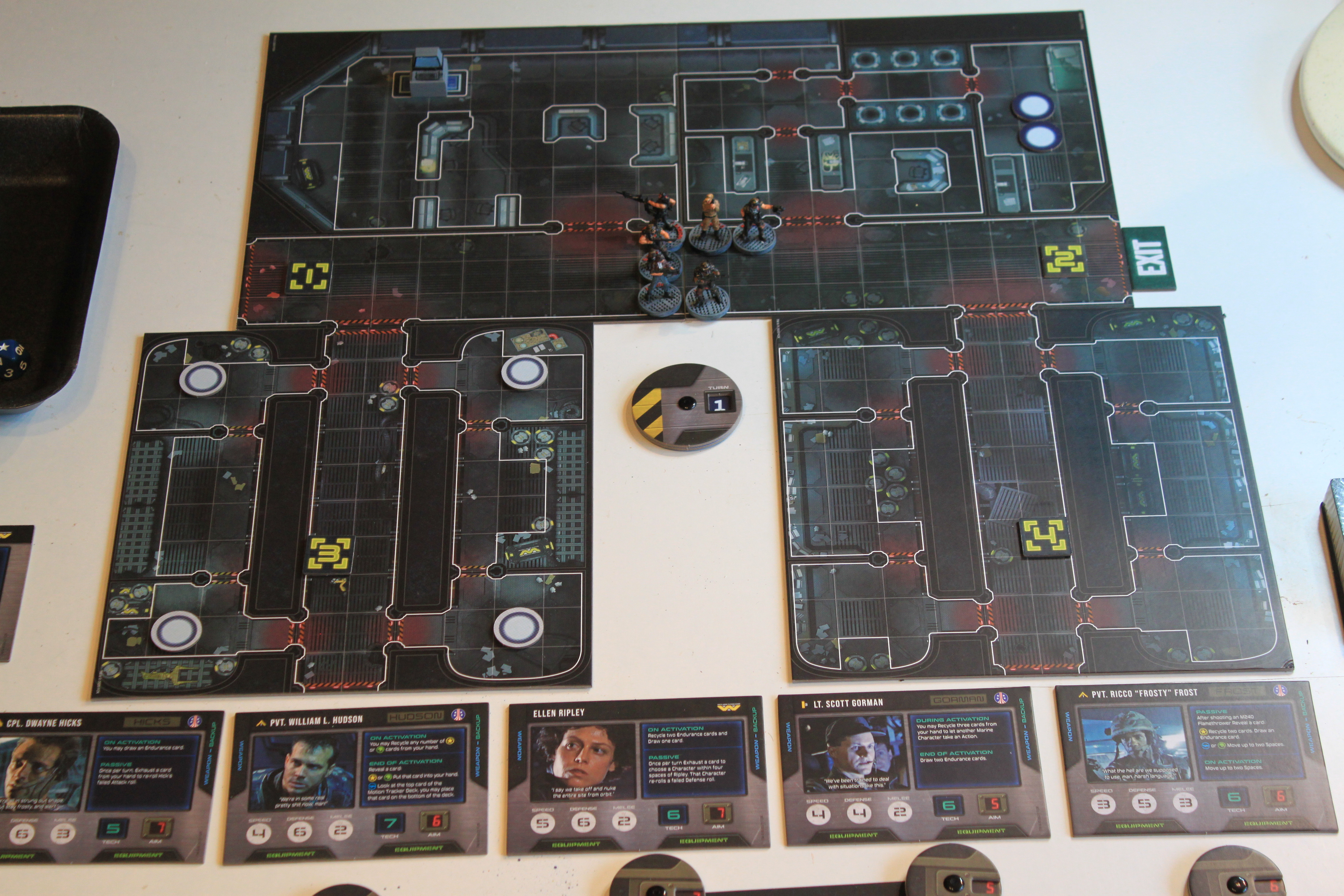 The first mission is to find and rescue Newt. 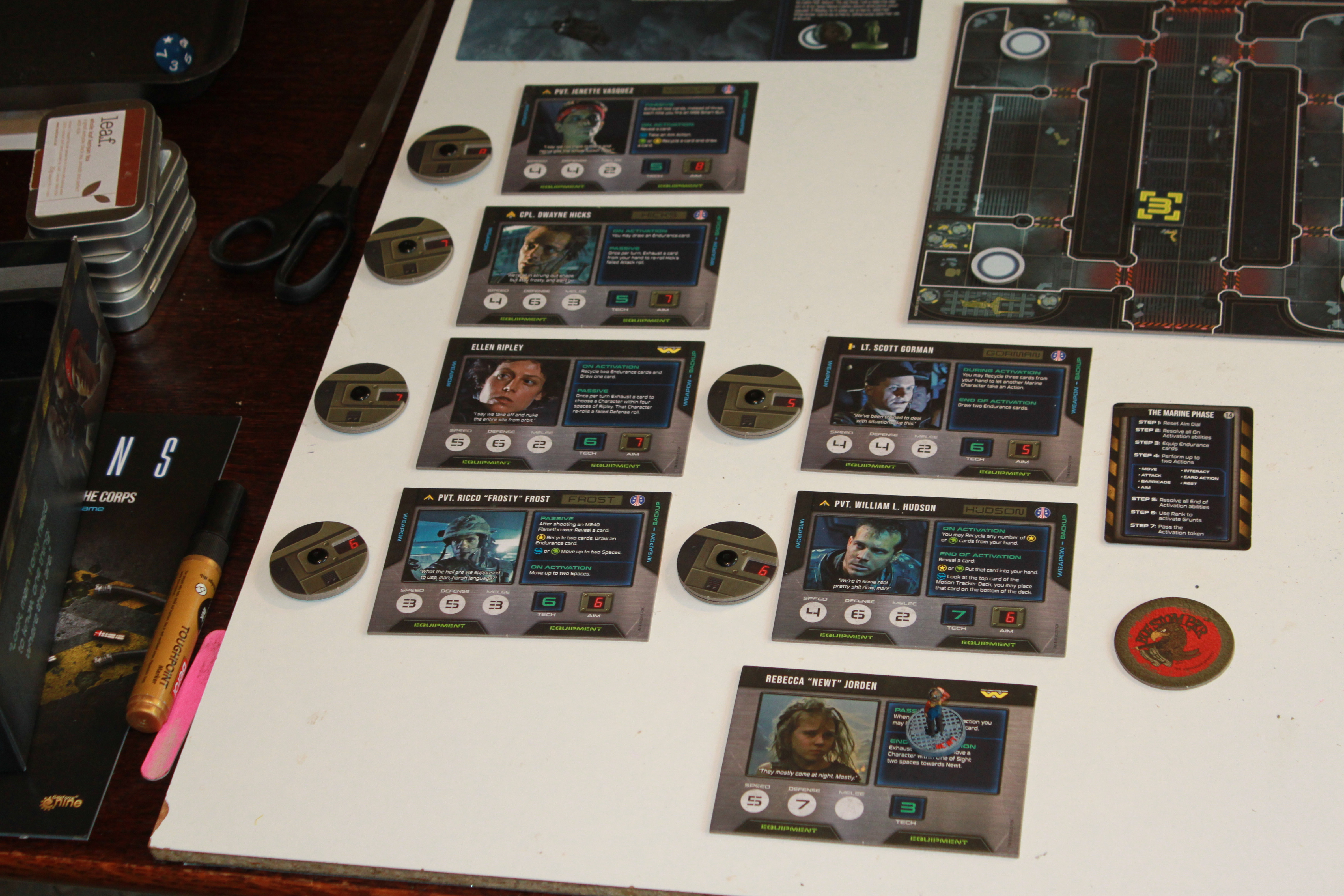 Tried to get one photo of everything... ended up breaking it into three!
The cards are hero side up (played by a human.) The other side is the grunt side when not played, but can controlled by players. 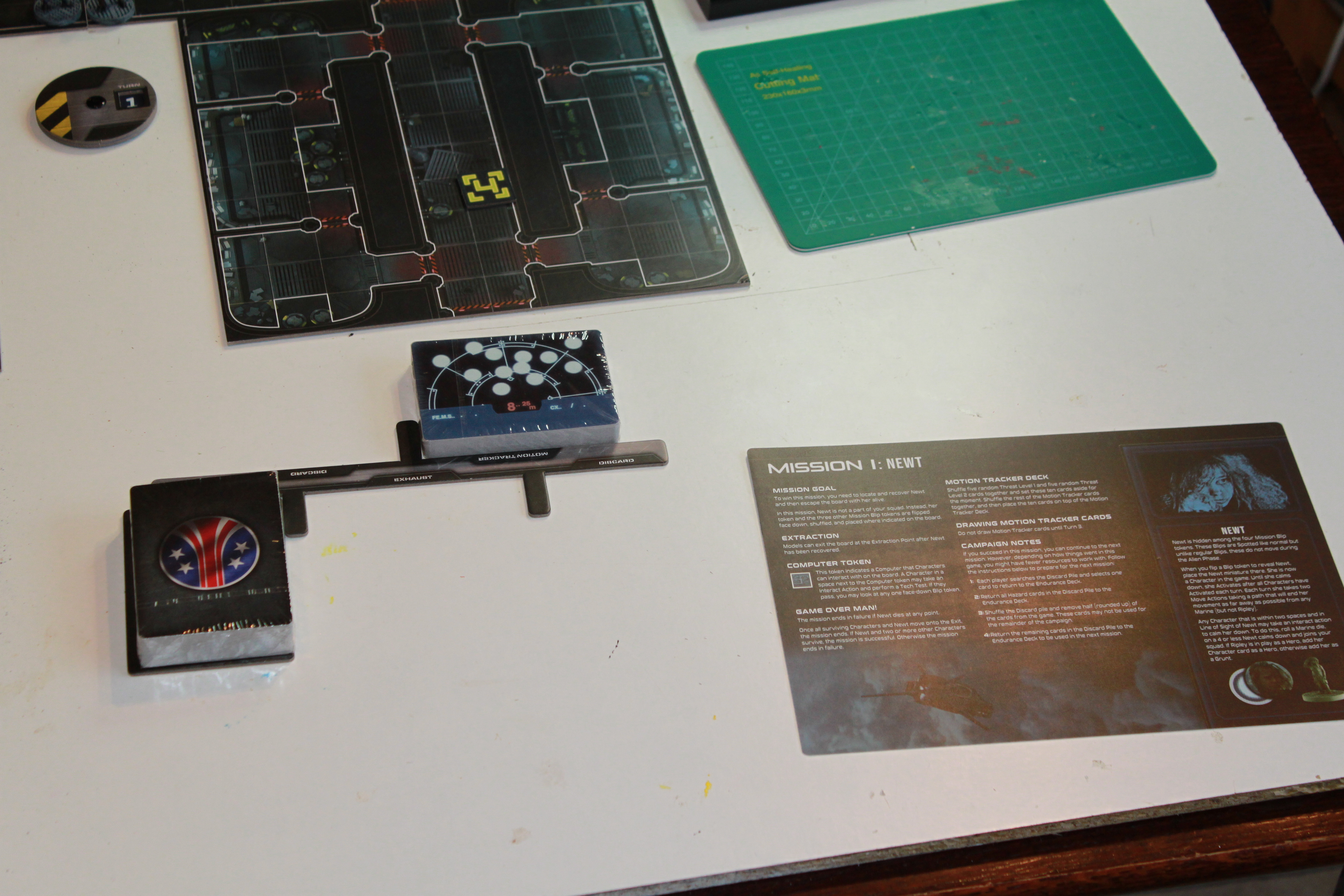 @Gnarly Newt in the first mission is only available as a grunt... she needs to be rescued.
As a player her values are Speed 5 (4), No Melee value, defense 7 (5), Tech 3 (2)
Grunt values in brackets.

Not sure what this all means yet... so time to dive into the Rulebook, and make a start.

Wish I have gone to there homesite first... it would have really help with the painting of the figures. 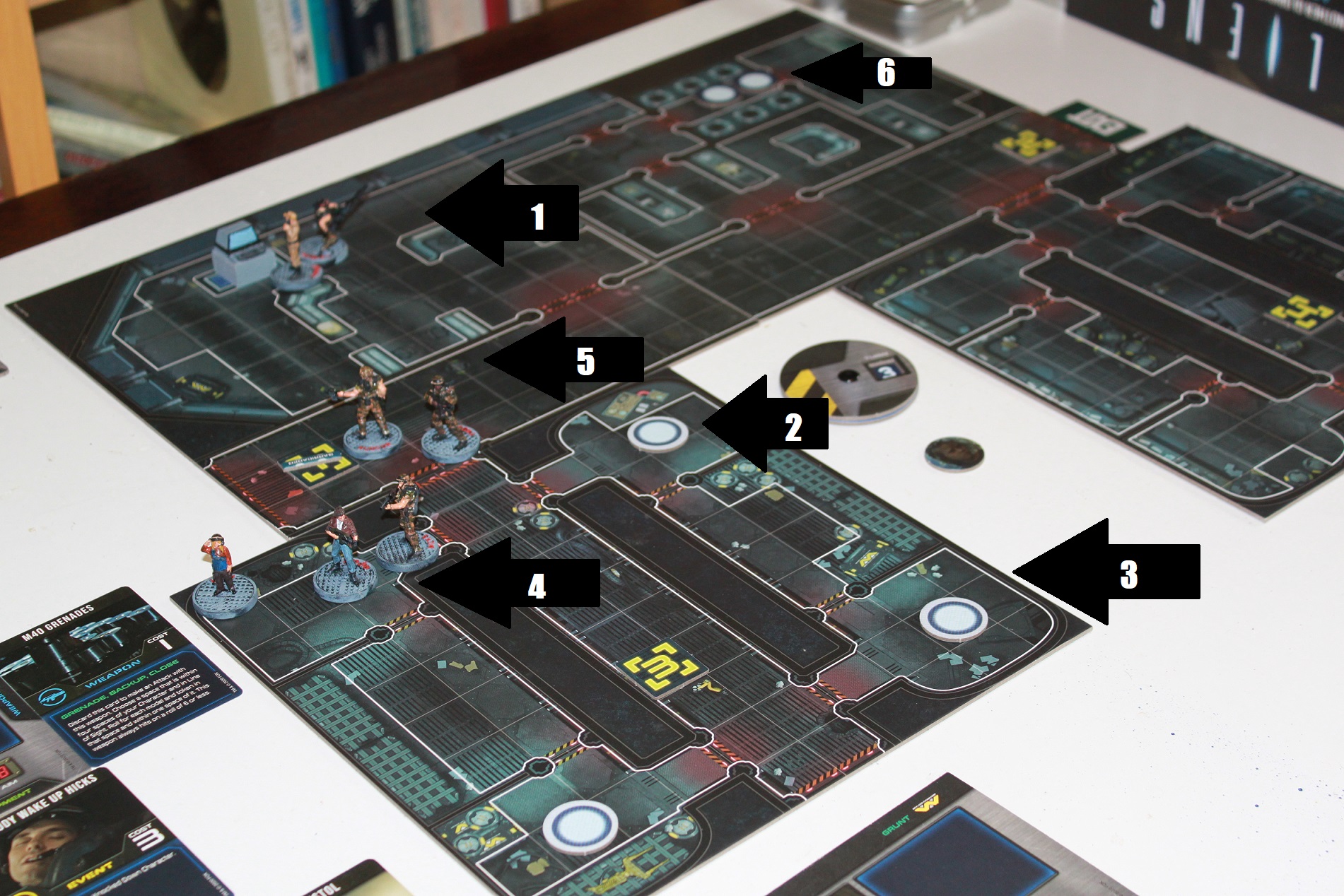 Saturday prior to Starting the game, realized I had not yet watched Aliens recently…

So off I went to watched Aliens. My son had purchased the Blu-ray boxset for me a few years back this also included the 1991 special edition.

Despite its age (1986), really enjoyed the show… think present day film directors may have now lost the art of making good films with riveting stories, that we took for granted in the 70’s and 80’s.

On with the Mission

In a nutshell… save Newt and escape.


In the area, that I will call terminal three (the yellow marker 3, being a square, the aliens can spawn.) are four blips (Arrow 3+2 pointing to blips). Three of these blips are aliens the fourth, Newt.

In the first two moves Gorman and Vasques (Arrow 1) made for the computer terminal. Their first attempts using the terminal failed to locate Newt. However, it did reveal an alien (arrow 2).


Being advised that there was an Alien in the right-hand room, Hicks and Ripley enter the room to the left… spot Newt but are unable to catch her. Fortunately, she is cornered (arrow 4).

(Arrow 5) Hudson covered by Frost barricades the entry area 4 to hold up alien access… as on the end of turn 3 the motion cards come into play.

Meanwhile, (Arrow 6) the two alien blips continue to move towards the nearest contacts. Fortunately, their movement throws have been 1’s+2’s!
Last edited: Jan 12, 2021

So you already knew that Newt was in the vicinity of Yellow 3 marker at mission outset? What is the purpose of the other Yellow markers (1, 2 & 4)?

@Gnarly May have misled you a little. If you go to the top set-up picture, your see four blip like pictures in that game card (map).
Newt is under one of these blips. (These were shuffled at the beginning of the game.)
That area I call yellow three for ease.
The yellow three marker is an alien spawn point. all the yellow markers are spawn points, numbered 1 to 4.
At the time of typing I could not remember the term for these yellow squares hence the long description ie
(the yellow marker 3, being a square, the aliens can access the area.) Will amend that now! 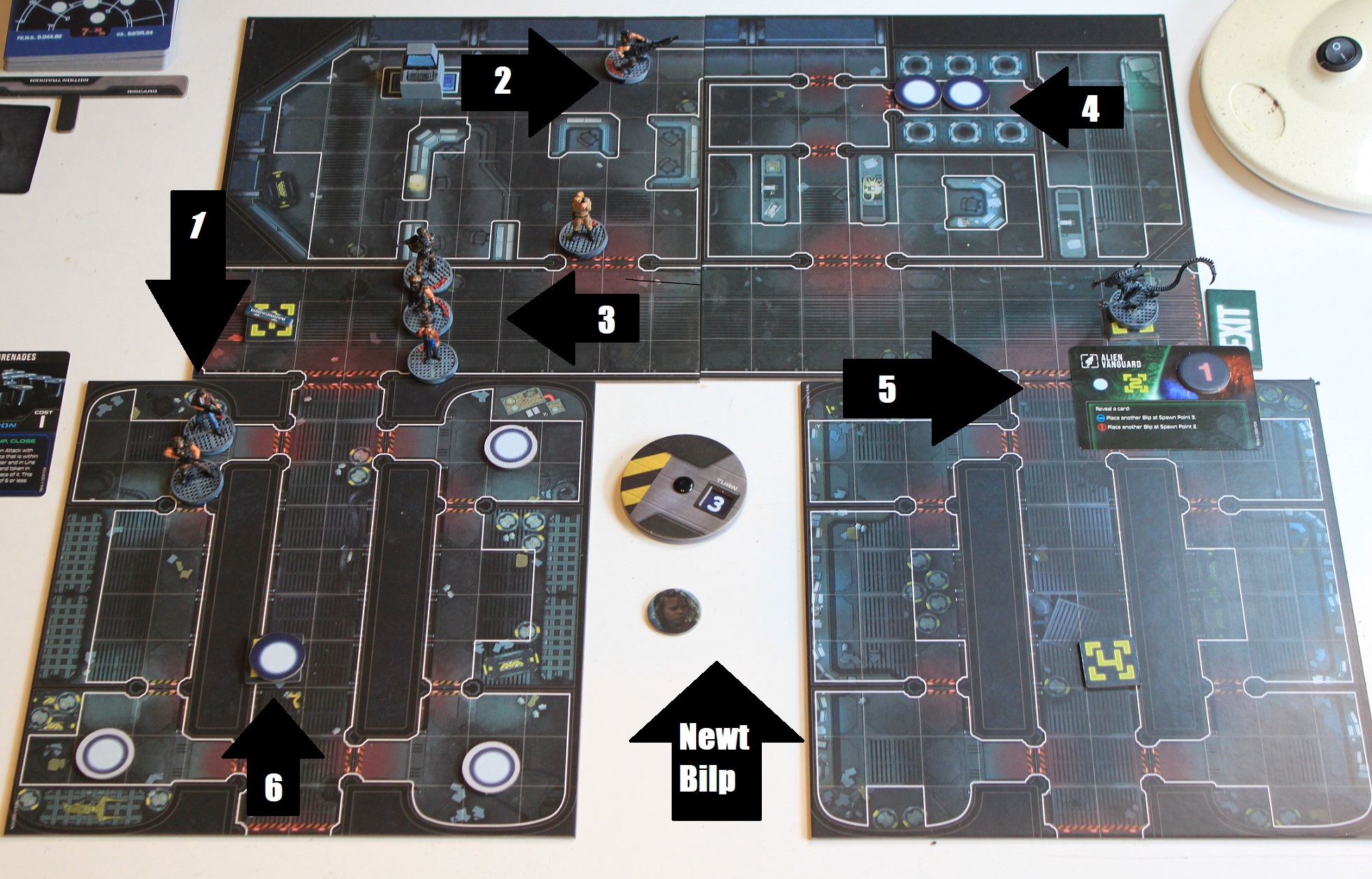 (Arrow 1)
Hicks moves closer to Newt, while at the same time covering the door into the unexplored room. He attempts to calm Newt, but fails.
Ripley tries to calm Newt and succeeds on her 2nd attempt. Newt moves into the main hall.

(Arrow 2)
Vasquez moves to cover the entrances as Gorman heads towards the main hall.

(Arrow 3)
Frost and Hicks move back, then aim at the possible entrances the alien might spawn. 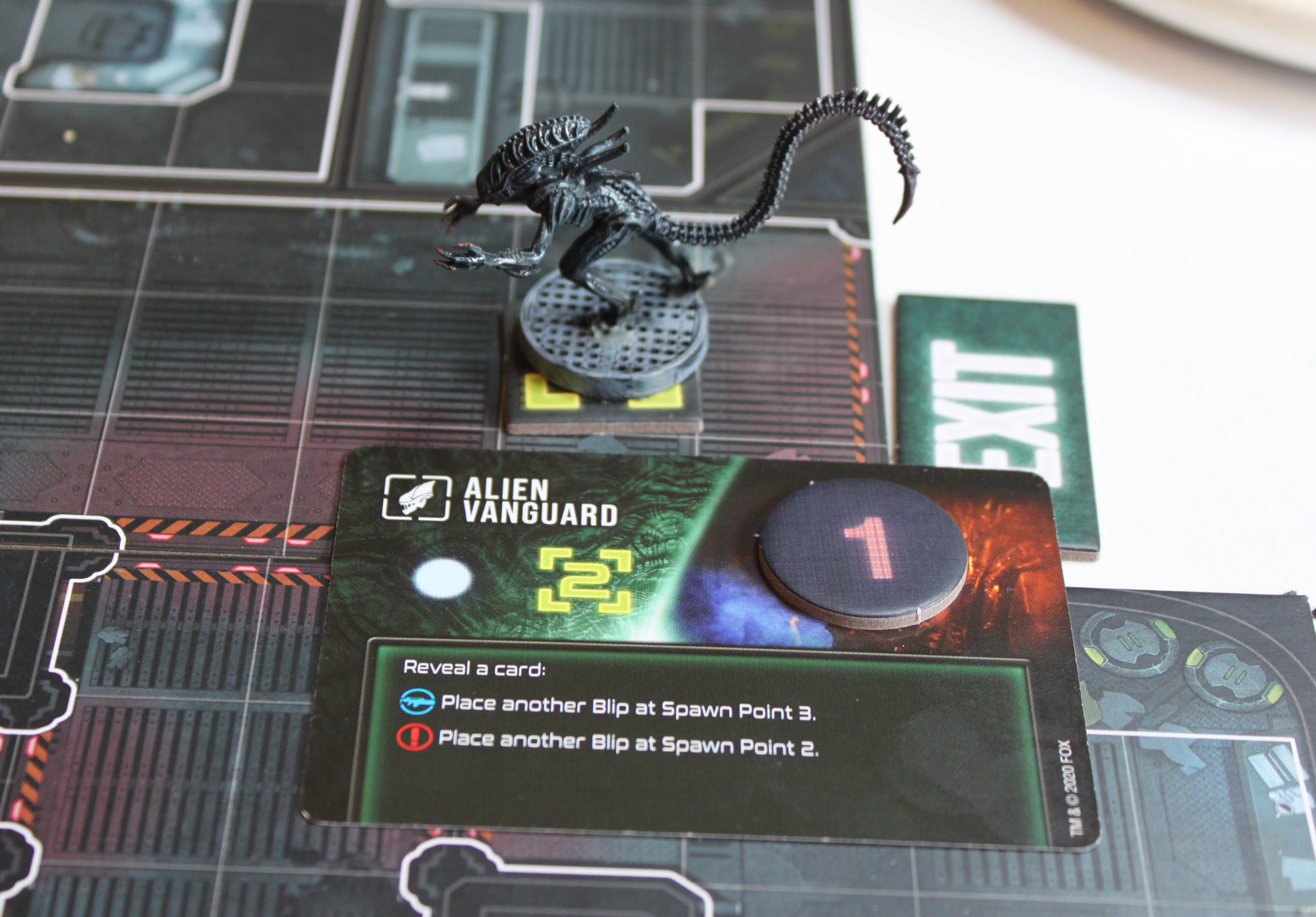 That's the end of the moves for the marines...

However the motion cards come into play, at the end of turn three!

Pick up my first four cards... three of them are false Alarm cards... yippie!
The other is an alien Vanguard card... that places a blip at spawn point two. (arrow 5)
On revealing a weapons card from the pack another alien blip is placed at spawn point 3 (arrow 6)

The alien blip at spawn point 2 is visible to Frost, Hudson and Newt.
On turning the blip over it reveals 1... one alien is placed on the board. (See above.)
Last edited: Jan 12, 2021

Would you believe I missed out on a copy last night on the Aussue FB group for $AUD60 in shrink!!!! Gah!!!

Australian Dollars..., and Brand New Still in Shrinkwrap (as opposed to opened and played).

I saw a review of this game last week, looks awesome. I believe there is additional expansions and what-not.
Board Game Geek members have made missions I think.

Did you paint the pieces?

I think he did, as I understand they have to be glued together.

Nathangun said:
I think he did, as I understand they have to be glued together.
Click to expand...


Wish I have gone to there homesite first... it would have really help with the painting of the figures.
Click to expand...

@sspoom
Yep, you have to put them together the pieces. The marines put together easily, and are in a bright green plastic.
The aliens have four identical spruces, four aliens with different poses on each one. However there are two heads per alien, these heads fit one body.
So be careful not to put the wrong head on the wrong body... look for the codes on the spruces. The tails are fiddle to connect.
These come in black.

I painted these, then put three coats of vanish... 2 Gloss, then one matt for the marines. 2 coats of gloss, and then a further dry wash
to bring out the features for the aliens. (Three vanish coats as they will be game pieces played with by my adult children!)

I pre-ordered the basket, that also included Ultimate Bad Asses, Get away from Her you Bxxxd!, and Assets and Hazards (Bonus for basket purchase).
Painted them quickly to play on New Year's Day. Regrettably we went into lock down.

So, still have more painting to do.

In the pictures your note a computer... that is one of the assets. In the game its represented as a card token.

Sorry for the slow response, been very busy last few days looking after grandchildren in the family bubble!

Years ago, I had a game similar looking to this featuring “Gene-stealers” and “Space Marines” my sons and I painted the pieces, it was fun. “Space Hulk” was the name of the game as I recall 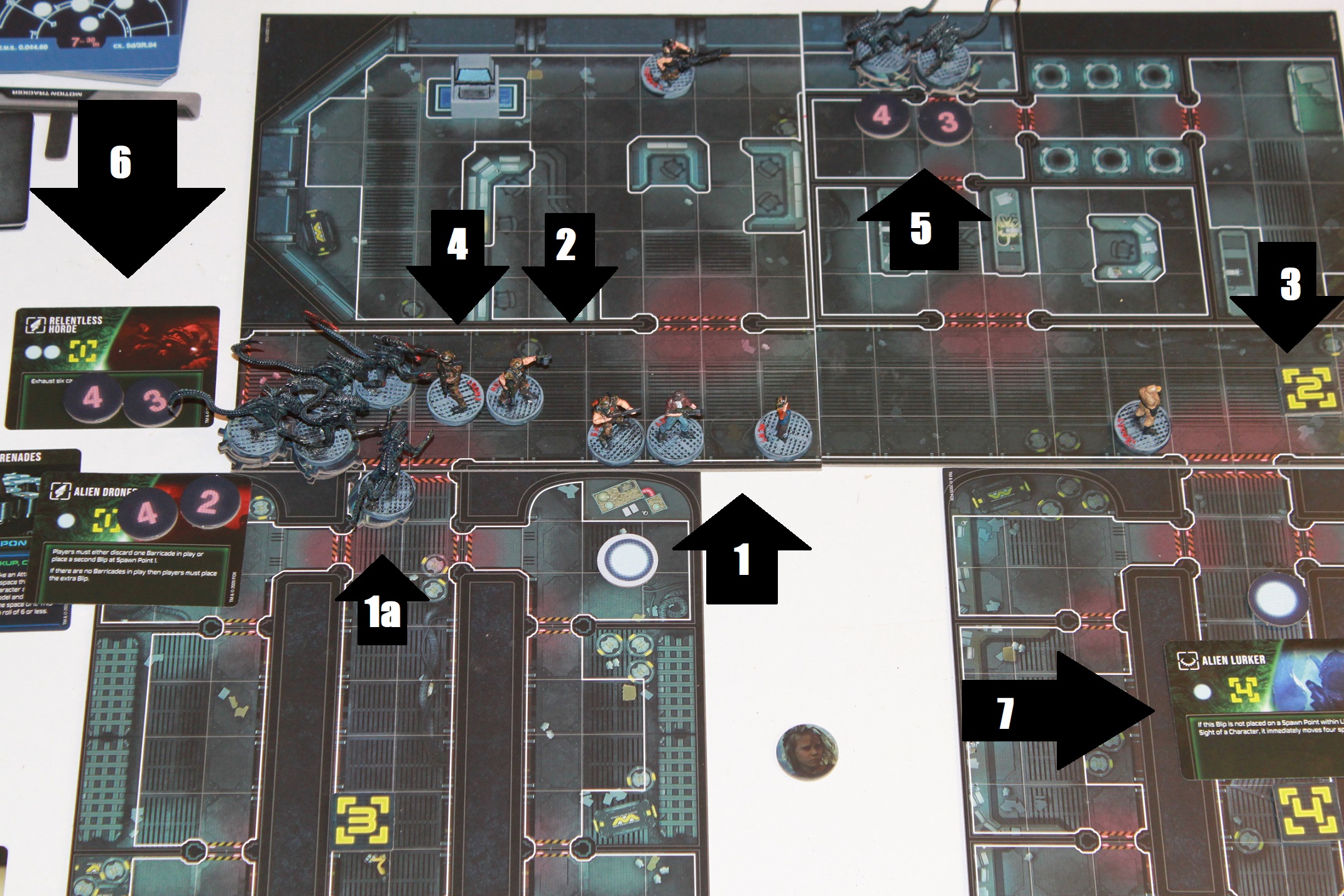 (Arrow 1) Hicks makes for the main hall, in doing so spotted the aliens on spawn point 3. On turning the blip over it shows there are three aliens.(see1a, these have moved on their turn.)
Ripley follows and ends up ahead of Hicks.
(Arrow 2)Hicks orders Hudson to fire at the spawn point 2, missed, but on his second shot he takes him down. (Arrow 3 Alien removed.)
Vasquez moves back one and aims to cover the passageway ahead. Gorman heads towards the exit.
(Arrow 4) Frost moves to cover and aims, at the barricade and doorway.

Aliens turn...
The two blips (arrow 5) throw a movement die of 4, threw the door and round the corner where they become visible to Vasquez. The blips are flipped revealing 4 & 3, a total of seven aliens.
The aliens on terminal 3 move forward 6 (Arrow 1a).
Now for the four motion tracker cards!!!
1) Alien drones... 1 blip to terminal 1... In addition remove a barricaded or add an additional blip!
Refuse to remove barricaded.. add a blip (2 Aliens)who breakthrough and stand next to Frost!
2) Relentless horde... 2 blips to terminal 1...Exhaust 6 cards.
3) False Alarm... yippie
4) Alien Lurker... Terminal 4... blip also moves 4...

There ends up 13 alien's... one representing two alien's next to Frost...
Defensive fire... Frost fires the flamethrower and misses, Hicks fires and with auto-fire removes the two closes to frost.