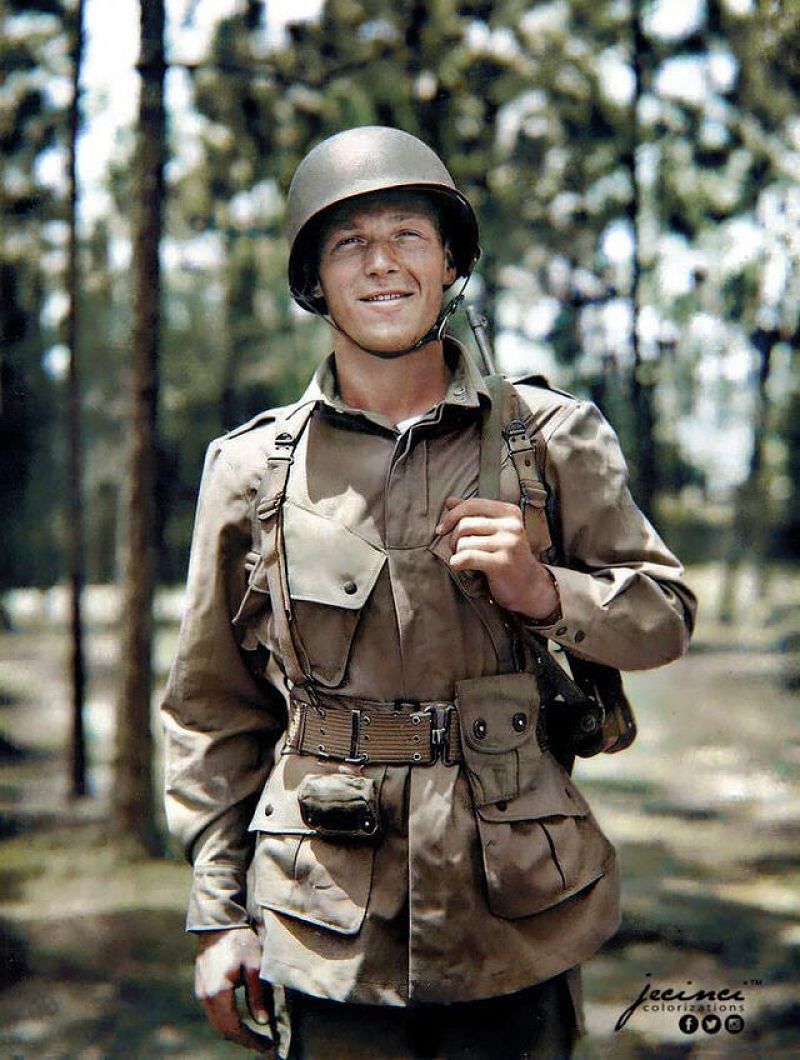 A colour (not colourised) photograph of men from 101st Airborne at rest in Normandy after the fighting around D-Day.. Image by Life Photographer Frank Scherschel.

They seem to be under the cloth of a parachute ¿?

Louis said:
They seem to be under the cloth of a parachute ¿?
Click to expand...

I was admiring that myself.
I could use a nice cover like that on my back porch.
Not sure how it would go over with my wife

Gunner said:
I was admiring that myself.
I could use a nice cover like that on my back porch.
Not sure how it would go over with my wife
Click to expand...

She’ll be okay. Just tell her that you will dig all the foxholes.

Iconic photo shows Private First Class and Sherman tank driver Julian H. Patrick (born in Magoffin County, Kentucky, on April 29, 1921), member of the 3rd US Armored Div, killed in action inside his tank on March 6, 1945 during the very well-known Tank Duel at the Cathedral of Cologne. He was the youngest of 4 brothers serving in WWII. The three other brothers survived the war. Patrick was first buried in Belgium, his body returned in 1947 to the USA and interred in the family cemetery in Salyersville, Kentucky. 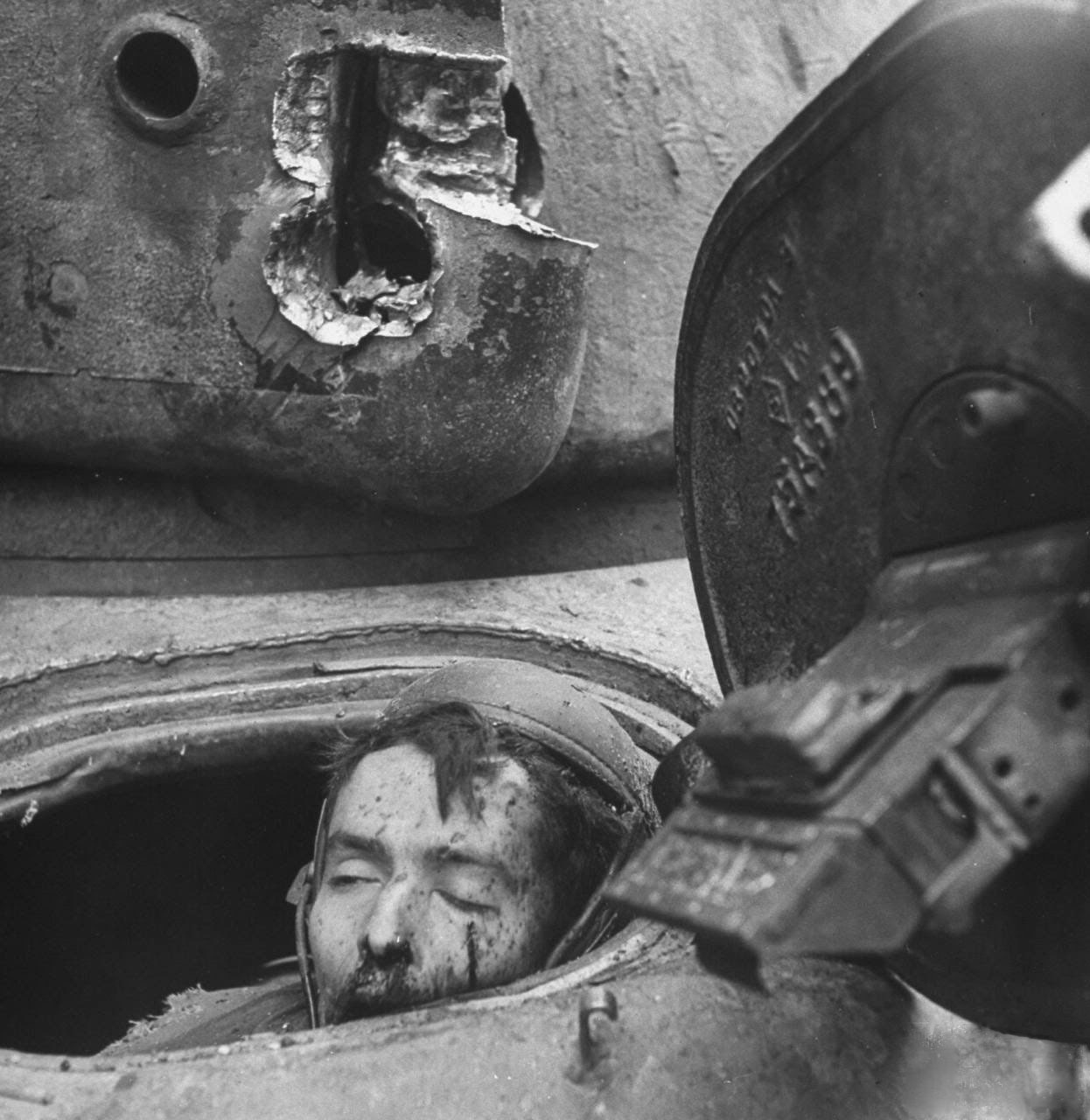 US soldier in Carentan after the fighting there in June 1944. Image by Life Magazine photographer Frank Scherschel.

Rico said:
US soldier in Carentan after the fighting there in June 1944. Image by Life Magazine photographer Frank Scherschel.

Love the picture. He looks a bit like a kid with his oversized uniform, staring at the road sign as if he's doubting to go to Paris first or go to Cherbourg instead...

Bootie said:
Re: All mapped out 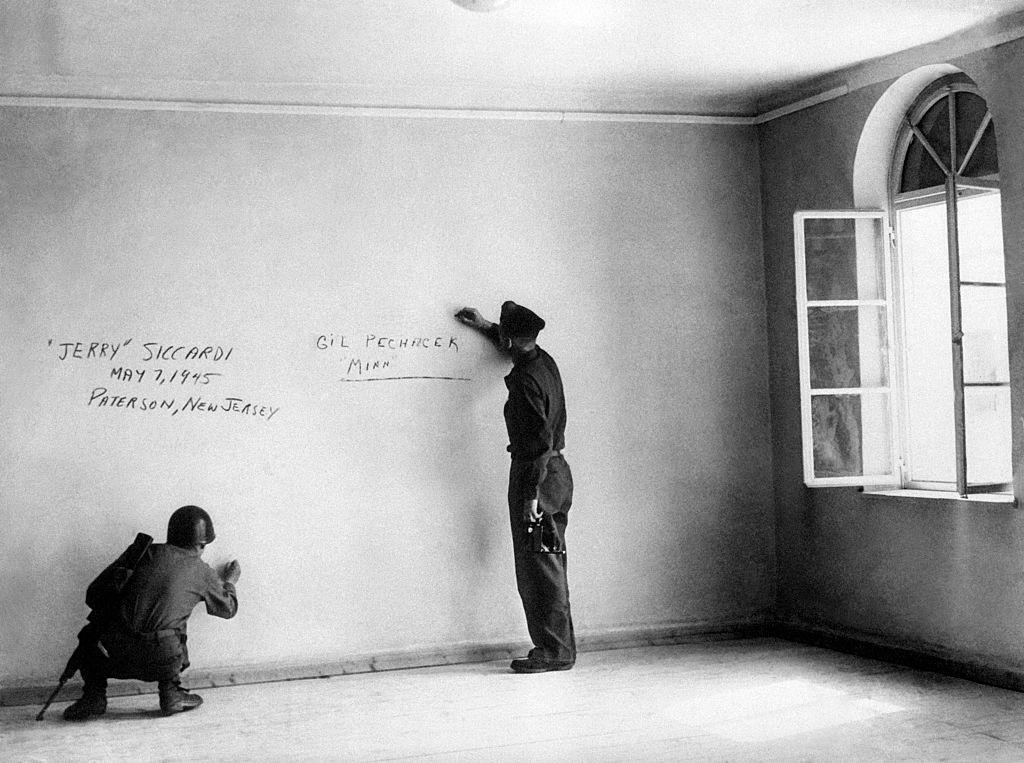 American GI's posing with Belgian children during Battle of the Bulge. 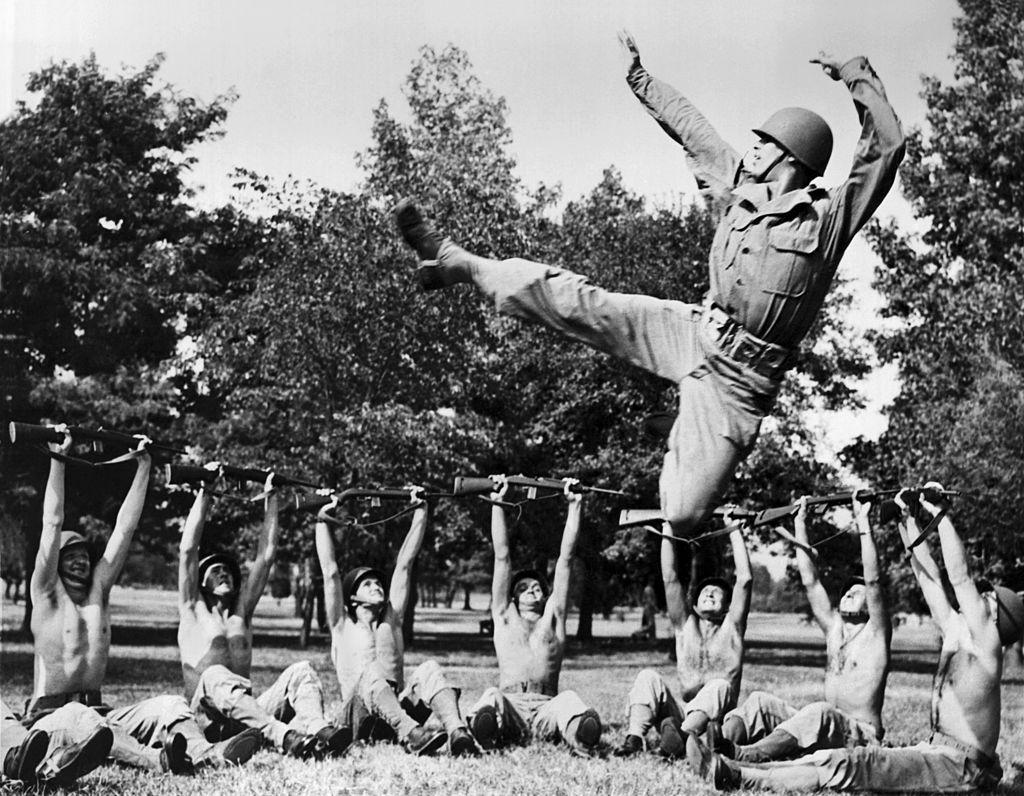 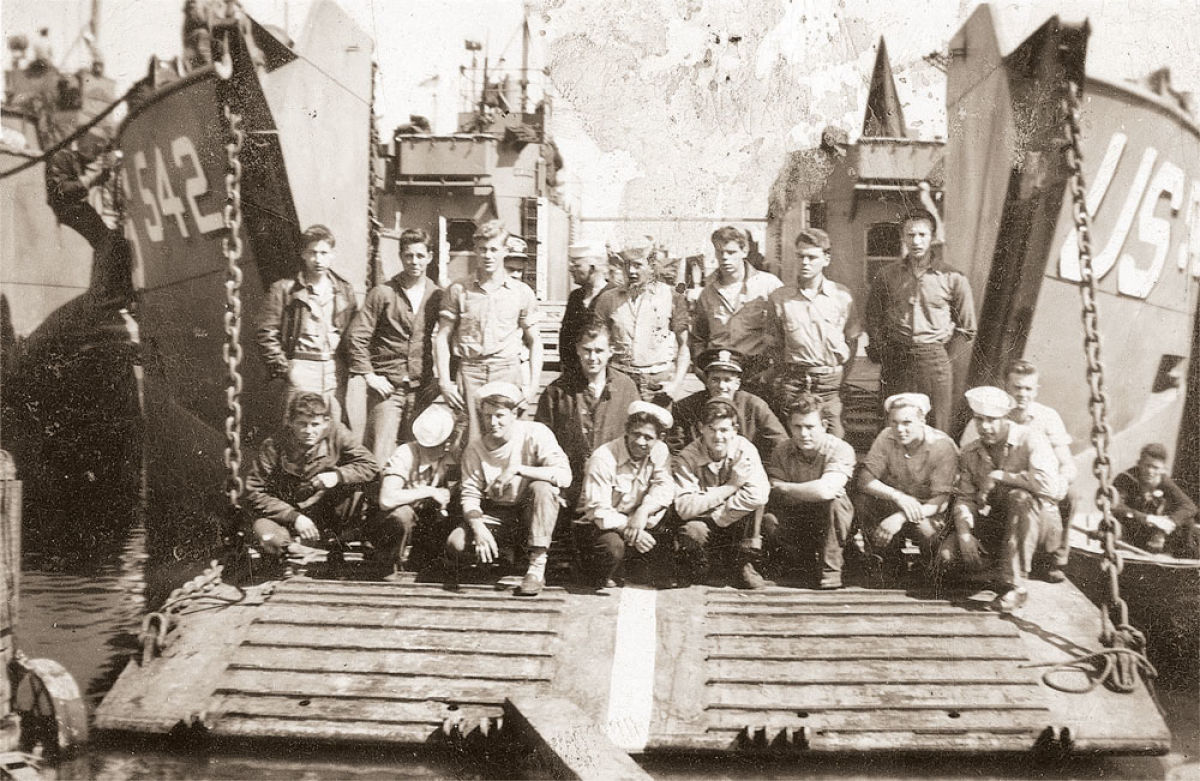 They also have fun. Brothel in Saint-Germain-en-Laye. 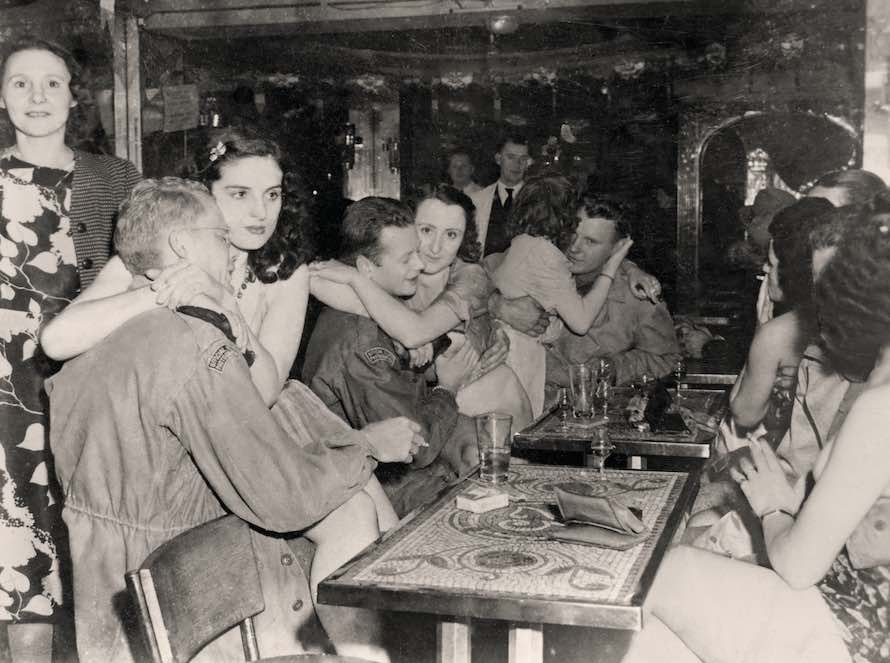 Nice pic of an American machine gun team getting ready to move out....

Colorized photo of an American soldier pretends to sleep in Hermann Goering's bed at Veldenstein Castle in Neuhaus, Germany - 1945 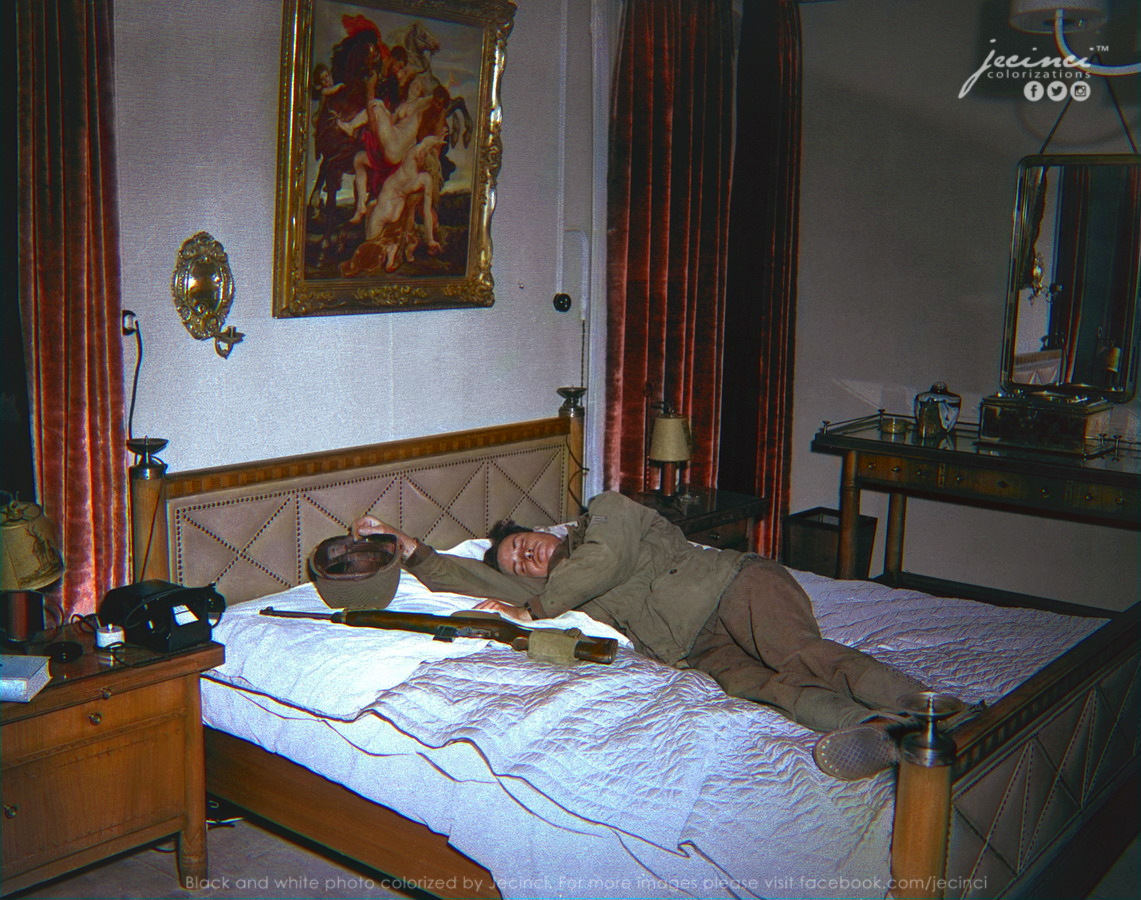 Hanging above the bed is "The Rape of the Daughters of Leucippus" (reproduction), a 1618 painting by Peter Paul Rubens and Jan Wildens, now displayed in the Alte Pinakothek in Munich.
Veldenstein Castle is a large medieval fortification situated above the town of Neuhaus an der Pegnitz, Bavaria, Germany. Hermann Göring bought the castle in 1939 and renovated it, including an air raid bunker in the lower sections. The Nazi leader was the penultimate owner of the place, and apparently his Bunker de él can still be found underneath the castle which after the end of the Nazi regime passed into ownership of the German state of Bavaria .

I wanted to see what the castle looked like and did some searching.
Along with the description above I found:
"However, he would not donate money for a swimming pool in the town, saying, "If I can bathe my ass in the Pegnitz River, so can the Neuhaus people." " 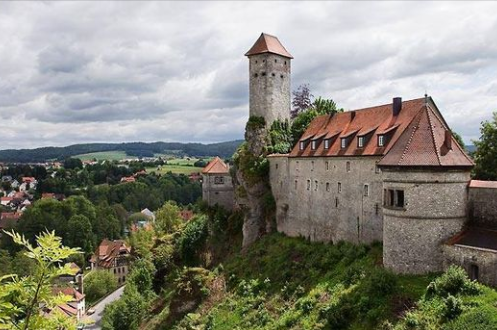 It's quite the complex: 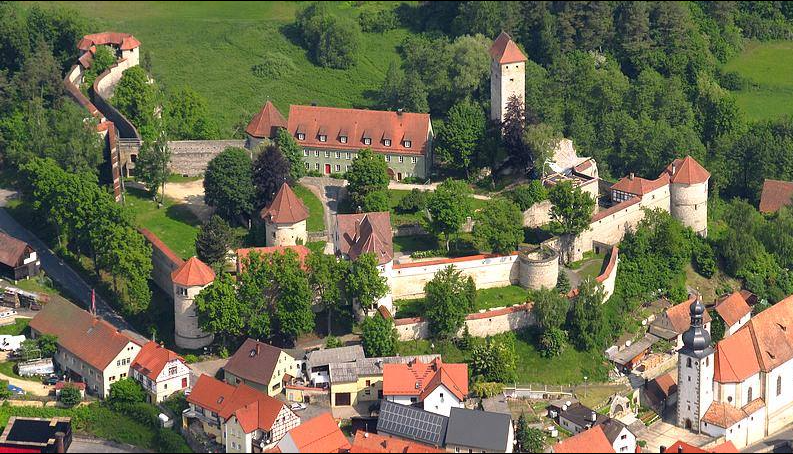