The Areni-1 shoe is a 5,500-year-old leather shoe that was found in 2008 in excellent condition in the Areni-1 cave located in the Vayots Dzor province of Armenia. It is a one-piece leather-hide shoe, the oldest piece of leather footwear in the world known to contemporary researchers.

Rico said:
The Areni-1 shoe is a 5,500-year-old leather shoe that was found in 2008 in excellent condition in the Areni-1 cave located in the Vayots Dzor province of Armenia. It is a one-piece leather-hide shoe, the oldest piece of leather footwear in the world known to contemporary researchers.

I'll bet the guy who made these was named Ugg.

I showed this to my wife. Her immediate response was: “Well, Gallipoli didn’t go so well.” She’s a keeper.

I thought I would try the same thing and showed this to my wife.
Her response was "We should go out to dinner tonight and have a nice bottle of wine."

Roman marble latrine with decoration to imitate a chariot. This was found at the Baths of Caracalla in Rome and is thought to date to 2nd or early 3rd century CE. British Museum 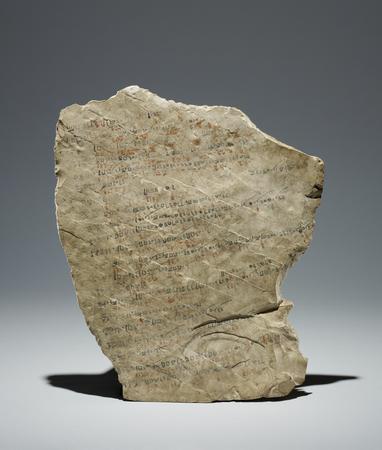 Ostracon with register of attendance at work. Labelled 'Year 40' of Ramses II, it provides a workmen's register for 280 days of the year. There are twenty-four lines of New Egyptian hieratic on the front and twenty-one lines on the back. A list of forty names is arranged in columns on the right...

When I was a manager I heard some lame excuses for staying home from work but "A scorpion bit me" would have me convinced.

This is the only known photo of Concorde flying at Mach speed. It was taken from inside a Tornado that was at its maximum speed.
Concorde SLOWED DOWN to Mach 1.5 and the photographer, Adrian Meredith, had 4 minutes to get the shot before Concorde had flown away.

A gun hidden within a Bible was made for Francesco Morozini, Doge of Venice (1619-1694). The owner of the Bible could pull the silk bookmark to shoot while the book was still closed.

I always suspected that people carrying bibles are walking around half-cocked.

Test pilot George Aird, ejected from his English Electric Lightning F1 aircraft at a fantastically low altitude in Hatfield, Hertfordshire September 13, 1962
Jim Meads, September 13, 1962
Jim lived next door to a de Havilland test pilot Bob Sowray who had mentioned to Jim that he was planning to fly an English Electric Lightning F1.
These planes are British fighter aircrafts that served as an interceptor during the 1960s, 70s and into the late 80s.
They are the only UK designed and built fighter capable of reaching Mach 2 and at the time they were top secret.
Jim had planned to go for a walk with his children that day and took his camera along so he could picture Bob landing the Lightning at the airfield.
Later that day Jim had found a good spot in a field next to the runway and waited patiently for the plane to return to land.
It turned out, however, that the pilot of the plane wasn't Bob and instead was another gentleman called George Aird - another test pilot working for de Havilland.
George had taken the plane for a demonstration flight along the south coast and, as he made his way back to Hertfordshire, he approached Hatfield from the north east so he could land.
Unfortunately, there was a serious problem with the plane that George soon realised.
There was a fire in the plane's reheat zone. Unburnt fuel in the rear fuselage had actually been ignited by a small crack in the jet pipe which weakened the tailplane actuator anchorage.
This meant the tailplane control system, which provides stability and control, had failed.
At this point George was only flying at around 100 feet when the plane suddenly and violent pitched itself upwards.
Soon realising the danger he was in, George made the brave decision to eject himself from the plane at this frighteningly low altitude.
Just before this, Jim, the photographer, witnessed this while a local tractor driver called Mick Sutterby, who was 23 at the time, had been telling him to move off the land he was on.
While they were talking they suddenly heard a loud bang as the pilot ejected and they saw the plane come down nose first giving Jim a split second to capture the photo.
Fortunately, George survived this crash and landed through the roof of a nearby greenhouse.
He landed feet first and broke both of his legs before he fell unconcious. It wasn't until the sprinklers in the green house for the tomatoes went off when he awoke to find out that he had survived.
Reportedly George said he first thought he was in heaven. However, he was back flying again in just six months and back on the Lightning a year afterwards.
The photo taken by Jim shows Mick Sutterby sat on his tractor turning around watching the plane come down.
George can also be seen ejecting out from the plane while it comes nose first down to the field just a short distance from where Jim and Mick are standing.
Following the crash, Jim's photo was reportedly restricted by the Air Ministry as the plane was a secret at that point.
Eventually the photo was released and Jim was able to take the photo to national newspapers so they could run the story.
He reportedly took it to the Daily Mail who believed the photo was fake before he then went to the Daily Mirror - HertsLive's sister paper.
The Daily Mirror paid Jim a large sum of money for the rights of the photo and they ran a centre double page spread on October 9, 1962.

These are the ruins of the Black City of Mongolia.
Kharakhoto, literally translated 'Black City', is a ruined fortified city near the Juyan Lake Basin in the far west of Inner Mongolia, China.
The site was located on the northern borders of the Tangut empire and consists of a large walled city, nearby stupas and a large area of cultivation to its east containing homesteads and farms.
The city was a centre of religious learning, art, and a trading hub that was founded in AD 1032 as a Tangut stronghold of the Tibeto-Burman tribal union, emerging into the empire of Western Xia.
The city walls were built of stamped clay and reinforced by a wooden framework of which the big rafters could be traced in three rows all around the inside face of the wall.
Gates lead through the western and eastern wall faces, each protected by a rectangular outwork built as massively as the walls themselves.
The city is identified by Stein with Marco Polo's 'City of Etzina'. It was later sacked by the Mongols. After the city was taken, Khara-Khoto was abandoned and swallowed by the sands of the Gobi Desert until it was rediscovered in the early 20th century.