@Josey Wales organizes FGM Aram3 Squad WW2 co-op play sessions once or twice a month. Here are some of the things we've covered already in our past training sessions and combat missions. If you missed previous sessions, review what we've done and come join us soon. If you've participated in previous sessions, here's my notes of what we've covered. Arma3 is an exceptional co-op game experience. It's WW2 mods add a whole new dimension to our other Combat Mission CMx2 game play experiences too.

Where to find us: We play on Steam. Check out Steam Group "FGM Arma3 Squad" and request to join. This is where we schedule future sessions and provide the Server name and password for scheduled sessions.

This assumes that in Steam, you have 'Friended' other FGM members and already joined Steam Group "The FGM ARMA3 Squad" in the Arma3 Steam community.

To join a session in Arma3, go to the servers tab within the game and look for Friend's servers. When you find the one scheduled, join it. Once there chose a role suitable to your experience and skills
Squad Rules;

When you first join a game session, you will be in a Base Camp / Training Assembly Area. First thing you do is unload you weapon in Base Camp / Assembly Area.
These sessions focus on creating and maintaining team cohesion, good communications, good leadership and mutual respect.

The Base Camp / Assembly Area is where the session leader will go over the game planned for that session. The session will usually consist of 2 parts. The first part will be going over drills and procedures, and the second part will be a mission. After initial assembly, your Squad Leader will tell you what role to adopt and what equipment and ammo to bring for the mission.

In the Base Camp / Assembly Area - establish team communications for the game by using the Comma key [,] to change communication channels between Global and Group. Use the channel instructed in the briefing.

When you are shot you will become incapacitated for 2 to 3 minuts before you bleed out and die. During this time you can be revived by any player. Medic players can revive you much quicker than the non-medic roles. You can force a re-spawn, but it is not recommended as it will take you longer to get into the fight. The re-spawn counter is a couple of minutes long.

If you are revived by another player, you continue from where you are with the equipment you had before you were shot. If you re-spawn you return to life in the game and re-spawn in Base Camp.

The mission controller (Zeus) will get you back with your squad and back into the fight.

You can select between frag and smoke grenades within the game.
[CNTL+G] to cycle through and select desire grenade you want to throw. This will show in the Stance Icon in the upper left hand corner HUD of your screen.
[G] = throw the grenade at the player aiming point. Make sure to press Talk [CAPS LOCK]) and yell "Frag Out!" or "Smoke Out!" each time you throw.

In these sessions, 3rd person view is disabled. We play from the first person perspective. I use a mod which replaces 3rd person situational awareness of your immediate surrounding teammates with a graphical user interface called ShackTac UI. It shows your position relative to any other squad mates within 50 meters of you. It displays as an expanding circle HUD in the bottom center of your screen. The circles show you distances of 15m, 30m, and 50m. Use ShackTac to keep track of teammates

The command structure within the squad is as follows;

Squads move in formations. Movement is by teams within a squad - Able/Alpha & Baker/Beta fire teams 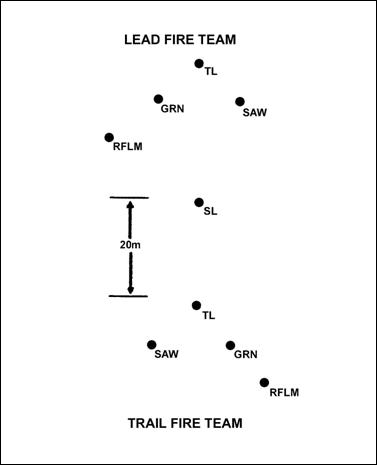 TEAM WEDGE COLUMN​
Team Movement Techniques
There are a variety of movement techniques that are applicable to Arma's environment and simulation fidelity. Utilizing the best one for a situation will do a great deal to protect a team and provide security as well as flexibility, and it's important that all players are familiar with the differences between the various types.

Bounding Overwatch Guidelines
Here are some general guidelines to keep in mind during bounding overwatch.
Successive Bounding Overwatch - sometimes called "Bumping"
Successive bounding overwatch is the slower bounding technique. In it, one team advances, halts, and then the other team advances on-line with them and halts. The process repeats itself. This provides a high level of security, but with the trade off of taking longer to employ.

Alternating Bounding Overwatch
Alternating bounding overwatch is the fastest of the two, sacrificing some security for additional speed. In this mode, the teams bound past each other before stopping and allowing the other team to pass them.

Bounding overwatch should be used any time that contact is likely or imminent. The security of having an entire element (be it a squad or fireteam) specifically scanning for threats while another element moves is enormously beneficial to the team. The voice command to initiate bounding overwatch is along these lines:

"Squad, alternate bounding to the SW. 30m bounds. Baker to move first. Baker move when ready"​
​
The response from Baker team leader​
​
"Baker moving"​
​
Once Baker has arrived an their overwatch position Baker team leader reports​
​
"Baker set"​
The bound continues until the squad leader calls a halt.​
Note that bounding overwatch changes to fire and maneuver once contact has been made. The same basic principles apply as with bounding overwatch, with one team putting down fire while the other team maneuvers to a new position, at which point the moving team takes position and begins firing to cover the advance of the other team.

Danger areas are places where there is a high level of vulnerability for anyone caught within them. They must be treated with due caution. These are places like bridges, streams, large open lanes in forested terrain, or even streets in an urban environment. Danger areas are frequently observed by the enemy, and can have snipers, machinegunners, or enemy rifle fireteams ready to deliver fire into them on short notice.

The technique for crossing a danger area is another form of bounding overwatch. The idea is to maintain security and cross in small numbers that will not draw undue attention or fire. Once you have determined that you are facing a "danger area" and must treat it as such, there are four basic steps to follow.
Note that if the group is under fire and crossing a danger area, smoke should be used extensively, and security for the crossing elements should be provided by suppression fires.

Contact is the enemy shooting at you. When taking fire do three things first.
Then when you think it is safe for you personally to do so, raise up [CNTL+W] to observe and report.

Enemy Contact reporting
Alert your squadmates by saying, "Contact". Tell them what you see. Direct them where to look. Tell them how far away to look.

Use the "3D" method after you alert your squad; Description / Direction / Distance. Be brief and decisive.
- ALERT = Telling mates you're under fire by saying, "Contact!"
- DESCRIPTION = A terse sentence about enemy sighted
- DIRECTION = A compass heading (use ShackTac UI) for the direction your mates should look to see the enemy
- DISTANCE = The estimated distance or easy to find landmark where the enemy is located

Keep it short and sweet. Be brief and clear.

There are three (3) Actions in Contact for an Arma3 squad to chose
The squad leader decides. The team leaders direct. Team members perform.

If you want to learn more Arma3 tactical lessons, check out dslyecxi's Arma 3 Tactical Guide online edition
or read @Badger73's extract from it attached to this post.

One question: I read the rules before our last game and didn't pick up any enemy equipment. However, I saw someone pick up an MP40, and several people looted and used German grenades.

Should I observe this rule next time, or is it some kind of "soft rule"?

Yes the rule should be observed. Having said that, enforcing a rule simply for the sake of enforcing it is not the way to go.

As Zeus I ask myself a series of questions whenever I notice there is an infringement of the house rules;

For this particular infringement, the weapon was picked up towards the end of the session after the player had run out of ammo for his primary weapon. It didn't impact on the immersion or the enjoyment. So on this particular occasion I was happy to leave the decision to the Squad Leader.

If for example I saw everyone grabbing MG42's off of dead German MG teams about 15 mins into a session, then I would step in.

The reason for the rule is to adhere somewhat to the 'realism' aspect. In reality the weapon you are issued is not yours, but is the property of the force you are fighting for. You as the soldier, however, are responsible for it. Additionally, using enemy weapons can lead other friendlies to believe you are hostile.

In order to not get into the situation where enemy equipment is being used, the Squad Leader must ensure to the best of his ability that the squad is equipped adequately for the mission ahead. In addition the Squad Leader must ensure that ammo and equipment is checked after an engagement and that it is distributed if required. We will cover these topics in the next session.

I will also look at organising re-supplies for longer missions.

Good thread, and if only I Can remember it all.

Nathangun said:
Good thread, and if only I Can remember it all.
Click to expand...