Thanks, I try to be a bit snobbish about games since I have so little time to play them! Though this time of year is when I get to make up for lost time. Taking a break from more traditional sims, here's another post about a session from Call of the Wild: https://rinaldiaars.blogspot.com/2019/12/stalking-widowmaker.html

This thing still on? Been very busy lately but I have a few things on the slowburner. If you haven't heard, some devs from Killerfish (the makers of Cold Waters), operating under the name Triassic Games, have shown off some very interesting tidbits about a new naval warfare sim. Coupled with the steady-as-she goes development of Task Force Admiral there are a lot of naval warfare games to look forward to.

So I figured, in the meantime, I'd scratch that itch by playing through the entirety of Atlantic Fleet's strategic campaign. Here's a little encounter I had a few turns ago between one of my heavy cruisers and a German surface raider...read it about it here: 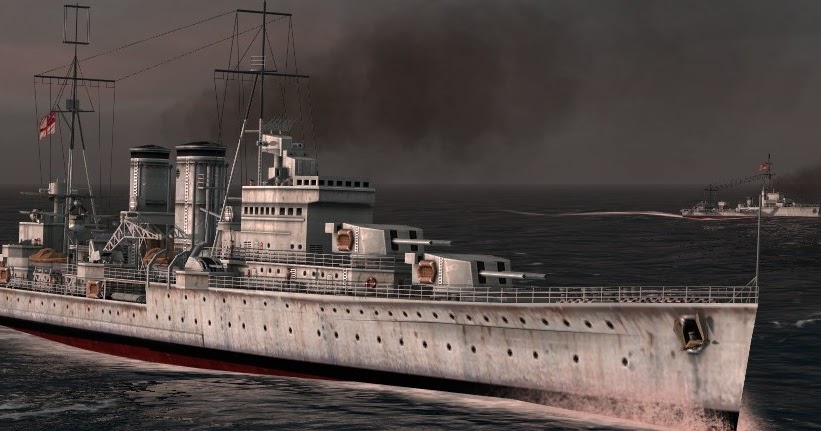 Game: Atlantic Fleet My personal hype is starting to build with the announcement some months ago of Task Force Admiral and, more re...

Rinaldi said:
So I figured, in the meantime, I'd scratch that itch by playing through the entirety of Atlantic Fleet's strategic campaign.
Click to expand...

That's what you call the slow burner?!
Always enjoy your AAR's.

Hope everyone is keeping safe and healthy during this fiasco, and staying the frig at home. Keeping with the nautical theme, I went back to an absolute favorite of mine: Silent Hunter IV

Read about it here: https://rinaldiaars.blogspot.com/2020/03/the-anatomy-of-submarine-patrol.html

I take it Silent Hunter is more challenging than U Boat.

They both have their charms, I wouldn't personally knock U-boat. Optimization issues with my laptop that I neither have patience nor stomach to deal with and sort out have rendered it unplayable for me for now but there's a lot to be said for its crew management, which is very much an after thought in SHIV.

In terms of firing solutions, damage models, missions and escort AI, I'd give the edge to the Silent Hunter series - with one of the many mega mods. U-boat is much more playable out of the box, given that it's an early access game.

There's a part 2 to come later in the week. It's been frustrating taking screenshots at night, I may have to turn gamma up in game, even post-editing doesn't make things much better. Which is problematic because day-time attacks are asking for trouble. Case in point:

There seems to be a hunting theme in most of your AAR's.

Nathangun said:
There seems to be a hunting theme in most of your AAR's.
Click to expand...

I assure you there's nothing sinister about it 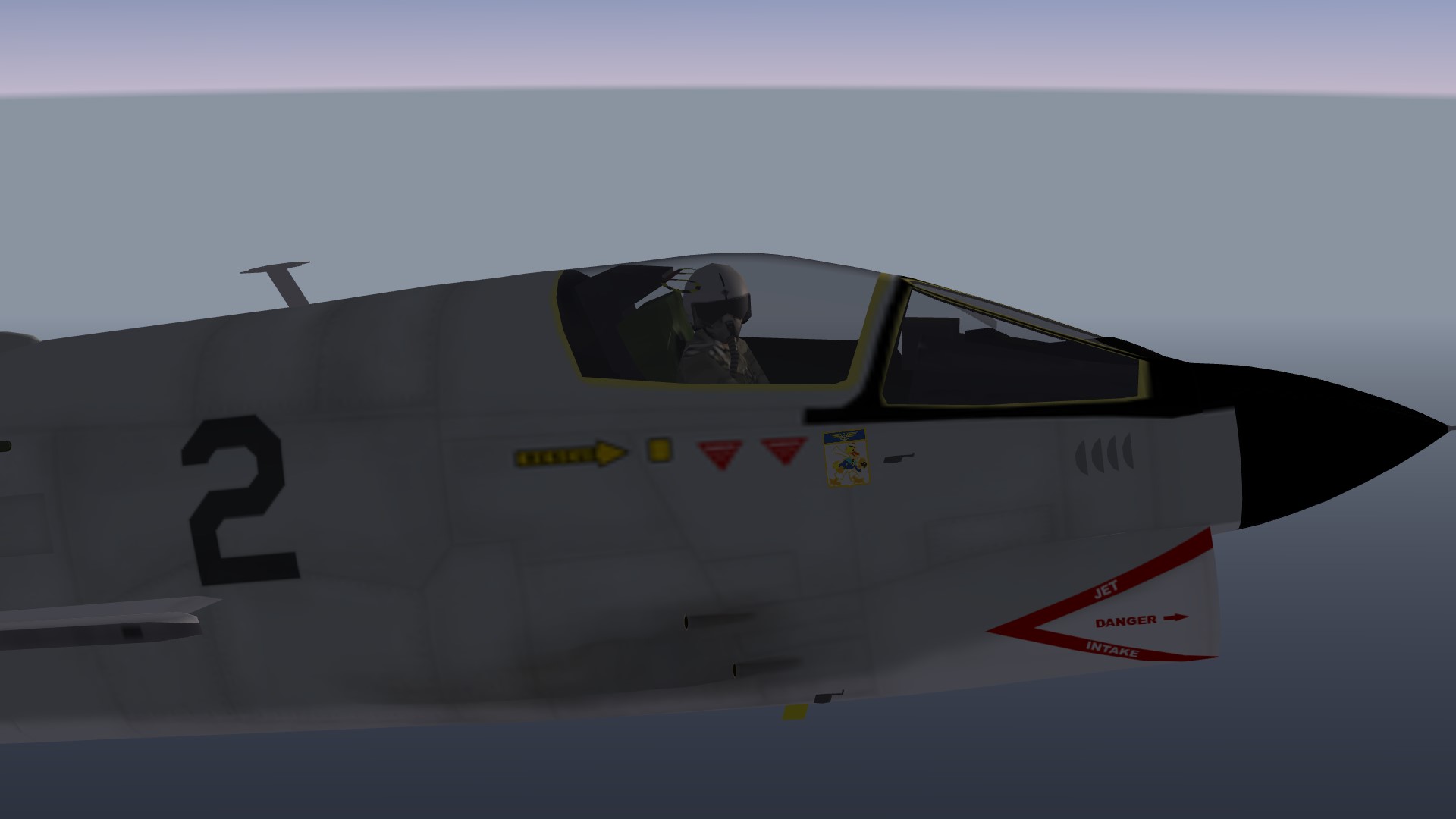 Jean-Pierre Marseille, CO of the 12th Flottille during the battle of Iceland (19th-22nd September, 1975),the 12th Flottille was the primary fighter complement on the French carrier Clemenceau, and today operates as a Rafale-M squadron off the Charles de Gaulle. 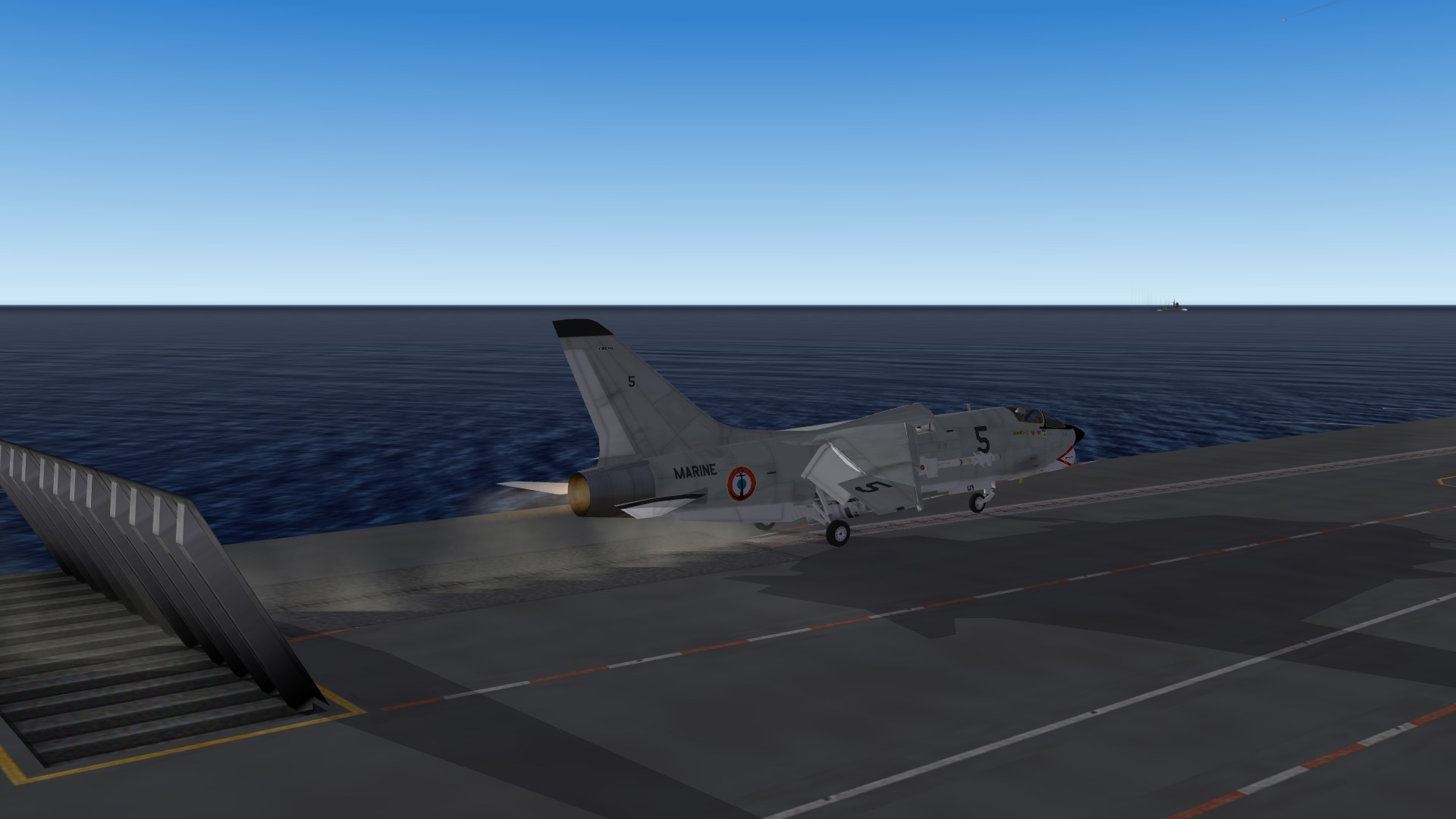 The Clemenceau's air group is surprisingly large for a carrier of her size; 14 or so Etendard's comprising her strike wing. Surprisingly, and a bit worrying, she only carried 8 fighters. American Naval commanders in WWII had quickly (and correctly) arrived at the conclusion that a Carrier needs far more, perhaps even a majority, of fighters. The dearth of F8s would start to wear on our ability to contribute to the battle after we began to take casualties. 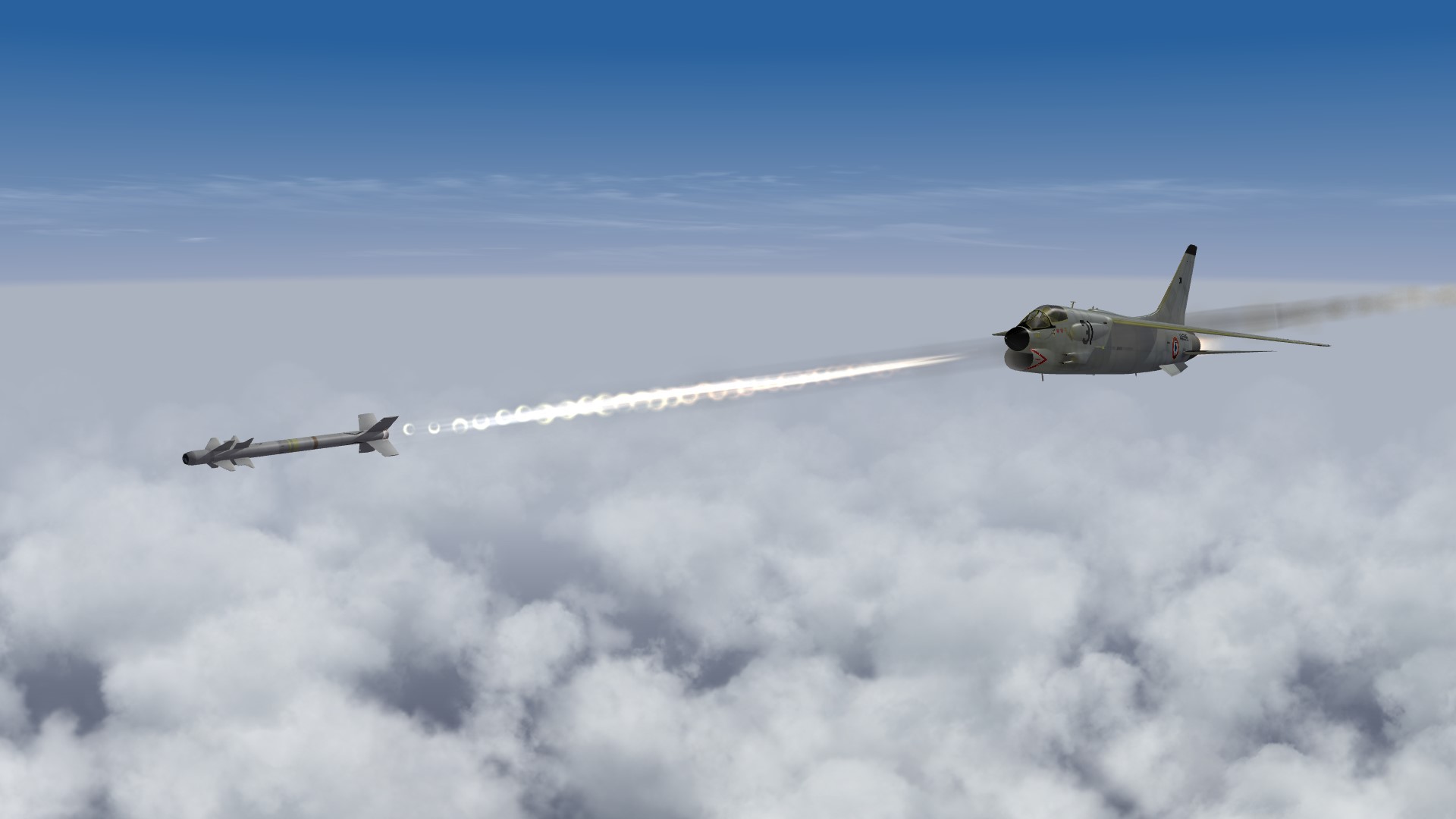 Despite being the 'last of the gunfighters' the F8 got most of its air-to-air kills with IR missiles; so too would my squadron, firing R550 Magics and Magic Is. 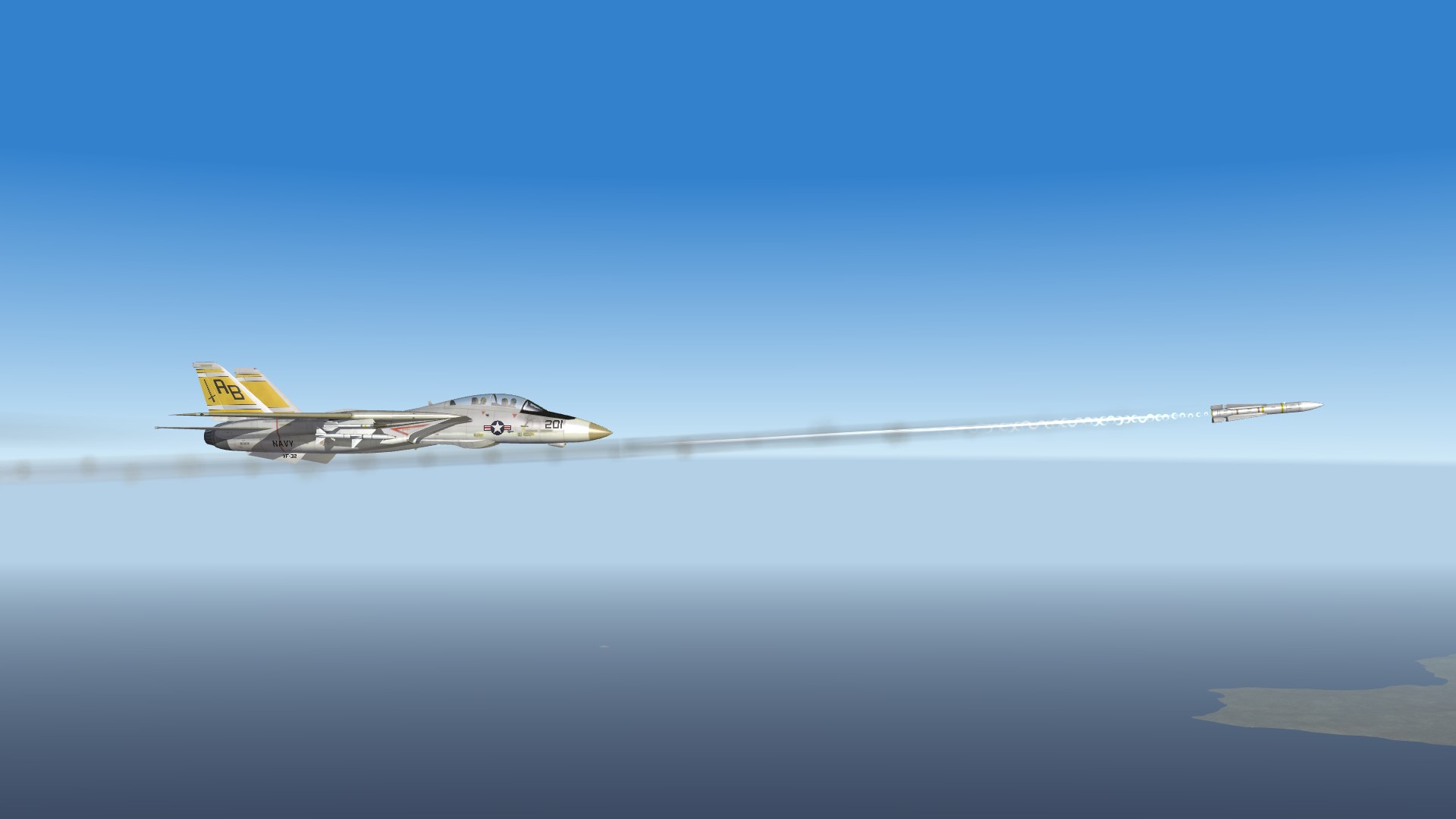 It goes without saying that the Clemeanceau battlegroup is a small part of a larger whole: The USS John F Kennedy and the USS Forrestal provided the backbone of our fighting power. By the end of the four day intense land-sea-air campaign, the USN would account for 7 of the 10 aces produced. 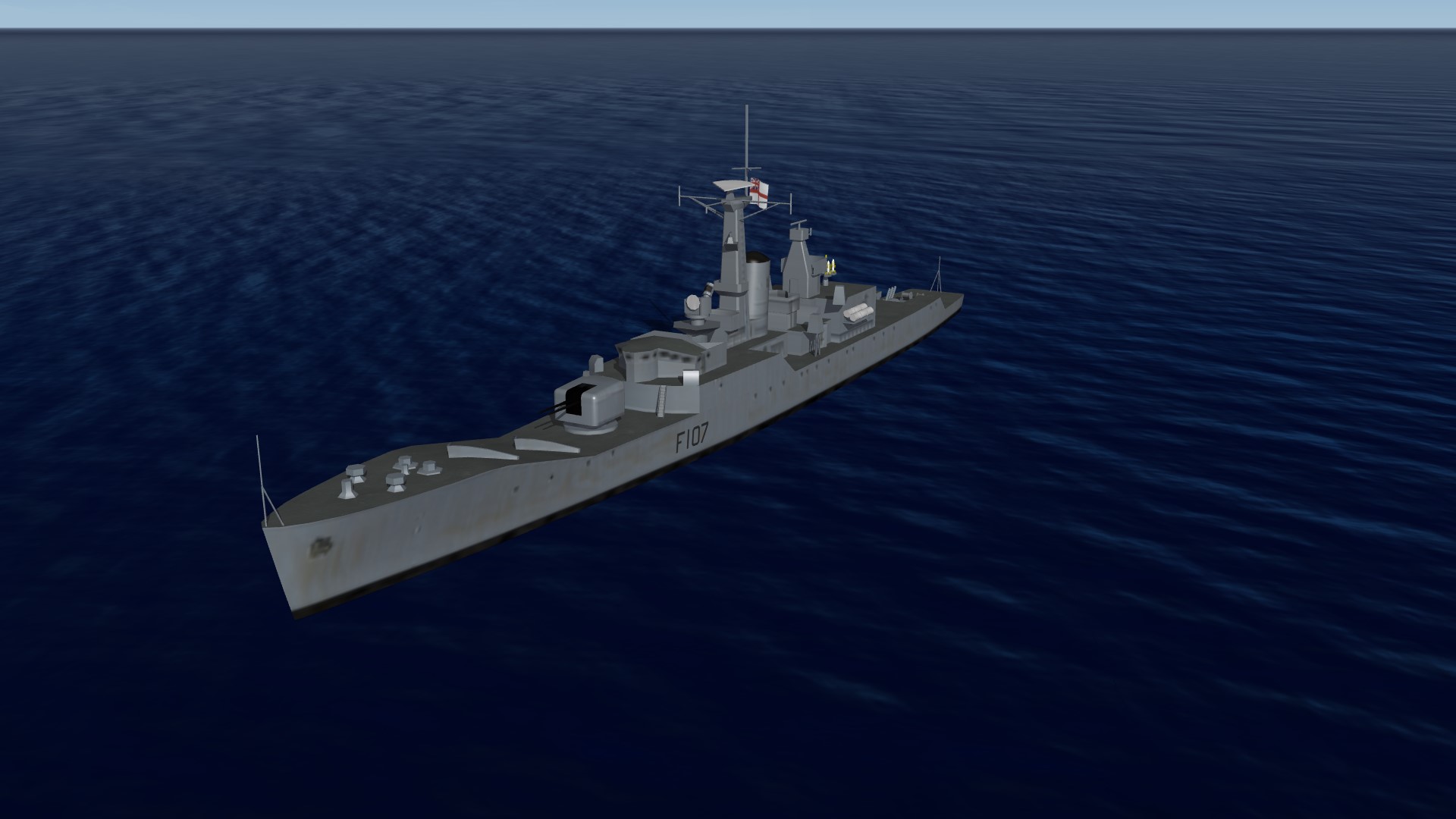 A 'batch 2' County Class destroyer of the Royal Navy, acting as the Ark Royal's main surface combatant. The 1975 campaign stands at a weird threshold between the missile age and an era of naval technology more familiar to WWII vets. This more classically equipped Destroyer, with limited, after-production missile installations, would rub shoulders with a pair of Type 42s (of Falklands fame). 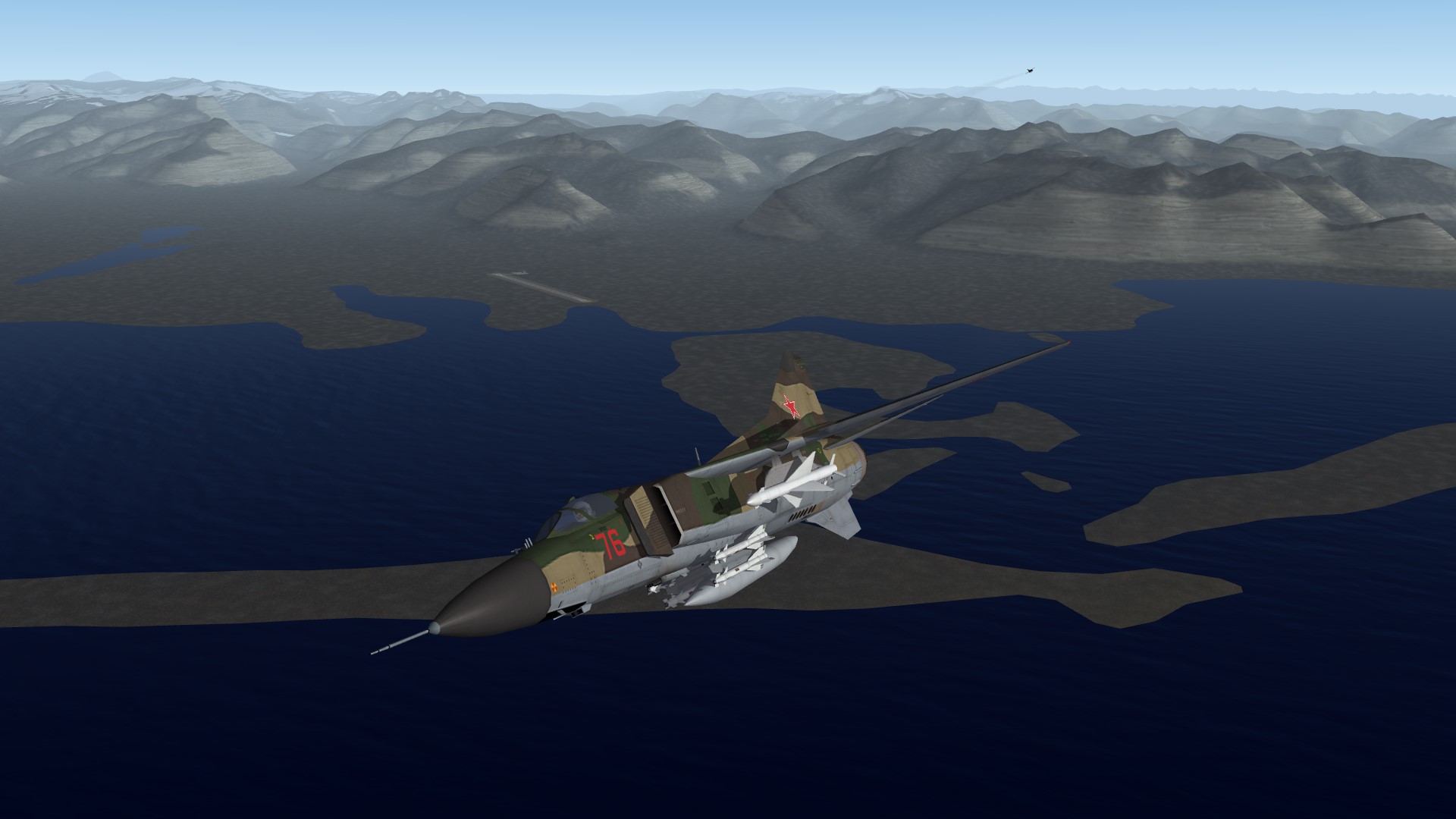 The Mig-23M "Flogger-A" - Perhaps the most capable adversary against us. I know the Mig-23 and other Soviet fighters have been largely panned by historical events, but in 1975 its worth our respect. Indeed, by the end of the campaign, the Soviet AI produced a Mig-23 Ace who taught RAF Harriers a painful lesson on the 2nd day of the battle. M-r Ivan Kuzmischev would be shot down and captured over the Ark Royal battlegroup when, in a fight with ourselves and some F-14s, his unit strayed too close and too low to the escorts and were hit by anti-air missiles. 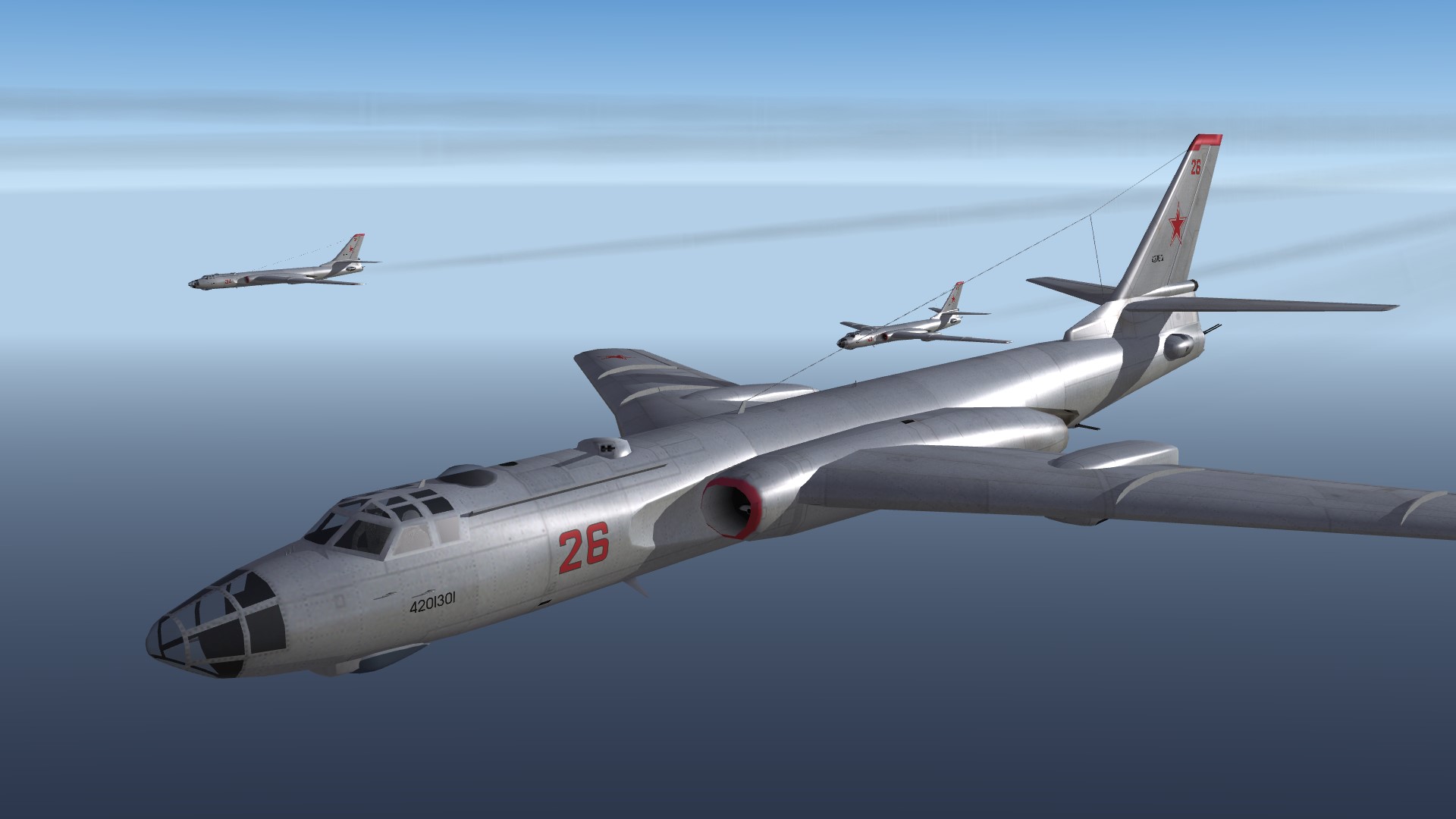 Tu-16 'Badgers' - Soviet Strategic aviation was omni-present during the first three days of the battle. Searching for our carriers, and attacking Keflavik and Reykjavik were their main missions. They kept the F-14s out of the dogfights and busy intercepting. The F-14s were so effective in their fleet defense role that when a Soviet SAG entered the AO they had no fix on our location and could not attack us 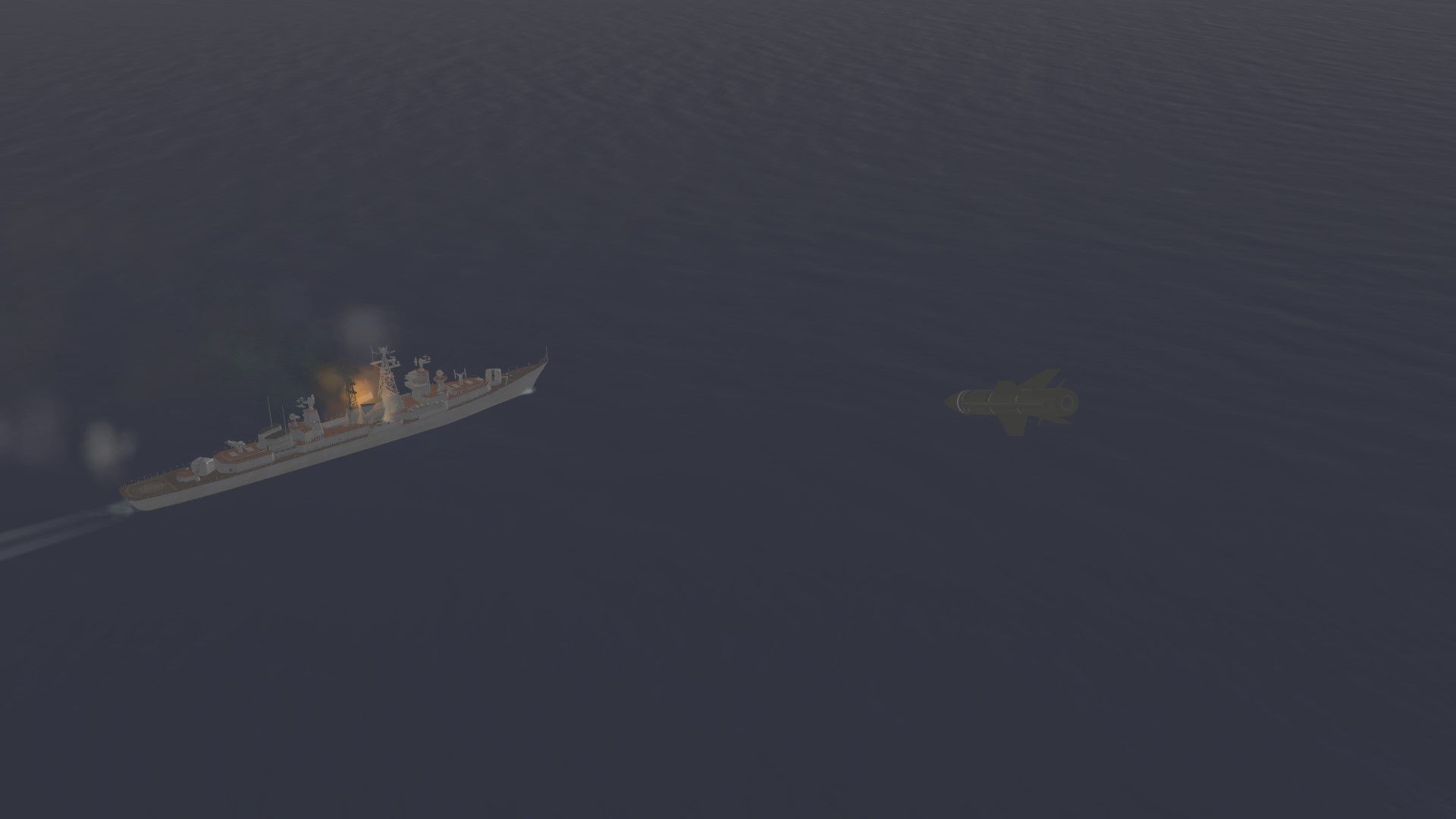 The same could not be said for us. Three strikes across two days sunk several ships in the Soviet SAG, including its flag ship, a modern Kresta II BPK. The surviving three ships slinked away. Here, an anti-ship missile fired from a FAA Bucaneer screams in on a Soviet frigate, her fire control radars already burning from anti-radiation missiles. 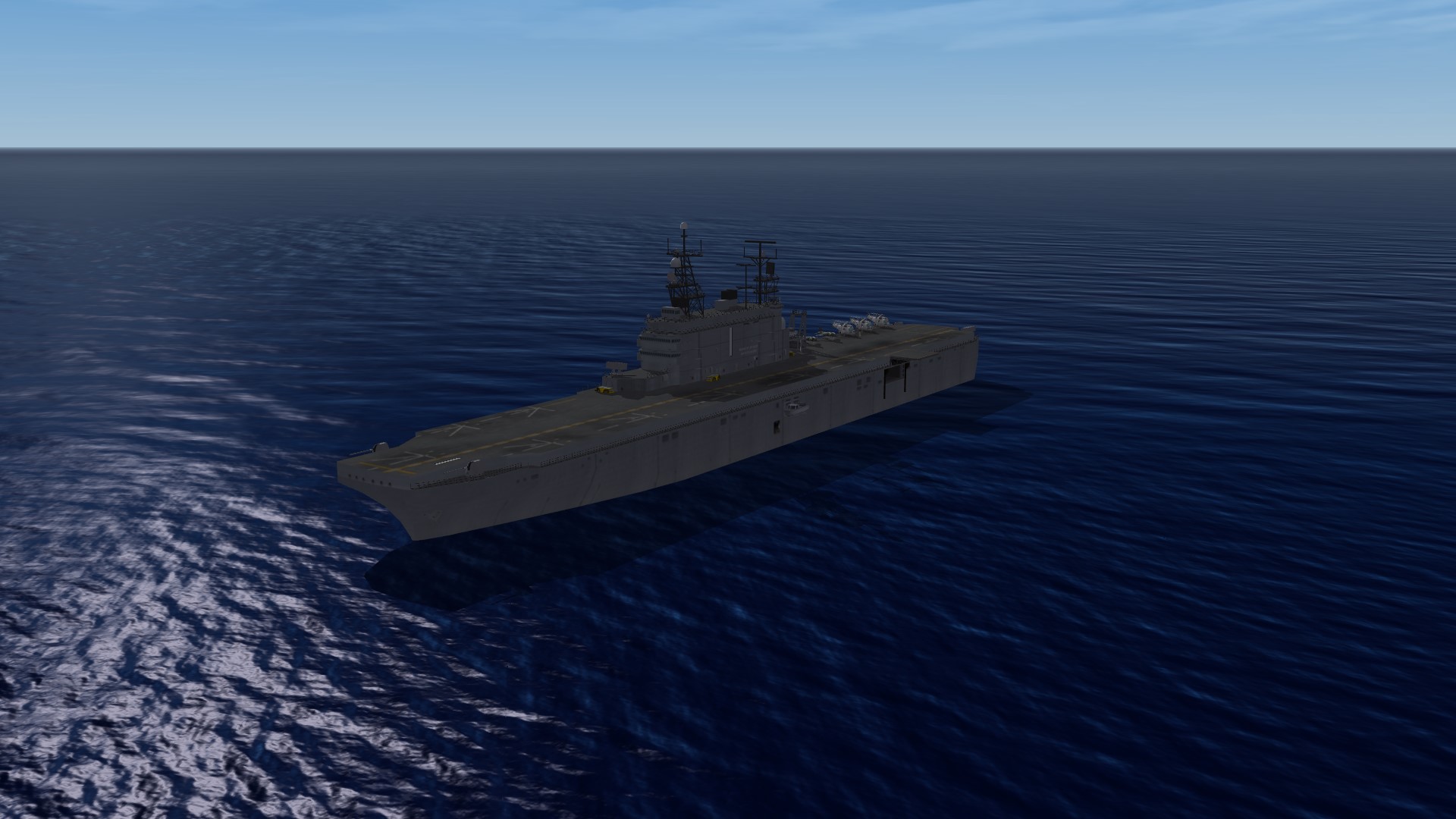 Once a Marine Amphibious Group, led by the Tarawa-class LHD seen here, arrived the initiative switched to NATO swiftly and irretrievably. Losses remained high on Sept. 20-21s, however. Soviet VDV repelled one of our attacks and Mig-23s managed to get past escorting F-4s and F-14s to savage the Marine Harriers supporting their troops: only 3 USMC Harriers survived, out of a total roster of 8. With the ground war intensifying our once-myriad, spread out missions, switched to massive strikes on one or two areas. Often, the Ark Royal and JFK would provide close support and operational strikes (think supply dumps, artillery, roadways) while the Clemenceau, Forrestal and land-based fighters and bombers (including at least two strikes by a massive bomber stream of B-52s!) hit Soviet convoys attempting to reinforce/resupply, Soviet-held airfields and other strategic targets. 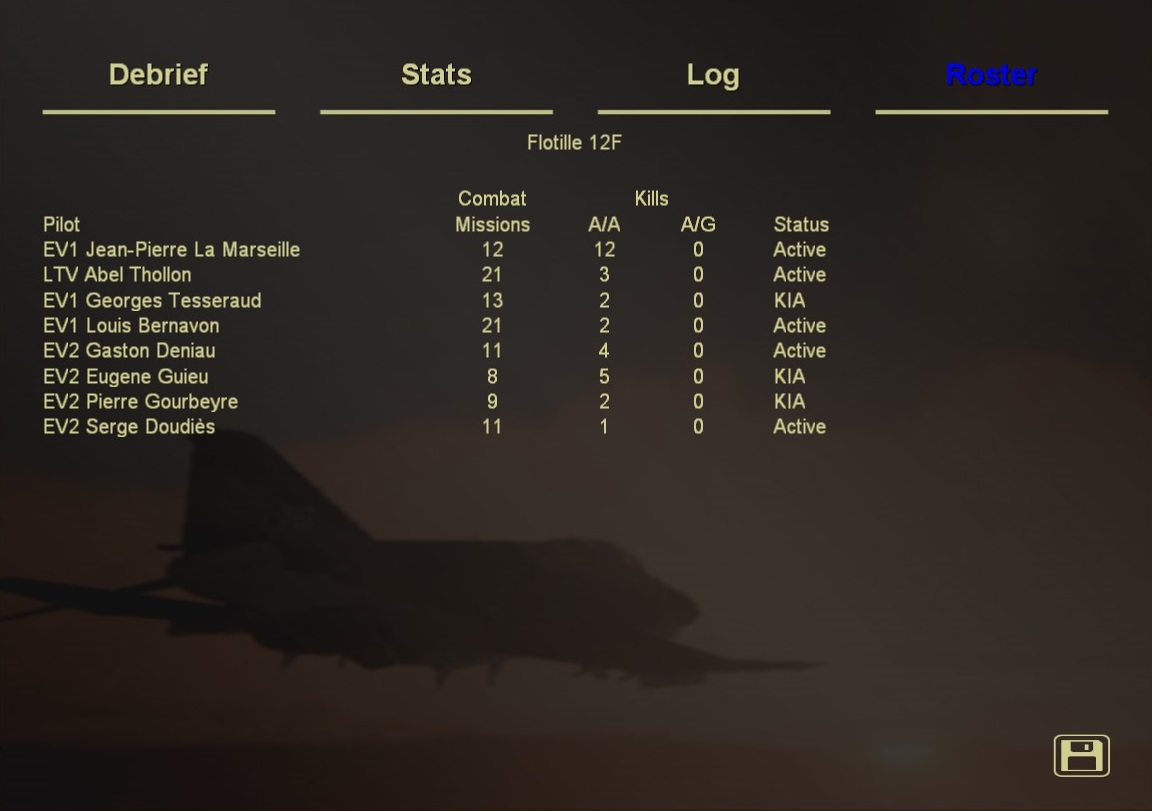 The price of conflict.

Lovely shots! The F8 takes me back about 45 years when I had a Revell model F8. Back then I thought it was a weird plane. Seeing your shots makes me nostalgic.

Here's a little slice of a PBEM in Black Sea: https://rinaldiaars.blogspot.com/2020/05/equilibrium-black-sea-vignette-aar.html

My opponent threw in the towel prematurely, I think, it likely would have been a spanking for me otherwise.

Nice AAR, I enjoyed that. Also I noticed your interest I naval combat sims. I use to play Aces of the Deep, And Slient Hunter III. Been missing a decent sub sim. i also had Great Naval Batthe 3 & 4. I’m interested in what you have to say and show for what is currently available or forthcoming.

Anschlag said:
Nice AAR, I enjoyed that. Also I noticed your interest I naval combat sims. I use to play Aces of the Deep, And Slient Hunter III. Been missing a decent sub sim. i also had Great Naval Batthe 3 & 4. I’m interested in what you have to say and show for what is currently available or forthcoming.
Click to expand...

The classics hold up in terms of Silent Hunter III and IV, I can't get enough of Cold Waters and recommend it wholeheartedly. U-boat appears to be shaping up and I've enjoyed it, though not as much as my peer group; the game is very poorly optimized right now so legacy systems and laptops even with decent specs, chug. There's almost too much choice coming soon: Task Force Admiral, War on the Sea and Sea Power are all coming to us in the near future and I'm about ready to squeal with delight. The latter two are by the same devs who made Cold Waters so the project is in good hands. I'm particularly interested for Sea Power, I want something to fill the gap that time and technology has created since the release of Fleet Command. Wolfpack appears interesting as well if you got a trusted group of people to co-op with. Naval games in general appear to be undergoing a renaissance, thank Goodness.

It’s interesting you say that we will face an embarrassment of choice in the near future. I am not familiar with most of the games you mention. Discussion on the Battlefront forums were about the lack of a decent WWI naval combat sim and didn’t expound on any other choices.

Ah yes I remember that thread, I recall recommending Jutland pro. There's also Ultimate Admiral: Dreadnoughts around the corner too.

Here's another for you all: a mini-AAR from Graviteam. My stomach for this game is officially spent for a while now so don't expect more. Still like pulling teeth. 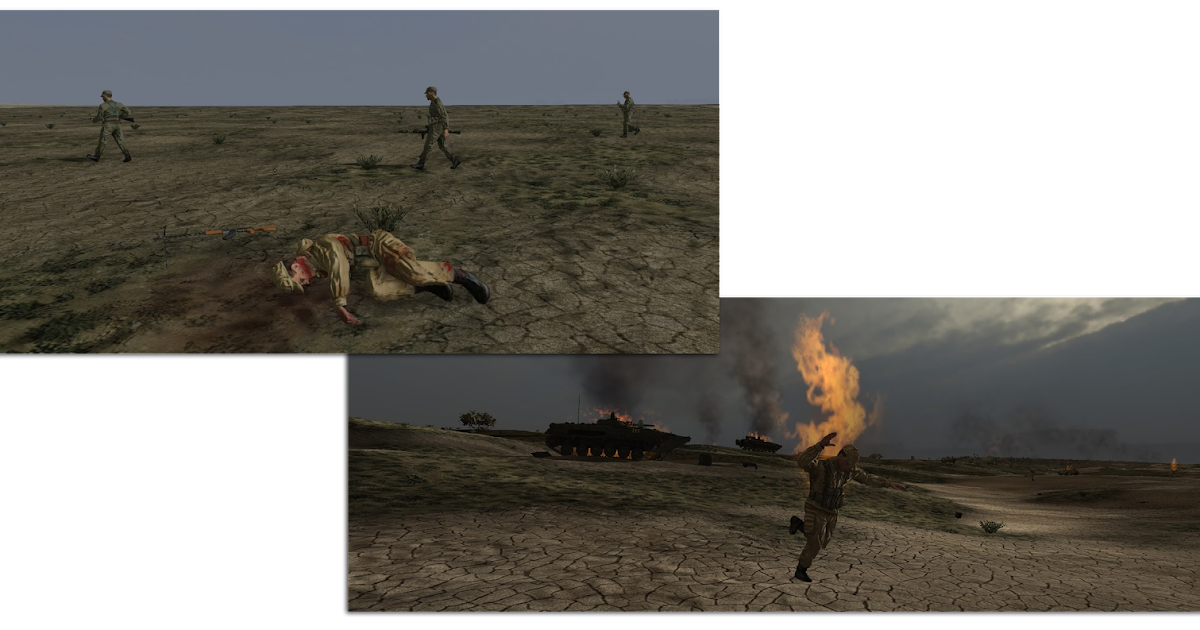 The value of a reverse slope: Defeating a Soviet MRC

Breaking out the museum pieces Reminder: Click on images for larger resolution . Here's another little tidy vignette, this time from...

Is it the Game system itself or that particular setting? I have Mius Front and it’s a constant struggle.

The game itself! I can't man, I just can't. Which is a shame because it hits a lot of interesting niches.