So, @Nathangun have been cooking up this crazy idea of resuscitating a version of the legendary CMBB Onion Wars, an epic meta campaign that ran over many years -- playing out a fictional conflict between two warring nations sharing an island, using the CMx1's CMBB game.

Using rules and experience from several campaigns we've both run, played and tested over recent times ... we've been working on a new version using CMFI/GL -- the idea is to create a fun, hopefully fast-paced campaign with an element of role playing with a generalissimo in charge of either side/regime and a bevy of tactical commanders playing out the CM battles each side.

War breaks out on the fictional Borscht Island... and both sides armies begin mobilising their small regular forces, their light border defense units already in place and several regular infantry battalions and at least a mechanised/tank battalion each side (including limited air forces and naval units) of more or less similar size...and then their 2nd string reserve forces, and once that is complete and the first opening battles are being fought, replacement troops are brought in, new equipment produced and new formations built up as allowed by the limited industrial capacity of each nation. (each turn would in abstract represent about a week real time)
Each side will also have a higher quality airborne/para and/or commando/marine company available for some extra fun. 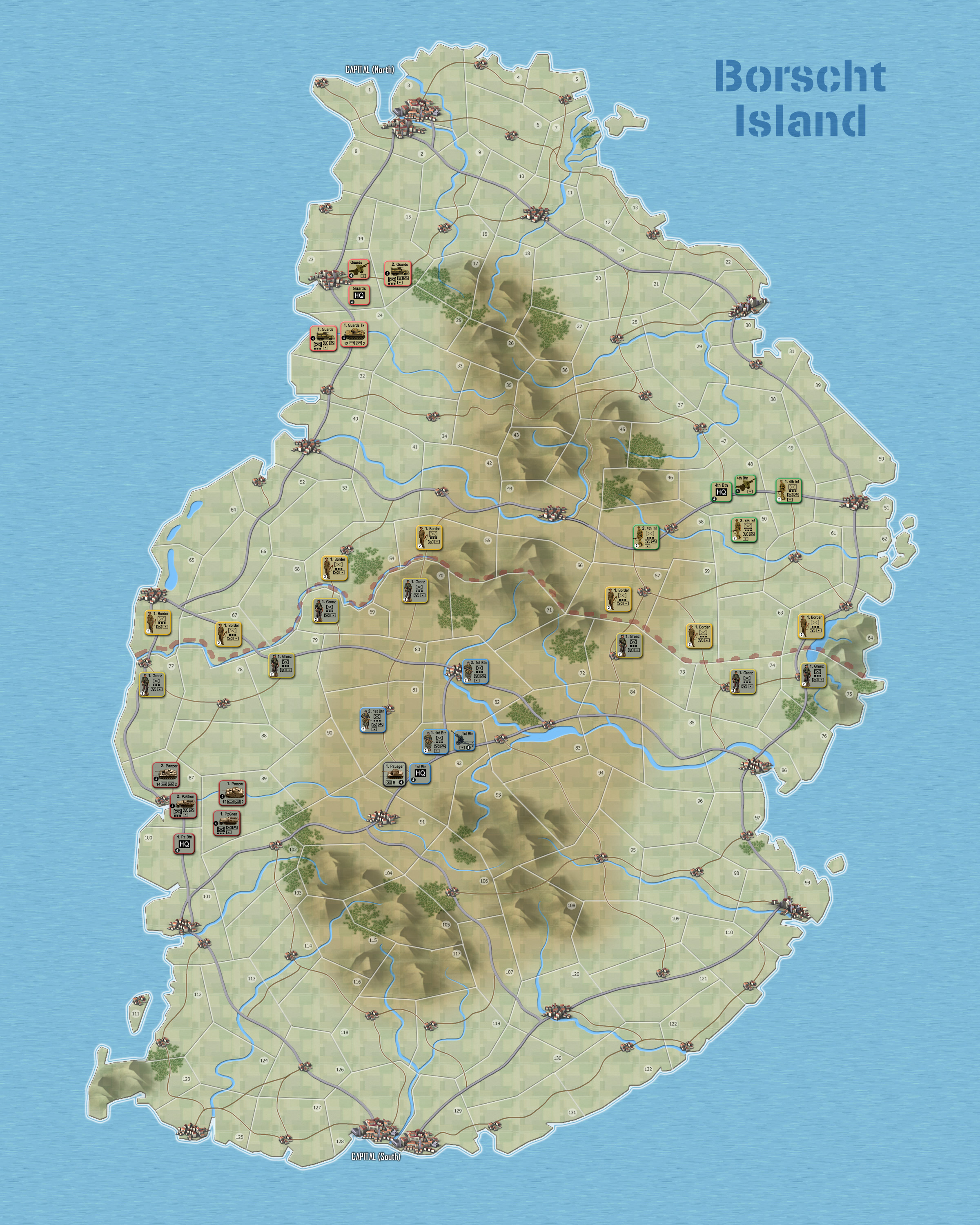 Formations are small, the basic CM combat unit are companies with support forces of artillery, AT, mortars and tank formations - casualties are tracked after each battle -- the CM battles would be limited to 30 to max 40 turns to keep things moving.

The strategic map has zones, not hexes and a custom CM battle maps will be built for each zone once a battle starts there (or existing QB maps adapted to fit), and a zone can remain contested for several battles if no side wins and outright victory there.

There'd be full FOW ... with GM's controlling flow of intel and players contributing to the intel with battlefield AAR's.

@Nathangun and I would be running things as GM's ... I'd be handling the map updates and counters etc, @Nathangun tracking the OOB's of all the units and we'll share map building (everyone remembers Nathangun's sterling work on his Battle of Bulge campaign)

Now -- here's the BIG question:
I'd like to play this in CMFI/GL starting in September 1943 -- one side using the Germans, the other the Brits/Commonwealth -- running through until maybe early 1944 winter.

I find this a very interesting period -- no big cats yet -- limited vehicle tank/gun OOB's to keep track of -- infantry AT weapons still very limited... and the CMFI maps just look good thematically.

Nathangun and I still have quite a lot of testing and developing to do, but would there be enough players interested in participating in something like this?

It's been fun building this so far ... but before we commit to any further work, gauging interest would be a good idea -- also if yes, which version of CM2 to use.
CMRT would be thematically fun, but is just possibly limited in terms of QB maps available to adapt.
P

Hehe I do remember the Onion wars... you know you can count me in!

why is it called onion wars?

why is it called onion wars?
Click to expand...

I don’t remember - maybe @Nathangun knows ... What I know of it had quite a bit of sense of humour to it.

Rico said:
I don’t remember - maybe @Nathangun knows ... What I know of it had quite a bit of sense of humour to it.
Click to expand...

Christ I don't know, who doesn't like onions?
Z


In answer to any of the questions in this thread
(<sigh> funny he thinks he is!!)

Is there a difference between a Campaign and a Meta Campaign?

Gunner said:
Is there a difference between a Campaign and a Meta Campaign?
Click to expand...

professional.xmaz said:
why is it called onion wars?
Click to expand...

I think this goes to the way back.
I believe the onionwars was a website that put together Combat Mission shyte.
I remember talk of it when We Band of Brothers were doing a lot of tournaments and campaigns using CM1.
Man, that was, like, over 10 years or more ago.

Edit: Yep, a quick search found this link:
http://www.onionwars.net/
It's no longer active though.
It seems to go back as far as 2003
P

It's been down for years.

Looks like an amazing idea! I'm looking forward to reading the forum posts about it

Development of this a bit of a stop-start affair as the usual and unusual RL and work issues raise their hands and demand attention. :shocknaz:

It never fails ... every time start tackling one of these bigge4 tourney/campaign projects ... RL and work curve balls just start firing off ... and it’s all I can do to keep attention on current gaming and things like the FOG campaign.

Maybe/hopefully find some time on Sunday to do some more work on this.
O