The map is roughly 1.5km (EW) by 1.2km (NS) with the main feature the intersection at the centre between the main EW highway and the NS one. The road has two carriageways each side plus central reservation and Hard Shoulder.

You can actually get a 1500m clean shot at game start East to West along the road.

Blue Edge is the west, which is partially bounded by a River running roughly NS.

Red Edge is the  East, which is partially bounded by a double rail line running NS.

The junction itself has eight slipways all identified but these were aids when building it and can be removed.

A combination of my lack of ability and the fact that I doubt something like this was ever intended mean that there are flaws in the road markings at various points. In addition the angled elements on bridges can feel awkward.

In the South parallel to the main EW route is the old road that it replaces.

There are a number of other key elements most of which are in themselves experiments and I would welcome comment from people.

In the SW corner I’ve tried to use footbridges and fences to try and create a sort of fishing station area, Not perfect but I am quite happy with it.

On the River North of the main EW highway, i’ve used ditch lock to try and create drainage channels into the river. This works well with trenches in SF but these aren’t available in BS.

On the East side of the NS Route in the North is a service area with Gas station, diner and Garage. It is probably too small but I was mostly trying to get the look and feel right and it feels okay to me. I did originally try and use a concrete bridge as a canopy for the pumps but it looked awful.

In the NE corner as a balance to the village in the SW, this should probably be bigger but as with the Services I was interested in feel and game play more than accuracy. You could probably make a full map rail yard.

In the South off the Old Road East of the NS route this is an attempt at a grand house with farm buildings and gardens.

Again probably should be bigger but I like it.

This should definitely be bigger and you could make a full quarry map but again I was more interested in playing with the idea so I would welcome comments on that too.

A general feature that people might notice is that I tend to use Light forest on field boundaries and raise the fence line about 1m above the fields. This is because living in the North of Scotland where fields have been ploughed for over a hundred years, over time edges become higher and overgrown so it feels more nature to me. 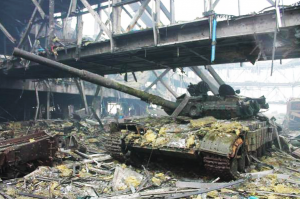 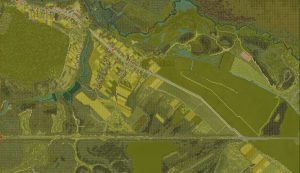 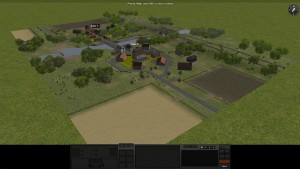