I always liked the .45 ACP lost count of how many I hand loaded. Here we see the Thompson wonder, or it had different specifications than the .45 ACP for handguns.

Excellent pic Louis.
Someday we need to an FGM Grand Tour and go see these places you have posted here.

The US pilot Howard Clayton Knotts (born on 1895 in Illinois) by 1918 had already destroyed six enemy aircraft and, therefore, had been credited as 'ace', when he was, in turn, shot down and taken prisoner on Oct 14, 1918. Even so, he managed to expand his record and add another seven destroyed enemy planes, unique in the annals of world aviation. 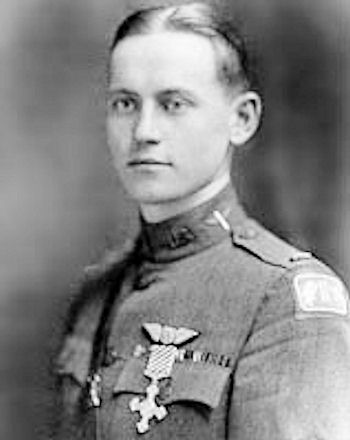 Knotts received training from the Royal Flying Corps in Toronto, Ontario and was then sent to Fort Worth, Texas on 5 November 1917. Promoted to 2nd Lieutenant on 4 Feb 1918, he was assigned to the 182nd Aero Squadron and sent to France on 2 May 1918. He was reassigned to the 17th Aero Squadron, attached to the 13th Wing of the RAF, on 14 Aug 1918. With this squadron he was wounded in action a week later on 21 Aug 1918. Knotts then shot down six enemy aircraft in less than a month flying the Sopwith Camel. Each of his opponents flew the Fokker D.VII.

On 14 Oct 1918, Knotts was shot down by ground fire during an attempt to strafe a machine gun nest. Wounded in the right foot, he landed safely behind German lines and shot it out with five enemy soldiers before being captured. Enroute to a German prison camp at Mons, he set fire to a supply train, effectively destroying several Fokkers destined for the front. Four days after his arrival at Mons, Knotts escaped from the camp but was recaptured a few hours later. He was later transferred to a prison camp at Soignies for the duration of the war. After the war he married on 1921. Knotts later became general counsel for the American Aeronautical Association. He died of a heart attack at the age of 47. 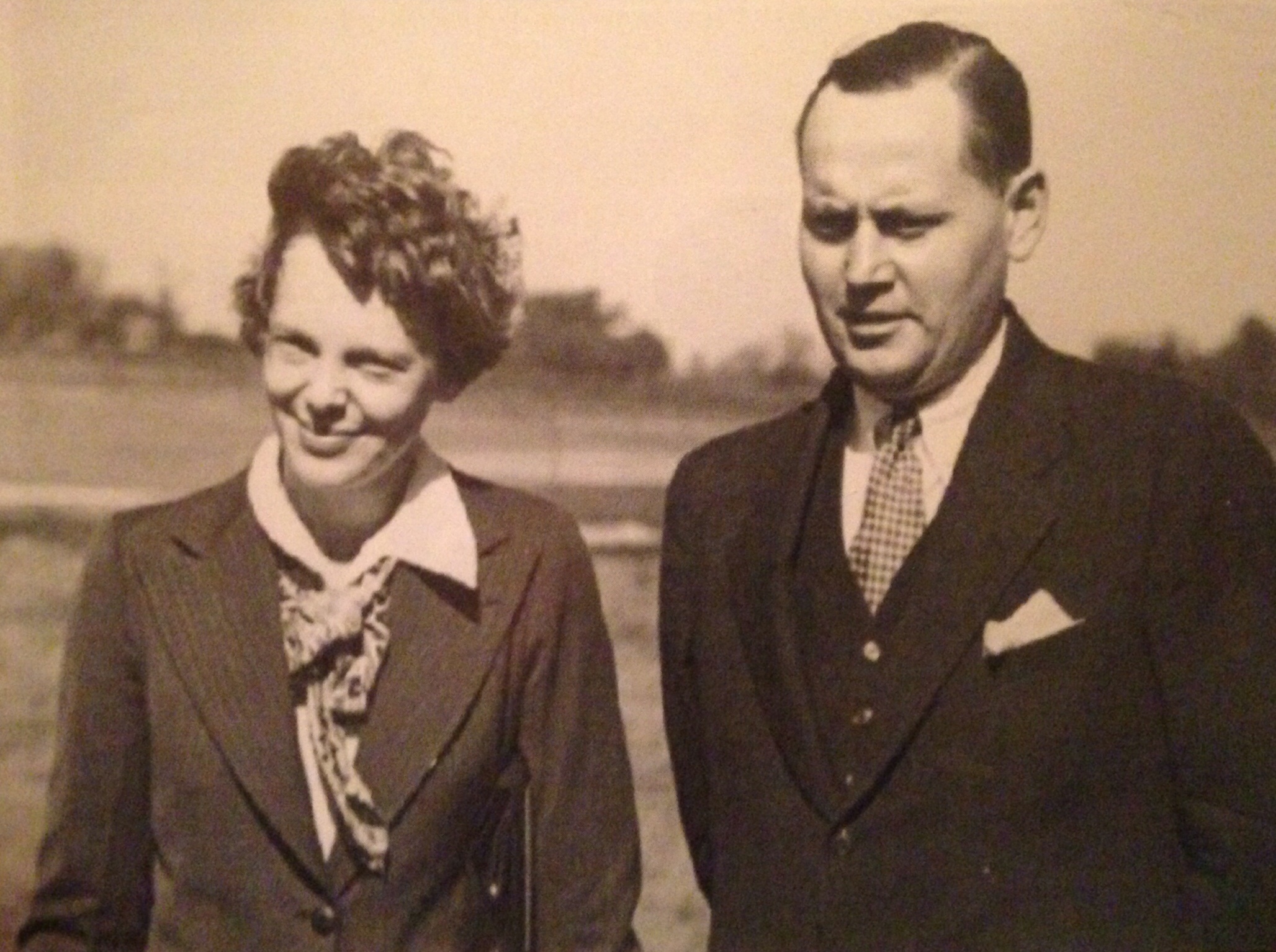 Amelia Earhart and Howard Knotts, during the rededication of the Springfield, Illinois Commercial Airport, Oct 21, 1934. 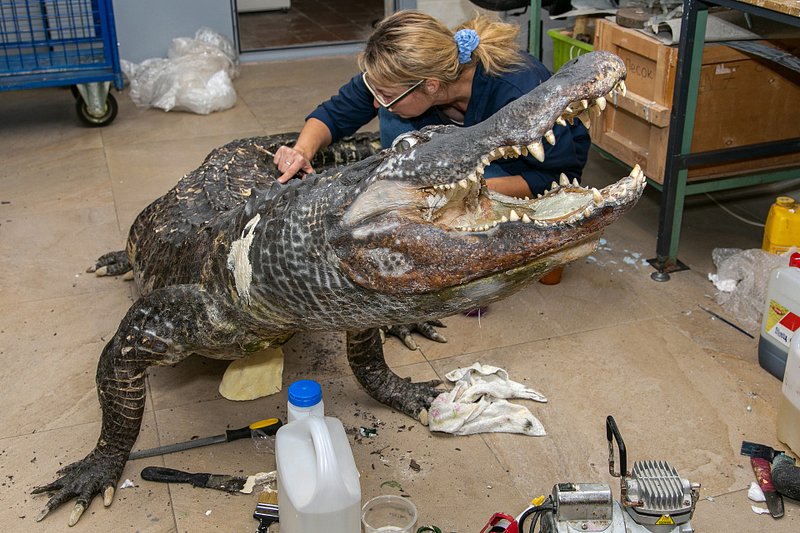 An alligator believed to have belonged to Adolf Hitler and that died aged 84 (May 2020) has been taxidermied and put on display in Moscow.
Born in the USA in 1936, Saturn was moved to the Berlin zoo where he escaped on November 23, 1943, after a bombing raid that killed several of his fellow reptiles. In 1946, he was found by British soldiers who handed him over to the Soviet authorities. His whereabouts during the intervening three years are "a mystery", the Moscow Zoo said when Saturn died on May 24, 2020.

When Saturn was brought to Moscow in July 1946, rumours began circulating that he had been part of Adolf Hitler's personal collection, the zoo said. Anyway since July 1946 the alligator has been a hit with visitors in Moscow.

Adolf Galland, during an interview a year before his death in 1995:

Journalist: Is it true that you had the only cigar lighterequipped Messerschmitt in the entire Luftwaffe?

Galland: I think so, plus a holder for it if I was on oxygen. It created quite a controversy, I can tell you... 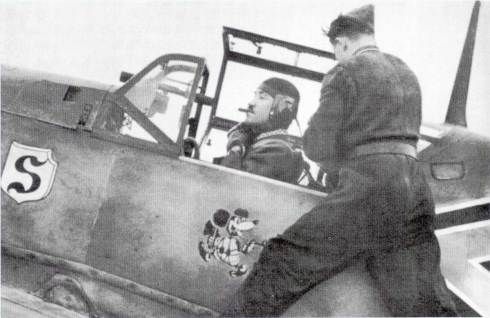 One of the many stories at Pearl Harbor...

The then Capt. Cassin Young (born on March 6, 1894) commanded the USS Vestal repair ship during the attack on Pearl Harbor on Dec 7, 1941. Young was in his cabin of him in the Vestal when the attack was launched. He ran to the deck, where he organized sailors to fire the ships' three-inch guns at the Japanese planes overheard. 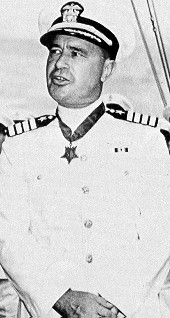 But Young was blown overboard, along with 100 other sailors, when the forward magazine of the famed USS Arizona battleship, which was next to the Vestal, was hit and exploded.

The Vestal's second in command ordered the remaining sailors to abandon ship, but Young swam through the oil slick water and climbed back aboard. "Where the hell do you men think you are going?" Young yelled at the sailors abandoning ship, shouting at them to go to their stations and get the ship underway.

The Vestal eventually made it out into open waters. Damaged and on fire, she ran aground. Young later received the Medal of Honor for his actions from him, and was promoted to captain of the heavy cruiser USS San Francisco (CA-38).

Precisely aboard the USS San Francisco during the Guadalcanal Campaign, on Nov 13, 1942, he guided his ship in action with a superior Japanese force and was killed by enemy shells while closely engaging the battleship Hiei. Cap Young was posthumously awarded the Navy Cross for his actions during the campaign and San Francisco received the Presidential Unit Citation.

In his honor, a destroyer was named the USS Cassin Young.

USS San Francisco (CA-38), a New Orleans-class cruiser, was the second ship of three of the United States Navy named after the city of San Francisco, California. Commissioned in 1934, she was one of the most decorated ships of World War II, earning 17 battle stars and the Presidential Unit Citation.

Like most of her sister ships, she saw extensive action during the Guadalcanal campaign, including the Battle of Cape Esperance and the Naval Battle of Guadalcanal, during which she was heavily damaged and her captain and admiral killed.

Decommissioned immediately after the end of the war, she was sold for scrap in 1959.

Her bridge wings, damaged during the Naval Battle of Guadalcanal and removed during repairs, are now mounted on a promontory in Golden Gate National Recreation Area. They are set on the great circle course from San Francisco to Guadalcanal. 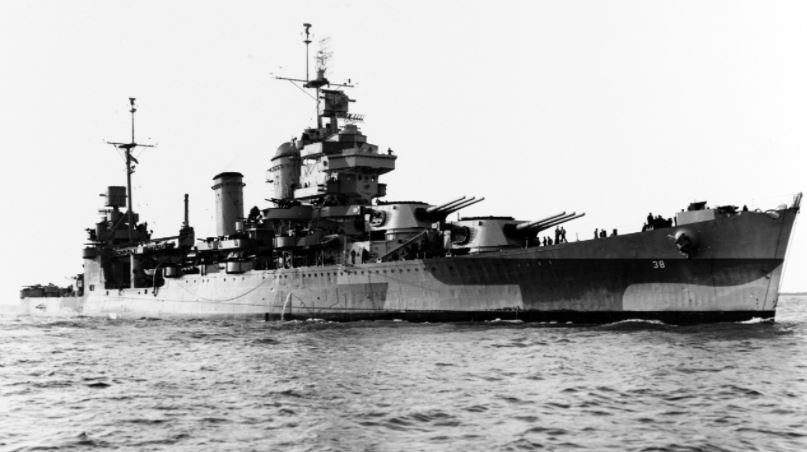 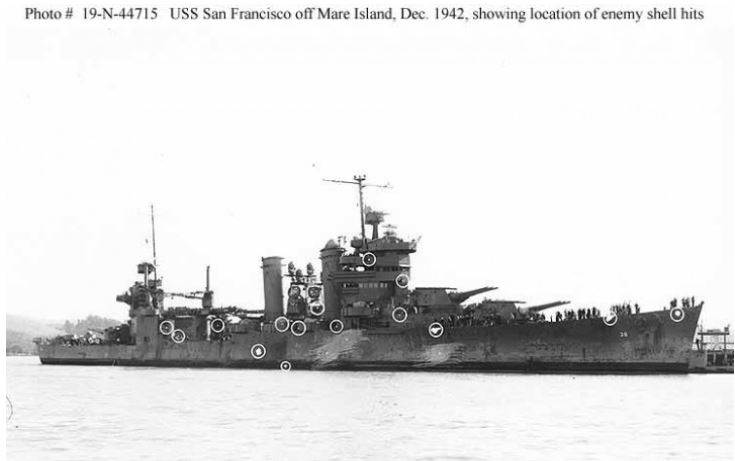 Bridge Wings at the at the Golden Gate National Recreation Area 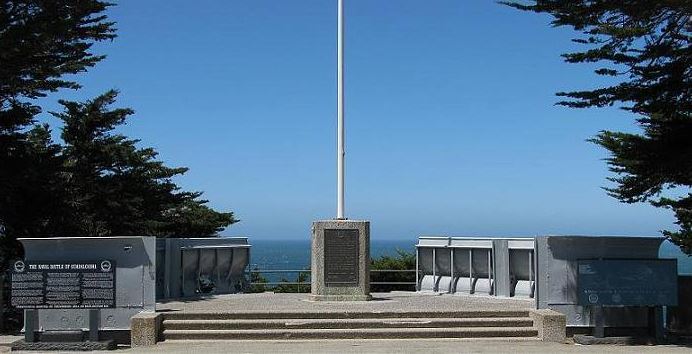 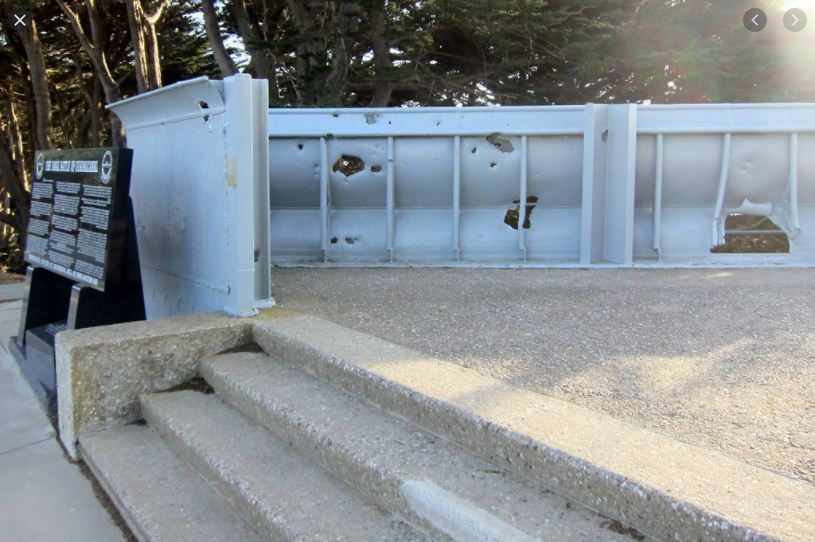 That yep was interesting Gunner!

Ensign George Gay Jr. (1917/1994), right, was the sole survivor of his torpedo bomber squadron that made the initial attack on Japanese aircraft carriers. in the Battle of Midway on June 4, 1942. In the pic in front of his Devastator aircraft with his rear gunner, ARM3c George Arthur Field, while USS Hornet was in the Coral Sea, c. May 1942. 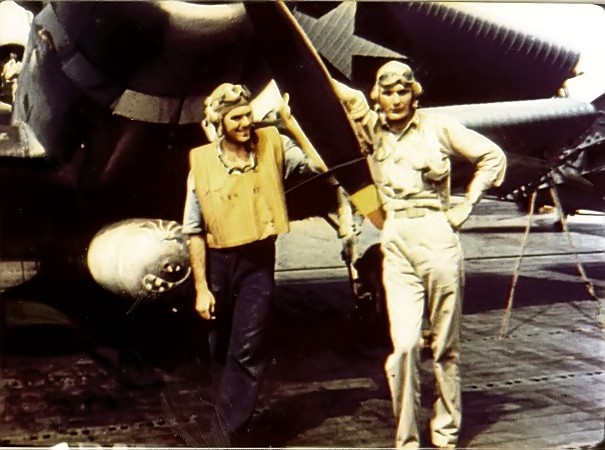 After his plane was shot down by Japanese fighters and he crashed in the water, Gay hid under his floating seat cushion to avoid Japanese strafing attacks.

He later remarked, "It's pretty hard to dig a foxhole in the water. They came by looking at me a number of times, but I kept real quiet and they just didn't know I was there."

Gay had a front-row seat on the destruction to follow with subsequent American aerial attacks. "I sat there and watched those things burning and blowing up all day and all night, and I saw those three carriers sink," he said.

Rescued after spending 30 hours in the water, Gay was well aware of just how lucky he'd been. Five other American fliers had been fished out of the ocean by the Japanese, according to Gay. They were interrogated, beaten and then tied up and thrown overboard.

He was awarded the Navy Cross, Purple Heart and Presidential Unit Citation for his actions in combat at Midway and was later awarded an Air Medal.

mTk said:
Where do we find such men?
Click to expand...

It's not a case of a greatest generation just a generation that had greatness thrust upon it.

Nathangun said:
It's not a case of a greatest generation just a generation that had greatness thrust upon it.
Click to expand...

The SS Ayrfield is one of many decommissioned ships in the Homebush Bay, just west of Sydney, but this with great foliage that adorns the rusted hull. Originally named SS Corrimal, the massive 1,140-tonne steel beast was built in 1911 in the UK and registered in Sydney in 1912 as a steam collier which was later used to transport supplies to American troops stationed in the Pacific region during WW2. On 1972, the SS Ayrfield was retired and sent to Homebush Bay which served as a ship-breaking yard.

Infamous maritime disasters, such as the sinking of the Titanic and the Lusitania, remain engraved in the annals of history and in people’s minds. However, Britain’s worst maritime disaster during WW2 was the sunk of RMS Lancastria.
In June 1940, the ocean liner Lancastria was bringing British soldiers home when it was bombed by the Germans near Saint-Nazaire. It took only 20 minutes for the massive ship to sink, causing the deaths of 4,000 people, including women and children. 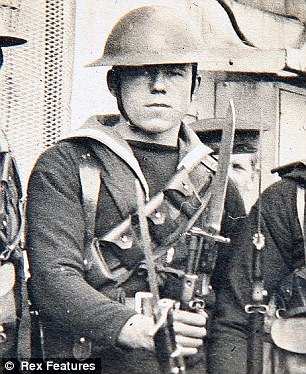 Claude Stanley Choules born in England on 3 March 1901 and spent his childhood years in and around the town. In 1915 and at the age of 14, pretending he was 16, he signed up to join the Royal Navy and to fight for his country in the WW1.

Choules was heavily decorated and led a distinguished career in the militiary which spanned over 40 years. In 1926 he transferred to the Royal Australian Navy where he served until he retired in 1956. He fought for his country in both world wars.

In recognition of his achievements the Royal Australian Navy named a landing ship after him: HMAS Choules.

I looked up the HMAS Choules thinking it would look like the LCT’s that landed on the Normandy beaches.
Man, I got to catch up with the 21st century.
Ships have gotten a bit bigger since then. 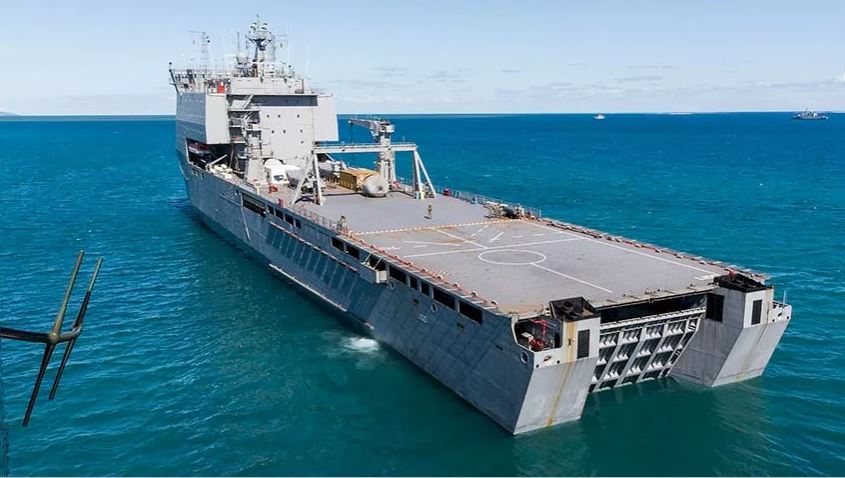 Actress Audrey Hepburn (really born Audrey Kathleen Ruston, Belgium, May 4, 1929 - Jan 20, 1993), one of the most iconic movie stars of the 20th century, winner of Academy, Tony, Grammy, and Emmy awards, helped the Resistance during WWII. In the autumn of 1944, she and her family kept a British paratrooper in their basement. By the following winter, they too would be living down there, wary to even crawl out of “bed” as the bombs fell on their small Dutch village of Velp. 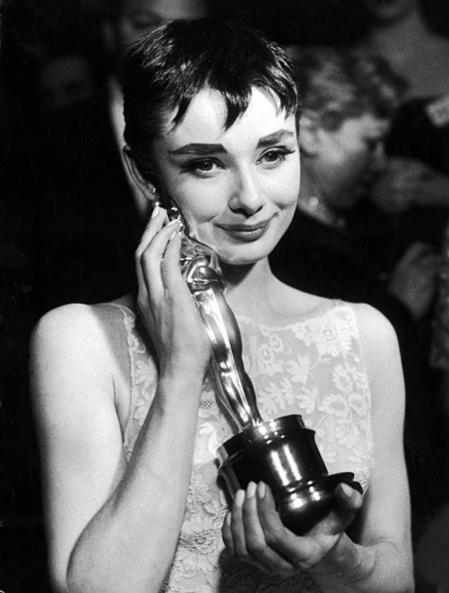 Hepburn's activism during WW II was always a part of her official biography. The actress moved to Holland during the war because her Dutch mother believed they would be safe in a country that had pledged to stay neutral. Like many other Dutch children, she occasionally acted as a courier, delivering papers and money from one group of resistance workers to another.

Later Hepburn's Hollywood handlers would publicize her bravery during the war, but they did their best to hide the fact that her parents were rooting for the Nazis. During the 1950s, it would have been disastrous for Hepburn's squeaky clean image if it were known that her parents were Nazi sympathizers. Yep, Hepburn's father, Joseph, who abandoned her when she was a little girl, and her mother, Ella, were members of the British Union of Fascists. After Hepburn’s parents divorced, Joseph was investigated by the British House of Commons for receiving seed money to start a newspaper from Germans with ties to Nazi propaganda minister Joseph Goebbels. He was imprisoned as an enemy of the state for the duration of the war.

Talk about succinct and to the point.

Imperial passport of Kublai Khan:
“I am the emissary of the Khan. If you defy me, you die.”
(This is one of two known passports).

IBM donated an International Translator System for use at the Nuremberg Trials, which brought the trial to life through simultaneous interpretation of English, Russian, French, and German delivered to 600 headsets with five audio channels. The first channel contained the verbatim transmission of the speaker. The other channels were translations in English, Russian, French, and German. Each participant in the trial had a set of headphones. There were six microphones placed in the courtroom—one for each judge, the witness stand, and the speaker's podium.

Later, IBM sold the proven system to the United Nations. 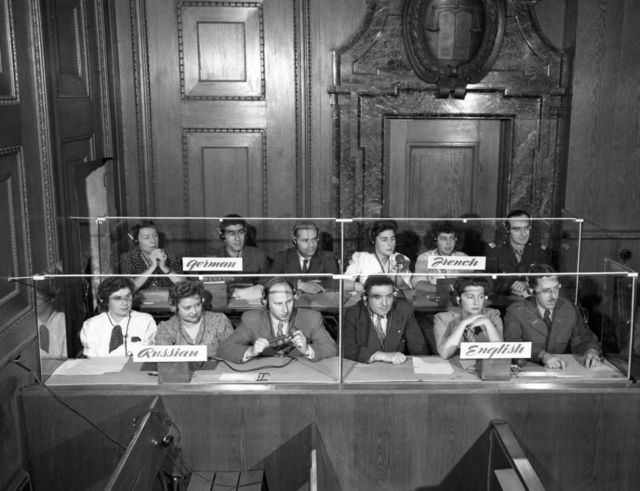