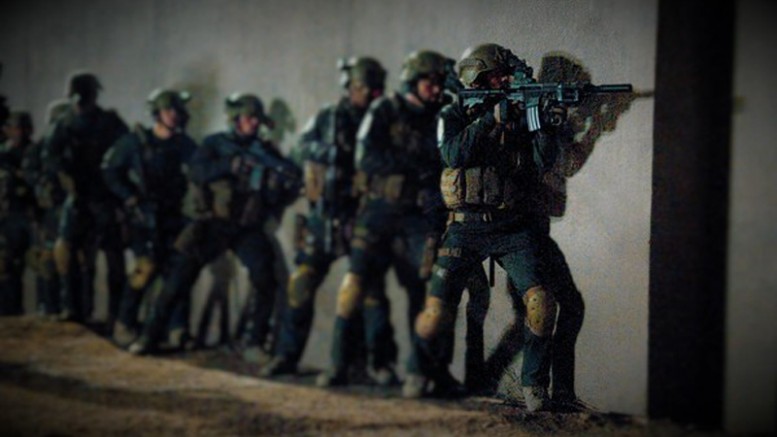 ***PROMOTED FROM THE PROVING GROUNDS***

The Rock is a fortress-prison connected to land only by a bridge. In the central cell of the “Rock” is held a very important asset of ours.

Our intelligence suggests that the garrison of the rock consists of two platoons or relatively inexperienced troops. A third platoon or so has established checkpoints and firing positions in the small village situated at the crossroads leading to the bridge. There should be some AFVs there as well. There is also an enemy QRF around 45 minutes away from the crossroad consisting of BMP-3s Your mission is to free the prisoner held on the Rock. Your forces A veteran infantry platoon approaching from the north is tasked with clearing the crossroads.

Three elite squads of Seal Team Six with three extra breach teams, a light MG and a sniper team will approach the Rock from the sea and climb on the south wall. They will be in position exactly ten (10) minutes after the commencement of the operation Twenty five minutes after the commencement of the operation a fleet of Humvees will arrive from the north of the highway. This gives you approximately 30 minutes to defeat the garrison of the rock, free the prisoner and clear the crossroads.

Once these tasks have been achieved half of the Humvees will reach the Rock and evacuate Seal Team Six and the prisoner and the rest will evacuate the platoon holding the crossroads, hopefully before QRF arrives. The bad news is that you are outnumbered. To counter this you must play your trumps with finesse: (a) the operation takes place during the night and under heavy rain. This will make your superior IR optics count especially if combined with smoke screens (b) The quality of your troops clearly supersedes that of the enemy. You should expect heavy losses during the mission but we confident that you will pull it through successfully at the end.